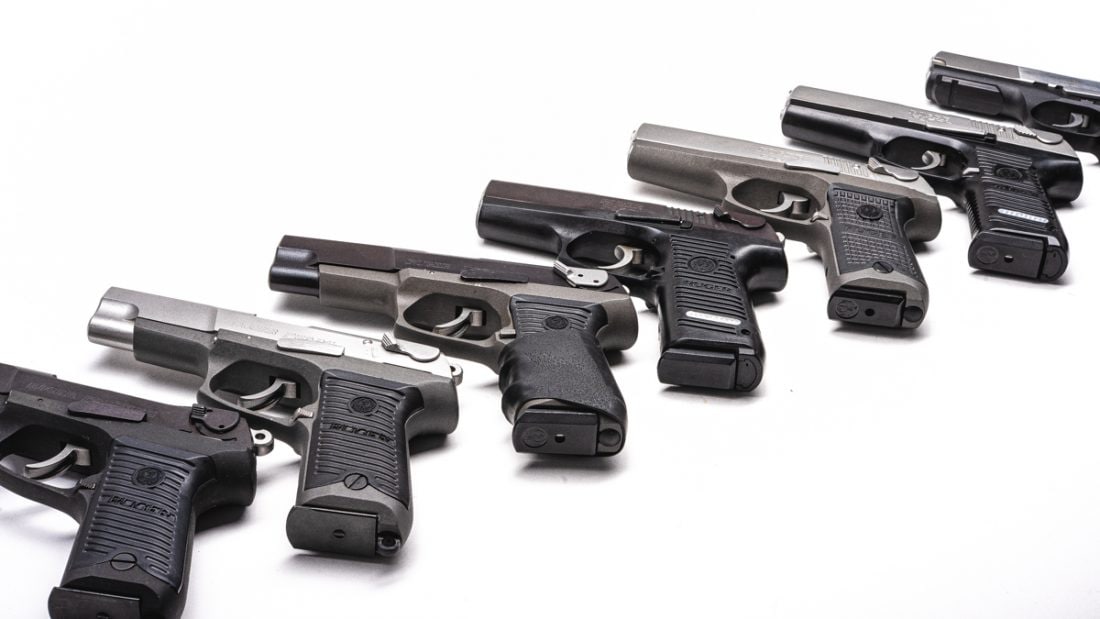 Introduced back when Atari was cutting edge, the Ruger P-85 and its descendants were the Connecticut-based gun maker’s contestant in the battle of the “wonder nines.” (Photo: Richard Taylor/Guns.com)

CHECK OUT OUR GREAT INVENTORY OF RUGER P SERIES PISTOLS

Bill Ruger had already made a name for his company by 1985 when it came to rifles, revolvers, and rimfires– then came the P-series pistols.

Although Ruger had missed the boat on the U.S. Air Force’s pistol replacement trials in the late 1970s, and the first couple rounds of the Army’s follow-on trails to phase out the M1911– all of which had been won by the Beretta 92– by 1985 company had a double-stack 9mm that would show up for the postscript XM10 pistol trials.

Ruger’s first production centerfire semi-automatic pistol, the P-85, had a lot going on. Using an aluminum alloy frame, stainless barrel, and cast steel slide, the 15+1 shot semi-auto was designed as a combat handgun in an era that had little competition. Double action/single action with an oversized trigger guard and an ambi magazine release, the P-85 was comparable to early “wonder nines” like the S&W 459 and then only recently introduced Sig P226 and Glock 17.

Unlike the Glock, the Ruger pistol was hammer-fired and had molded G.E. Xenoy grip panels. Using a 4.5-inch barrel, weight was 32-ounces overall. 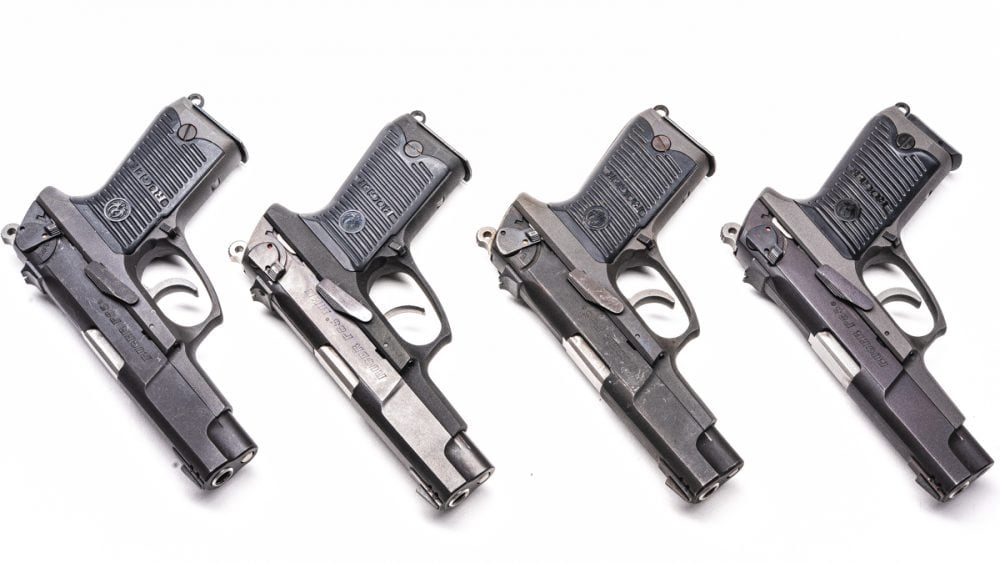 A short recoil-operated, locked-breech pistol that was more modern than guns like the Browning Hi-Power, the Ruger P-85 was a U.S.-made answer in the late 1980s to European imports like the Beretta 92, CZ 75, Glock 17 and Sig P226. 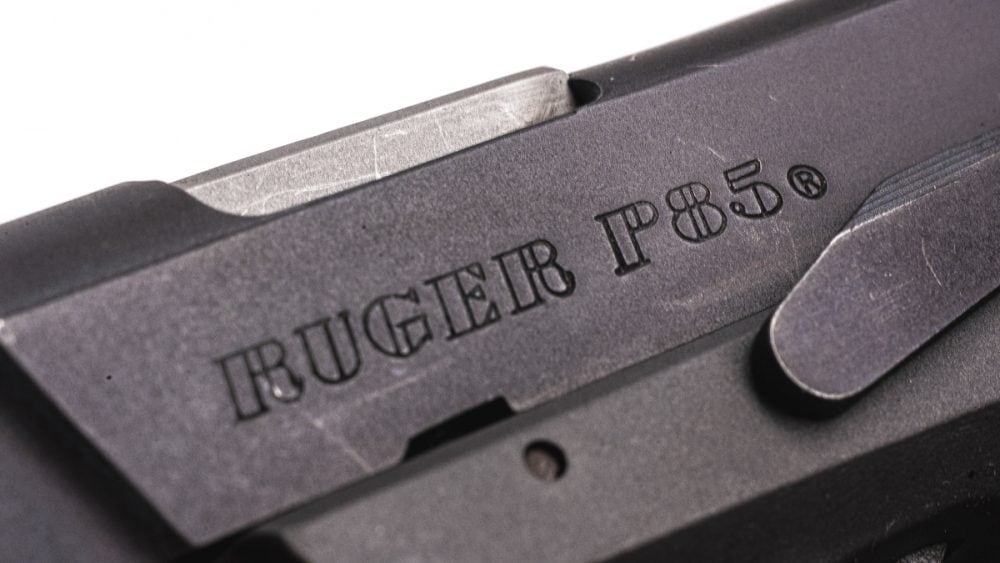 The bad news on the Army contract was that Beretta made it a clean sweep on the XM10 trials, repeating their earlier wins, which kept the P-85 out of the hands of the U.S. military. However, in 1987, Ruger offered their new gun to the public with a (suggested) retail price when introduced of $305, complete with a plastic case and spare magazine. They proved popular in the consumer market and even saw some brisk police sales in its day. 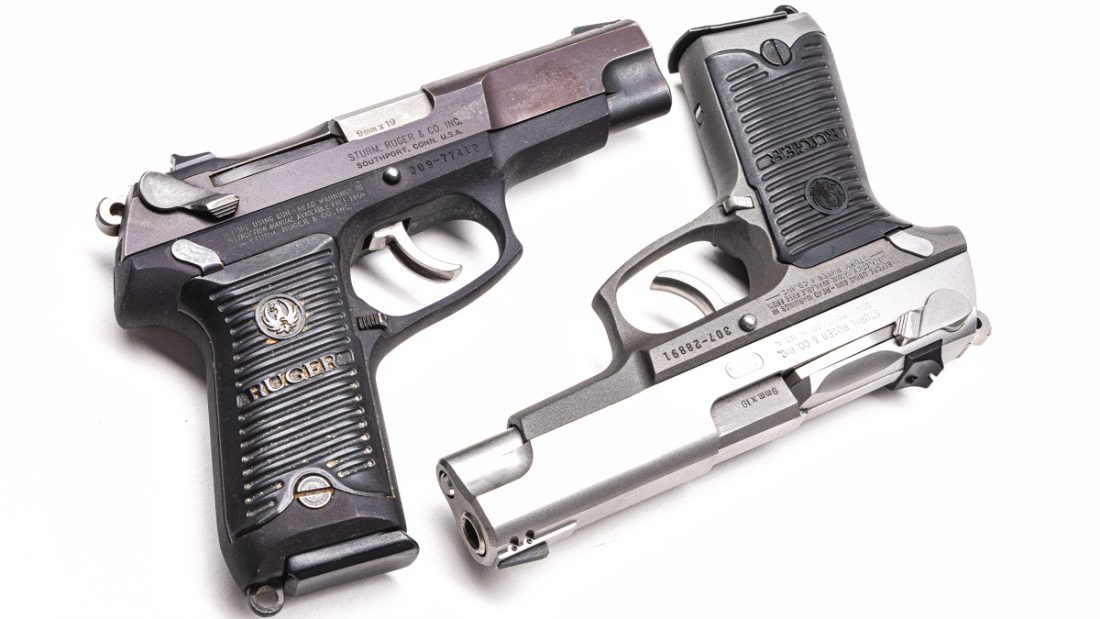 The P-89 and stainless KP-89 replaced the P-85 and remained in production until 2009. As typical in a handgun originally designed for a military contract, the lanyard ring in the heel was standard throughout most of the series production (Photo: Richard Taylor/Guns.com) 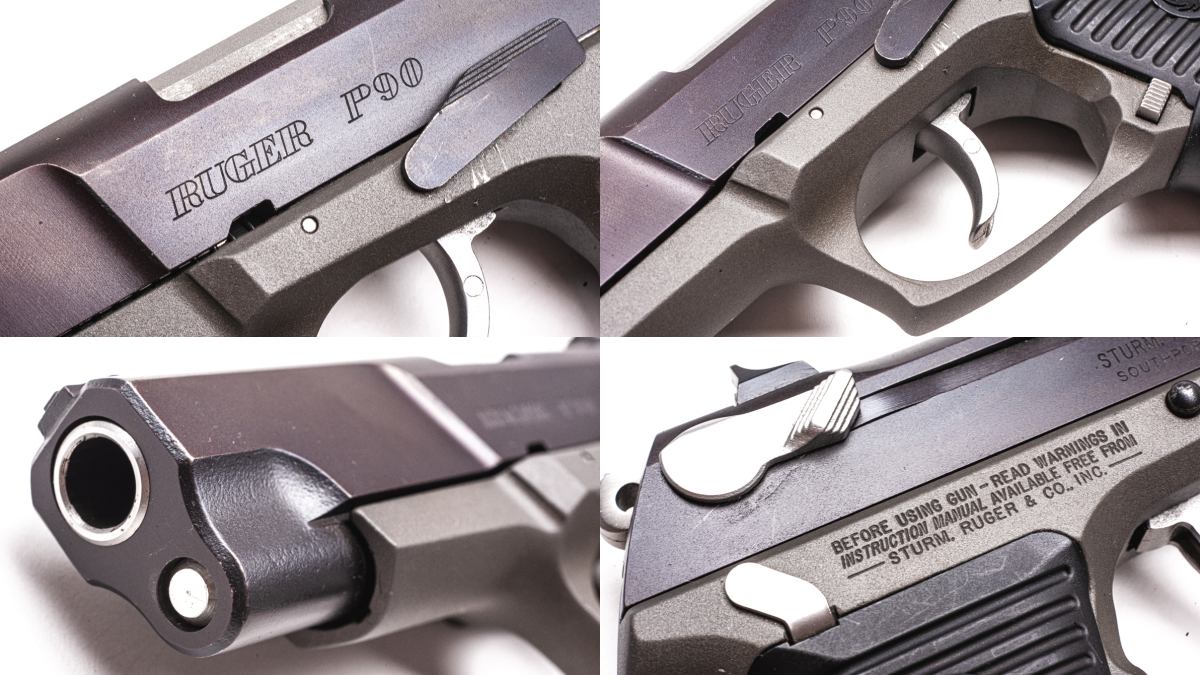 The P90 was a .45ACP upgrade from the 9mm P85/89 guns. The 8+1 capacity gun was produced for a number of government contracts in addition to consumer sales (Photo: Richard Taylor/Guns.com)

By 1995, the aluminum frame was swapped out for a polymer one to save a few ounces and the P95/KP95 was born. While the P-85 never suited up for military service, the later P95 was sold in small numbers to the U.S. Army for secondary service and several were also later adopted by the post-Saddam Iraqi forces. 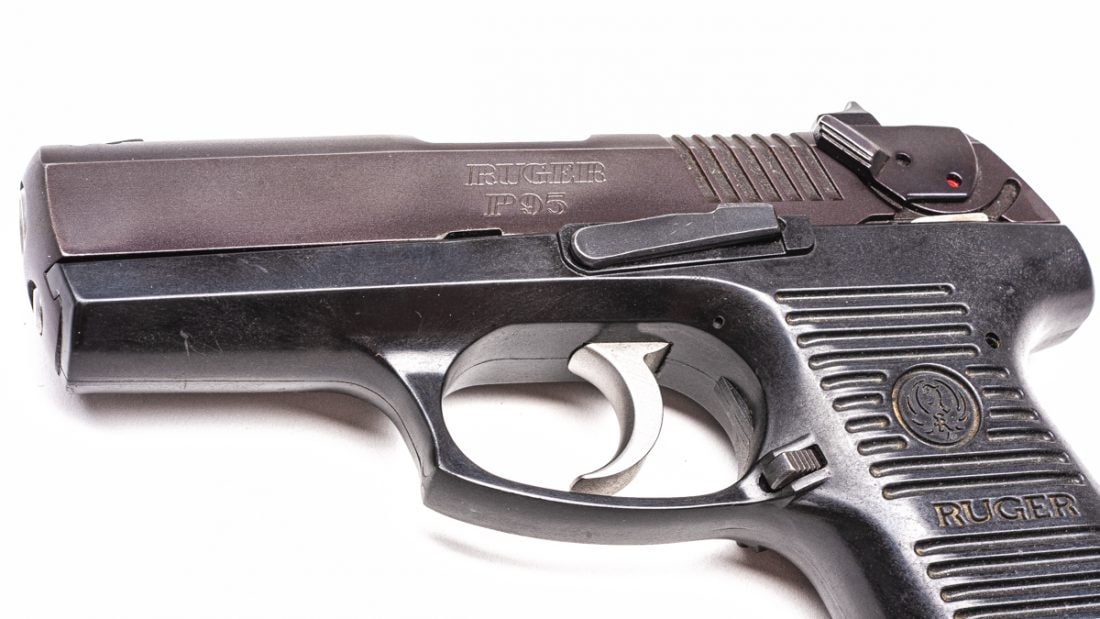 The polymer-framed Ruger P95 was introduced a decade into the P-series run. (Photo: Richard Taylor/Guns.com)

An effort to slim the downright chunky pistol series came about in 2005, some two decades after the P-85 was originally developed. This resulted in the P345 which deleted the lanyard ring, featured polyurethane grips and a slimmer frame as well as bringing the option for a dustcover-mounted accessory rail. The swan song in P-series development, the gun would hint heavily at the later SR-series pistols that Ruger would put into production in late 2007. 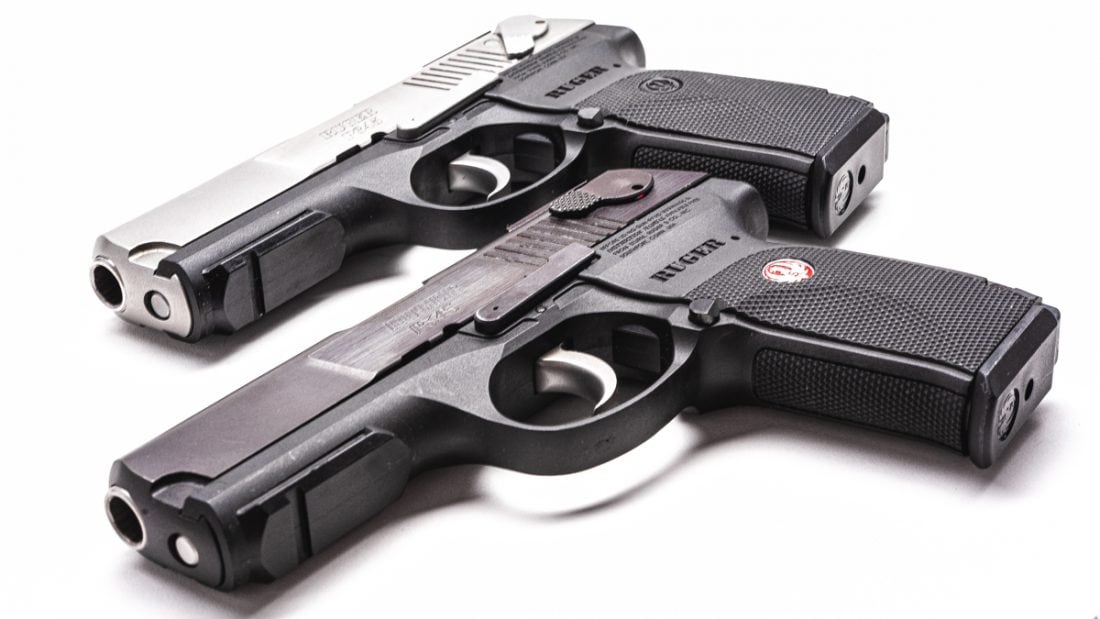 In the Ruger P345, you can see how the original concept had morphed into something that was closer to the SR pistols that would replace the line beginning in 2007. (Photo: Richard Taylor/Guns.com)

Gradually, the P-series disappeared from Ruger’s catalog altogether, with the P-95 lingering on until 2013. Still, it was a good run that the company has followed up on with not only their SR-series pistols but also the more current Ruger American and Security-9. 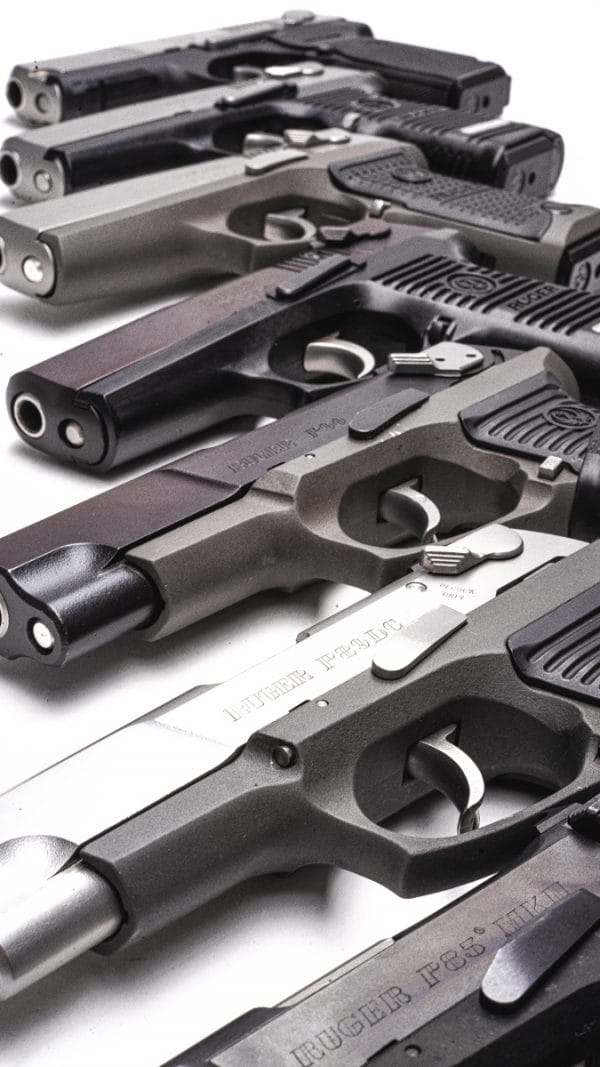 The P-series guns looked kinda clunky but earned a reputation for reliability and durability. In all, they were in commercial production for over 25 years. (Photo: Richard Taylor/Guns.com)

Nonetheless, those looking for an affordable and hardwearing pistol would be well-served to grab an old Ruger P85, P90, or P95 before nostalgia kicks in and they suffer the price increase that comes with collectibility. 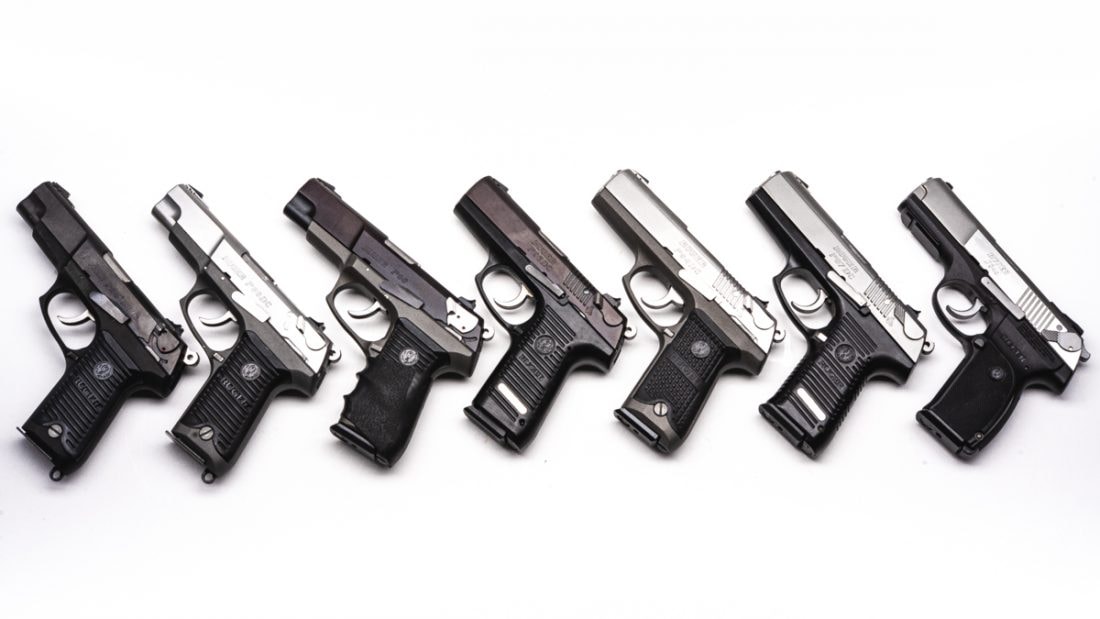 And we always have a nice selection on hand in the Guns.com Vault of Certified Used Guns. (Photo: Richard Taylor/Guns.com)

CHECK OUT OUR GREAT INVENTORY OF RUGER P SERIES PISTOLS