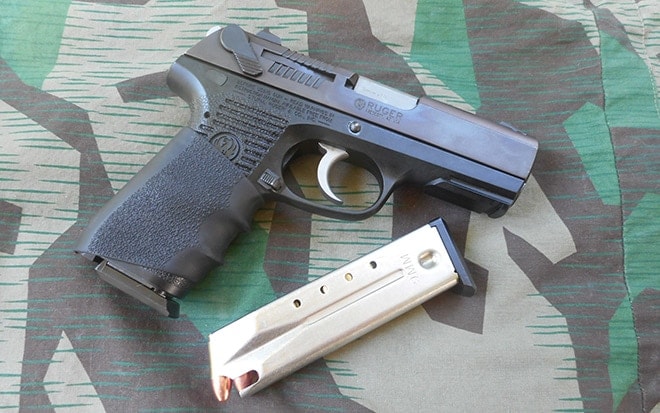 Two-thousand thirteen was a tumultuous year for firearm owners to say the least. From proposed legislation to ammo shortages and panic buying, there was no lack of news for the average gun guy. Yet one piece of news was overlooked then and still is when people remember those dark days— in October of that fateful year, Ruger quietly pulled the P95 from their website and discontinued the once stalwart handgun.

It was a sad end to a loyal soldier, one that no doubt earned Ruger quite a bit of money. With a lineage stretching back to 1985 and Bill Ruger’s never-ending desire to land a major military contract, it seems tragic to me that the old P95 is now out of production, a once proud line of handguns, consigned to the history books and used gun cases around the nation.

Ruger’s P-Series of handguns were developed in the first half of the 1980s. With the US Army expressing interest in a new service handgun, nearly every major handgun manufacturer jumped at the opportunity. Ruger was no different and as their marketing material boasted: “Ruger’s engineers were handed a clean slate to design the ultimate service handgun.” 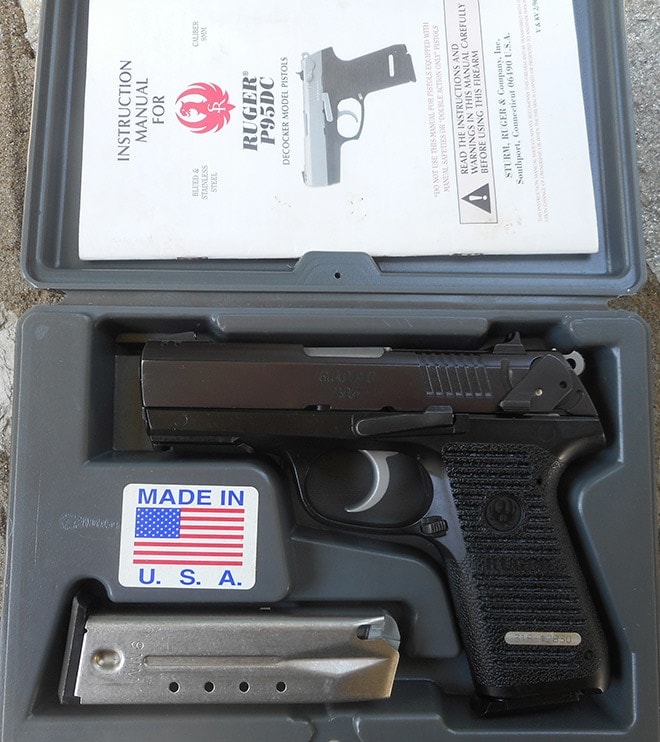 Ruger, like so many other companies, entered into the XM9 competition and there are varying accounts as to why Ruger’s handgun wasn’t selected. One narrative goes that Ruger didn’t enter the competition on time or that they felt the design needed more time to be perfected and decided against entering all together. Regardless, Bill Ruger’s dreams of a major US Army contract were once again dashed. The pistol was eventually released to the civilian market as the P85.

In a way, history has repeated itself with Ruger deciding against entering the latest pistol selection, the US Army’s XM17 Modular Handgun System competition. Though they developed a handgun for the competition to the US Army’s guidelines, they felt it wasn’t financially viable and released the now named Ruger American Handgun straight to the civilian market. 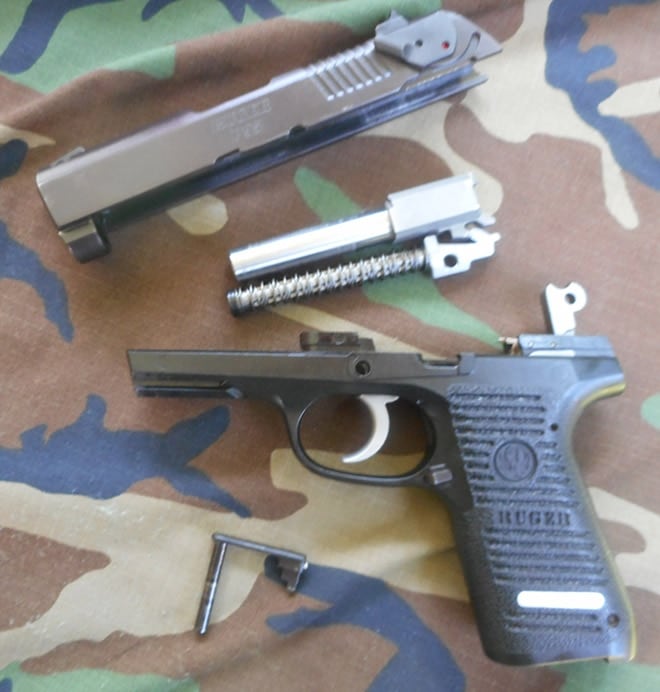 Disassembly is easy and simple for the average shooter. (Photo: Francis Borek)

Ruger would eventually discover a defect with the P85’s firing pin after complaints of the pin breaking during use. A redesign was initiated and Ruger unveiled the P89 as an improved design. A year later, Ruger unveiled a scaled up P89 chambered in .45 ACP and dubbed it the P90. Both the P85 and the P89/90 had a futuristic aesthetic that I have seen described as a “sci-fi blaster.”  As if to drive home this point, the P89 was once featured in the sci-fi show Cowboy Bebop. Ruger’s engineers would redesign the P89 to utilize a polymer frame to cut back on production costs and weight. This brings us to the P95 — a design that would also be scaled up for .45 ACP and dubbed the P97.

The P95 is rather conventional in operation. It is a hammer-fired, double/single action design with a slide mounted safety/decocker. This feature is obviously a holdover from the XM9 trials, and was quite en vogue for the era. It’s large and easy enough to hit with my thumb, though I do have to shift my grip slightly when doing so. The slide is big and bulky, something to be expected when dealing with Ruger’s overbuilt handguns. The sights are a typical white three-dot sighting system, nothing too special. For extra insurance I suppose, the front sight blade is held in place with two pins instead of the one seen on most other handguns. 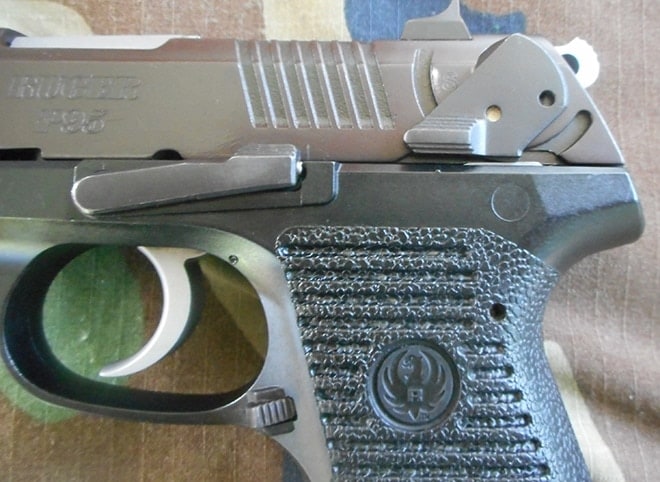 The safety de-cocker was quite en vogue back in the day. En vogue with gun makers, not the shooting public. (Photo: Francis Borek)

The barrel is 4 inches, so it straddles the line between full size and compact handguns. Unfortunately the reduced barrel length means that the “sci-fi blaster” aesthetic is now gone. To make up for it, the slide is finished in that weird Ruger bluing that has turned purple. A rather common sight with older Rugers, it is believed to be the bluing formula reacting with Ruger’s choice of investment casted steel. Much like this pistol however, the days of purple Rugers are gone.

The grip frame is black polymer and features a railed dust cover. Unlike many other polymer frames, Ruger’s engineers overbuilt the frame as well and there are no steel reinforcements on the slide rails, which helps to control the weight. The frame however is bulky enough that the pistol doesn’t feel too unbalanced. 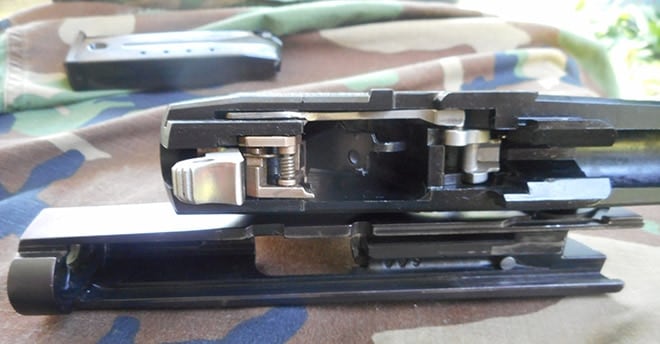 Like today’s S&W M&P, you have to lower the extractor in order to remove the slide off of the frame. (Photo: Francis Borek)

One of the most recognizable features of the P-Series are the grips. They feature large horizontal serrations and are textured to provide traction. Removeable in earlier models, they are molded into the frame for the P95. This means that you’re kind of stuck with the feel of the grip frame, unlike other handguns. Hogue does sell wrap around rubber grips that change the feel, but they are a pain in the rear to install.

Another bit of Ruger uniqueness is the ambidextrous mag release. It’s not a button nor a paddle release to be depressed. It is a textured, raised button that is pressed forward slightly to drop the mag. It is a bit strange and takes some getting used to. However with practice, one can easily use their trigger finger to hit the button and drop the magazine. Speaking of magazines, they have a capacity of 15 rounds, despite the large dimple at the bottom giving it the impression of a ban-era mag holding only 10.

On the range the Ruger feels like a bit of a brick in the hand, but that could just be me. The slide isn’t tough to rack, but like all pistols with a slide mounted safety/decocker, it is possible to unintentionally hit it while racking the slide. The trigger is perfectly acceptable for a massive service handgun. Double action is heavy and long, while single action is around 5 pounds with an unexpectedly crisp break. The sights are simple, non adjustable three dot sights which are adequate for whatever job the owner should choose for the gun. 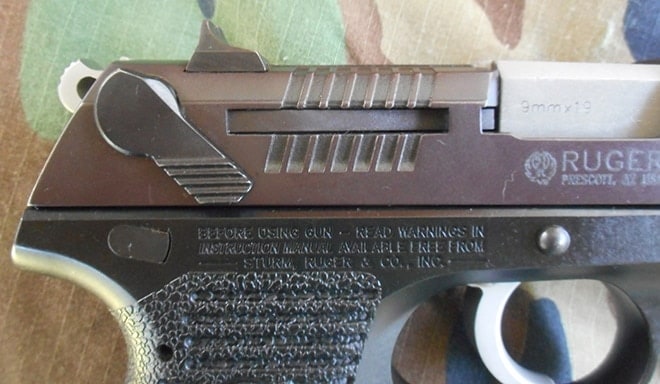 A reliable pistol in 9mm, accuracy is a matter of the shooter.

Though no longer in production, the Ruger P95 is a common sight on the secondary market. Often these pistols can be purchased for pennies when compared to newer handguns and are just as serviceable as anything else. For a budget minded shooter, a handgun with a 15-round capacity and tank-like durability with an often $300 price-tag is nothing to turn your nose up at.

Like the Sig Sauer SP2022, the US Army’s Rock Island Arsenal purchased several thousand P95s to help rearm the beleaguered Iraqi Army and National Police and in a way, Bill Ruger’s dream of having one of his guns being purchased by the US Army came true. The Ruger P95 may no longer be in production, but they’re a common and inexpensive sight in stores. If you’re on a budget, but need a good handgun, then the old P95 might just be for you.