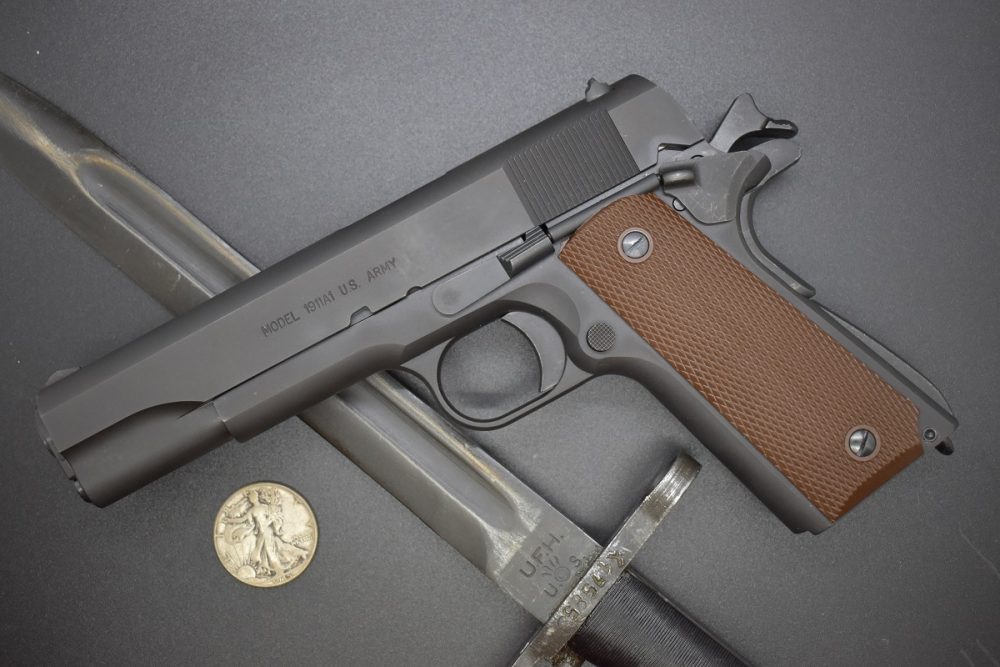 Auto-Ordnance’s 1911BKO has been on the market for a couple of years and is among the best choices for those looking for a well-made “GI 45” that is produced in America and doesn’t break the bank. (Photo: Chris Eger/Guns.com)

Those searching for a good deal on a standard GI-style 1911 should look at Auto-Ordnance’s American-made offering.

Adopted as “Pistol, Automatic, Caliber .45, M1911,” in 1911 after an extended period of trials and competition that saw handguns submitted not only Bergman, Luger, Savage, Webley-Fosbery and others, John Moses Browning’s semi-automatic .45ACP handgun was the U.S. military’s “Government Issue” pistol for 75 years.

The M1911A1 series, a standard introduced in 1924, utilized several modifications over Browning’s original GI long slide of the Great War-era. These included a shorter trigger with a relief cut to the rear of the guard, a longer grip safety spur, thicker front sights, and an arched mainspring housing rather than the M1911’s initial flat housing. While legacy models were subsequently reworked in Army arsenals at Springfield, Rock Island, Anniston and Augusta, a process that typically included picking up a parkerized finish over the original blue-to-black finishes, new guns ordered after 1925 would be delivered from the factory to the “A1” standard. This included pistols not only made by Colt, but also World War II-era guns cranked out by Remington-Rand, Ithaca, US&S, and Singer through 1945. 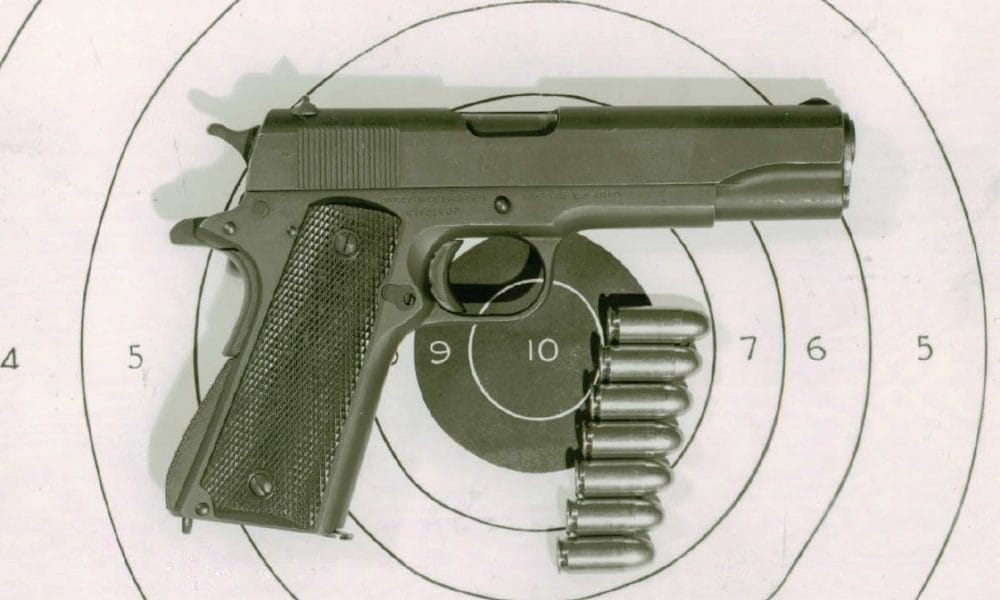 The standard GI .45, as seen in this 1950s-era archival photo of an M1911A1 from the Springfield Armory National Historic Site.

It is this latter model– which was carried by GIs, Marines, Sailors, Airmen, and Coasties through WWII, Korea, Vietnam, and the Cold War– that Auto-Ordnance’s 1911 BKO means to faithfully replicate. The Auto-Ordnance incorporates GI specs, with a standard 5-inch barrel and an 8.5-inch overall length. The “BKO” means a black oxide finish on the frame, barrel, and slide. 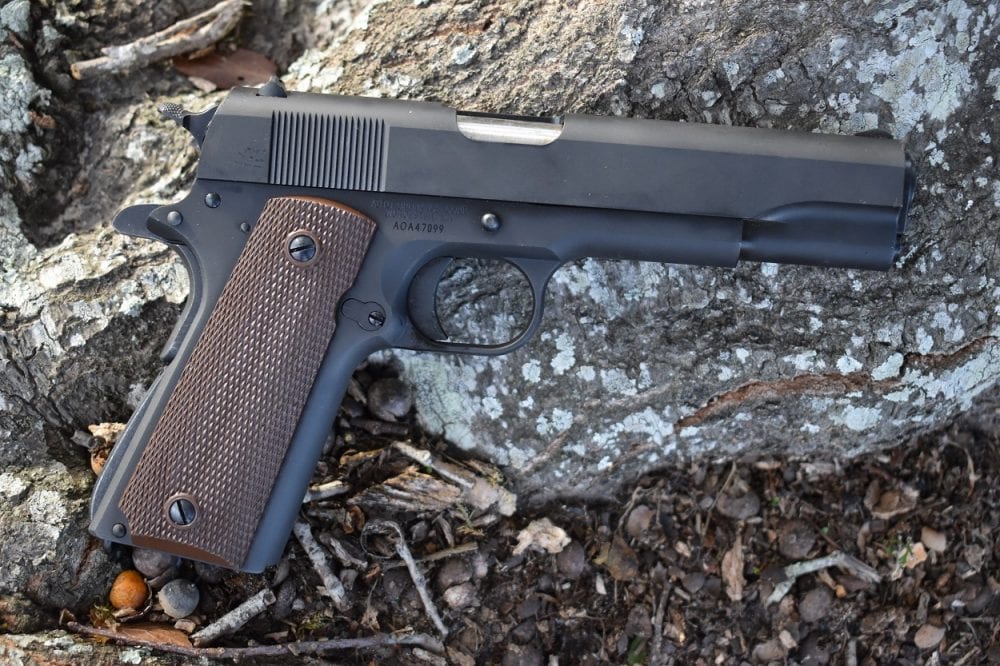 Auto-Ordnance tells us this gun was pulled randomly from their production line this month (Photo: Chris Eger/Guns.com)

When it comes to materials, AO machines the slide, sear, and disconnector from solid carbon bar stock, then heat treats them “to assure durability and long life over many thousands of rounds.” As with the old-school GI guns, the 1911 BKO has a low-profile blade front sight and a rear sight, with the latter being drift adjustable for windage. The grip is brown checkered plastic on the review gun, a veritable clone of the WWII-era 1911 grips that were adopted after the earlier “double-diamond” walnut grips were discontinued before WWII. For those who want “US” stamped wood DDs, AO also markets a version of the BKO with such panels which runs about $30 more.

How does it compare externally to a WWII GI 1911? Check out this comparison: 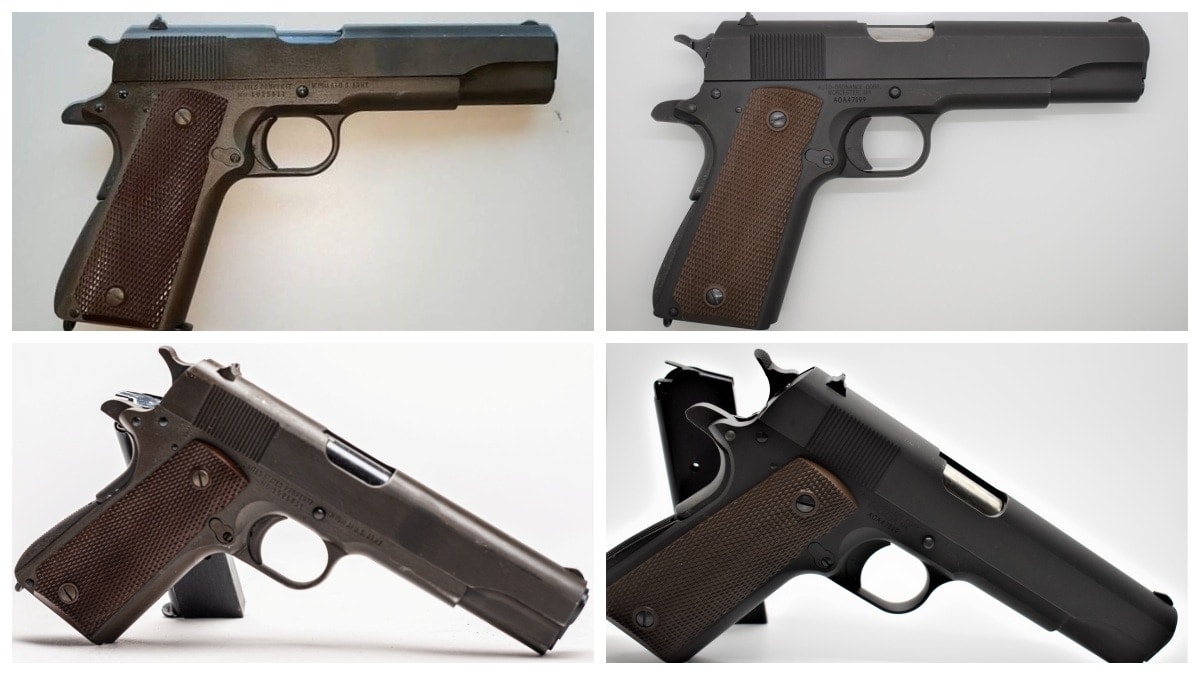 On the left, we have images of a beautiful correct Remington-Rand M1911A1 that was produced in 1943. On the right is a new Auto-Ordnance 1911BKO that came from the company’s Worcester, Massachusetts much more recently (Photo: Richard Taylor & Chris Eger/Guns.com)

Internally, you have much as you would expect on a modern M1911. Of note, the gun is an 80-series and uses a firing pin block.

The original Auto-Ordnance Corporation, famous for being the company created by Army Ordnance Col. John Taliaferro Thompson in August 1916, would market the Colonel’s namesake “trench broom” submachine gun starting in 1921. Going on to gain fame during Prohibition and the 1930s as makers of the “Tommy Gun,” AO contracted with Colt to craft early models until WWII prompted the company to open its first in-house production facility, in Bridgeport, Connecticut, in 1941. The war led to more than a half-million M1928 and M1/M1A1s produced by Auto-Ordnance for immediate military service with other models made under contract by Savage. However, after the conflict ended and demand dried up, the Connecticut factory closed its doors.

In the intervening years, Gun Parts Corp acquired the assets of the defunct historical AO in 1950 and spent the next four decades assembling small lots of Tommy guns, a practice that ended with the Hughes Amendment in 1986. By 1991, Auto-Ordnance was located in West Hurley, New York, and was producing an array of M1911-style pistols to mixed reviews.

In 1999, the Kahr Firearms Group acquired the name and, moving production to its current Worcester, Mass facility, has been going strong with a variety of Thompson-branded M1927 style semi-auto carbines and pistols, M1 Carbines, as well as a rebooted M1911A1 line.

Kahr’s founder and CEO Justin Moon said that his good fortune to steer a reinvigorated Auto-Ordnance into the 21st Century was, “a chance to become involved in preserving an essential part of American heritage.” Moon, who has a passion for American history, explained that “Our nation was founded by brave patriots who were willing to take risks, face dangers, and use their inventiveness to overcome all obstacles. Among those many tools used to found our country were the firearms that secured our freedom.”

Currently headquartered in Greely, Pennsylvania, all Kahr Arms, and Auto-Ordnance guns are proudly made in the United States. The company also owns Magnum Research, which recently moved production of the famed Desert Eagle back to the U.S. after a 10-year effort.

Now Back to Our Gun

While AO introduced a 9mm version of the 1911BKO a few years back, our test gun is a more standard .45ACP variety, complete with a 1911-pattern 7-round single stack GI-style magazine produced by Checkmate Industries. Ejection is positive with the left-side mounted magazine release and should be considered a drop-free mag. We tried the gun with several Vietnam-era Assy-marked GI mags as well as aftermarket 7- and 8-shot mags from the likes of Novak, Chip McCormick, Wilson Tactical and others and had no reportable issue. 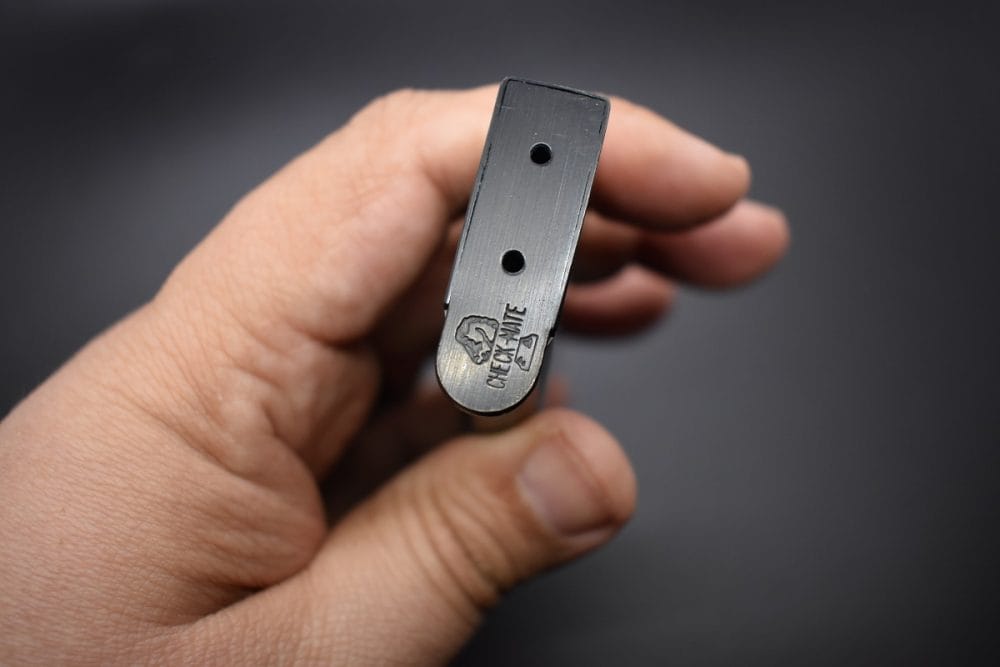 Check-Mate has long been in the mag biz. The 1911BKO shipped with one.  (Photo: Chris Eger/Guns.com)

The mainspring housing includes a lanyard ring oriented to the bottom of the grip, but we found it did not interfere with magazines, even those with extended base pads. We would have liked it to ship with more mags, but if you can’t find good new M1911 mags for about $20, you just aren’t looking.

A “no-frills” design, the test pistol includes the familiar Browning-designed frame-mounted thumb safety, and grip safety. It also has a later 80-series firing pin block for added drop safety, a feature sure to draw grumbles from those who prefer 70-series guns. Of note, the 1911BKO is Massachusetts-compliant. 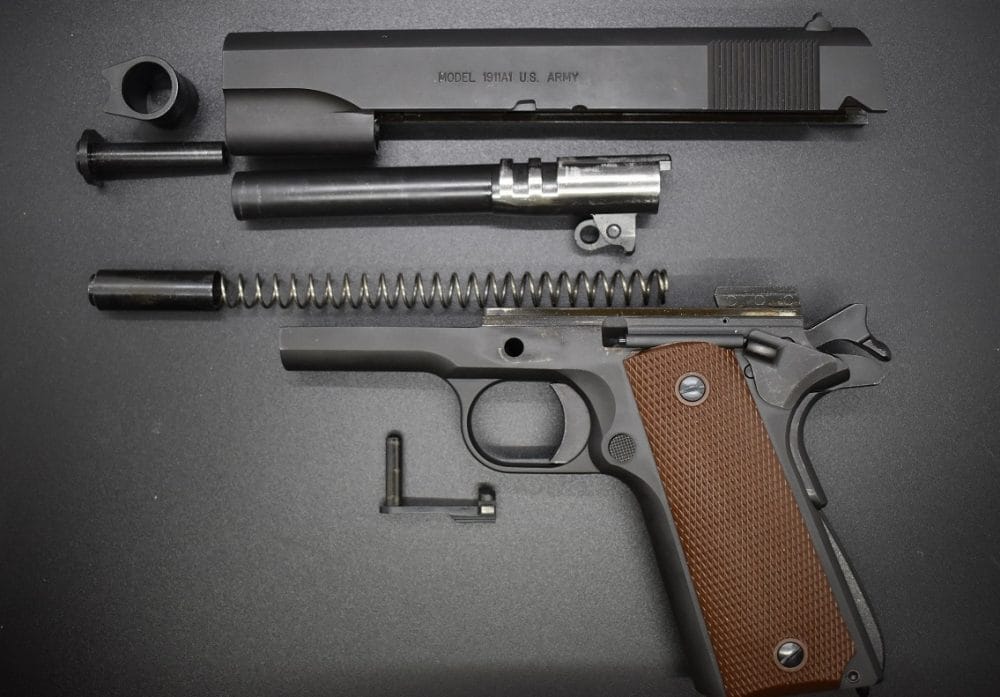 The Auto-Ordnance 1911BKO field strips like any other standard GI, and uses an old-school recoil spring/guide/plug assembly. We managed disassembly without the application of a “dummy mark.” (Photo: Chris Eger/Guns.com)

Weight is 39-ounces, unloaded. For those interested in the 9mm 1911BKO9 series gun for the sake of cheaper ammo, it uses a 9+1 round single stack mag and runs about a half-ounce lighter.

Unlike some producers of guns marketed as GI 1911s, the roll marks on the Auto-Ordnance gun are refreshingly understated and subtle. The right-hand side of the slide is blank as is the left-hand side of the frame. The grips are unadorned. There are no faux military inspectors’ marks to confuse a later generation of collectors. 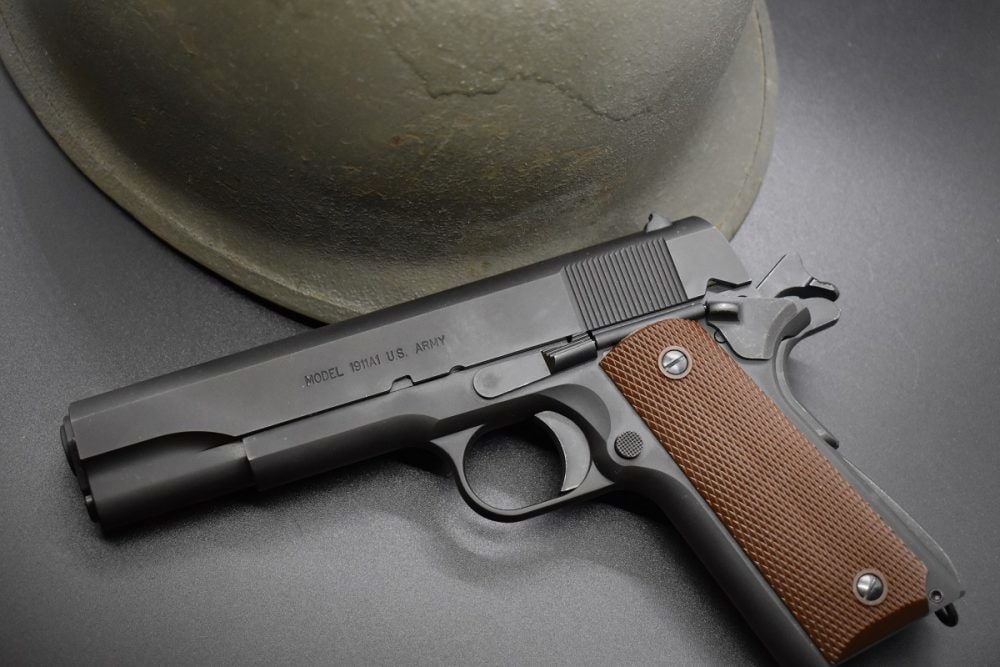 On the left side of the slide is a simple “Model 1911A1 U.S. Army” roll mark which is roughly centered across 1.5-inches of the 8.5-inch slide. (Photo: Chris Eger/Guns.com) 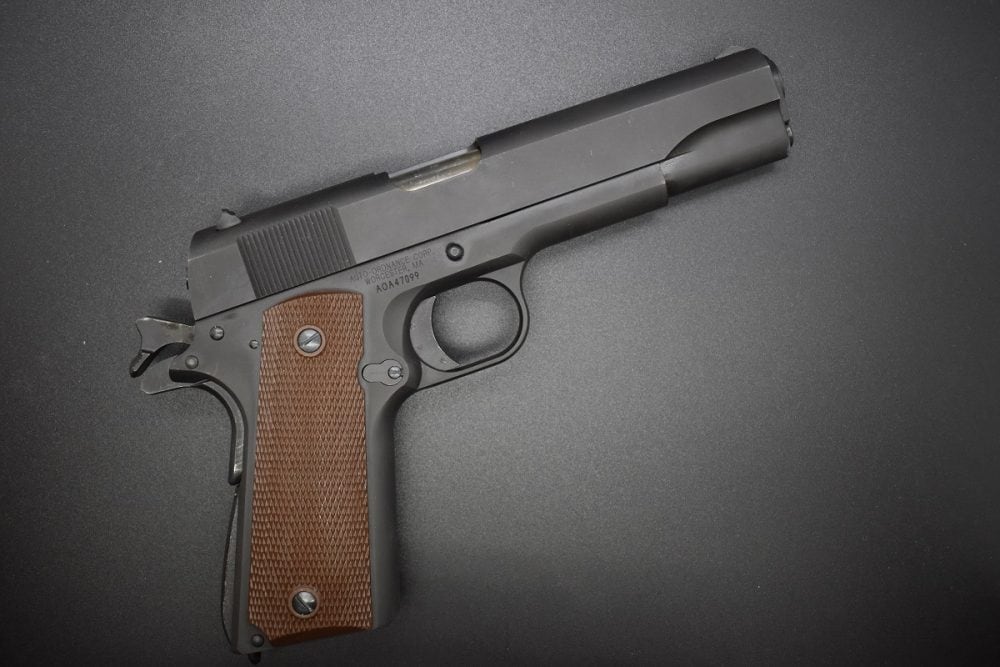 On the right side of the frame, sandwiched in the one-inch space between the takedown lever and leading edge of the grip is “Auto-Ordnance Corp” over a serial number that, like Col. Thompson’s WWII-era Tommy guns, begins with an “AO” prefix. The slab-sided slide is a welcome aesthetic compared to some contemporaries.

For those who want a GI .45 with more splash, AO also markets special commemorative 1911s such as The General and the Fly Girls.

True to form, the 1911BKO has vertical rear slide serrations, a “thick” front sight, and an M1911A1-style ejection port. The front of the trigger is knurled. There is no checkering or stippling on the inside of the grip. The dustcover is smooth and the frame, as would be expected, is non-railed.

The current AO offering ships in a black and white cardboard box with manual and warranty cards, a single Checkmate Industries magazine, lock, and misc. paperwork. The pistol carries a one-year warranty through Kahr. 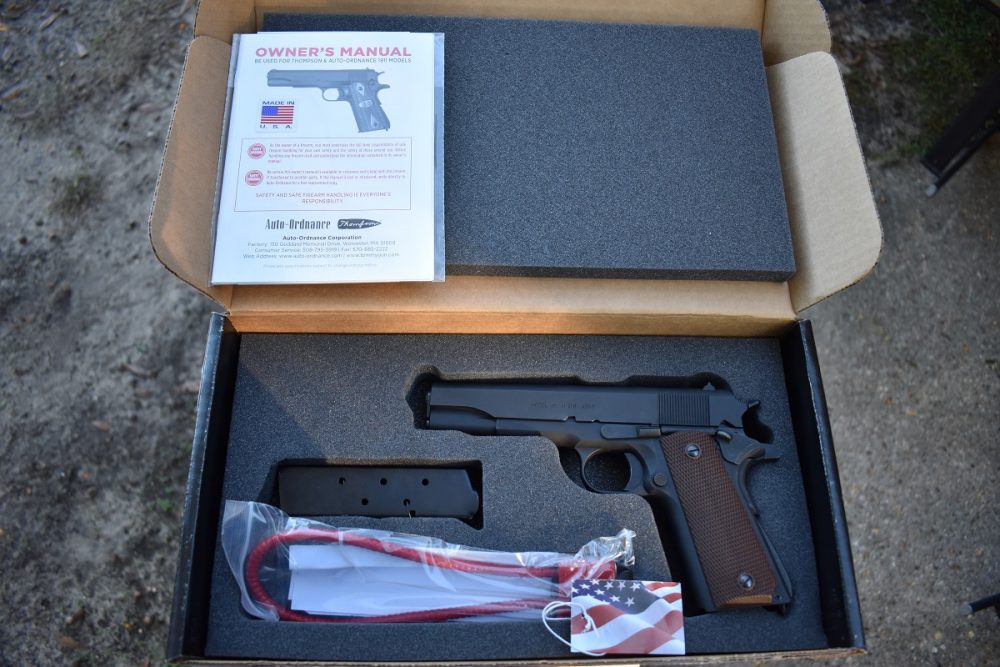 AO did not waste much on the box, but then again, who wants to spend extra cash on a box anyway?

How does it shoot? Initial testing looks good but watch this space in the coming weeks for a full rundown after we finish a few more range sessions. 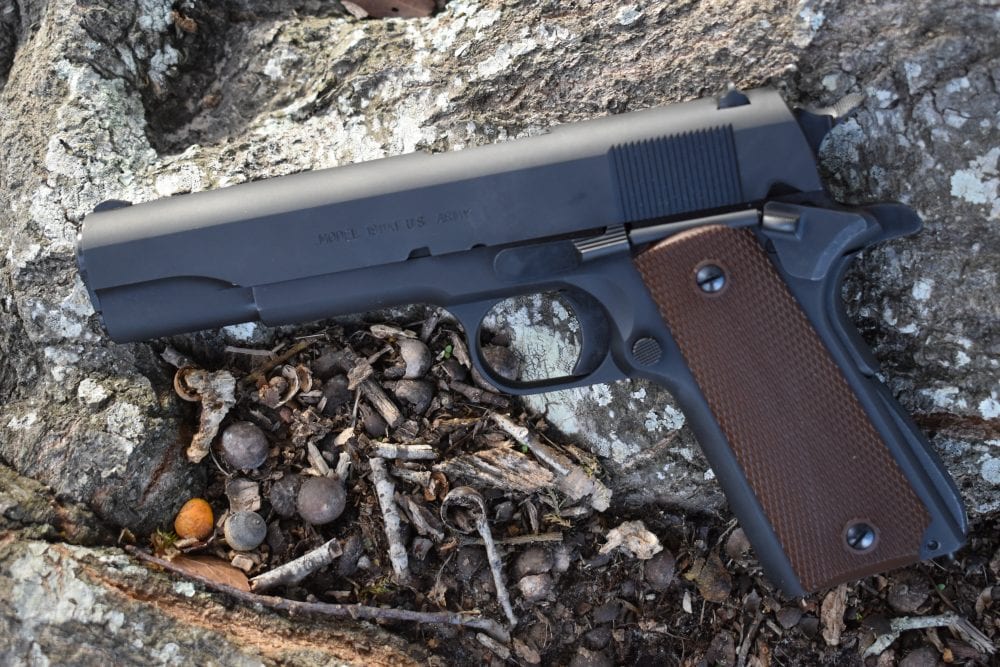