How to Speak 1911: Holding Class on the Evolutionary Differences

In the past 118 years, there has been lots of development in the basic concept of an M1911 pistol. With that in mind, we are here to help break it down.

John Moses Browning’s original Colt pistol, which was adopted in 1911 by the U.S. Army after extensive testing, was a single-action .45ACP with a 5-inch barrel, 8.5-inch overall length and a weight of about 2.5-pounds. The semi-auto used a 7-shot magazine, had negligible sights, and two frame-mounted safeties. A lanyard ring was standard to help keep the pistol attached to the user should it bounce out of the hand, say while on horseback in a cavalry charge.

In short, the first production type of these M1911 pistols looked much like this: 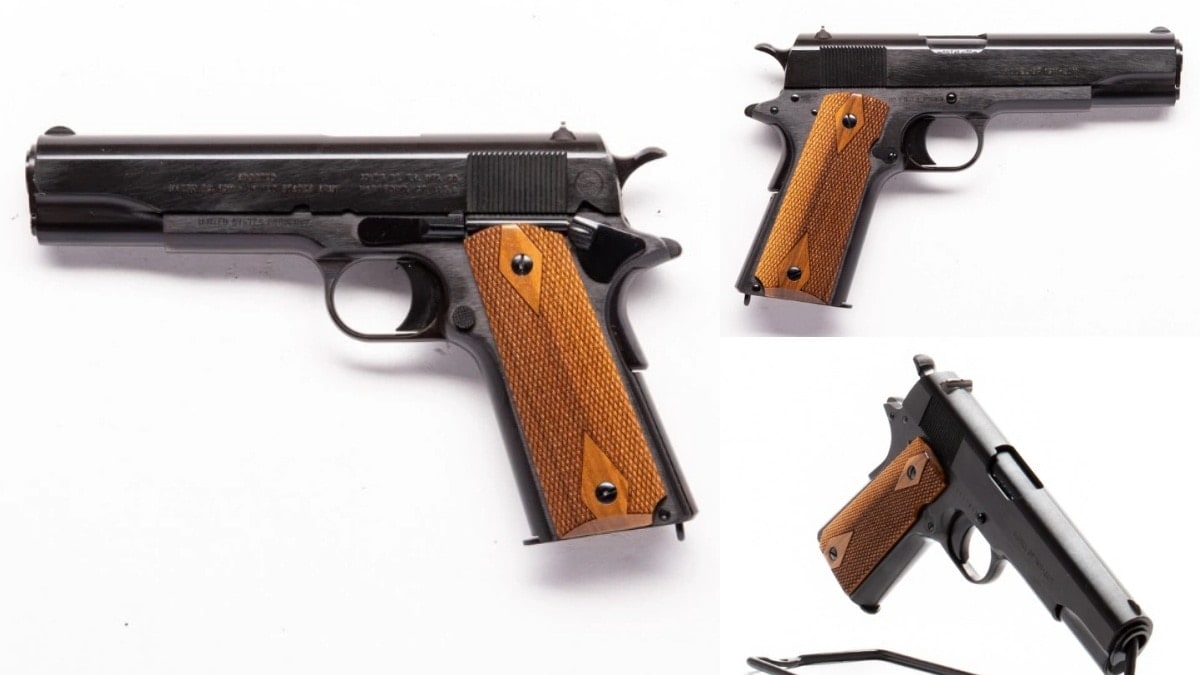 This Colt 1911 100th Anniversary was a limited production run marking “a century of excellence” in the model. It includes checkered double-diamond walnut grips and the early profile that included a flat mainspring housing. This example, in the Guns.com Vault, has its original centenary box and comes with two seven round-magazines.

The guns proved a hit with the U.S. Army, Navy, and Marines who adopted it to replace older revolver models. Starting in 1912, Colt soon offered it on the commercial market as well as to foreign militaries. By 1914, the Royal Norwegian Army had adopted the pistol while British and Canadian military contracts, with the former chambered in .455, signed around the same time. Argentina and Tsarist Russia soon followed suit with their own orders. 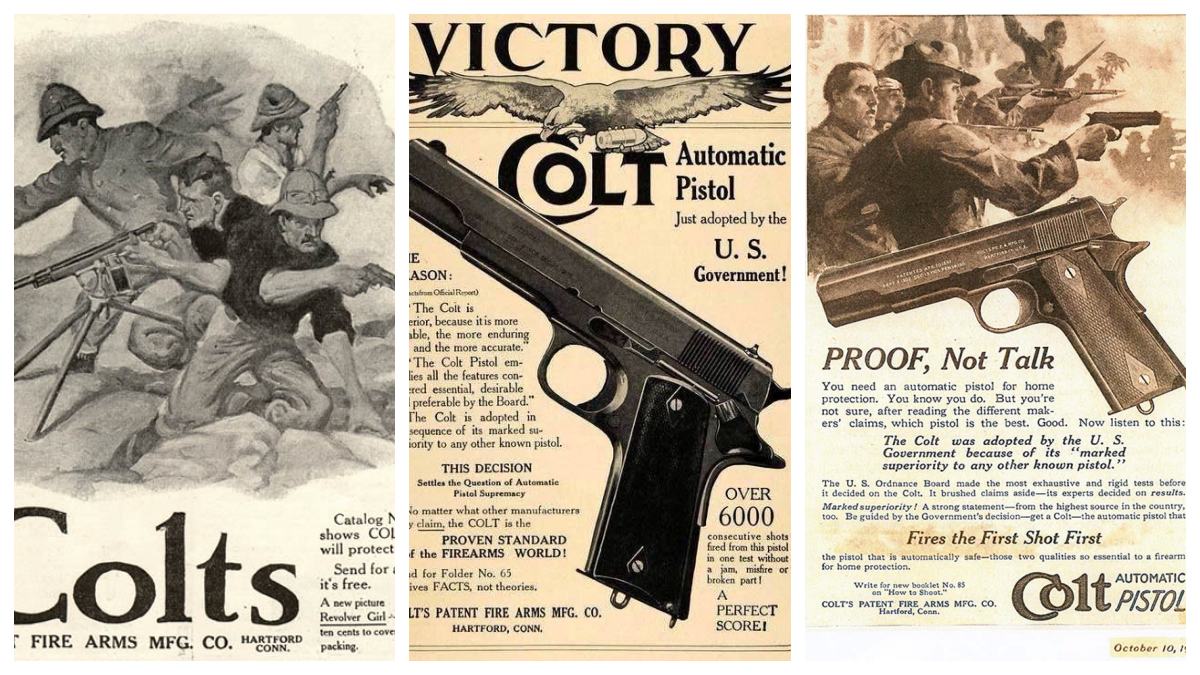 Colt soon marketed the M1911 both to military and commercial markets. Early ads included references to how easy the gun could be used by horse-mounted cavalrymen.

While the first combat use of the Colt GI may have actually been in the hands of Canadians fighting in France in early 1915, U.S. Marines carried the gun with them into battle at Fort Riviere in Haiti the same year while American soldiers had them in 1916 on the Punitive Expedition into Mexico, chasing bandit king Pancho Villa. 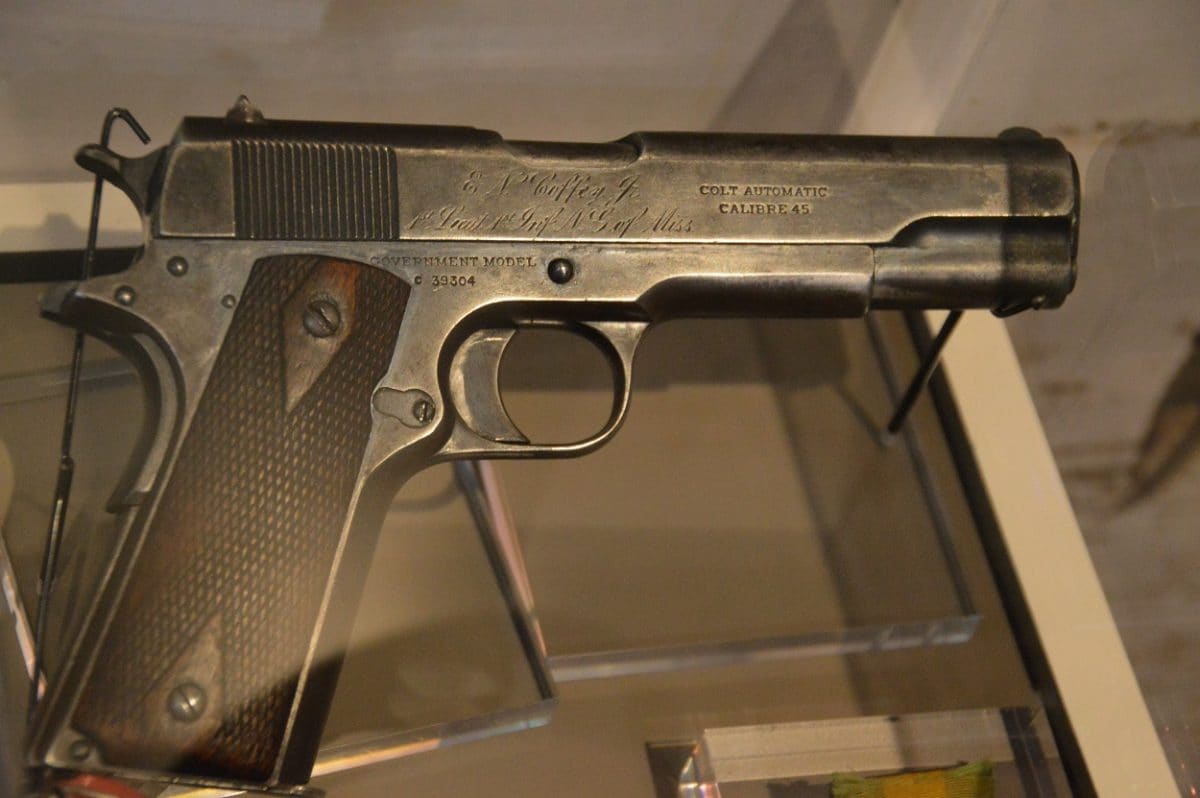 This early 1913-made Colt M1911 Government Model was carried in Mexico in 1916 by Mississippi soldier EN Coffey Jr and is currently a museum piece. (Photo: Chris Eger/Guns.com)

The M1911 and its later M1911A1 descendants would continue to see action in the hands of American service members in the Great War, the Banana Wars, World War II, Korea, Vietnam, and the Cold War, only being (mostly) retired in the late 1980s. During the same time, the standard rifle morphed from the M1903 Springfield to the M1 Garand and later M14 and M16 series. 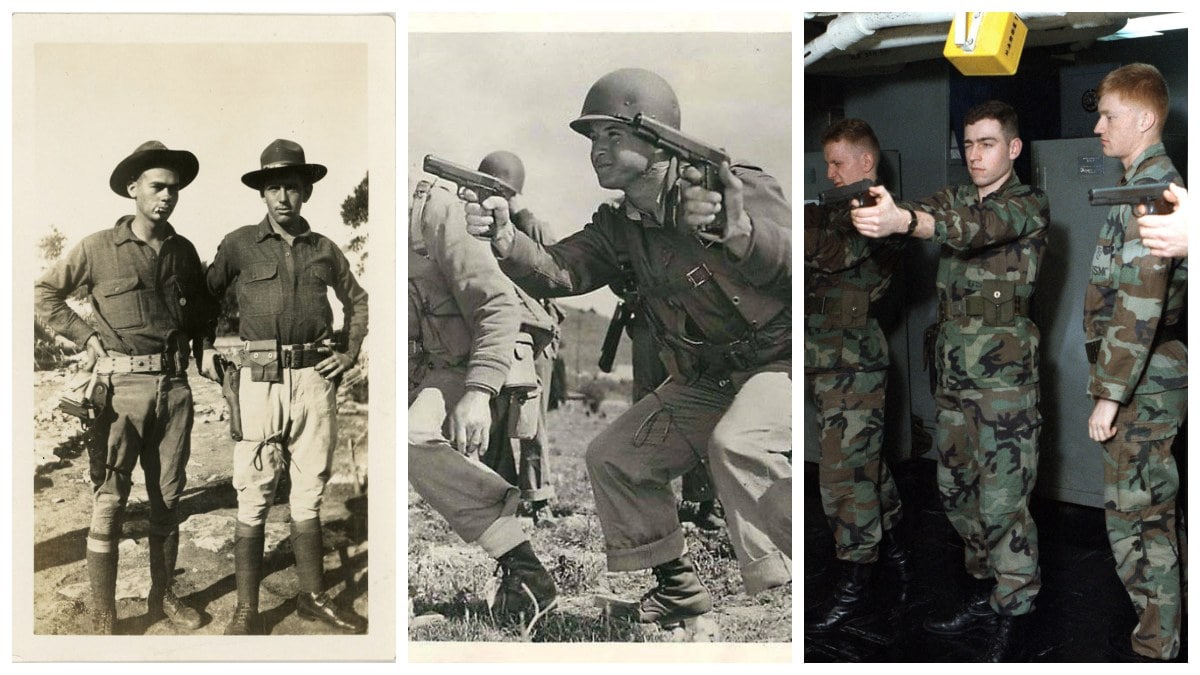 From 1916 through the late 1980s, the uniforms changed but the M1911 remained a common denominator. (Photos: Library of Congress)

After Great War production by not only Colt but UMC and Springfield Armory, by 1924, the now-veteran M1911 was updated to a new standard, the M1911A1. This included a relief cut to the frame at the trigger to allow a better grip by those with smaller hands/shorter fingers, better sights, an arched mainspring housing, shorter trigger, and extended safety tang. 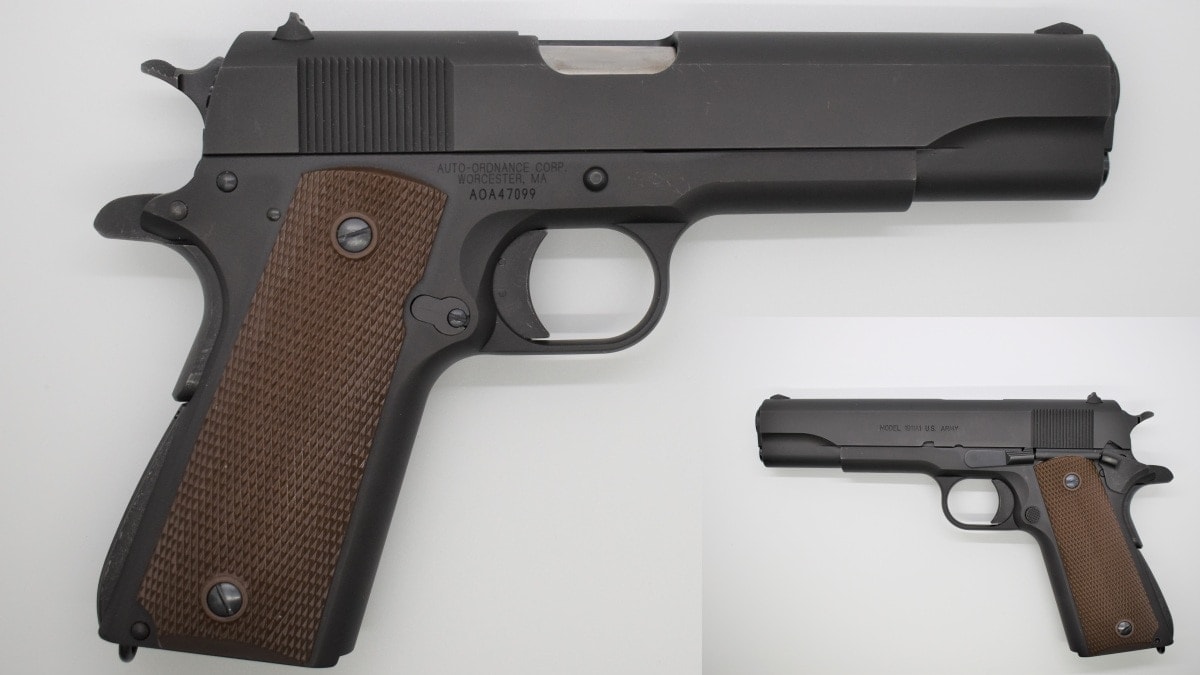 This GI-style repro, Auto Ordnance’s 1911BKO, closely replicates the look and feel of a WWII-era U.S. military M1911A1. Note the clearance cut to the rear of the trigger as well as the shorter trigger itself. Also, note the curved mainspring housing and extended beavertail grip.

The U.S. military ordered so many M1911A1s during WWII from Colt, USS&S, Remington-Rand, and Singer that the models produced by 1945 were enough to meet the Pentagon’s needs until the Beretta M9 was adopted in 1985. In fact, at least some 90,000 of these vintage pistols are still in arsenal storage at Anniston Army Depot.

Commercially, Colt branched out and produced National Match guns for competition shooters– following in the wake of standard military M1911s which had been customized by Army gunsmiths– and in 1950 began producing what they termed “Commander” series guns. These pistols were shorter, running a 4.25-inch barrel, and lighter by nature of an alloy frame. Similarly, these guns were offered in calibers other than .45ACP, to include .38 Super (which Colt first started chambering commercial 1911s in as early as 1928) and 9mm Luger. Also gone was the lanyard ring. 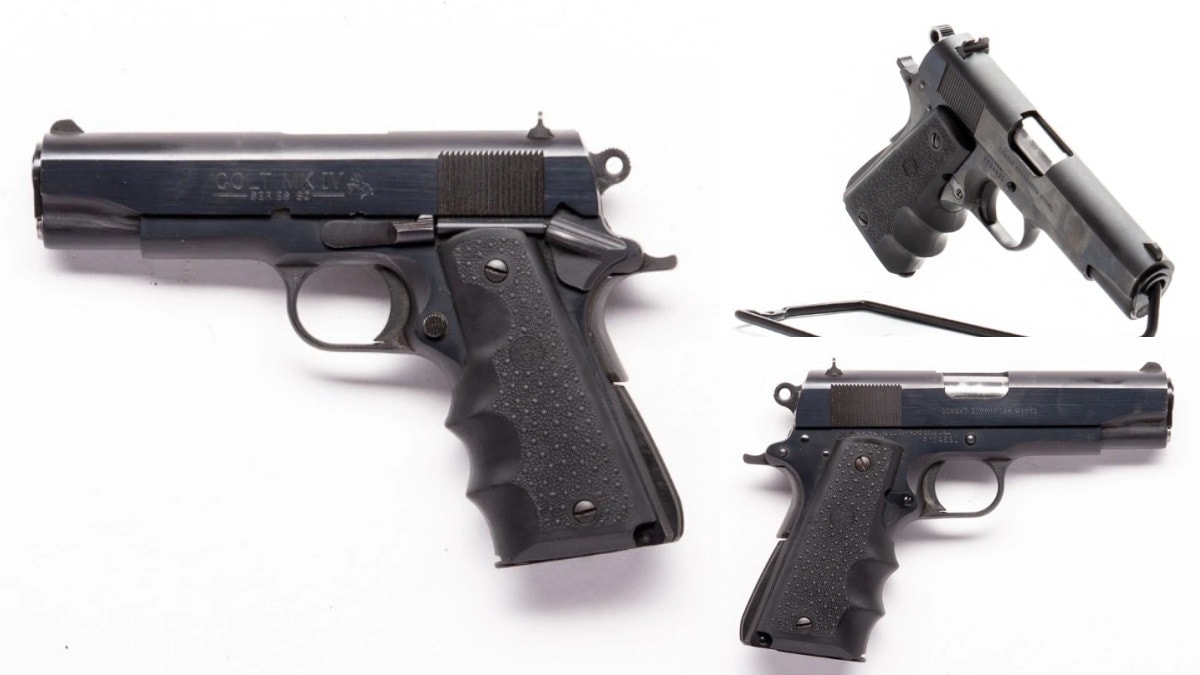 This circa 1991-made Colt Combat Commander MK IV in our Vault is chambered in 38 Super and has aftermarket Houge wraparound grips. Using a shorter barrel and yielding a lower weight, Commander-style guns chopped the longslide to a more manageable length.

Going shorter than the Commander, “Officer” series Colt 1911s hit the market in 1985. The gun was styled after the short run of M15 General Officer pistols produced at the U.S. Army’s Rock Island Arsenal in the 1970s which were made from chopped-down GI .45s already on hand. Colt ran with the concept and released their own Officer models using 3.5-inch barrels and shorter grips, typically with a 6+1 capacity in .45ACP. 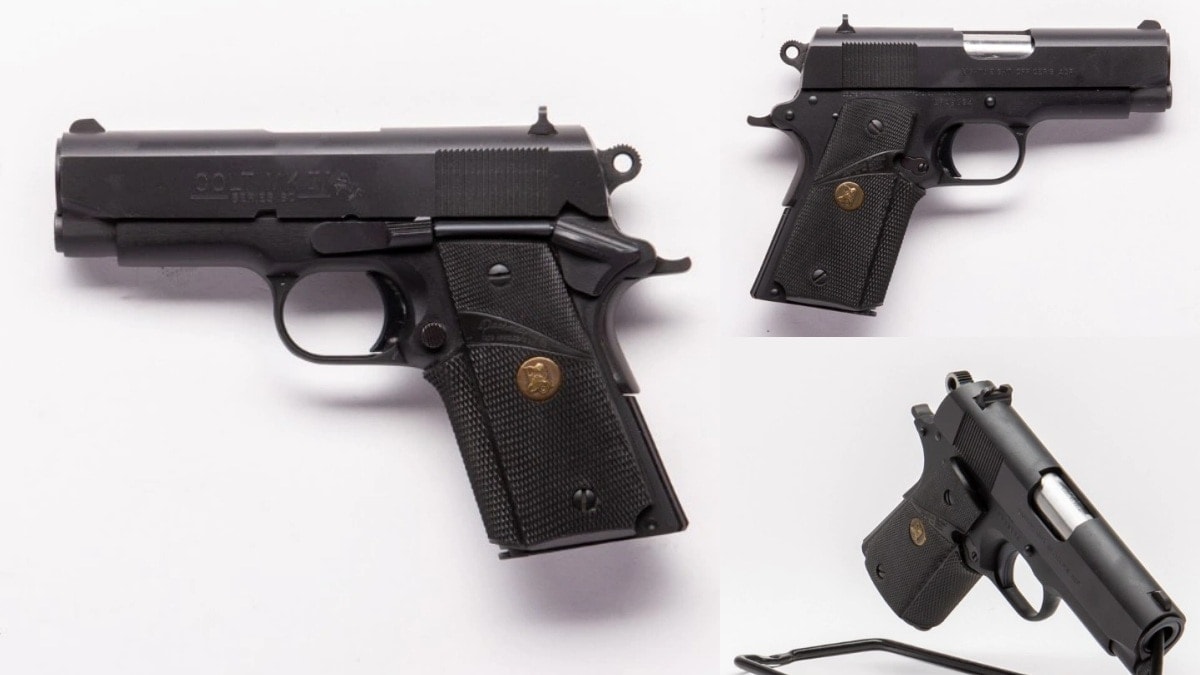 This 1989-production Colt Lightweight Officer model in our Vault sports Pachmayr rubber grips and is chambered in .45ACP.

Internally, 1911 models saw a big change in the 1970s when a collet bushing, which better centered the pistol’s barrel, replaced with the original bushing design, sparking an era of “70 Series” guns. It’s a major difference to 1911 fans, with many preferring the older 70 Series for competition guns.

The “80 Series,” so-called because it was introduced by Colt in 1983, is a more modern development, aimed at increasing drop safety for carry guns through tacking on additional features such as a safety plunger, with the caveat that it adds some extra trigger smush. Many of these guns, if made by Colt, also had a flat mainspring housing like the early pre-1924 M1911 as well as a solid barrel bushing. Likewise, the small ejection port, common on the pistol since it was first adopted in the age of the Model T Ford, was lowered.

To further explain the internal variance between the 70s and 80s, Justin Baldini, product director for Colt, covers the evolutionary process between the two in the below video.

Moving past the Pony, in more recent generations it seems like almost every big semi-auto pistol maker has made inroads to the popular 1911 market. Today, Smith & Wesson, Sig Sauer, Ruger, Springfield Armory, Kimber and Remington all make assorted 1911s domestically while overseas pistol makers like Taurus, Rock Island, and Tisas make no-frills models for import. One sure bet at SHOT Show every year is that a new maker will cannonball into the 1911 pool.

Today may likely be remembered as the golden era of 1911 production, with the guns still bought, sold, carried, and used extensively even though few are used in military or law enforcement currently. These include competition guns, plinkers, carry guns and just plain old collectibles ranging from .22LR models on up.

As far as prices, you can go from a used Rock Island GI Standard for as low as $338 to a Cabot Vintage Classic or Wilson Combat Supergrade that will set you back closer to $4K

Speaking of which, check out this Nighthawk Custom crafted by legendary gunsmith Bob Marvel: 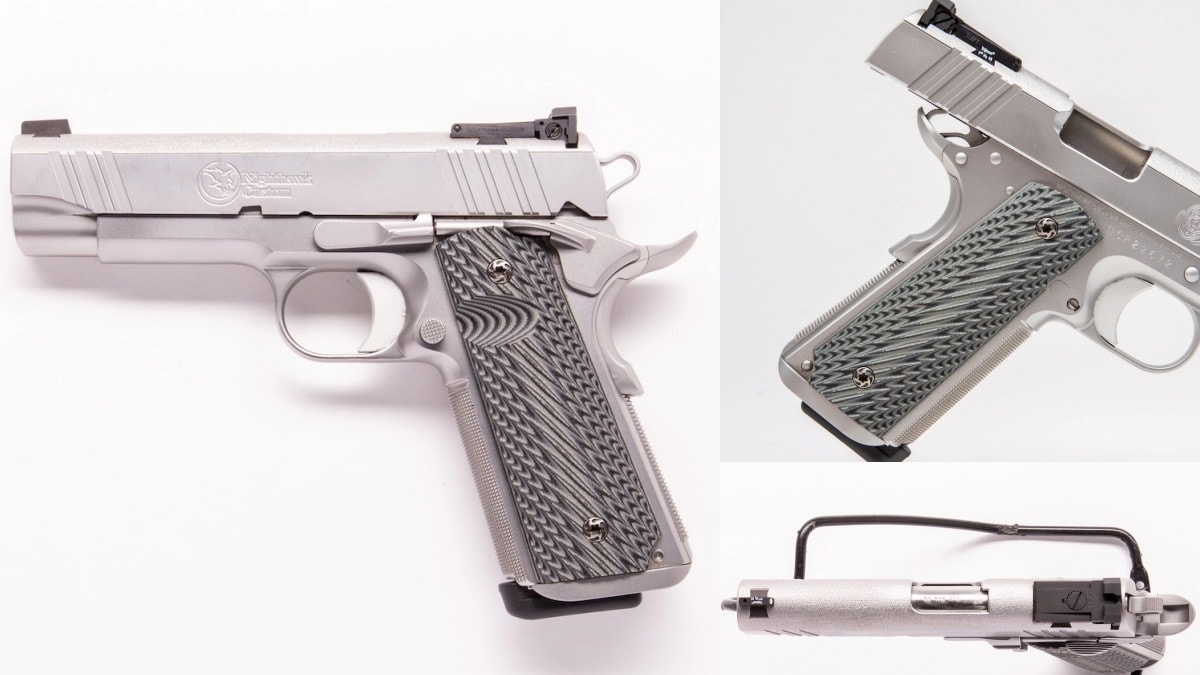 It just doesn’t get any cooler than this when it comes to 1911 carry guns.