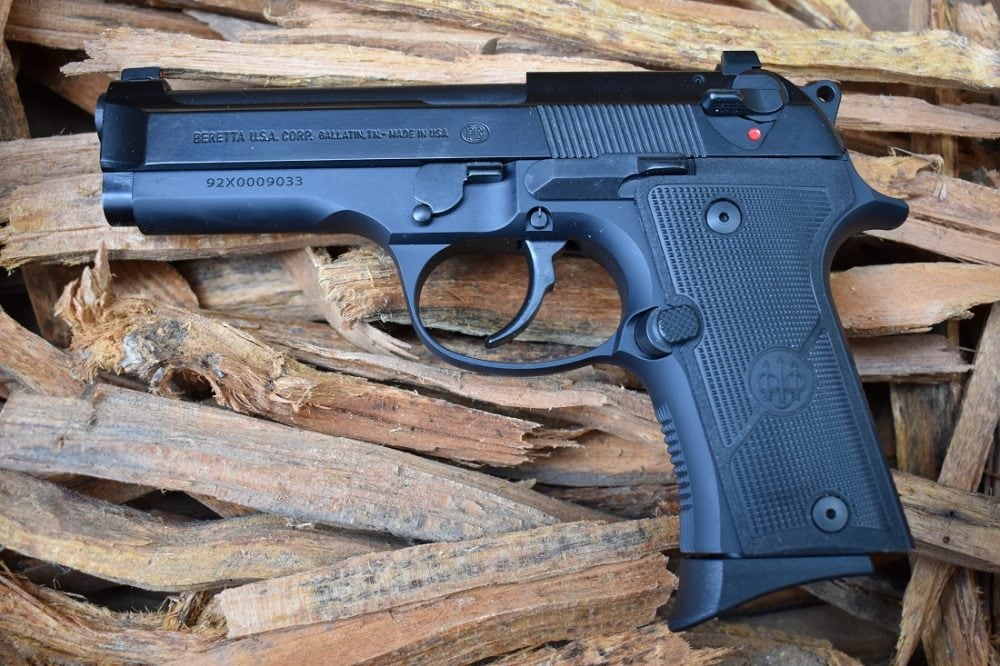 Building on 40-years of Model 92 history, the 92X series has lots of upgrades over past models while remaining (well) under the $1K mark. (Photos: Chris Eger/Guns.com)

We have been shooting and carrying one of Beretta’s newest versions of their iconic Model 92, the 92X, and have a few things to report.

Unveiled this year by the historic Italian gunmaker, the 92X series is an American-born descendant of the now-classic combat pistol that first debuted in the 1970s and is produced at their Gallatin, Tennessee plant. Announced in July in Full-Sized, a slightly shorter Centurion  and handy Compact variants– the latter both with and without an accessory rail– the new handgun line is packed with features and upgrades not found in the more basic 92FS/M9 pistols while coming in at a price that is more affordable than the M9A3 and the semi-custom LTT/Wilson Combat 92G series guns. 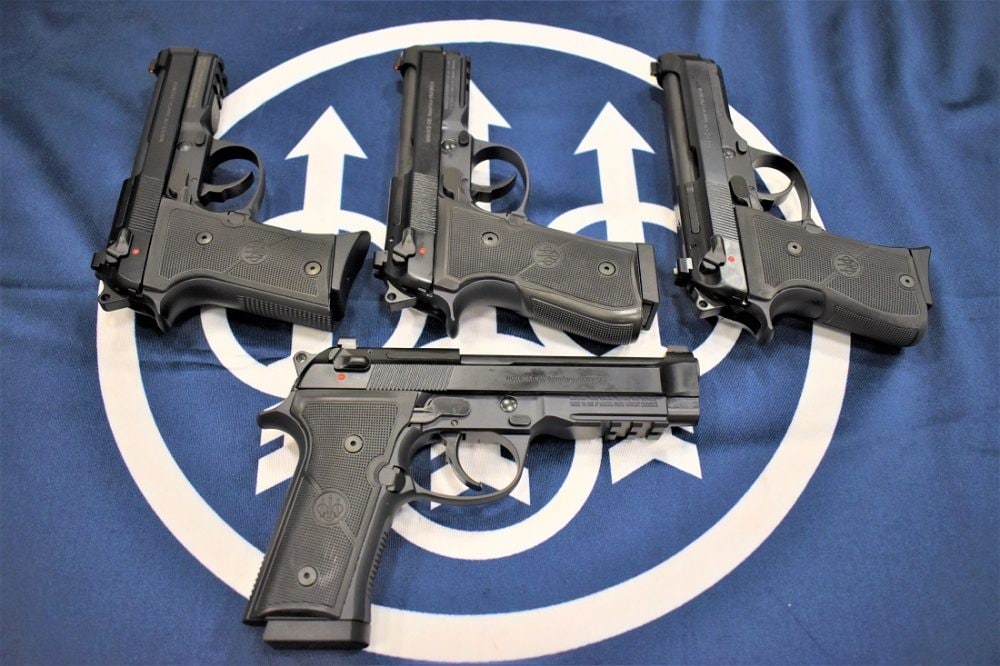 Built on the Vertec profile frame with a straight backstrap and updated grip options, the guns all feature a round trigger guard, beveled magazine well, chrome-lined barrel with a recessed target crown, front and back cross checkering on the grip frame, and combat sights with dovetailed fronts. The guns use a steel trigger and mag release.

Expanding on the original line, the 92X series is backward compatible with all 92-series magazines and railed accessories while the front sights and grip panels are compatible with M9A3 models. Internal components are square with legacy 90 series parts of similar size while the double-action/single-action types (F/S, G) can be swapped. While some scoff at external safety levers, those searching for guns that sport them are in the money.

Related: Unboxing the Beretta 92X Compact & Comparing it to its Rivals

Since late September, we have been shooting and evaluating a new Beretta 92X, specifically the Compact variant with the smooth dust cover.

While the standard/full-sized 92X uses a 4.7-inch barrel to produce an 8.5-inch long handgun that tips the scales at 33.4-ounces while unloaded, the smaller Centurion is a more Commander-style offering with a shorter 4.25-inch barrel which boils down to a 7.75-inch overall length.

Going even shorter, the 92X Compact has the Centurion-length slide and barrel on a shorter frame (5.25-inches high, versus the standard 5.4-inch) to produce a handgun more suited for concealed carry. 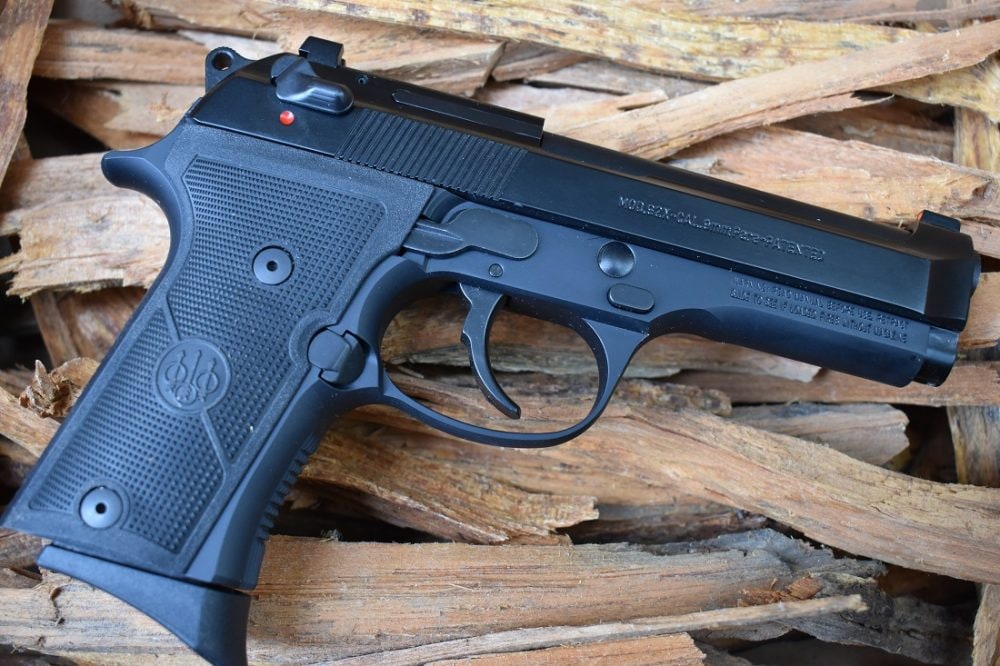 Due to the chopped down frame, the Compact has a smaller mag capacity — 13 rounds– but also comes in a little lighter, hitting the scales at 27-ounces, unloaded. This puts the Compact in roughly the same class, size-wise, as guns such as the Glock G19, Sig Sauer P229, and S&W M&P M2.0 Compact. 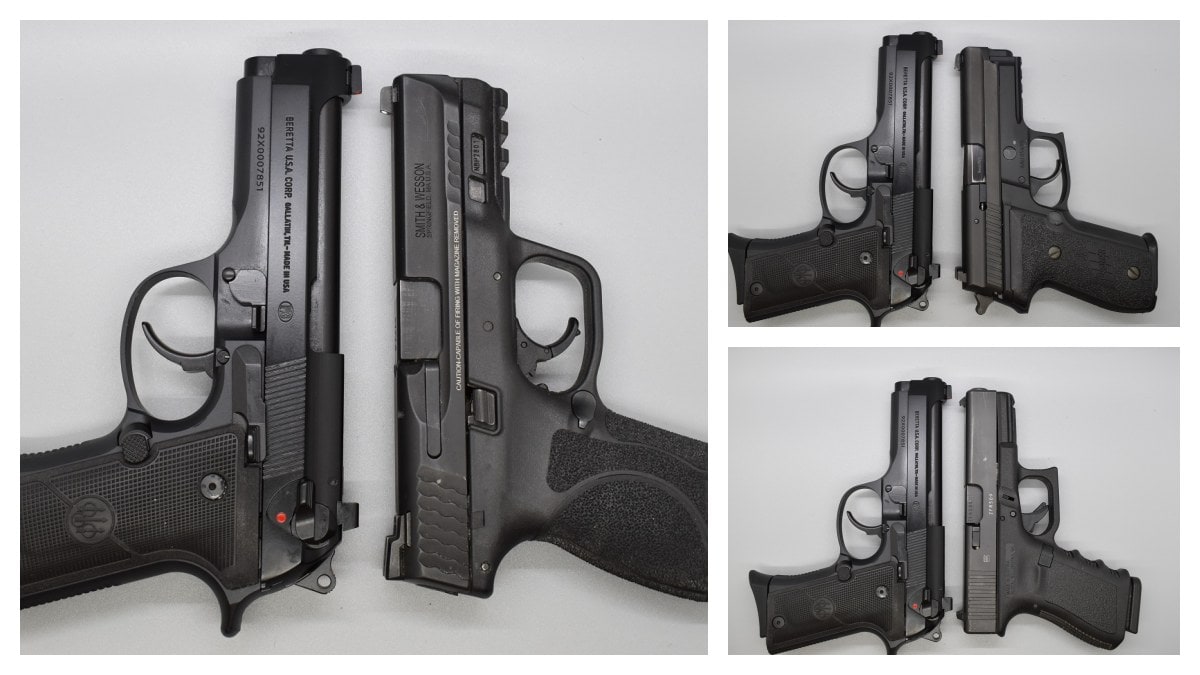 Weight and size are very similar to the P229, G19 and M.20 Compact with the 13-round capacity of the Beretta Compact matching the Sig but falling two rounds short of that provided by the 15+1 Glock and S&W.

When it comes to carrying, the size makes it a bit tough for some to use the Beretta 92X Compact in an IWB appendix carry holster unless you go awkwardly high-waisted, but if carrying strong-side in the 3′ or 4′ o-clock position with a good belt then you are good to go. We carried the test gun for nearly 400 hours in such a manner without issue during both winter and summer weather as well as in urban and field conditions. Likewise, pocket, ankle, and small of the back carry can be ruled out unless you want to shuffle in a comic book-worthy gait or print like a 1900s daily newspaper.

We used an older Kramer IWB leather holster for a 92FS as we had one on hand and had no issues with the gun. Carrying a spare mag gave us 27 rounds of 9mm on hand.

Be warned that, should you use a holster without a barrier between the grip and the user, the texturing on Beretta’s factory grips is aggressive and will chew at your side. This can be fixed with aftermarket grips or by sanding down the factory panels. Also, the open-barrel construction and pinky extension magazine pad are collection points for dust, grime, and clothes lint, so be sure to inspect your 92X regularly if carrying one. Likewise, as we used an open-bottom holster, the face of the muzzle, which has a recessed target crown, showed some wear after a month or so. 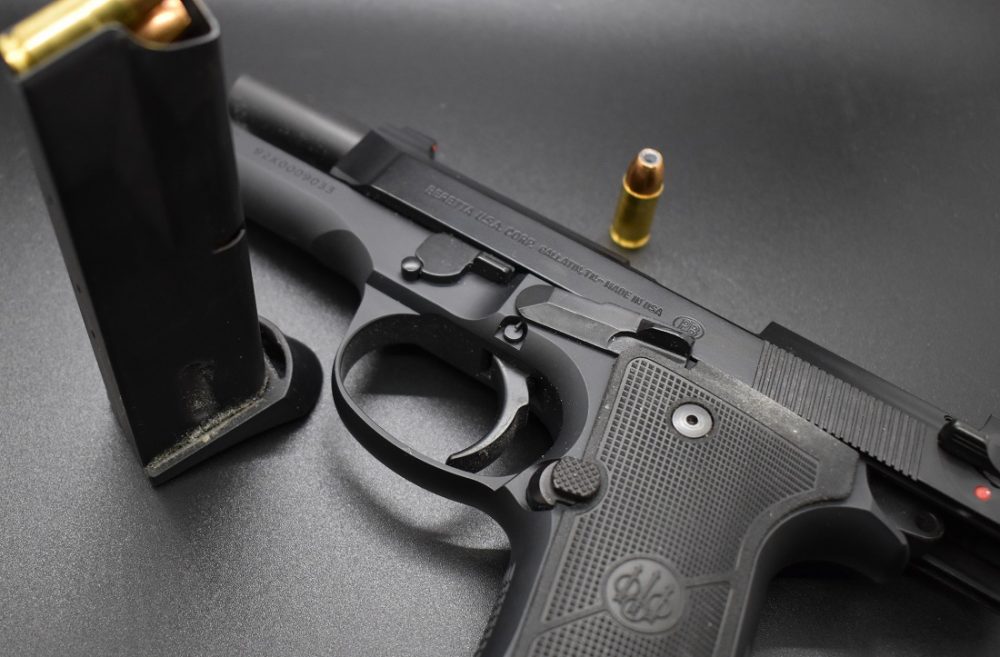 The 92X Compact after two months of carrying and about 2,000 rounds, post-cleaning. None too worse for wear mechanically. Note the schmutz that collects around the inside rim of the pinky extension mag pad and the wear high on the grip panel. 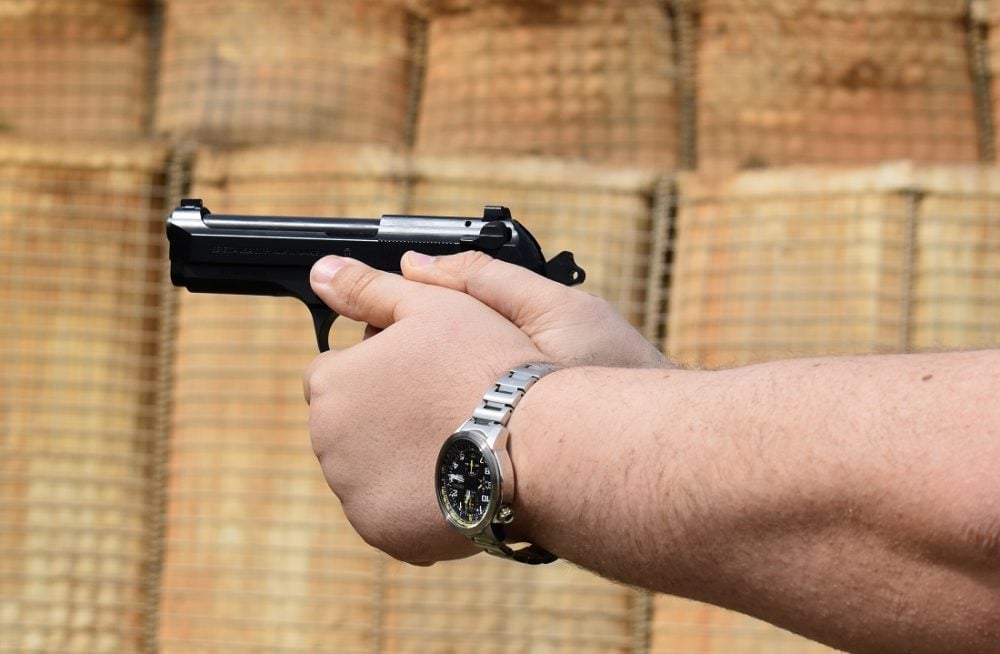 While many more diminutive “carry” style versions of full-sized guns are not enjoyable to shoot, the 92X Compact does not suffer from the same problem

In the course of six range visits, we sent 2,000 rounds of factory 9×19 Luger through the Beretta 92X Compact. This included a selection of loads from Winchester, Federal, CCI (Blazer), Wolf, and PMC in weights between 115- and 147-grain with a mix of various training and self-defense ammo in standard commercial, military, and +P velocities. 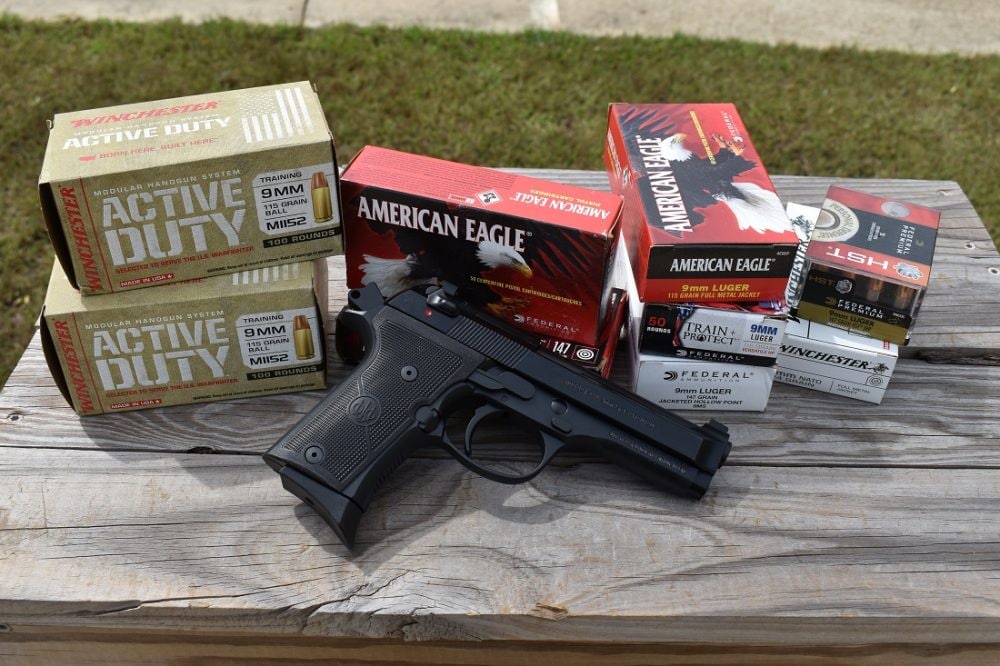 When it comes to reliability, the 92X was on point with only a single malfunction observed across the range testing. That was a failure to fully extract while using Wolf Military Classic 124-grain on a gun that was super dirty– like 800 rounds dirty. Range testing was done on a pistol right out of the box with no additional lube or prep. The pistol was cleaned with Ballistol at the midway point of 1,000 rounds as well as at the end of testing with no cracks, breakages or damage observed.

Practical accuracy, with the serrated rear sights and orange post, was well within what you would expect for a self-defense or duty use handgun. We had no problem dropping plates or eating out the center of silhouette targets to 25 yards. 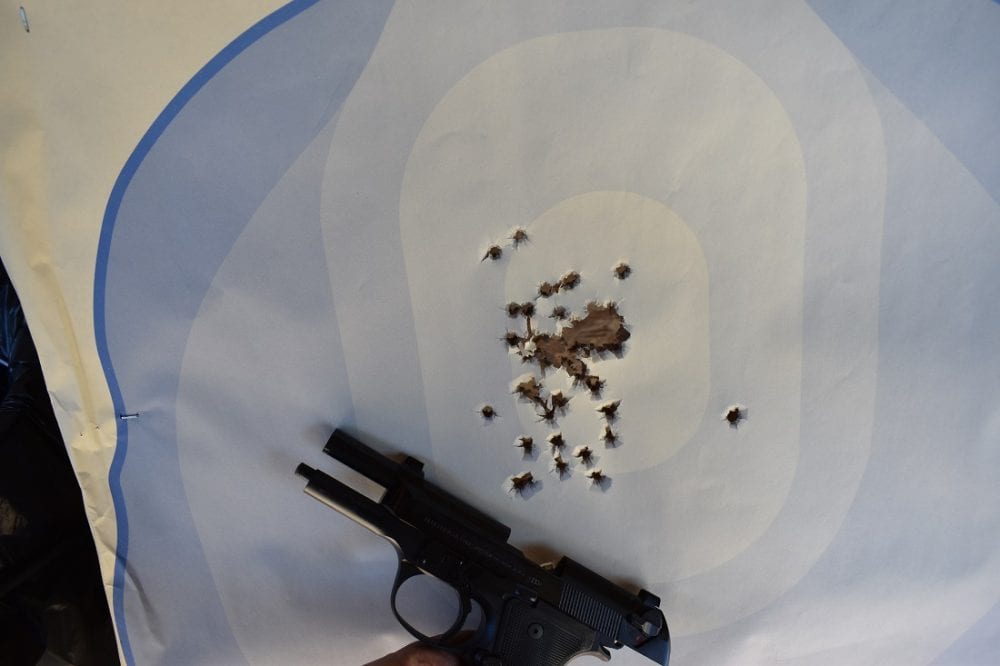 Accuracy wasn’t half bad. The slight left-leaning tendency is all mine.

The trigger pull, being DA/SA, was significant on the first shot when in double-action– about 11 pounds– but this dropped to a nice 5.75-pounds in single-action after the reset. I am no trigger snob, but I found the stroke on the factory pack smooth, if long, on DA, and crisp on SA with about a half-inch reset. 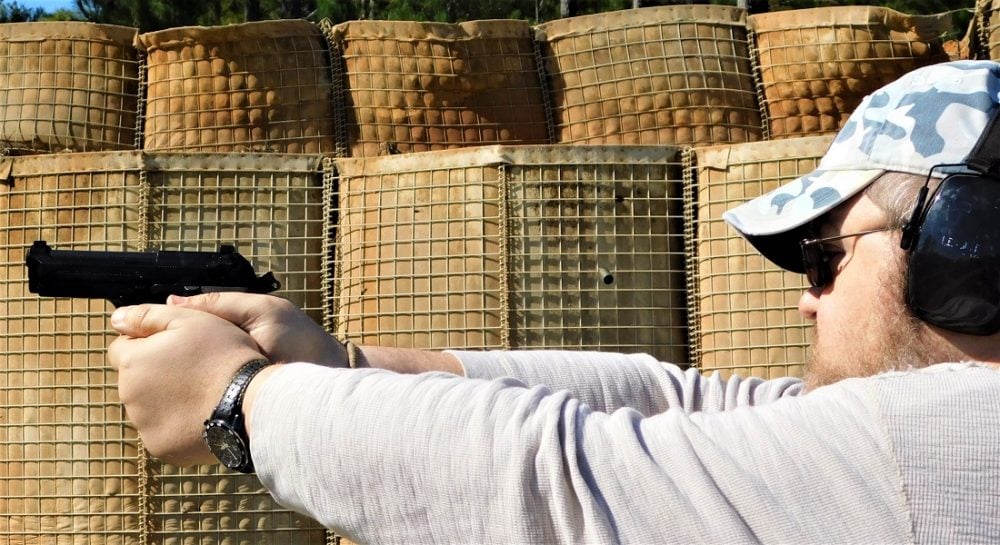 Control of the pistol, between the front and back cross checkering on the grip frame and the enhanced panels, was no issue. Note the shell casing midway between my beak and the sights

The surface controls, with the oversized and reversible mag release, are ergonomic and easy to use. The mags fell free during both administrative and emergency reload drills. The extended pad on the mag makes it easy to strip out if it doesn’t. It should be noted that all the guns in the 92X series use a beveled magazine well.

While some carry or personal defense guns are not enjoyable to shoot, the 92X Compact is still fun at the range. 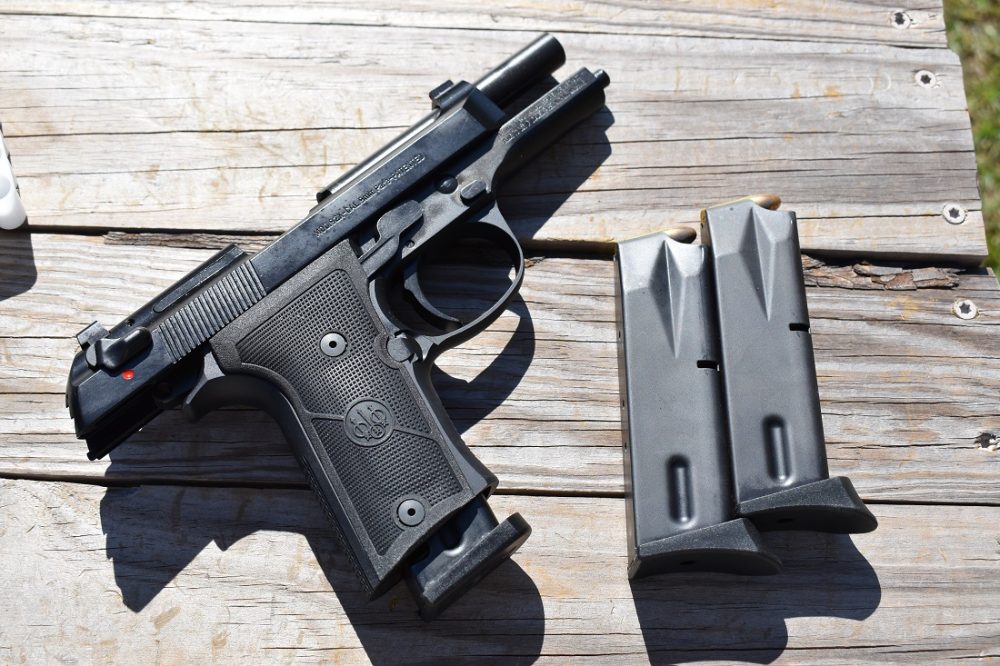 Although a chopped-down model with a shorter Type L grip and 13-round magazines– shown to the right– the 92X Compact ran fine on full-sized 15/17-round 92F magazines– although you can see they hang out a bit further, with a standard 92 mag shown fully inserted.

The 92 series, when it first hit the market in the Disco Era, was innovative and soon proved wildly popular the world over on the consumer, LE and military market. Over the generations since then, Beretta has worked hard to keep the gun with the front-runners of the pack (see= Vertec and M9A3 F/G models et.al) and the 92X line is a continuation of that concept.

In the end, the 92X gives the modern shooter a reliable handgun that stands on 40+ years of legacy while having a lot of features– DA/SA hammer-fired action, all-metal construction, slide-mounted safety/decocker– that you aren’t going to find on the average plastic fantastic. Further, it does it all in three available sizes with a ton of aftermarket support. The 92X series may not get people to drop their polymer striker-fired handguns, but it does give those who are familiar with, or prefer, the 92 families a more contemporary pistol that is both fun to shoot and dependable. 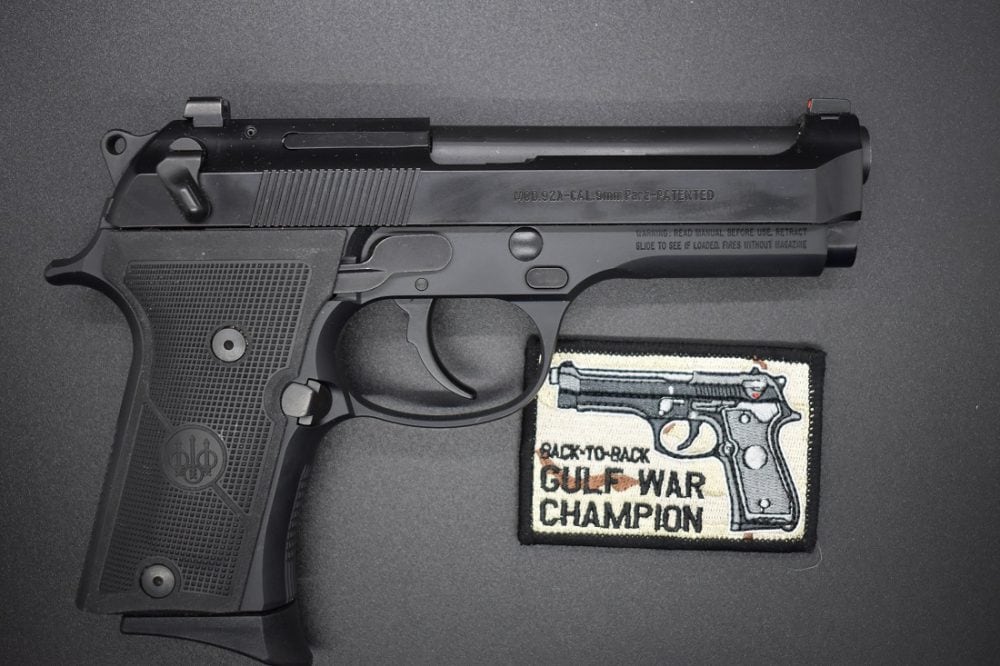