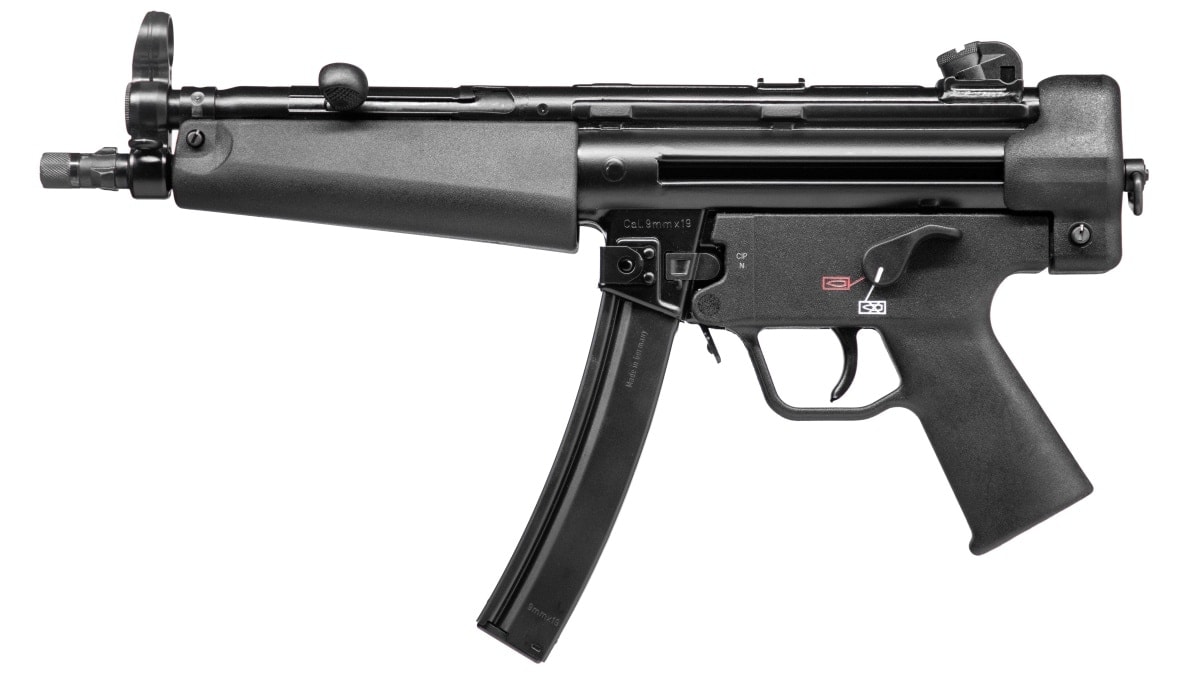 Complete with a paddle-mag release and threaded, tri-lug barrel, the SP5 is the pistol HK MP5 fans have wanted for years. (Photos: HK)

Just in time for Christmas, Heckler & Koch announced they finally read the letters to Santa and are introducing as close as they can get to a consumer MP5.

Dubbed the SP5, the semi-auto 9mm pistol closely matches the look and feel of the legendary MP5 submachine gun. How closely? It has an 8.86-inch Navy type barrel with threaded tri-lug adaptor, paddle magazine release, fluted chamber, and a chrome-lined bore. Further, it uses the same roller-delayed blowback operating system that has been HK’s hallmark for generations. 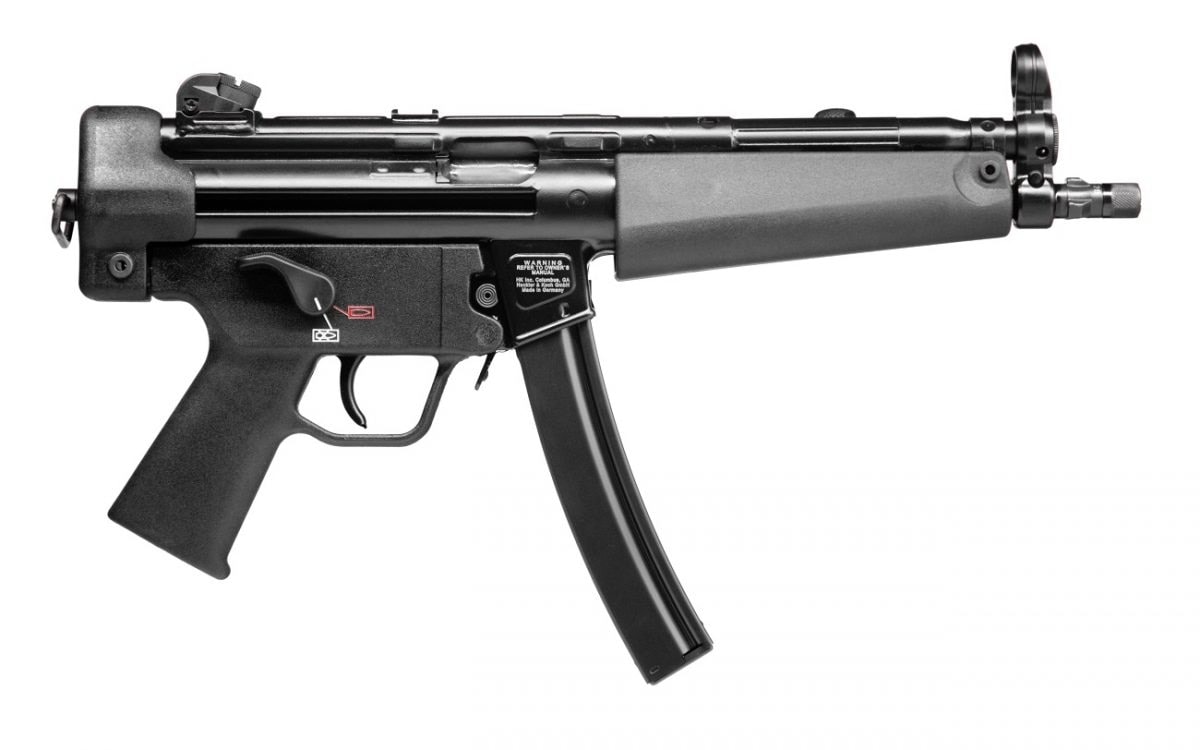 Sure to make a lot of wish lists…

“The New SP5 will make all those generic MP5 copies out there look like nothing more than gun store consolation prizes,” says HK in their press release on the new gun, which is much closer to what the market wanted than the snubby and feature-poor SP5K series which was released in 2016. 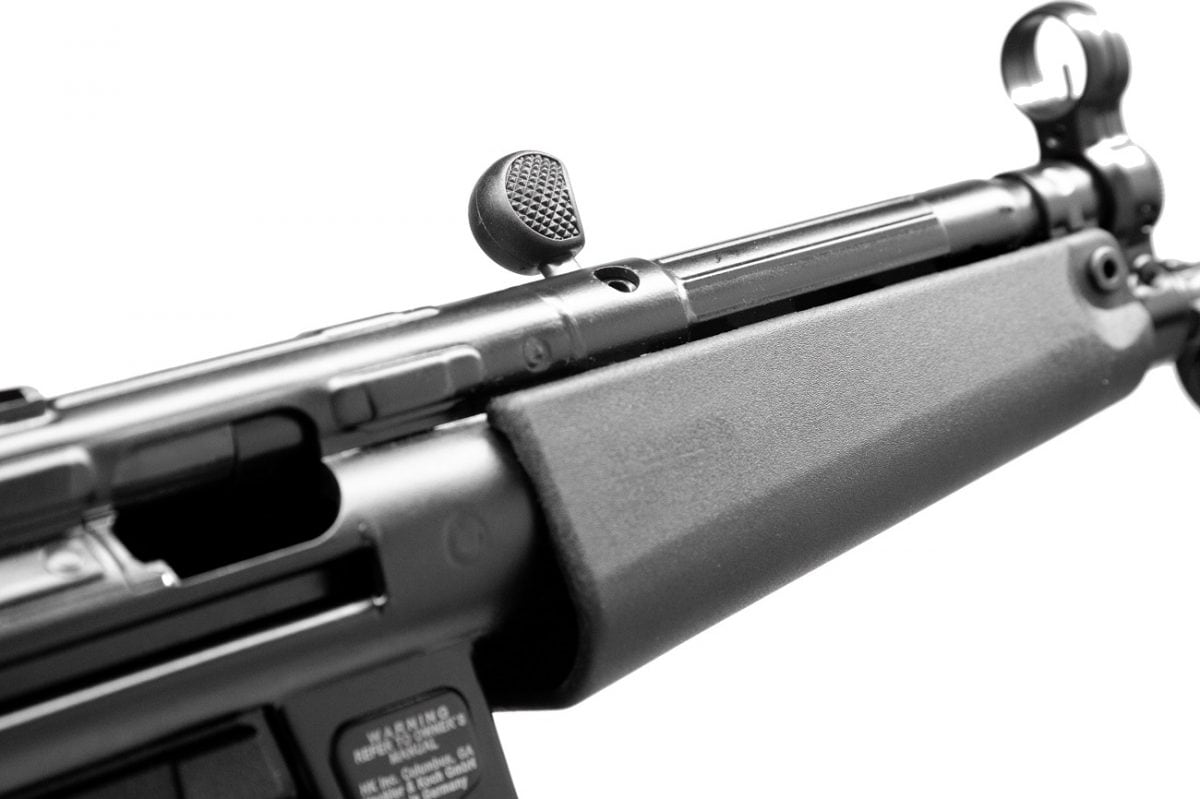 When it comes to specs, overall length is 17.8-inches with a 10.2-inch sight radius, while weight is 5.1-pounds without the mag. The chrome-lined hammer-forged 8.86-inch barrel uses a 6-groove right-hand twist. Width is 2.48-inches. Height is 8.66-inches. 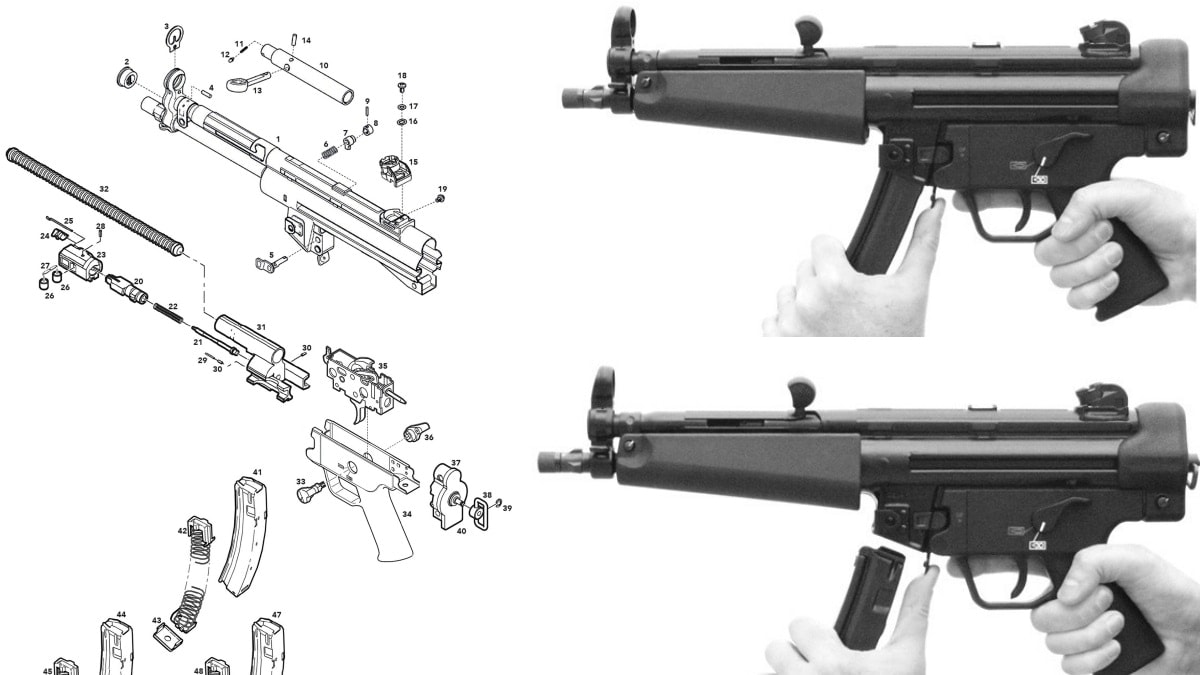 The HK SP5 is the perfect option for those who want a genuine MP5 but don’t have genuine MP5 dollars.

Naturally, it uses MP5 mags. This, combined with the specs, puts it much handier and truer to the original than vintage HK 94 carbines or the kinda wonky SP 89 pistol. 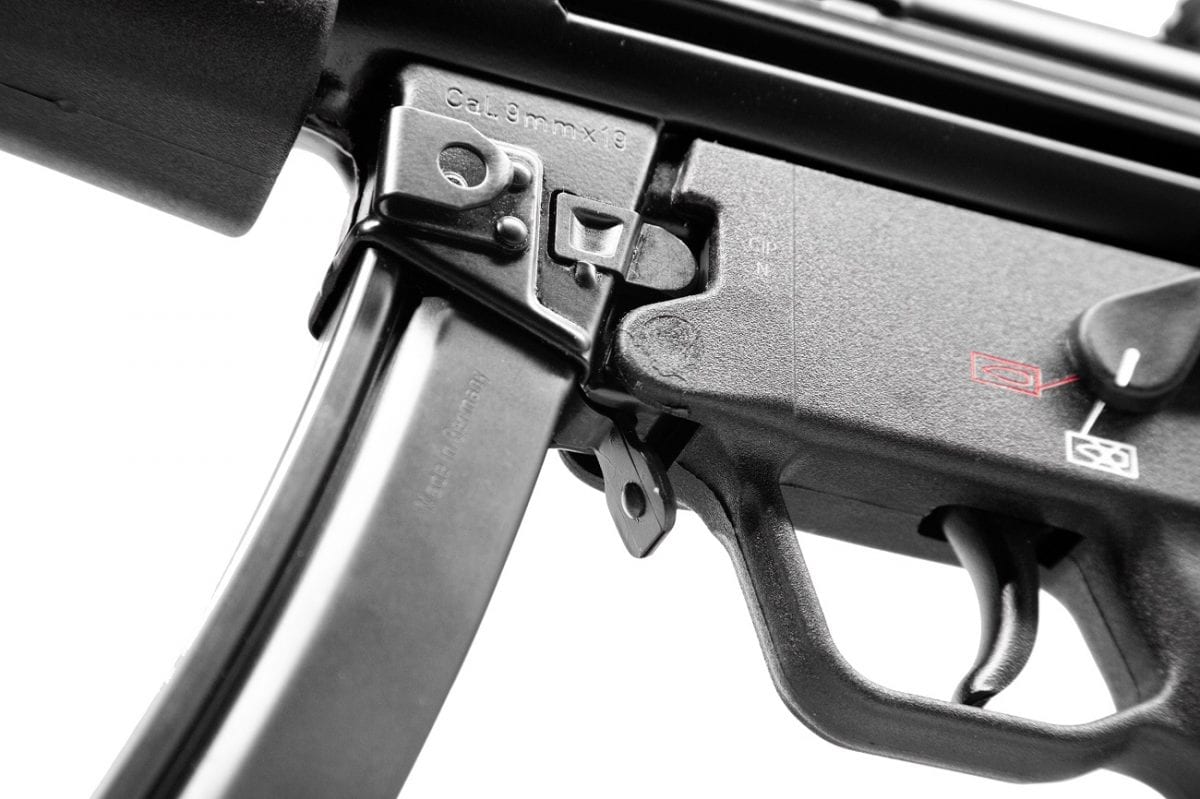 The SP5 uses the same paddle magazine as the MP5.

Made on the same lines and with the same machinery that the company cranks out MP5s on, the SP5 is produced at HK’s Oberndorf factory in southwest Germany.

The pistol is equipped with an elastic kind of old-school “bungee” style sling that mates to hardware on the rear of the receiver. Those wanting a thing that goes up can opt for an aftermarket brace or users can just go ahead and put an MP5 stock on it and make it an SBR, NFA-rules apply. 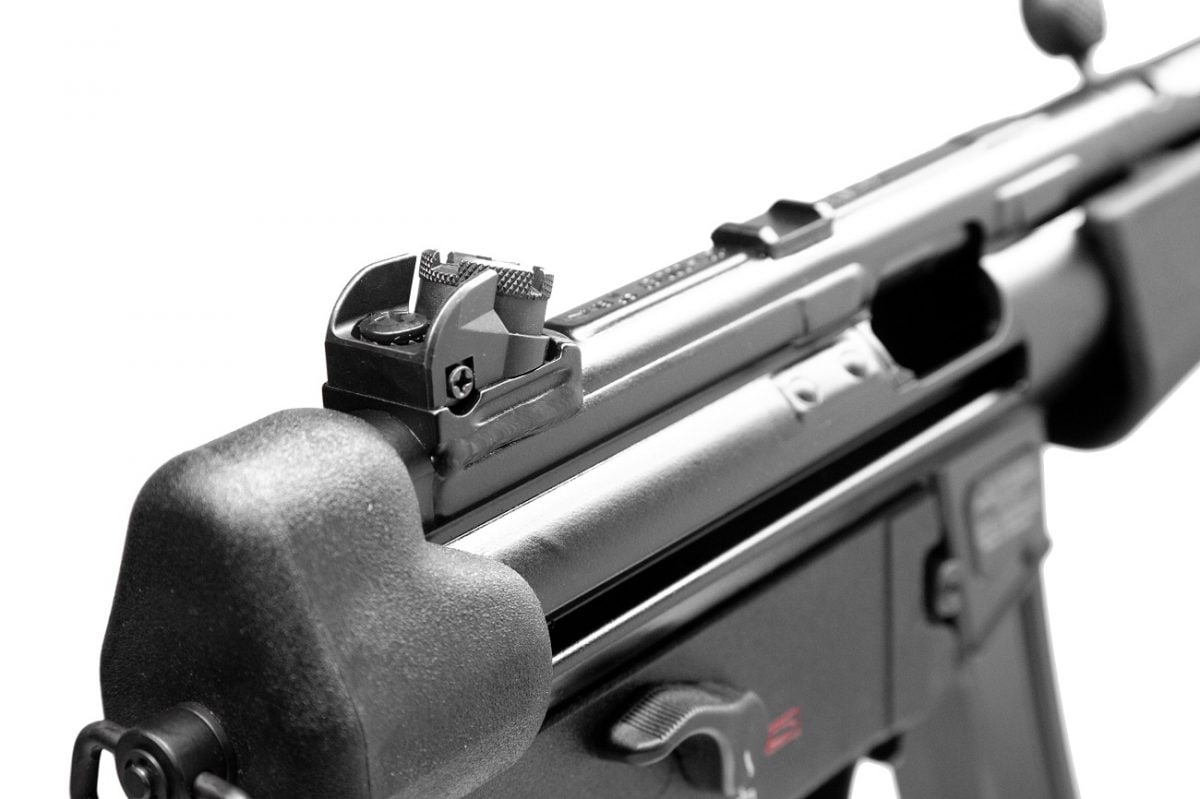 The SP5 uses a rotating MP5K type diopter sight barrel and rear sling attachment, with the latter ready for those who dig the 1980s Navy SEAL, British SAS aesthetic. Mustache and balaclava not included.

MSRP, in classic German HK mensch ärgere dich nicht fashion, is $2,799 but comes with a soft case, lifetime warranty, and two mags with a choice between factory 30-rounders or 10s depending on state restrictions. Hey, that’s the same cost as the SP5K which falls a lot shorter in features. Meanwhile, it is a good bit more expensive than the domestically-made PTR9 clone, which has been updated with M-LOK and Picatinny.

While HK explains that production is “currently limited as we still have large contracts to fulfill on other projects,” the new SP5 is said to be headed to distributors right now.

For more on the new splash, Ian McCollum with Forgotten Weapons– in a departure from historic gatts that have been out of production since before the microwave oven was invented– got to check one out in the below video.

For a second take, TFB TV goes long on the HK SP5 with James Reeves nerding out over internals. However, be sure to listen to how good the gun sounds during quiet time with a can attached.