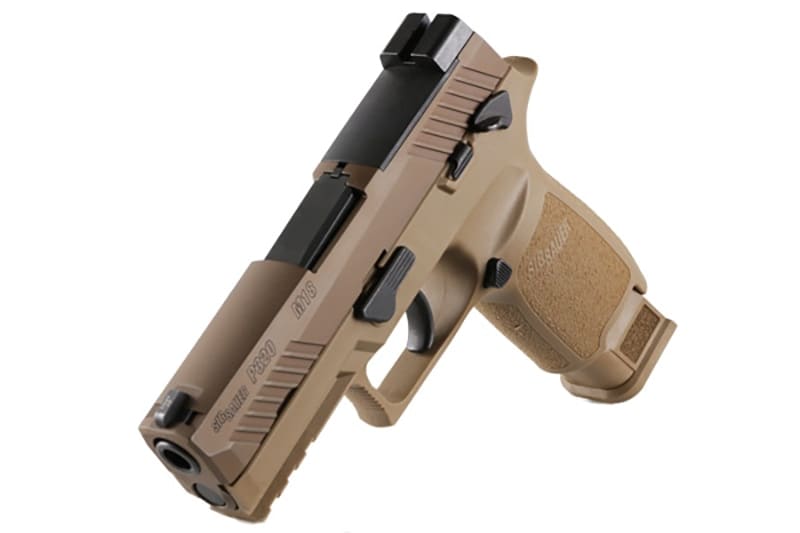 Sig Sauer is the latest company to divvy up military-inspired goods, launching a commercial version of its M18 pistol, aptly named the P320-M18.

Built on the P320 platform, the 9mm chambered P320-M18 opts for a 3.9-inch barrel nestled in a compact slide. The gun also boasts a carry length grip module, we’d assume to make it a more viable option for those that want to slip this in a holster incognito.

The P320-M18  is nearly identical to its military counterpart featuring black controls, coyote-tan coloring, and ambidextrous manual safety. Weighing in at 28.1-ounces, the gun sits 5.5-inches in height with an overall length of 7.2-inches.

The Modular Handgun System was awarded to the Sig Sauer in 2017 and included the full-size M17 as well as the compact M18. Sig Sauer reported in July that since it was awarded the MHS, over 59,000 pistols have been delivered to the government. In July 2018, the company launched its first commercial variant of the MHS offerings by way of the full-size P320-M17.

Sig said it’s no surprise that the success of the M17 and M18 spurned interest in consumers for another commercial variant, this time in a smaller package.

“Since the official selection of the M17 and M18 by the U.S. Army for the MHS, we’ve seen significant civilian interest to own both variants of the handguns,” Chief Marketing Officer Tom Taylor said in a news release. “We are very proud that with the P320-M18, civilians can now own the same innovation and versatility that has made either the M17 and M18 the handgun of choice for all branches of the U.S. Military.”

The striker-fired P320-M18 pistol ships with its own special serial number series in addition to one 17-round magazine and two 21-round magazines. The pistol sports a SigLite front sight as well as a removable night sight rear plate. Of course, if irons aren’t your thing, the slide comes optics ready for red dot action. (We suggest the company’s Romeo1.)

GRAB A ROMEO1 FROM GUNS.COM

While there’s no word yet on pricing, you can check out more on the P320-M18 via this handy video from Sig Sauer.