The World of German P-38 : Walther, Mauser, Spreewerk and Otherwise

Designed to replace the iconic Luger as Germany’s new sidearm, the pistol that became the P-38 went on to have a much longer service life.

Engineered by a pair of Fritzes– Fritz Walther, the son of Walther founder Carl, and Fritz Barthelemes– just after their work on the company’s PP-series handgun, their new gun used a lot of then-novel developments. This included twin recoil springs housed on either side of the slide and a pivoting locking block on a fixed barrel. This design, mated to a double-action/single-action trigger, was unique at the time. Compared to the complex toggle action of the Luger, the Walther P-38 was simple and reliable. 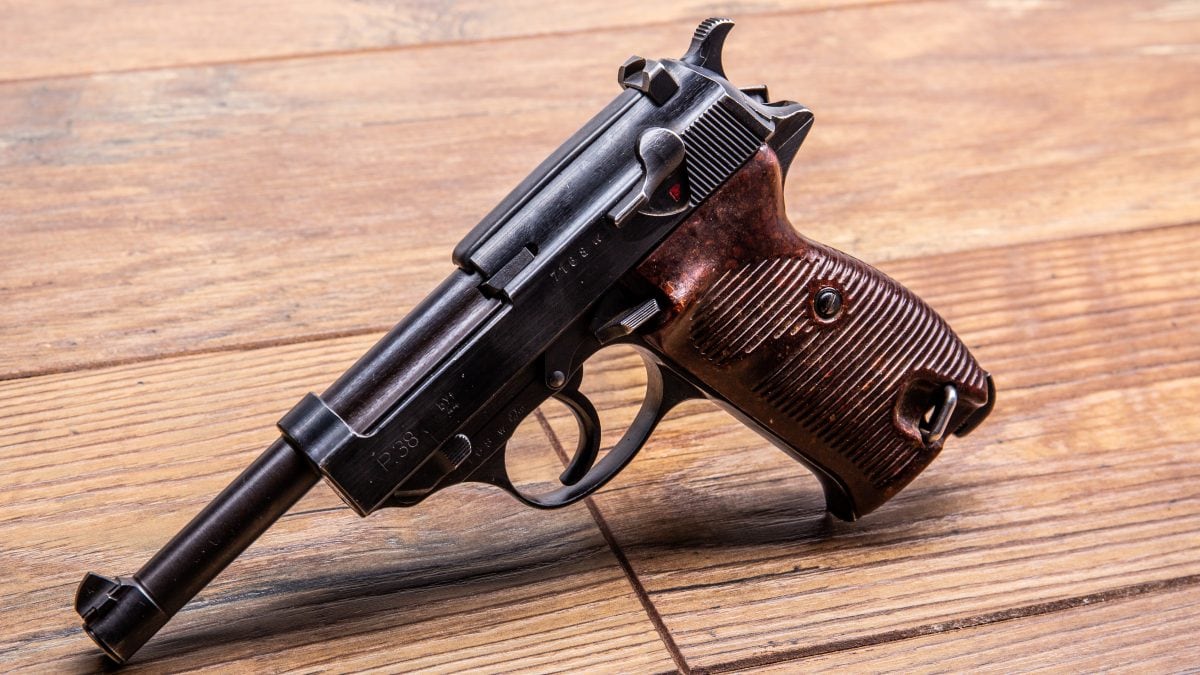 Often seen as second-fiddle to the Luger by collectors, the design of the P-38 was much more advanced than the pistol it was meant to replace. (Photo: Richard Taylor/Guns.com)

Adopted in 1938 after a two-year prototype period, the first standard military P-38s were only put into production in October 1940. Using a 5-inch barrel, an 8-shot detachable magazine, composite grips slotted around a lanyard attachment, and fixed sights, the pistol proved popular with the German military and was soon in production by not only Walther but Mauser and Spreewerk as well.

German military acceptance codes varied from manufacturer to manufacturer, with Walther issued the “ac” code to designate their wartime guns, and such codes are seen on both PPs and P38s. 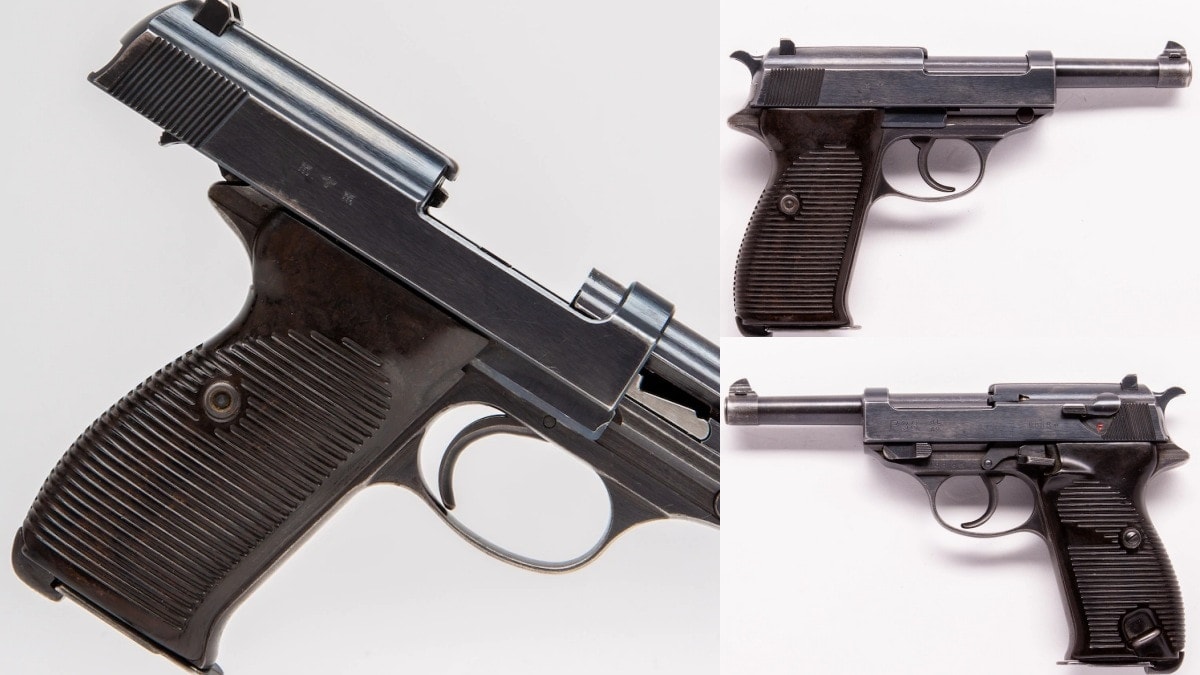 While you won’t find the word “Walther” anywhere on the pistol, this “ac 42” marked P38 was produced at the company’s Zella-Mehlis factory while several E/359 acceptance codes show it was taken into service by the Germans. The serial number dates to about June 1942, which coincides with the fall of Tobruk in North Africa. 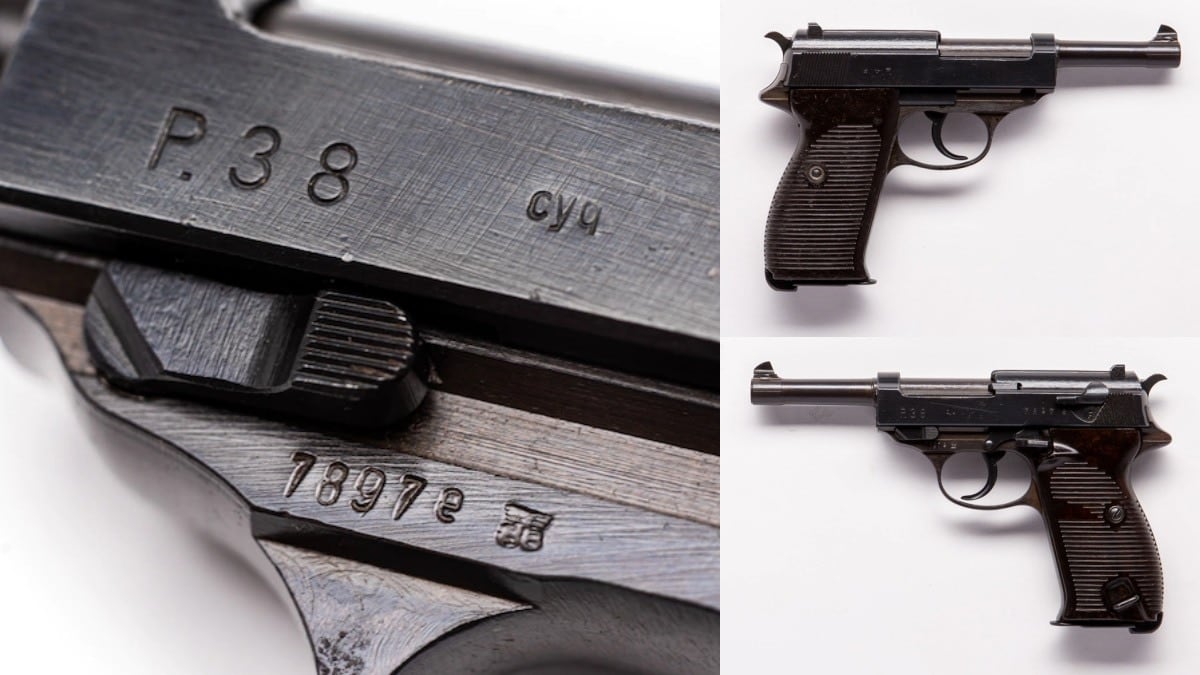 Spreewerk produced P-38s at their facility in Grottau, Czechoslovakia under the “cyq” and “cvq” manufacturer’s code. This pistol’s “cyq” code, “WaA88” Waffenamt inspector’s marks and 7897e serial number puts its manufacture about July 1943. To put this into historical perspective, this is the same month that the Allied invasion of Sicily, codenamed Operation Husky, kicked off. The pistol also has distinctive 1W-marked Posselt grips, which were made of a combination of phenolic resin mixed with sawdust, correct for Spreewerk P38s made from 1943 to the end of the war. 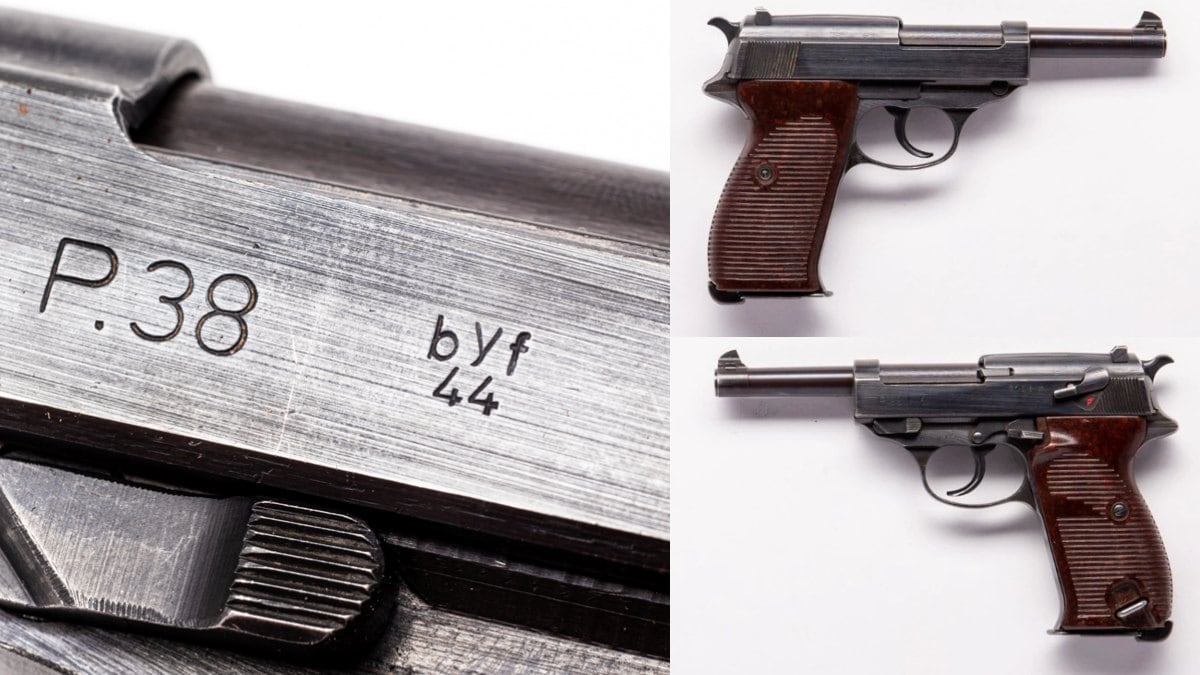 Mauser made P-38s at their facility in Oberndorf am Neckar in 1942 under a variety of manufacturer’s codes. This pistol’s “byf 44” code, “WaA145” Waffenamt inspector’s marks and 7168w serial number puts its manufacture about July 1944. To put this into historical perspective, this is just after the famous D-Day invasion in Normandy. The pistol also has ribbed phenolic AEG Grips, which are correct to period Mauser-made P38s.

In all, over a million P-38s were produced in wartime Germany for both military and police issue. With such a huge glut of guns surrendered in 1945, thousands were brought back both by U.S. Servicemen to America as trophies and were impounded by Allied forces. Notably, the Russians still have thousands in arsenal storage although they gave away crate loads as an aid to budding Communist regimes around the world during the Cold War.

The three wartime P-38s makers all lost their factories during the conflict. This led to the production in France by Manurhin which we won’t get into here.

For Carl Walther, they would rebuild in Ulm, West Germany in 1953. Within a few years, they were making the iconic P-38 once again– this time with their traditional banner logos. This would include short-barreled P-38K variants, curious long-barreled Lang models, and the reinforced P-38 II.

In 1956, Walther introduced an updated P-38, adopted by the West German police and military as the P1. Using an aluminum frame, it was somewhat lighter. Also gone were the lined Bakelite grips, replaced by black plastic panels with a pebbled texture. 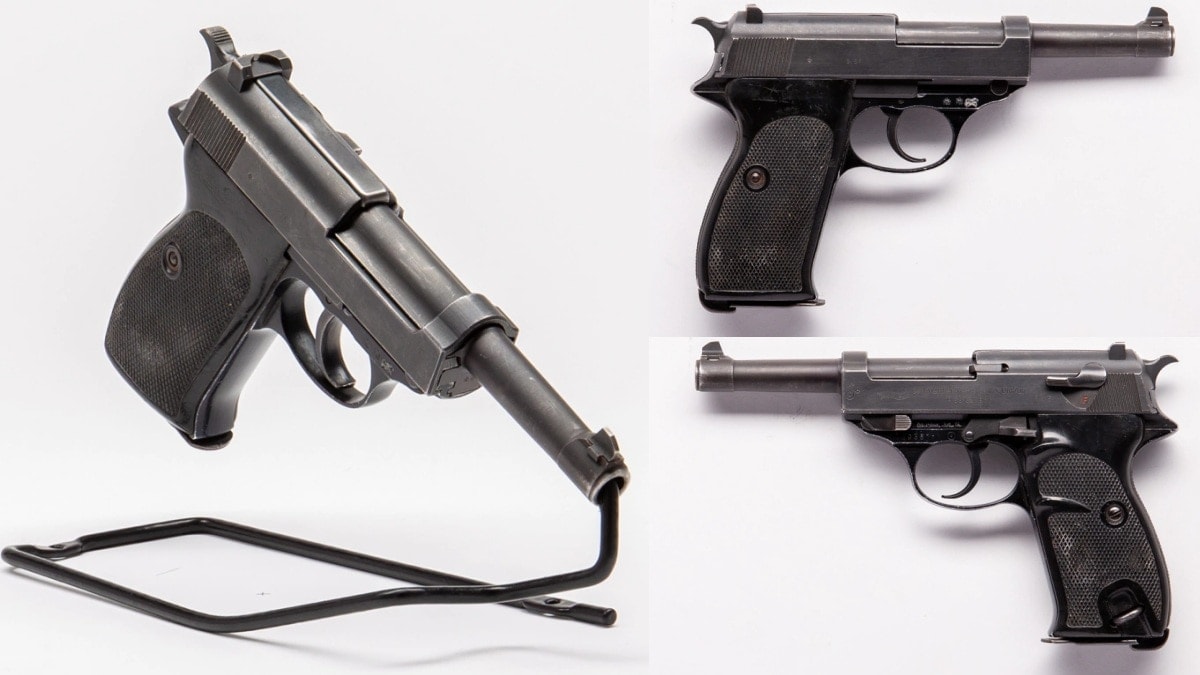 This Walther P1 is date coded September 1961, about the time that the Berlin Wall was being built. Note the aluminum frame and pebble-style plastic grips.

The P1 series remained the go-to German military handgun until it was replaced by the HK P8, a gently modified version of that company’s USP, in 1998. With that, the P-38 line was put to pasture in 2000.

As one final update to the P-38 line, Walther in 1975 produced the slightly shorter P4 pistol which had both a reinforcing bolt in the aluminum frame and a 4.5-inch barrel. These guns were adopted by several West German police forces as well as the country’s border guard (Bundesgrenzschutz) and customs (Zoll) agencies. Production on this variant of the P-38 ended in 1981. 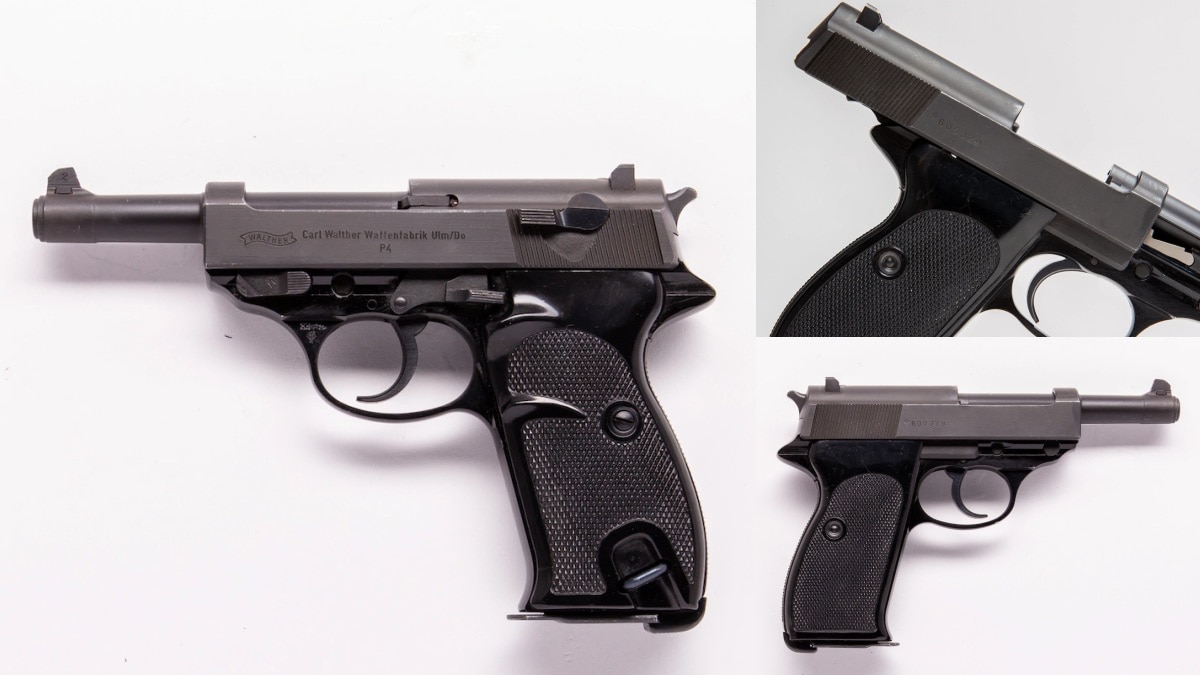 This rarely encountered Walther P4 in excellent shape has a serial number range that puts its birthdate at around May 1976. It’s just looking for a good home with someone who will appreciate it.

Although still encountered around the world, the days of the P-38 as a military sidearm are numbered. One of the last NATO users of the platform, Portugal, announced earlier this year that they have selected new Glocks to replace their vintage German parabellums. 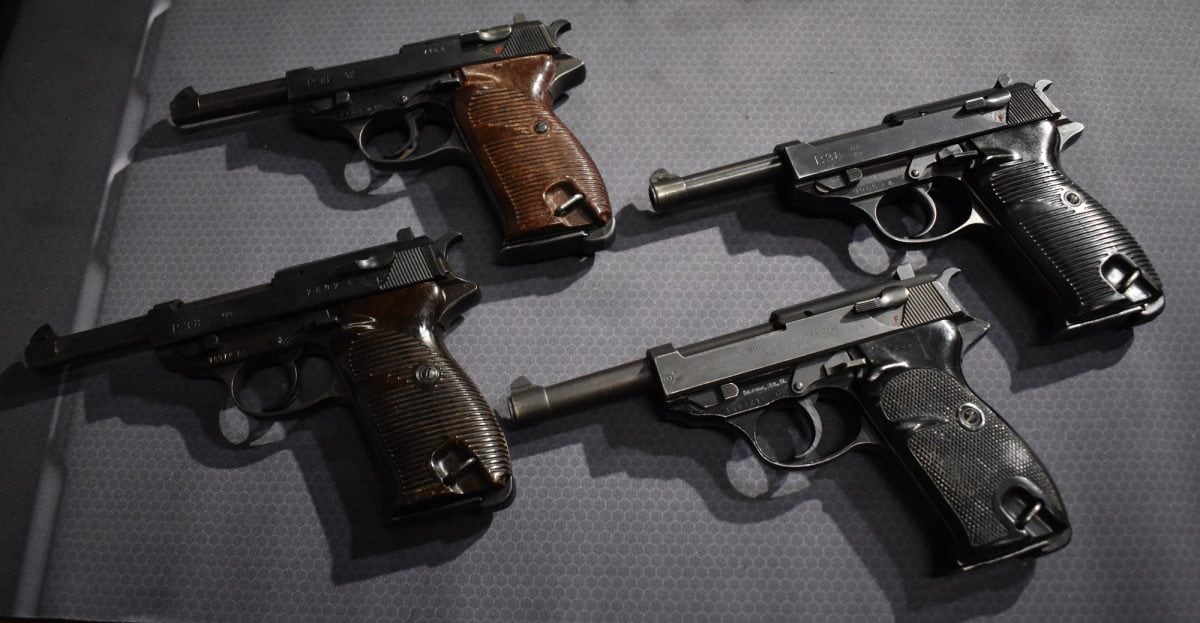 History is just one click away. (Photo: Chris Eger/Guns.com)

If you like interesting and often rare guns like the P-38, be sure to check out our Collector’s Corner or look through our entire catalog of more than 3,000 new and used guns of all sorts.