The Battle of the Bulge at 75: The Guns They Carried 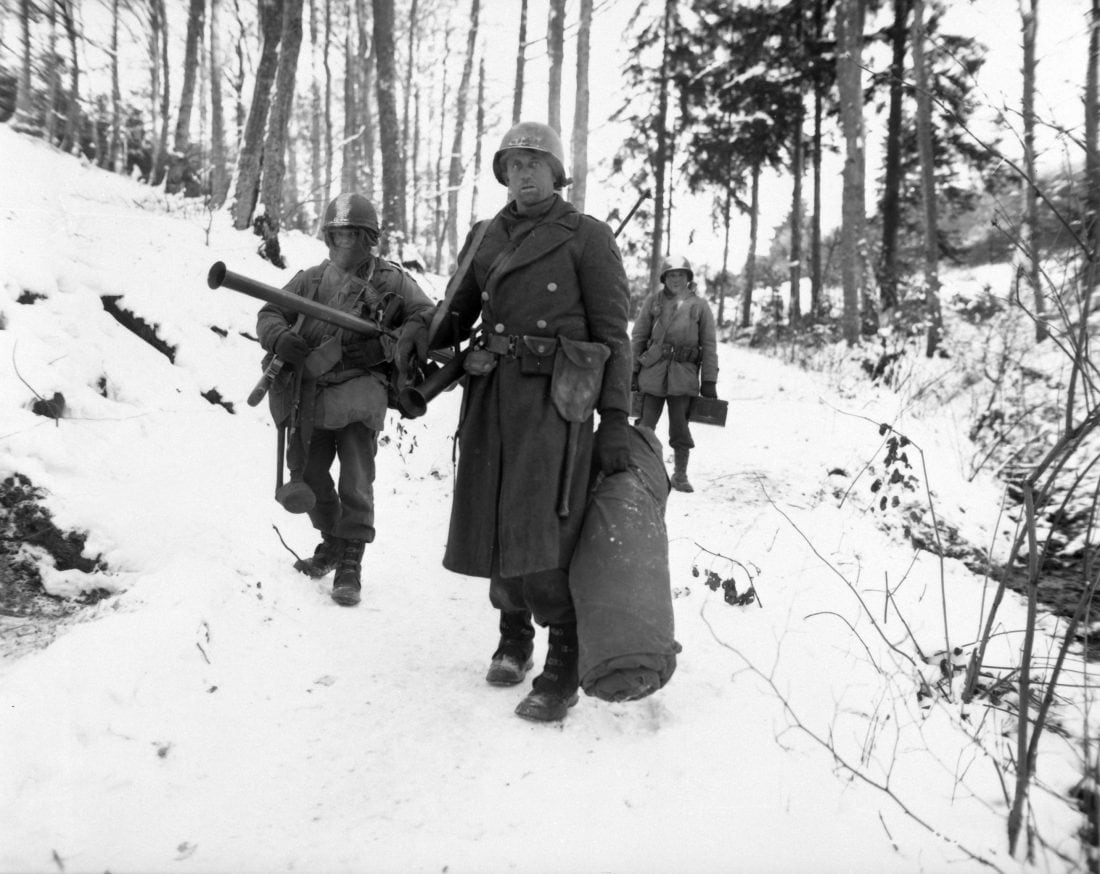 American engineers emerge from the woods and move out of defensive positions after fighting in the vicinity of Bastogne, Belgium, in December 1944. Note the M1 Garand, M1 Carbine and M9 Bazookas, along with a liberal sprinkling of grenades and spare ammo. (Photo: U.S. Army)

Some 75 years ago this week, Hitler launched the last great German offensive through the densely forested Ardennes region near the intersection of the eastern borders of Belgium, France, and Luxembourg.

Codenamed “Operation Watch on the Rhine” over 200,000 Germans, including some of the most crack troops still available to Berlin at the time, crashed upon 80,000 American troops, including many units such as the 101st Airborne, who were under strength following heavy losses and looking forward to some time in a “quiet area” to regroup.

However, for the men trapped inside the 75-mile “bulged” salient from St. Vith to the week-long Siege of Bastogne, it was a white hell of exploding trees and an onslaught from 1,000 German panzers that those who survived never forgot. 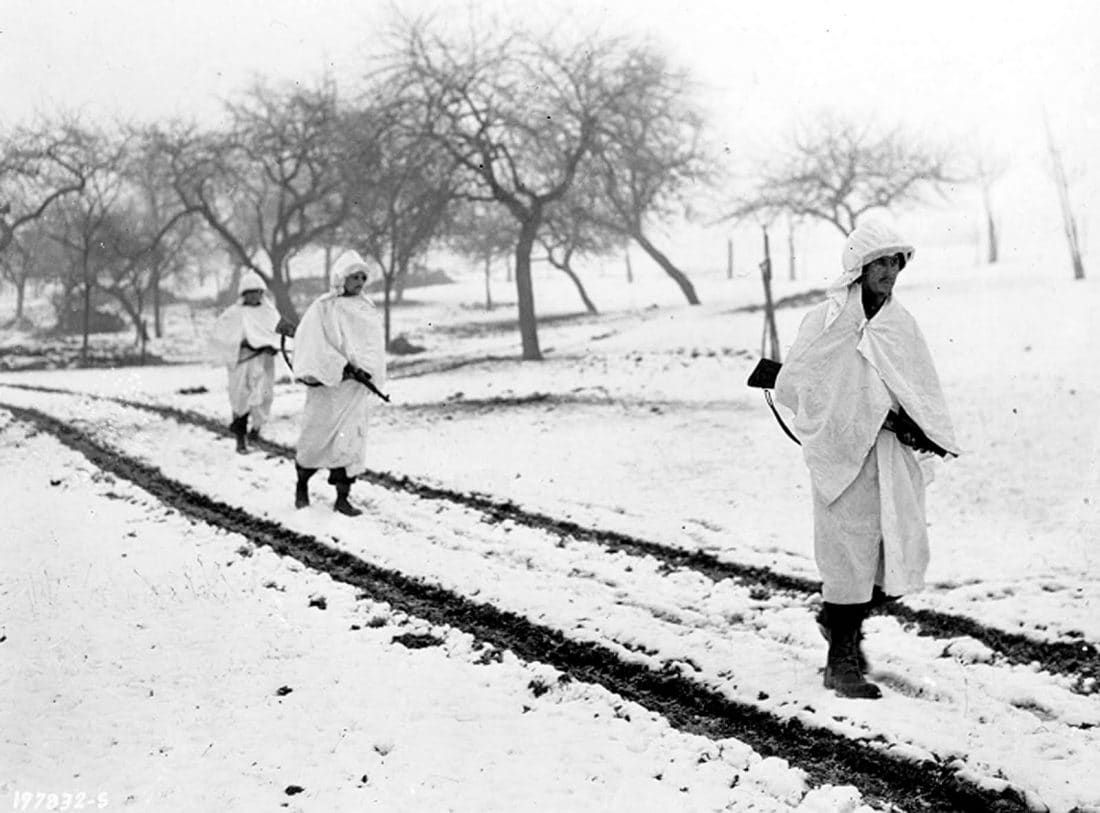 The primary U.S. Army rifle of World War II was the M1 Garand. Designed by Canadian-born Springfield Armory engineer Jean Cantius Garand, the .30-06 caliber semi-automatic was fed with an eight-round en-bloc clip through the top of the receiver. Adopted in 1937, about 5.4 million of the rifles were produced during the conflict by Springfield and Winchester. 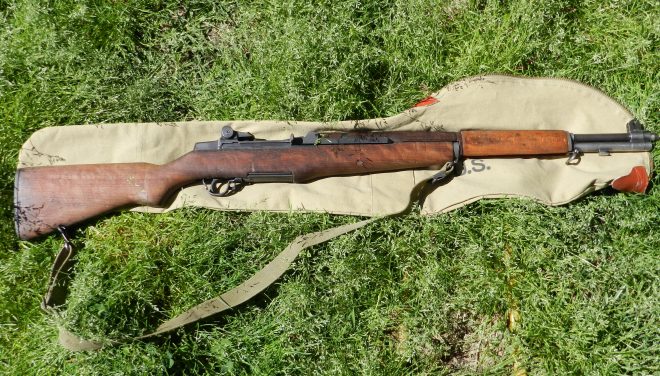 The 9.5-pound Garand, officially ” U.S. rifle, caliber .30, M1″ had a 24-inch barrel and wooden furniture. They cost the Army about $85 to produce during WWII and remained the standard American military rifle until the select-fire M14 came along in 1957. (Photo: Chris Eger/Guns.com)

Also there, in the hands of support troops such as engineers — or when equipped with a Weaver scope given to infantry snipers — was the M1903 Springfield. A bolt-action Mauser-style rifle, the M1903 had been adopted by the U.S. military back during the administration of President Theodore Roosevelt, had officially been replaced by the Garand but was modified and put back into production in 1941 by Remington and the Smith-Corona Typewriter Company. 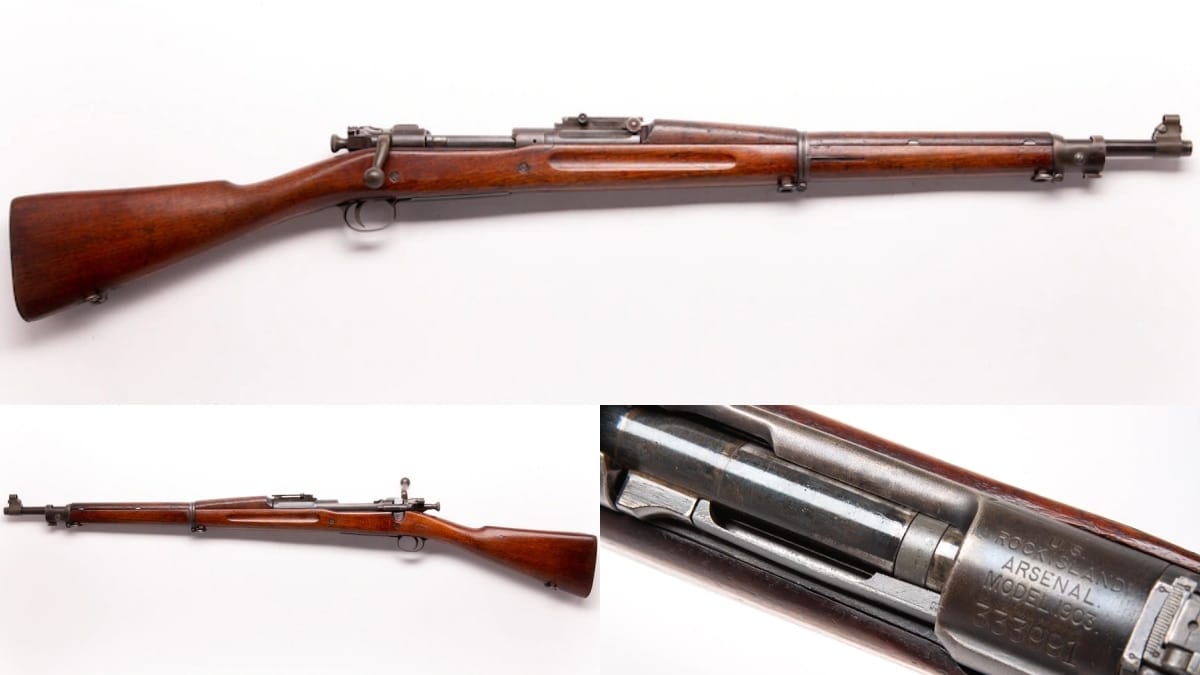 This M1903 in the Guns.com Vault has a 1918 RIA receiver but with a Springfield 1927 marked barrel, meaning it was likely a transitional model rebuilt in arsenal between the wars.

A more pint-sized weapon, the M1 Carbine, was a “war baby” of sorts, as it only started production in 1942 as a compact rifle for use by support troops such as mortar crews, radiomen and truck drivers. Tipping the scales at just 5-pounds, the semi-auto used a detachable 15-round magazine and fired the 7.62x33mm .30 Carbine cartridge. 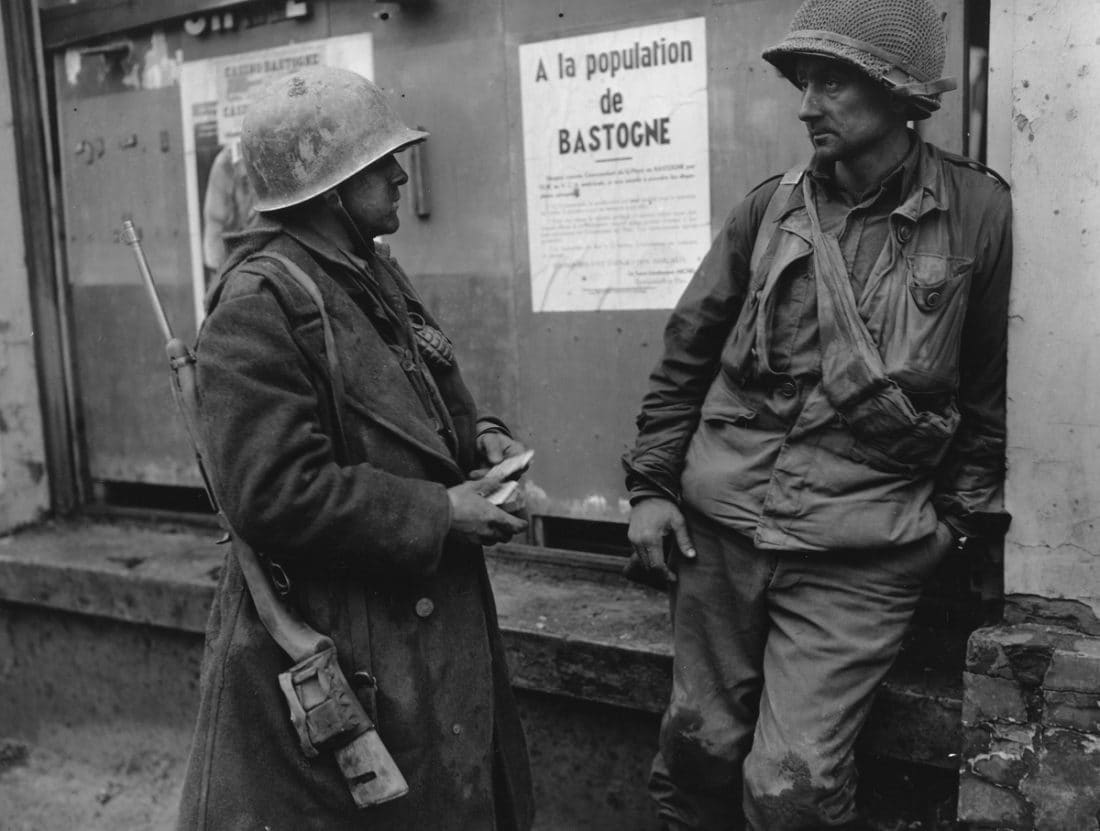 Bastogne Belgium-Weary infantrymen of the 110th Regt., 28th Div., US 1st Army following the German breakthrough in that area. The enemy overran their battalion. (L-R) Pvt. Adam H. Davis and T/S Milford A. Sillars. Dec. 19, 1944. Note the M1 Carbine over the shoulder of the soldier on the left (Photo: National Archives)

In all, over 5 million M1 Carbines were produced by companies as varied as Winchester, General Motor’s Inland Division, National Postal Meter (guess what they made), jukebox maker Rock-Ola, and typewriter companies IBM and Underwood. 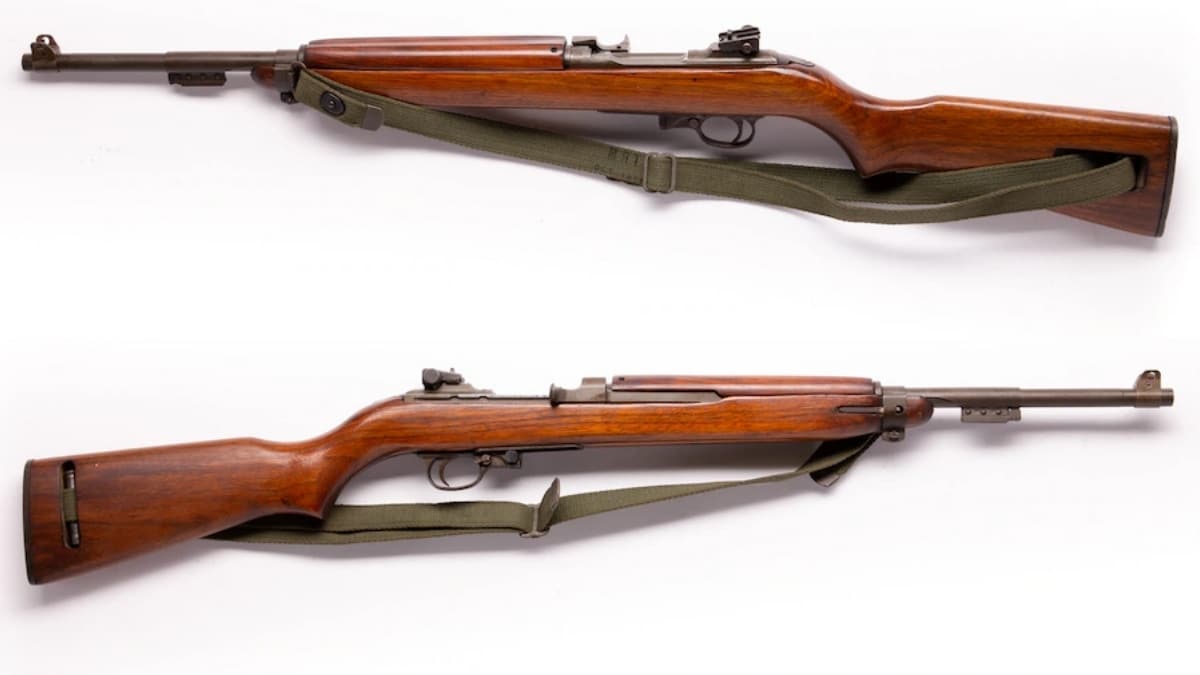 The M1 Carbine cost Uncle Sam $45 a pop to make during WWII, meaning about two of these compact light rifles could be bought for the price of each Garand. This Winchester-made example in the Guns.com Vault is a wartime-era carbine.

Generally reserved for use by sergeants, field-grade officers and specialist troops, the simplified wartime variant of the Auto-Ordnance Thompson– confusingly designated the M1, a label shared by both the Garand and Carbine– was heavy at 10-pounds but delivered .45ACP rounds at 700 rounds-per-minute. Although the original Colt-produced M1921 “Tommy Gun” of Prohibition bootlegger fame retailed at around $225 at the time, its WWII descendant, with a more basic layout, came in at $70.

The Thompson, in both M1928 and M1/M1A1 variants, was common in the Ardennes in the winter of 1944-45. However, they were already headed out of production in favor of the smaller, and much cheaper, M3 Grease Gun, especially with Patton’s tank crews. 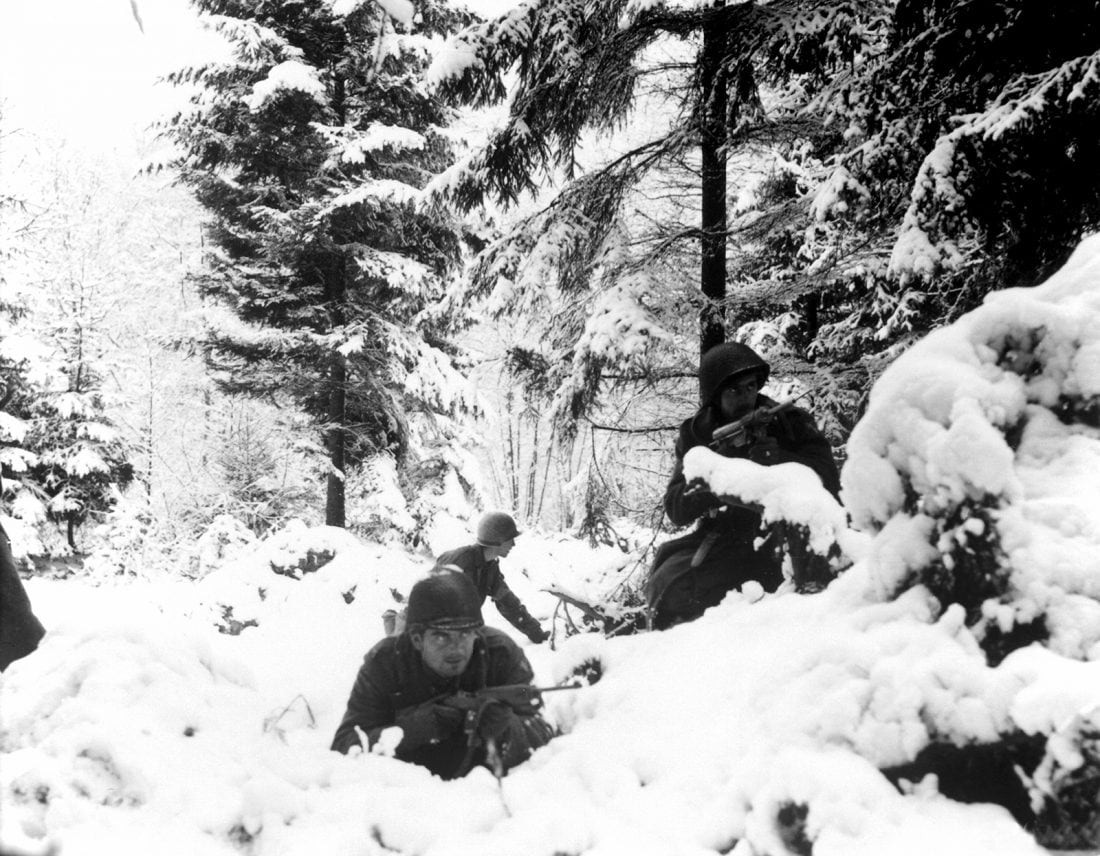 U.S. Army infantrymen of the 290th Regiment, 75th Infantry Division, fight in fresh snowfall near Amonines, Belgium during the Battle of the Bulge, Jan. 4, 1945. Note the M3 Grease Gun to the right and M1 Carbine to the left. (Photo: U.S. Army)

Filling the gap between rifles and crew-served machine guns such as the M1919 was John Browning’s M1918 BAR. Capable of chewing through .30-06 rounds at 500-600 rounds-per-minute, the BAR could drain a 20-round detachable box magazine in just two seconds when wide open. Invented to help end the stalemate in the trenches in World War I, the hefty 23-pound automatic rifle was employed by a single man rather than a crew– a facet that made it hated by those on both sides of the muzzle, although for different reasons.

Speaking of Mr. Browning, while a few revolvers such as the M1917 and Victory-series .38s were carried, the standard handgun of the U.S. Army in Europe in 1944 and for decades both before and after was the M1911. Designed by Browning for Colt on the eve of WWI, the classic 7+1 .45ACP Government Issue longslide is iconic. 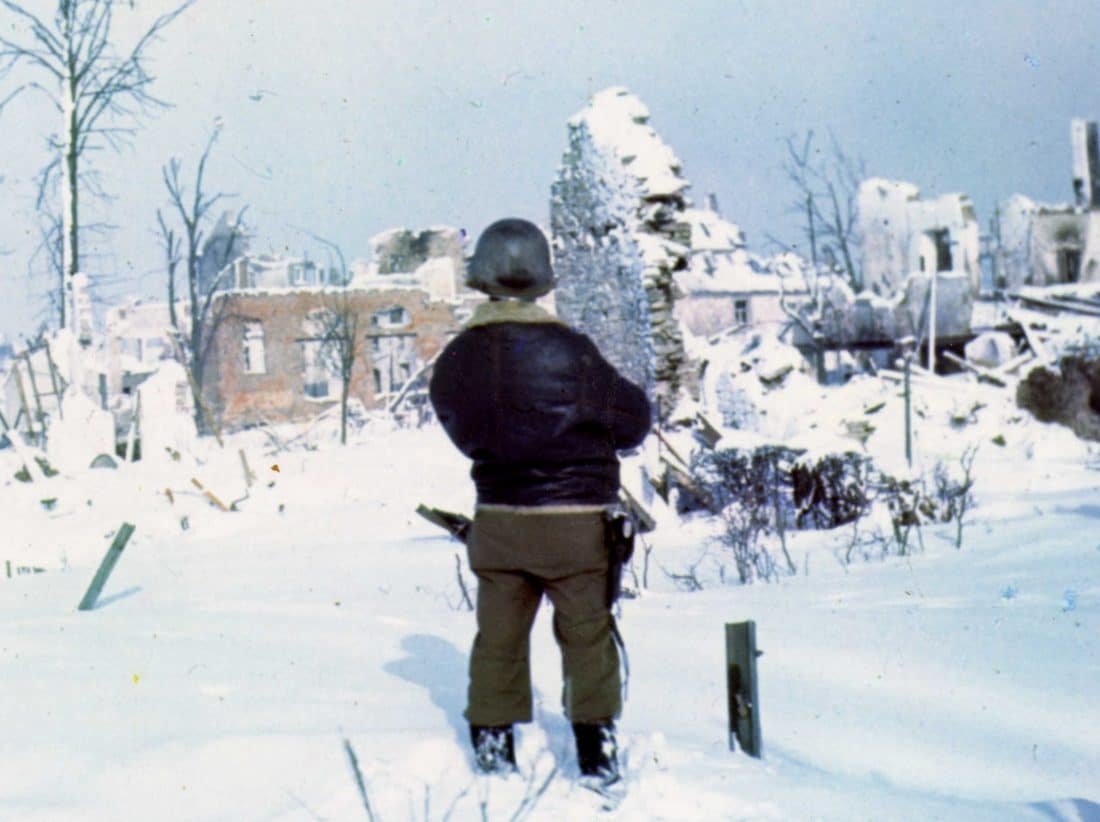 Wreckage in St. Vith, Belgium, after units of the 7th Armored Division, took the town, Jan 1945. Note the M1911 in the holster of the tank crewman (Photo: National Archives)

Almost 2 million of these handguns were produced during WWII by not only Colt but also Ithaca, Remington Rand, Union Switch & Signal, and Singer at an average cost of $15. They were only replaced by the M9, a modified Beretta 92, in 1986. 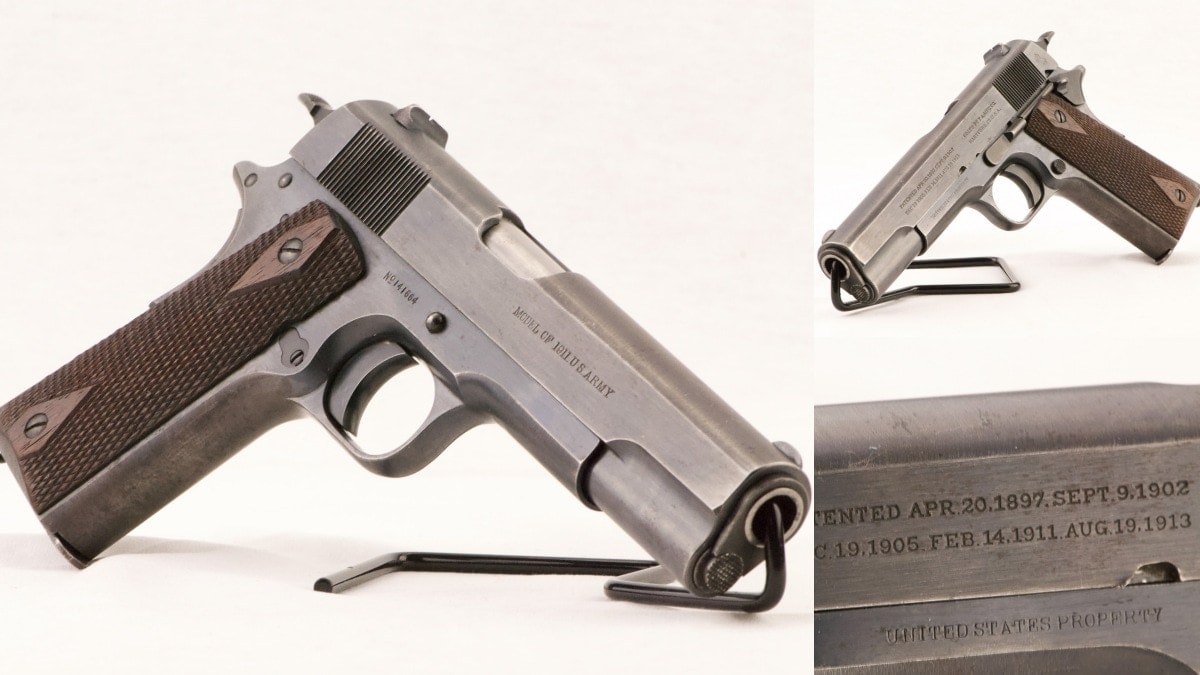 This 1911 in the Guns.com Vault is a WWI-production military handgun from 1917. Ordnance markings of H and P show this handgun came through the Hartford Arsenal, and a Type 2 second iteration Colt logo confirms its 1915 manufacture date. Additional final inspection GHS markings also prove that this handgun was the property of the U.S. Army when it was made.

The U.S. Army suffered over 89,000 casualties in the six-week-long Battle of the Bulge, making it one of the largest and bloodiest battles fought by the nation’s servicemen.

For a more detailed look at the men, firepower, and background of the battle, check out the (free) 685-page U.S. Army Center of Military History reference, “The Ardennes: Battle of the Bulge” by Hugh M. Cole, as well as the vast records available through the National Archives. For more information about commemorating the battle Bastogne and other events, visit Bastogne 75 and Belgium Remembers 44-45.

If you like interesting and often rare guns like these, be sure to check out our Collector’s Corner or look through our entire catalog of more than 3,000 new and used guns of all sorts.