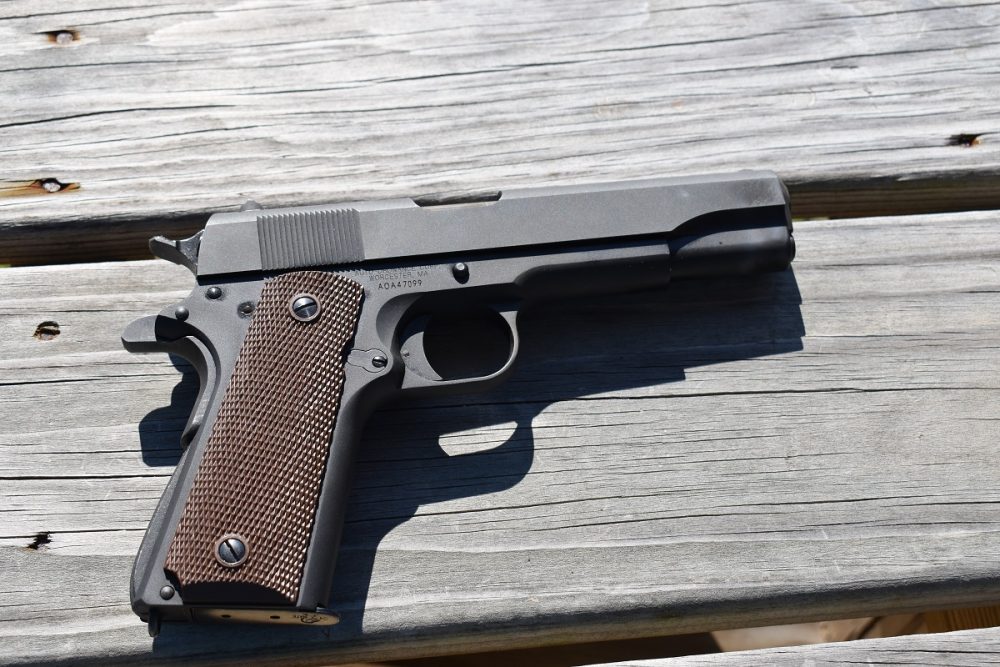 The 1911 BKO, by Auto-Ordnance, is an 80-series GI 45 that looks good on the outside and still clocks in for work at the range. (All Photos: Chris Eger/Guns.com)

Since 1999, the Kahr Firearms Group has included the AO brand in its portfolio, with production at the company’s current Worcester, Mass facility. Their 1911 BKO longslide is an ode to the famous M1911A1 line used by the U.S. military from 1926 to the last days of the Cold War. 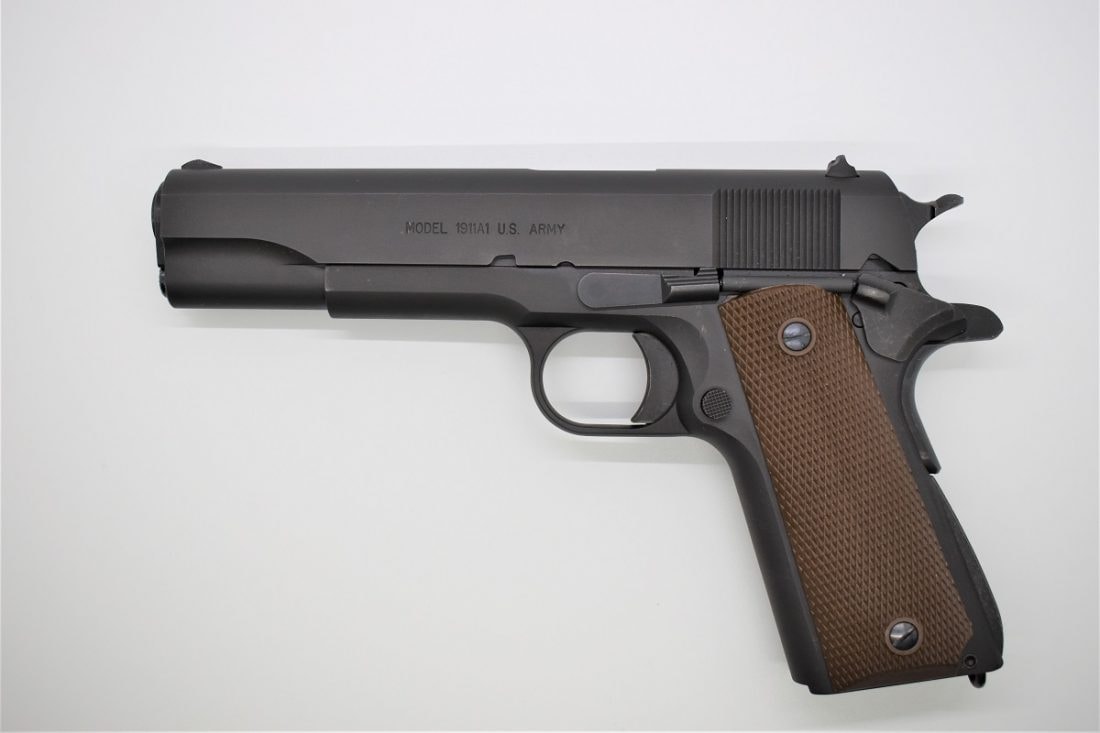 The Auto-Ordnance incorporates GI specs, with a standard 5-inch barrel and an 8.5-inch overall length. 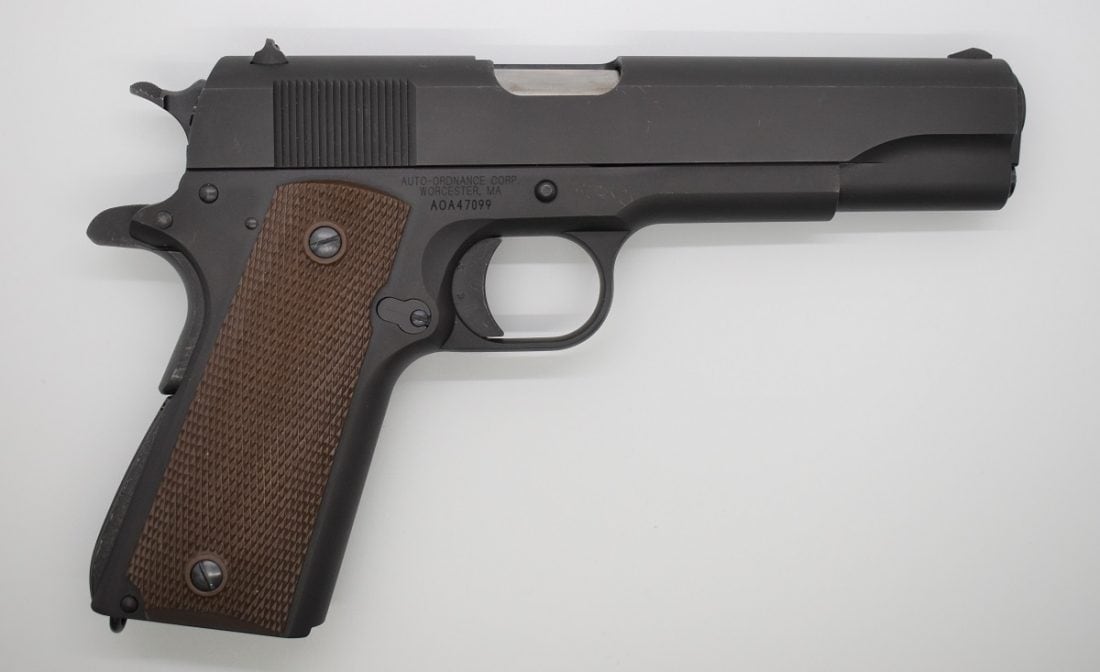 The “BKO” means a black oxide finish on the frame, barrel, and slide.

The company machines the slide, sear, and disconnector from solid carbon bar stock, then heat treats them “to assure durability and long life over many thousands of rounds.” As with the old-school GI guns, the Auto-Ordnance pistol has a low-profile blade front sight and a rear sight, with the latter being drift adjustable for windage.

The grip is brown checkered plastic on the review gun, a clone of the WWII-era 1911 grips that were adopted after the earlier double-diamond walnut grips were discontinued before WWII. 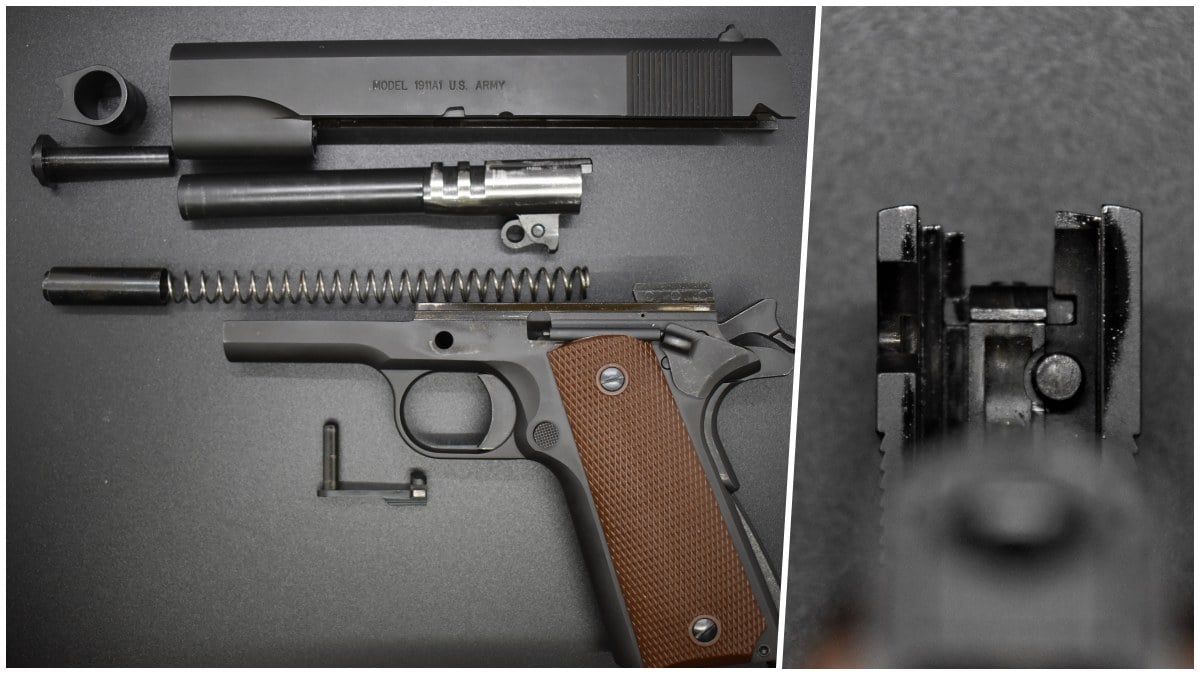 Internally, you have much as you would expect on a modern M1911. Of note, the gun is an 80-series and uses a firing pin block.

But Does it Shoot?

We hit the range with a fresh 1911 BKO right out of the box from Auto-Ordnance with no extra lube or treatment. After a brief field strip and function check to make sure everything was there, we fed the test gun a steady diet drawn from across a field of factory .45ACP ammo suppliers including CCI, Federal, PMC and Winchester. 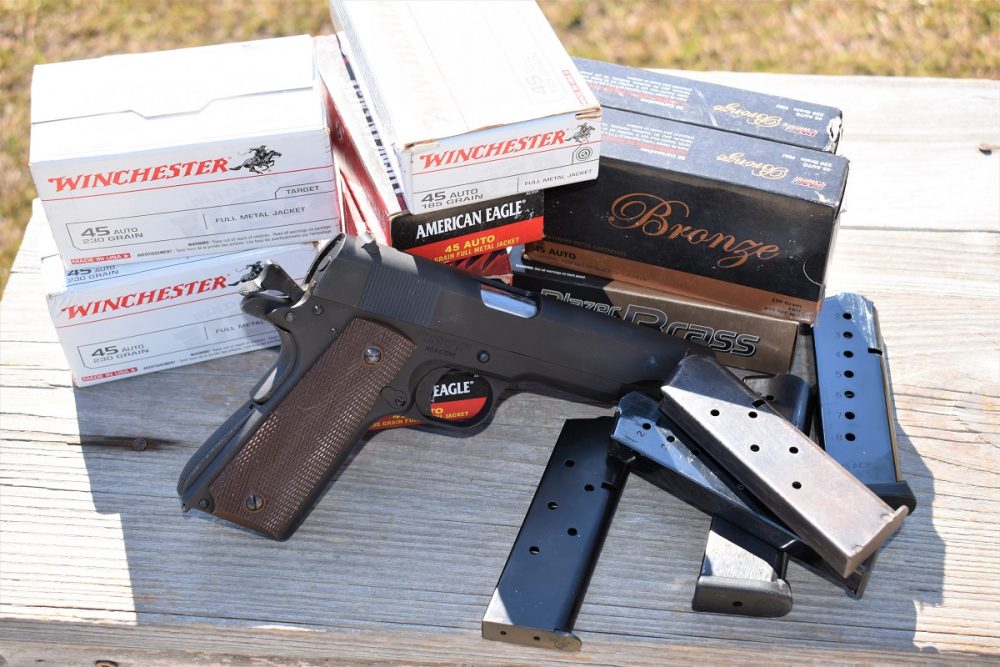 In all, we shot some 600 rounds of Winchester white box, PMC Bronze, Blazer Brass, and Federal American Eagle in 185 and 230-grain flavors.

To see how the gun performed with a wide range of magazines– and because the gun only ships with a single CheckMate 1911 single-stack– we threw in some Sarco specials, a few GI surplus mags, and a couple of Novak and CMC mags to liven things up. Other than the CheckMate that came from AO, none of the mags were new.

To further beg for problems, we alternated loads in the magazines, using typically four or more different loadings in each mag. Because we all know that guy who keeps loose assorted rounds of mixed ancestry in a coffee can for his “Fuddy-Five.” 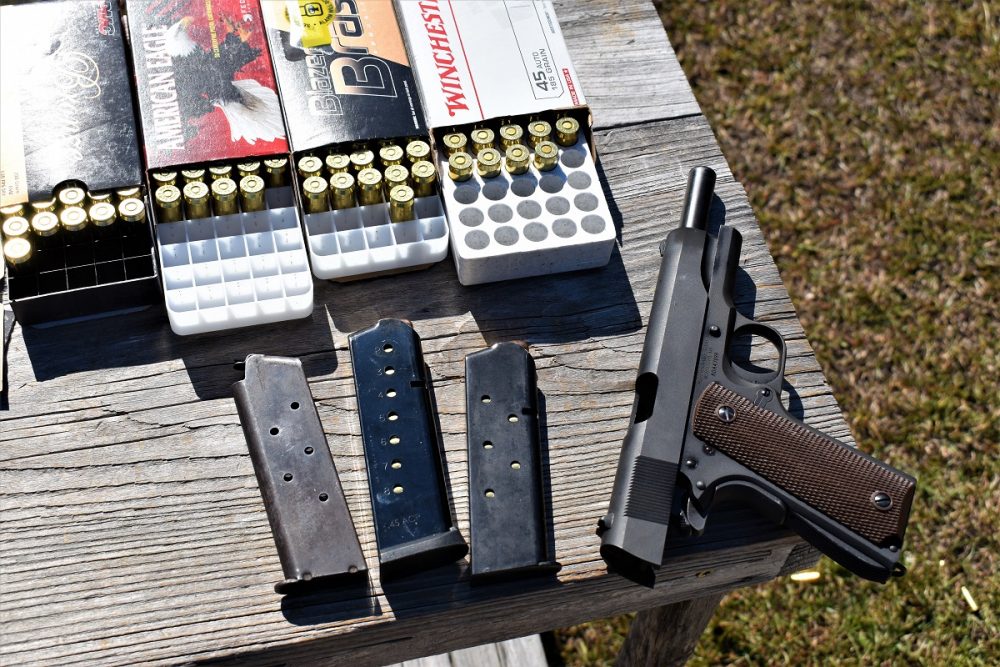 Who wants a jam recipe?

The result: two jams on a rusty ASSY-marked GI mag of Vietnam issue, both on the last round in the magazine. Both malfunctions were a failure to feed the 7th round fully into the chamber, a textbook case of a weakened magazine spring– in other words, not a gun issue. There were no other problems across the magazines or ammo in the course of 600 rounds fired, and no jam experiences with the factory-included mag.

Afterward, the downright filthy 1911 BKO was cleaned and inspected, showing normal wear on the metal-on-metal surfaces but no cracks or breakages.

When it comes to accuracy, the gun was more than adequate for a classicly-styled Government Issue. While no one’s idea of a National Match gun, it delivered on target out to 25-yards even with the poor, although period correct, sights. 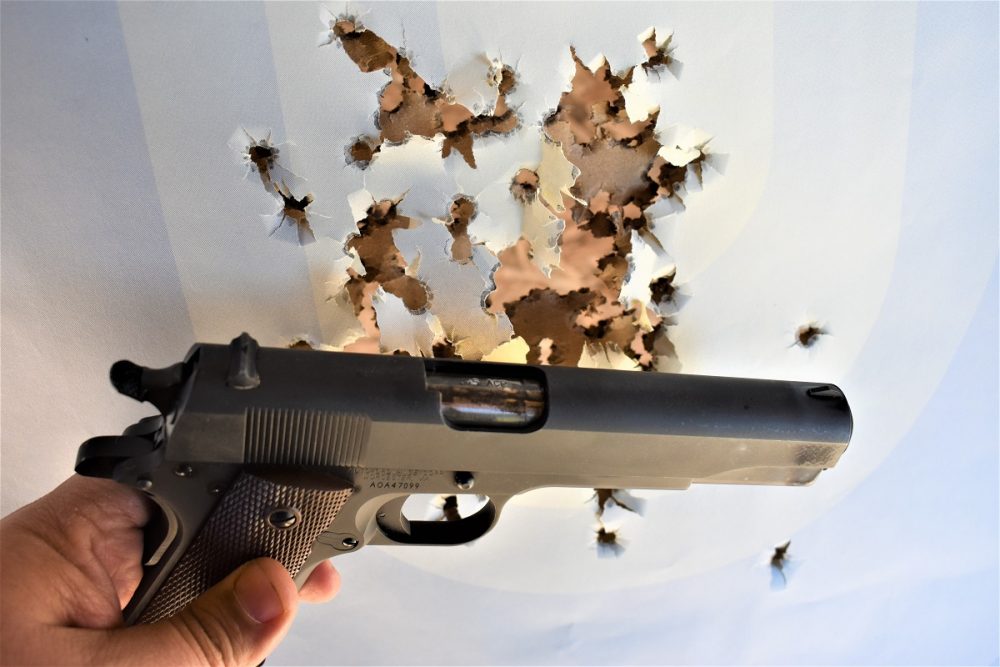 Weight is 39-ounces, unloaded, on par for other clones of John Moses Browning’s “Two World War Winner.” This translates into a gun that is easily held on target if using a proper grip with minimal recoil for follow-up shots. 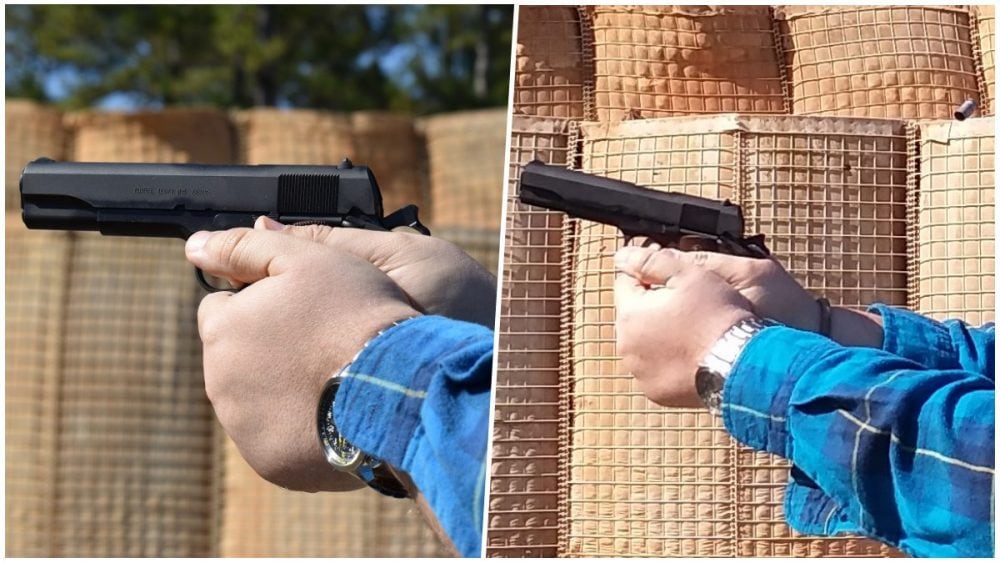 The single-action trigger was vintage 1911 in the respect that it was kinda gritty and broke at about 7.25-pounds. Did we mention that it was an 80-series gun? Of course, you could change this out but it wouldn’t be correct for a GI .45. Naturally, there is not a mag disconnect, an often detested feature found on many of today’s 1911-22s.

So what would you use the 1911 BKO for? Well, for those wanting a retro .45 that doesn’t break the bank or say “Made in the Philippines” or “Made in Turkey” on it, the Auto-Ordnance is a no-brainer. The gun looks right out of a vintage 1940s photo and clocked in briefly at a local Veteran’s Day event with a local group of WWII reenactors. 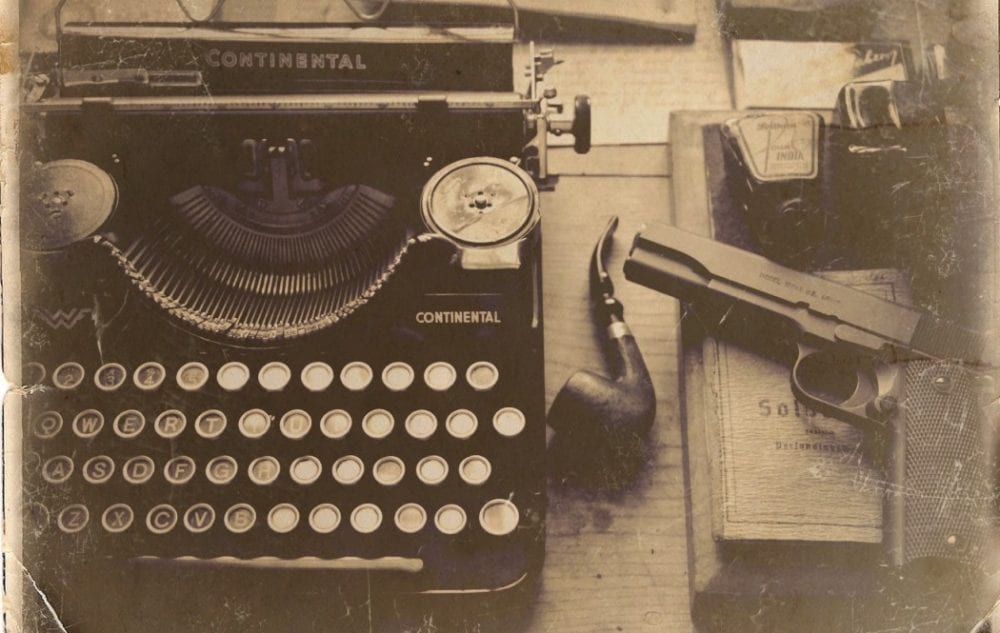 Pipe and typewriter not included…

It also proves fun at the range, where our T&E trips sparked interest from several curious members of the gun tribe, as 1911s always tend to do. There is a certain old-school cool attached to a longslide. 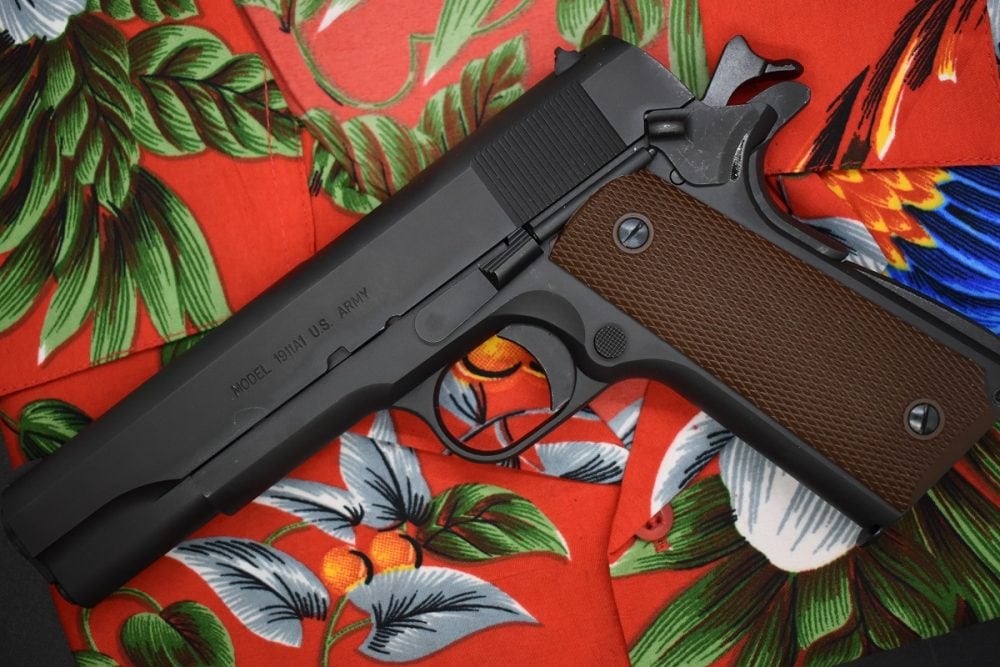 Ivan, did you see the sunrise this morning?

Finally, the frame-mounted lanyard ring proves useful in a sense. 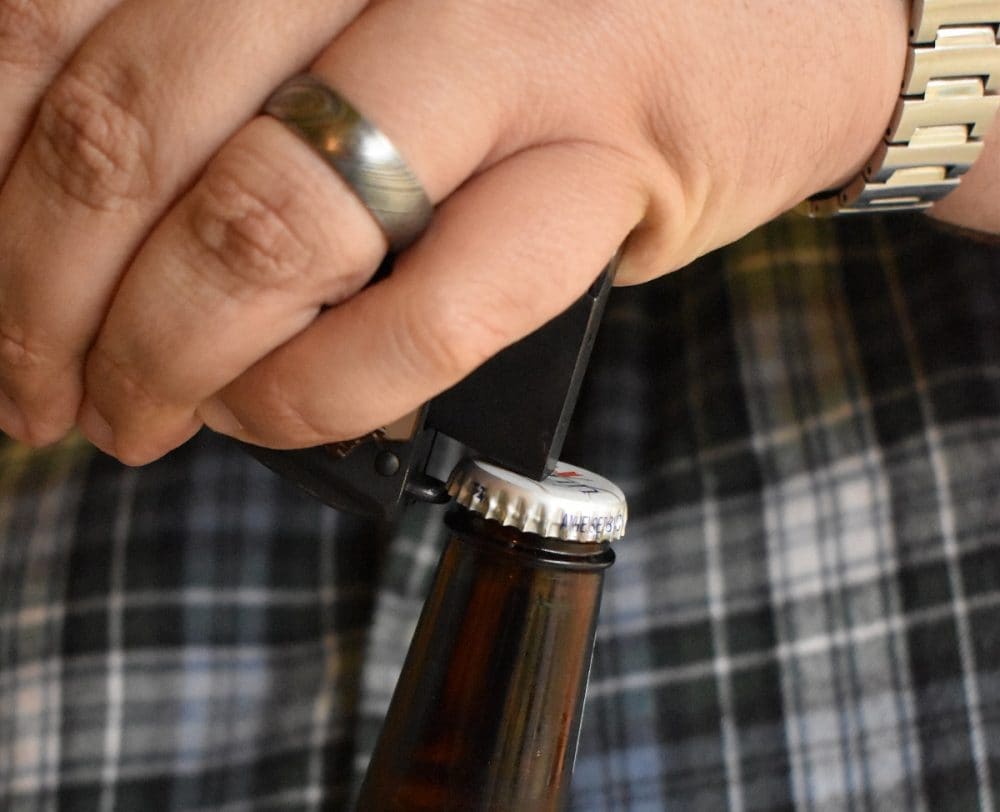 *Away from the range with an unloaded gun, of course, and watch that muzzle. If you still want to comment on this photo, lighten up.*

Home or personal defense tool? Better than a pointy stick, for sure. However, we have a final round of testing underway right now, this time with hollow-points and holsters.