A few months ago, I took a look at the Sig Sauer P238 and since then I’ve been inundated with requests to take a look at another Sig sibling – the P938. Chambered in 9mm, the P938 is yet another entry into the micro compact Sig lineup but I was curious how it stacked up next to the .380 ACP Sig P238.

Luckily, we here at Guns.com happened to have a used Sig P938 in our Vault ready to be tested. 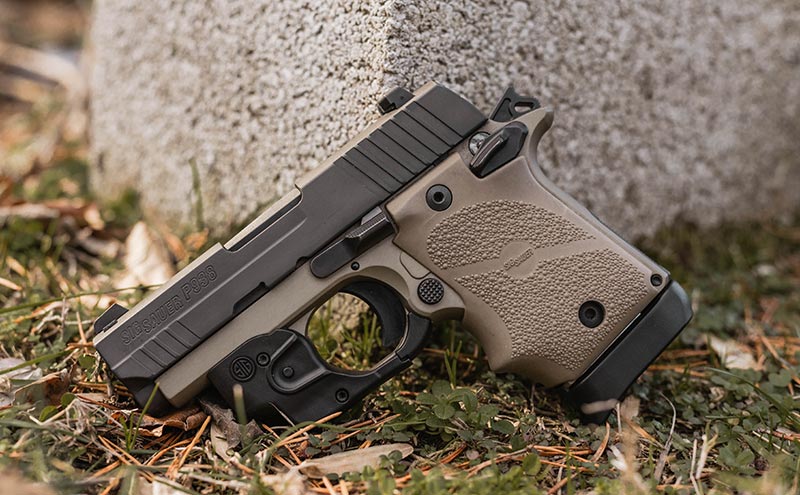 The P938 adopts a micro look and feel, measuring just 5.9-inches in length with a 3-inch barrel. Weighing in at 16-ounces, this handgun sports a capacity of 6+1. This particular model, found on Guns.com, came decked out in a nice FDE/black aesthetic featuring a black metal slide and controls with FDE frame.

Similar to the P238, the P938 opts for SigLite night sites and a manual safety. The SigLite night sights offered a brighter approach to traditional irons. Easy to acquire, the SigLite sights draw your attention to that ever-important front post so it’s easier to get shots on target. 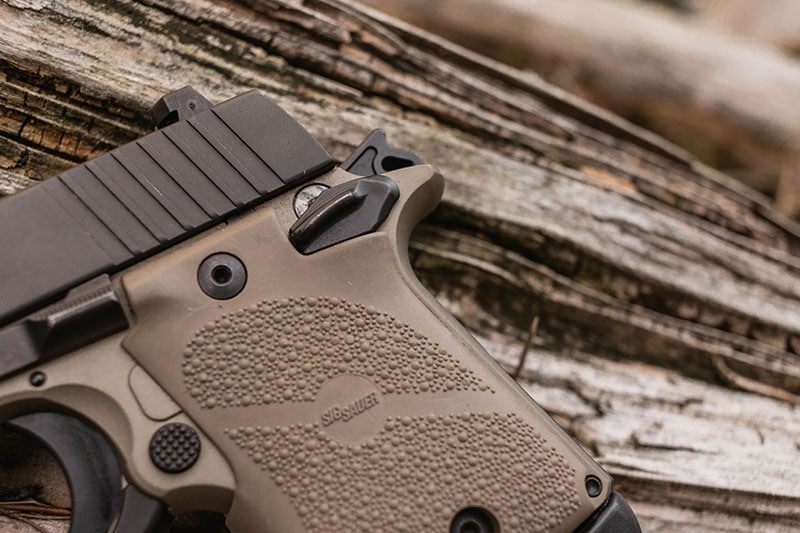 As always, my usual grip comes down to the addition of a manual safety. (Photo: Jacki Billings/Guns.com)

If you’ve followed my reviews for any length of time you know that my usual gripe is that I can’t stand manual safeties. This gun hasn’t changed my opinion. The manual safety added an extra step to my shooting process and as someone who routinely carries without one, it took some time to retrain my brain. That being said, if you are a manual safety fan – rock on. This gun has a functioning one and it’s located in a good spot, easy to flick on and off with the thumb. If you’re like me, however, and prefer your guns without manual safeties, you might want to pass on this particular model.

This gun featured a few upgrades such as a rubberized grip for a more comfortable shooting experience and a Sig branded laser attached to the trigger guard. Lasers are great tools for those learning to aim as well as gun owners looking for bedside guns; however, in the daytime, the laser proved less useful. Shooting at an 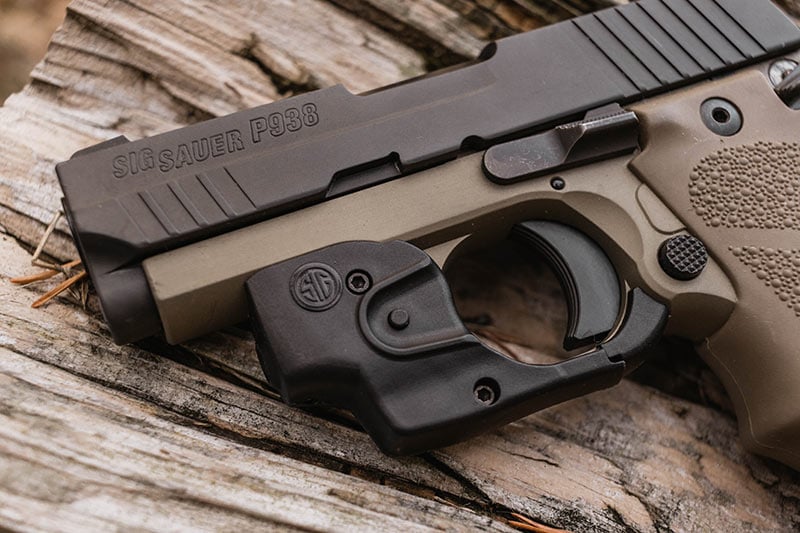 average of 7-yards, the laser was nearly impossible to see with the sun overhead. During twilight hours and at night, I had better luck seeing it.

The first thing I noticed was the size of the gun. Offering an extremely small stature, the Sig P938 definitely works for concealment. Primed as a backup gun, the Sig P938 seems comfortable nestled in a deep concealment holster or ankle rig; but the trade-off to a super small gun is in its recoil. After shooting the P238, I knew that the larger 9mm round would bring a little more oomph to the table and I was right.

Over the course of shooting, I routinely adjusted my grip as the recoil impacted the placement of my hands. I found myself tightening down more and more to compensate which led to some fatigue. This isn’t much of a surprise as most compact guns chambered in 9mm or above tend to kick a little more due to their smaller stature. 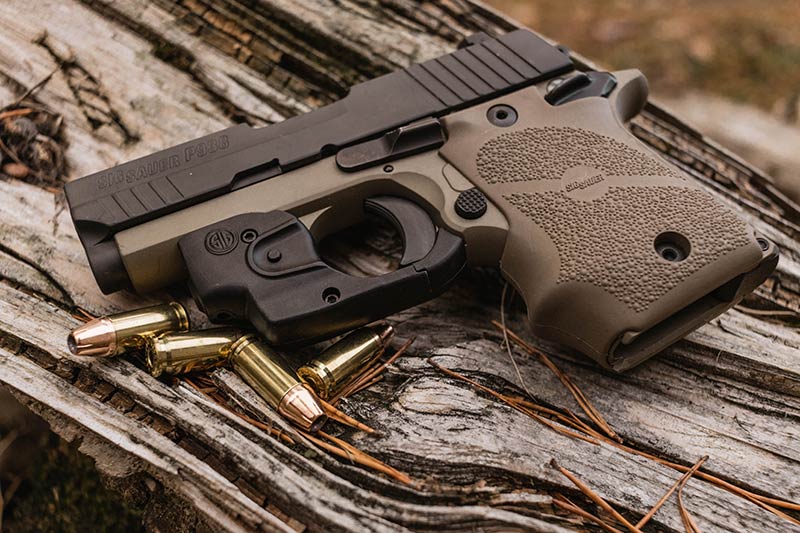 The gun did well with a variety of ammunition. (Photo: Jacki Billings/Guns.com)

Let’s be honest here, though, this gun isn’t made for long days at the range or repetitive shooting in gun courses. It’s better suited as a backup gun that you break out once a month, throw a few magazines worth of ammo in, and call it a day.

Speaking of ammo, the Sig did well in terms of reliability. I loaded my mags with Hornady Critical Defense, Federal Train + Protect, Winchester White Box and Remington UMC with no hiccups. I even mixed some ammo up to see if that would trip a malfunction and it did not. The P938, by all accounts, functions as intended. 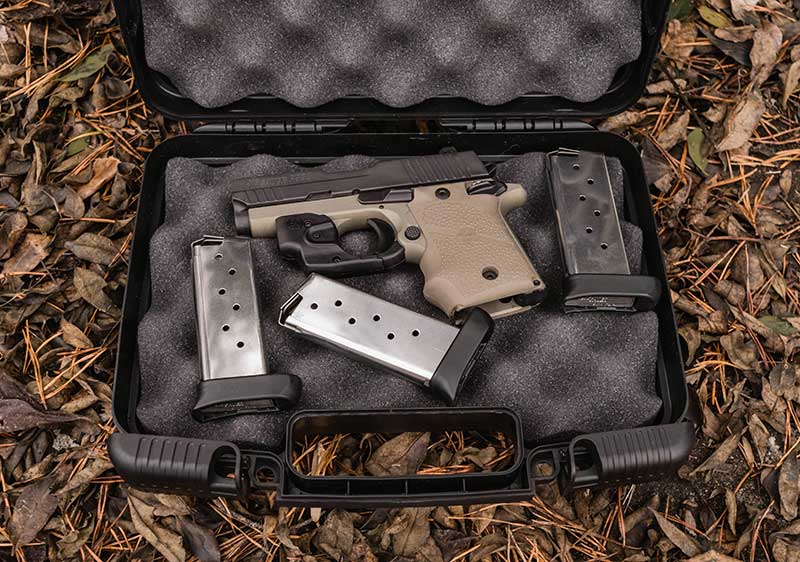 In comparison to the Sig P238, the P238 is a smoother shooter by far but that’s like comparing apples and oranges. The small frame of the P238 paired with the .380 ACP cartridge is, of course, going to feel better to shoot than the similar framed P938 with a bigger bullet; but where this gun excels is in that 9mm chambering. For those specifically searching for a 9mm round in a super-compact gun, the P938 is a winner.

With a bevy of models to choose, the Sig P938 makes for a decent backup or deep concealment gun. The Sig P938 is priced around $700 but street prices and, even better, used prices tend to hover below that. Also, don’t forget the benefit of going used is the gun often comes with extras like spare mags and a nice, hard-sided case.

Don’t forget to check out Guns.com’s full inventory of new and used guns.