Moore, a prolific inventor with dozens of patents, first cooked up the idea of the beefy handgun that went on to carry his name while working for Swedish military contractor Carl Gustav in the early 1970s. While the Swedes took a pass on the idea, Moore would patent his concept in 1976. 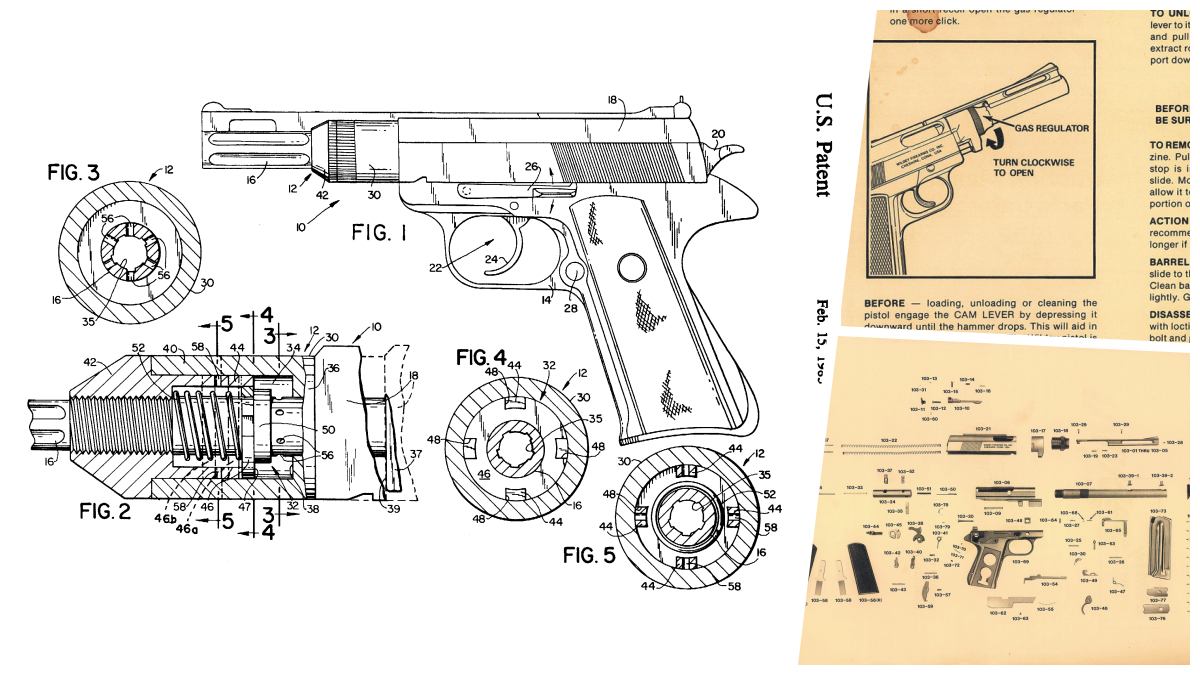 Boom. The Wildey used a barrel extension with an adjustable gas regulator and piston as well as two recoil springs and a rotary bolt to operate.

The pistol bled off powder gases from the barrel via a series of ports, which drove an operating piston to cycle the slide. If you tuned the gas regulator all the way closed, the Wildey would revert to being a manually-operated pistol that the user had to rack manually. The benefit of the design was that the action helped tame the recoil of the .45 Win Mag to reportedly less than that of a .357 Magnum-chambered revolver.

With prototype piston guns in hand, Moore, who went on to work for Winchester at the same time the powerful .45 Win Mag and 9mm Win Mag handgun rounds debuted, struggled through the early 1980s to get his gun to the market.

Finally, under the banner of the Wildey Firearms Company of Cheshire, Connecticut, Moore promised the new gas-operated pistol, chambered for Winchester’s magnum rimless cartridges, in 1980 for $389, which adjusts to about $1,200 today. However, one thing led to another and the price of the production Wildey pistol in 1984, once it actually neared the market, was closer to $1,200 in Reagan -era dollars, or about $3K today.

Needless to say, the gun, pitched for use in IHMSA silhouette shooting and as a tool for serious big game handgun hunters, was not wildly popular (see what we did there?).

Then, a Hollywood miracle happened.

In November 1985, the Wildey was featured in the Charles Bronson retribution film Death Wish 3. A Cannon Film production that was pretty over the top even for its day, the big .45 Win Mag stole the show. The theatrical trailer for the action flick even showed a detail of adjusting the gas regulator on-screen.

The film, in an era long before social media influencers, sparked a serious interest in the gun outside of the small pool of long-range silhouette shooters and the Wildey surged in popularity.

For the next 25 years, the company continued under Moore, morphing through a series of minor name changes, and produced the now-iconic blaster in a host of Wildey Magnum calibers (.41WM, .44WM, 45WM and .475WM) in addition to 9mm Win Mag, .44 Auto Mag and .45 Win Mag. Likewise, the barrel lengths ranged from super shorty 5-inch models to as long as 18-inches. 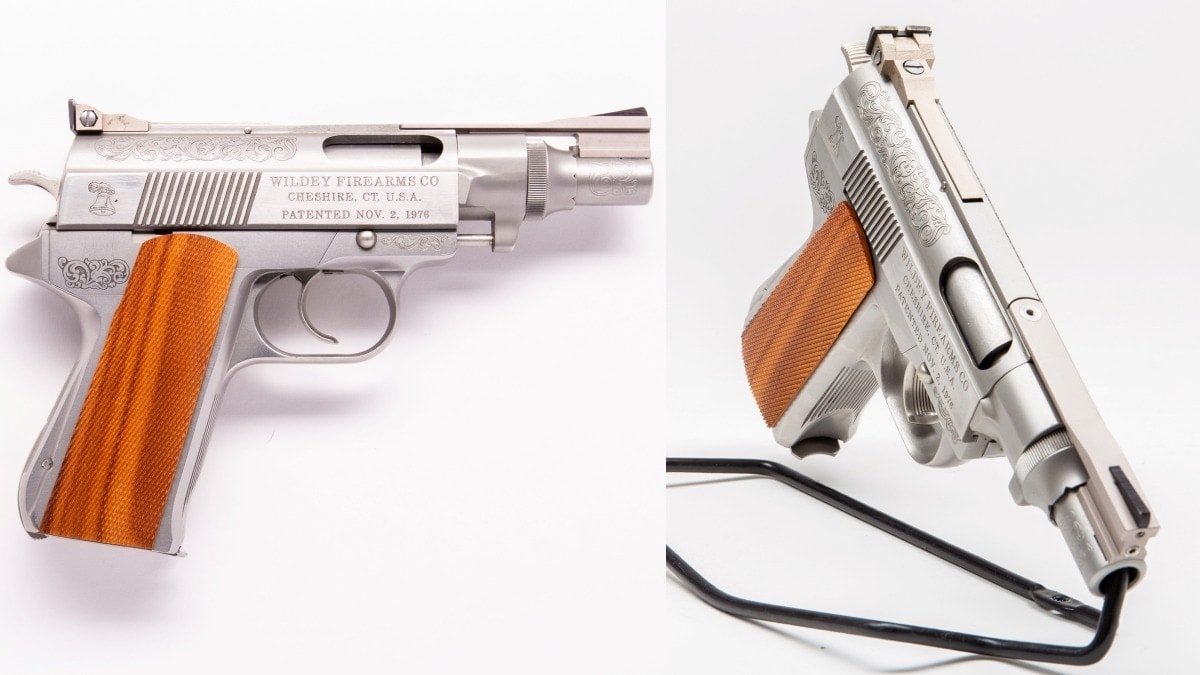 FILL YOUR HANDS WITH A WILDLEY 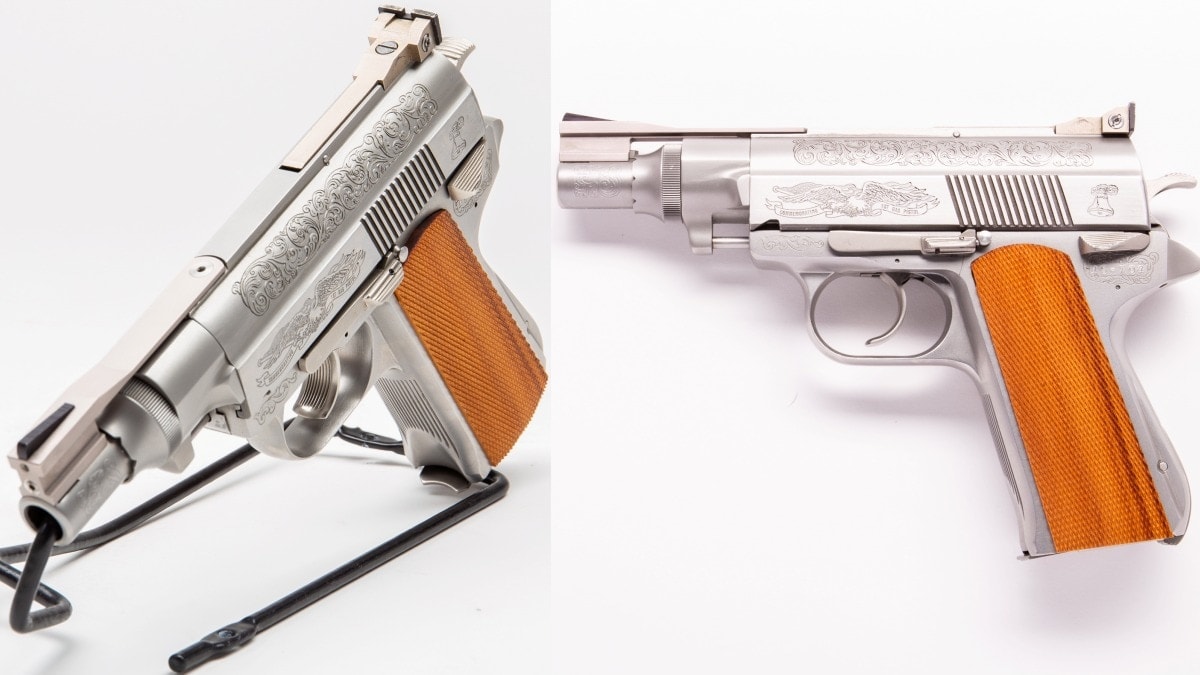 A favorite with IHMSA competitors, serious big-game hunters, and Charles Bronson fans, this pristine factory engraved example is one of fewer than 2,500 guns made by Wildey Firearms in Cheshire, Connecticut and carries the serial number 45-794. 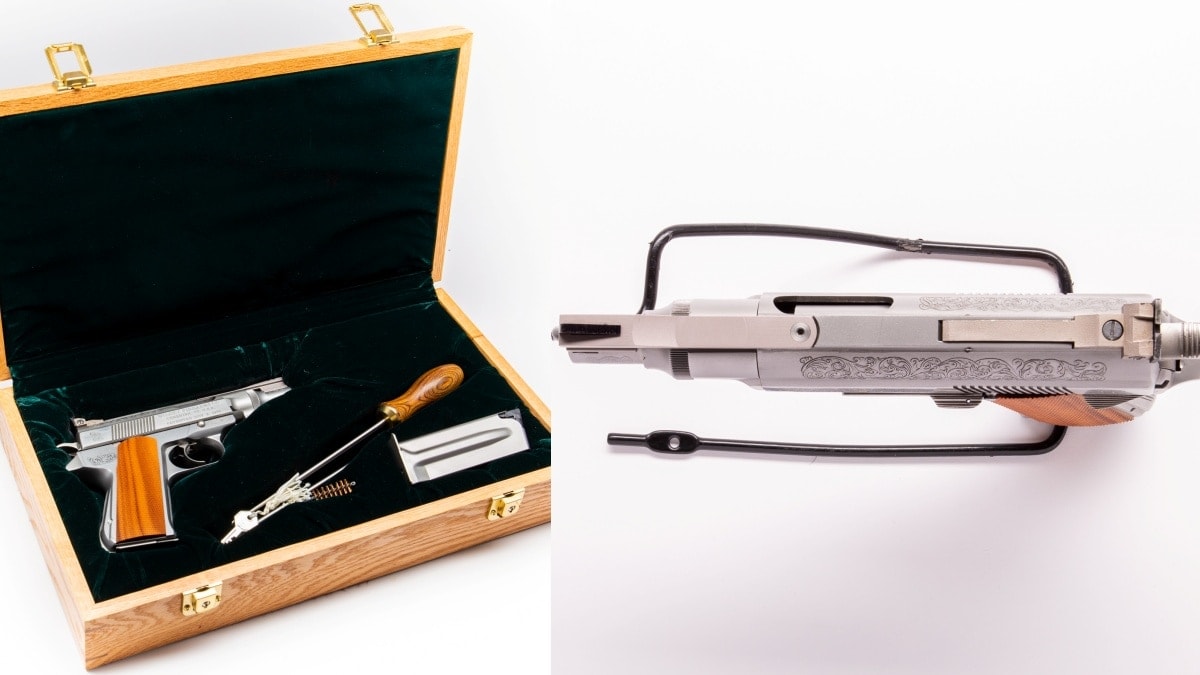 The gun has a rarely-seen 5-inch barrel, which was only offered on .45 Win Mag models and comes complete with a fitted wood presentation box with velvet lining and tools as well as a factory test card that dates to 2005. It includes an extra magazine.

However, the complexity of the giant gas gun meant that it was never produced in great quantities, with less than a few thousand ever made. The likelihood of a Wildey owner running into another such member of the same tribe in the wild is rare.

Still, if you are looking for a handgun that out-Deagled the Desert Eagle, it is hard to go wrong with a Wildey of any breed.

FILL YOUR HANDS WITH A WILDLEY

If you like interesting and often rare guns like the Wildey, be sure to check out our Collector’s Corner or look through our entire catalog of more than 3,000 new and used guns of all sorts.