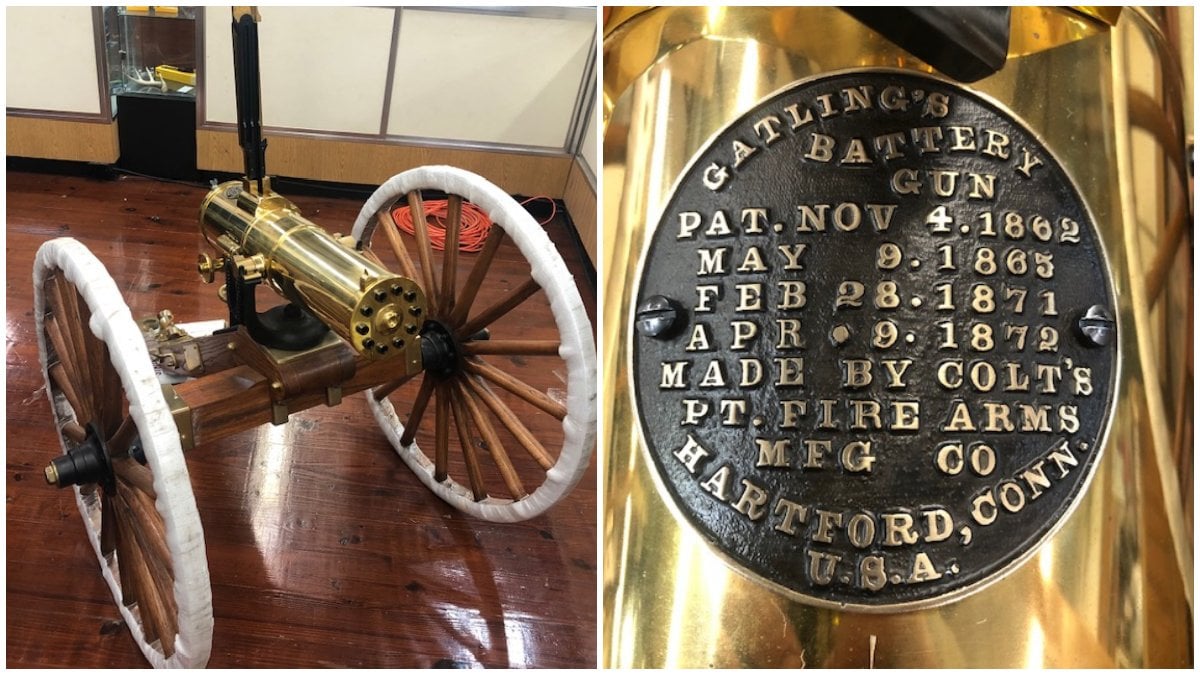 This superb 1877 Colt Bulldog Gatling gun reissue, currently available in the Guns.com Outlet program, is looking for a forever home and is ready to run .45-70 as fast as you can turn a crank.

Introduced in 1877, Colt’s Bulldog series Gatling Gun, capable of going more than 1,000 rounds per minute cyclic, was king of the battlefield.

Although Dr. Richard Gatling’s early hand-cranked “battery guns” had been introduced as far back as 1862, for the first 15 years of their existence they were bulky and used a series of unshielded barrels to produce their fire. Round were fed loosely into a hopper and the weapon could produce a (theoretical) rate of fire of about 600 rounds per minute, although it was hard to achieve.

Early Gatling guns, such as this .58-caliber RF 1862 model, with a half-dozen 33-inch barrels, had a rate of fire of 600 rpm, an overall length of 64-inches and a weight, with carriage and limber, of about 630 pounds, unloaded. (Photo: Springfield Armory National Historic Site)

By 1866, Colt took over making Dr. Gatling’s guns and won the first large U.S. Army contract for the devices, one they were eager to keep by introducing upgraded generations. By 1874, the caliber had switched to .45-70 Government and short-barreled “Camel” guns were being produced, which were much more maneuverable.

In 1877, Colt introduced a new model that enclosed not only the barrels but also the breech section in a bronze housing covered by a front plate through which the muzzles protruded. 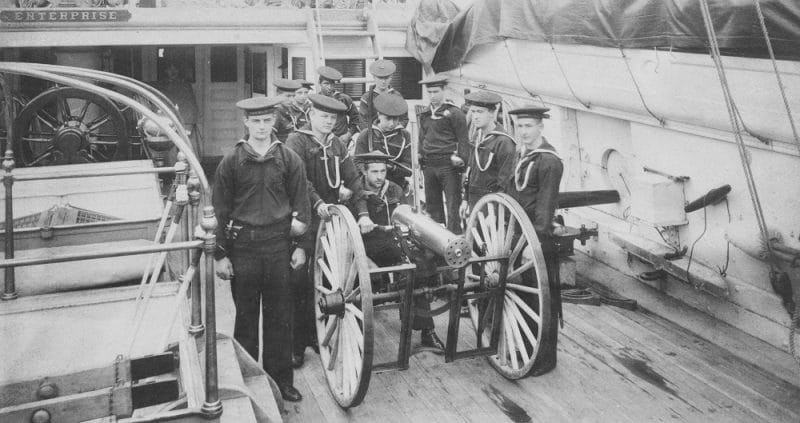 Further, the crank could be rotated to a more ergonomic rear position and, through use of a 40-round Bruce vertical feed mechanism which could be topped off, the rate of fire really jumped to well over 1,000 rounds per minute as the gun in a 10-barreled format, fired 10 rounds with each turn of the crank. Best yet, the smaller 5-barreled gun, when used on a tripod, only weighed 90-pounds.

In an Army test of a prototype gun, one of the Bulldogs fired 1,000 rounds in 79 seconds– which is amazing even by today’s standards– and scored 996 hits on target at a range of 500 yards. Uncle Sam bought 17 Bulldogs for the Army as well as others for the Navy and the model proved popular in overseas sales as well.

While more modern autoloading machine guns replaced Gatlings in U.S. service, some were still seeing combat in China and the Philippines in the early 1900s and they were only fully retired after 1914. Today, period Gatlings of any type are hard to come by and old Bulldogs are exceedingly rare, with the Springfield Armory National Historic site only having two in their collection. A five-barreled former U.S. Army model came up for auction last year and sold for $316,250.

U.S. Armament Corp of Ephrata, Pennsylvania has made a precious few brass-encased Bulldog reproductions in conjunction with Colt since 2009. 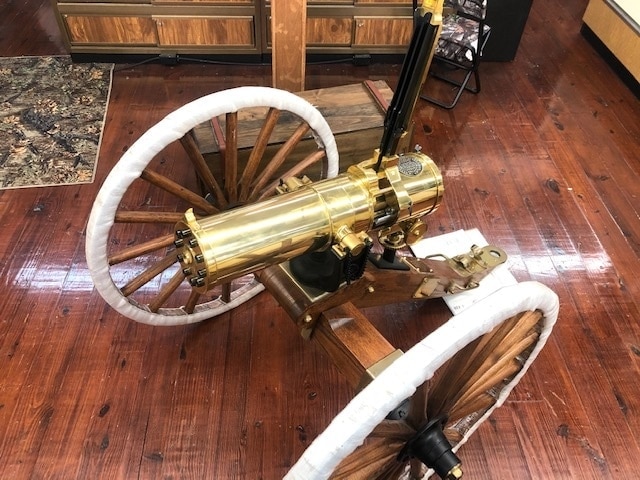 As the example we have available is serial number #1, you can guess when it may have been crafted.

It is thought that less than 50 of these rebooted Bulldogs are in circulation, in both wheeled and tripod-mounted versions and with either 5- or 10-barrels. 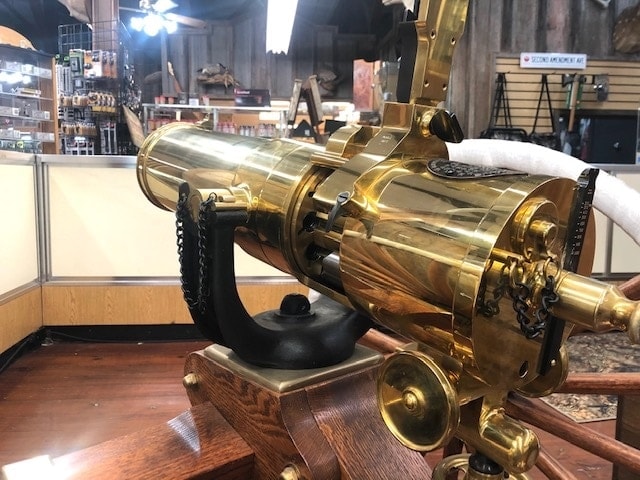 These guns are fully operational and built from the original Gatling drawings and specifications with modern techniques and quality control. They include a Bruce gravity feed device.

The 5-barrel models weigh 135-pounds while the 10-barrel examples tip the scales at a more beefy 170-pounds. The two-wheeled carriage weighs another 150-pounds. On both models, the barrel length is 18.25-inches, with a 1-in-22-inch twist.

Chambered in .45-70 Government, the 5-barreled model has an 800 rpm rate of fire while the 10 has a 1200 rpm rate. As it is hand-cranked, it does not fall under NFA restrictions and can be bought and sold without a tax stamp, although some recent state laws may apply. 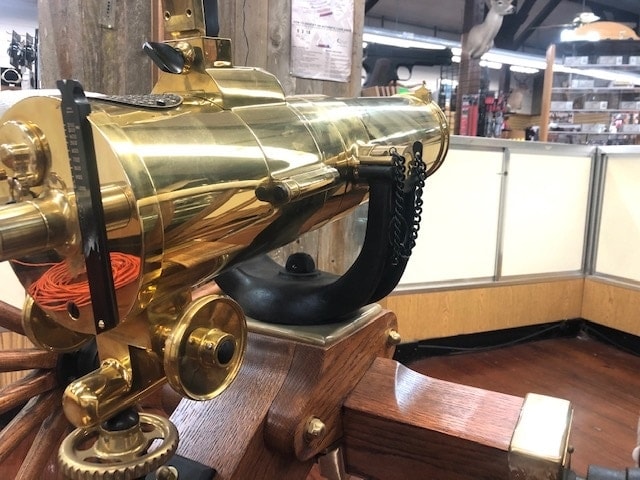 The overall length is 34-inches and the gun includes a V-notched rear sight, graduated to 1,000 yards

USAC has made other reissues for Colt, such as a very nice version of the M1903 .380 Pocket Hammerless and the Colt Classic Vietnam XM177 salute which was issued last year. But that’s a story for a different article.