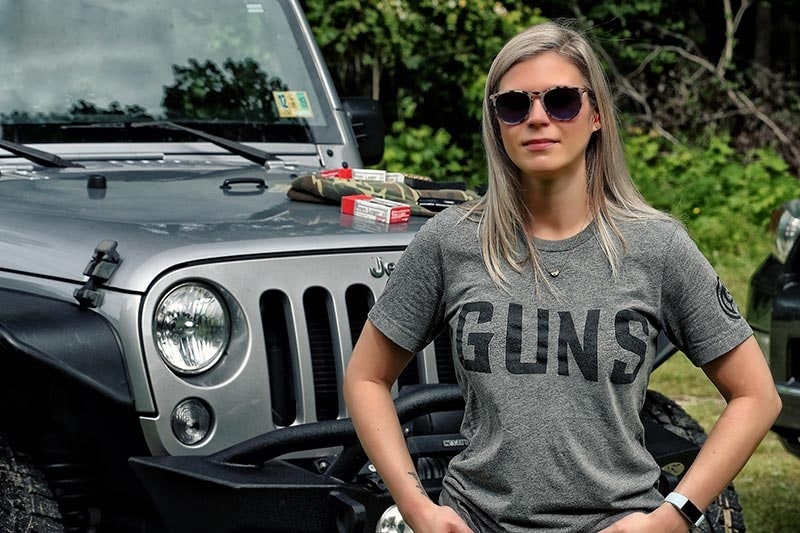 My first stop was to sit down and chat with Abbey Clary — the Social Media Manager behind Guns.com’s Twitter, Instagram and Facebook pages. Joining the company almost two years ago, she carefully curates what you see on our various social platforms. Clary chatted with me about her job at Guns.com and what caused her to make the jump from a big marketing agency to a startup company in the gun industry.

Guns.com: What prompted you to join Guns.com?

Clary: I had been in marketing at a big agency prior to this for about almost four years but, honestly, was feeling a little burned out. I had worked for smaller companies in the past and I really like the culture of startups. I heard about the job at Guns.com, so I applied.

Guns.com: I’m sure that working for a big agency is very different than a startup, so give the readers an idea of what you do day-to-day as Guns.com’s Social Media Manager?

Clary: My main job is to manage the social accounts — Facebook, Twitter, and Instagram. I post news from Guns.com and some additional content we get from either the Guns.com content team or shooters and other people in the industry. I also handle our manufacturer relationships, essentially, just trying to maintain positive relationships with them and working together on different marketing opportunities including all of the giveaways we do at Guns.com each month.

Finally, I should also mention that I manage our Brand Ambassadors and Influencers as well as keeping up with the Guns.com Gear Store.

Clary is at the helm of Guns.com’s Instagram, among other social media platforms. (Graphic: Jacki Billings/Guns.com)

Guns.com: That sounds like a lot of fun but I’m sure some challenges come with the job. What would you say is the biggest obstacle you face?

Clary: Probably the most challenging aspect is keeping our social media new and fresh across all our pages.

Guns.com: Alternatively, what is the most rewarding part of the job for you?

Clary: I would say the people I’ve met in the industry are honestly the most rewarding part. It’s funny to build relationships online or over the phone with people then you finally meet them face-to-face and it feels like you’ve known them for a long time. It’s the cool thing about social media.

Guns.com: Totally agree. The people in this industry are the best! So still on the topic of your experiences at Gun.com, historically we have been a website that promoted women in the industry. There’s a lot of girl power backing the site. What does it mean to you to work for a company that is so supportive of women?

Clary: It’s super important, I think for me personally. Women have such an important role in our industry. It’s really encouraging to see other women who are gun owners and actually shooters and know what they’re talking about.

Guns.com has a small but growing group of females here which is really encouraging as a fairly new female shooter. All the women are really genuine people and it’s really awesome that our company has embraced women in that way. Guns.com: Absolutely. So let’s dive into a little personal history. What got you into guns and how long have you been a gun owner?

Clary: I grew up around guns. My brothers and dad were all avid hunters. I shot some growing up but nothing too serious. I started working here at Guns.com and it reignited my interest in guns. I bought my first gun through Guns.com and now I have a few guns that I bought from here. It’s hard to look at the site every single day and not buy something.

I still consider myself a beginner, but I love learning.

Guns.com: I definitely agree about buying from Guns.com. I am always drooling over guns we have and keeping a little wishlist of items I want to eventually buy. You mentioned you’ve bought a few guns from Guns.com. What’s your favorite purchase?

Guns.com: I figured you were going to say that. It’s a nice one. We’re going to wrap this up but first, I have a few rapid-fire questions. First gun you ever fired?

Clary: I don’t remember what it was but it was one of my dad’s rifles.