6 Enduring Handguns You Can Count on When the SHTF 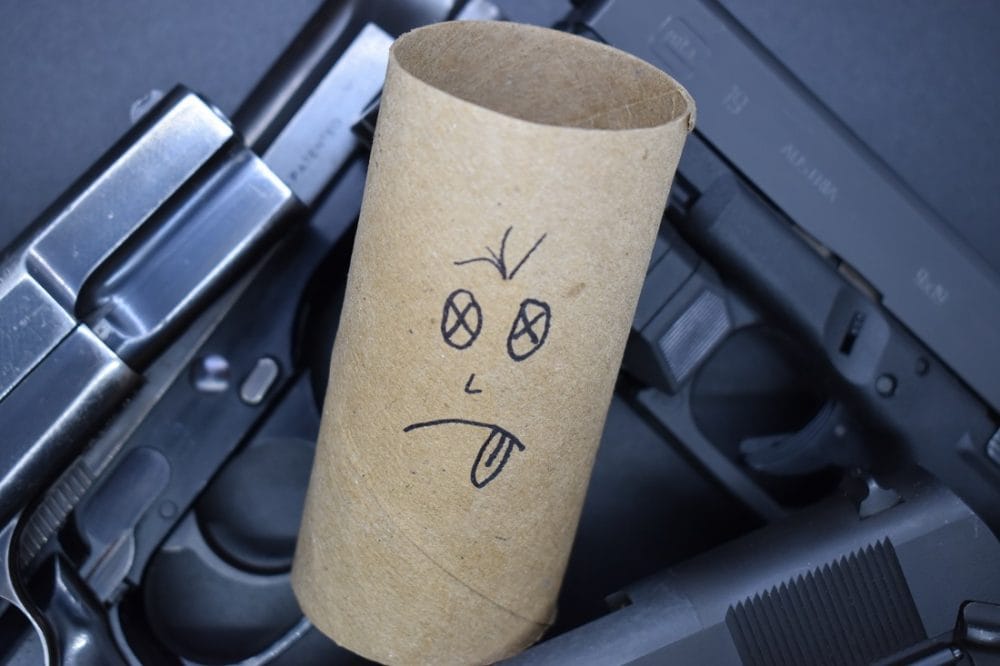 When the going gets tough… (Photos: Chris Eger/Guns.com)

For your consideration, we compiled a list of five successful handgun platforms that could help you survive a long-term crisis.

While your best and most effective bet in truly hairy self-defense scenarios (barring something laser-guided or belt-fed) is a rifle– preferably a few different ones in a range of calibers– in a pinch a handgun is better than verbal judo, a pointy stick or the lid off a can of sardines.

With that in mind, our list is centered on pistols and revolvers that are 1) modern, 2) accept common ammunition, 3) have readily available spare parts, 4) proven, 5) simple to manipulate and 6) easy to maintain.

Sure, each of these has their haters, but most importantly each type has a huge crowd of fans and users that have kept them in regular production for decades. 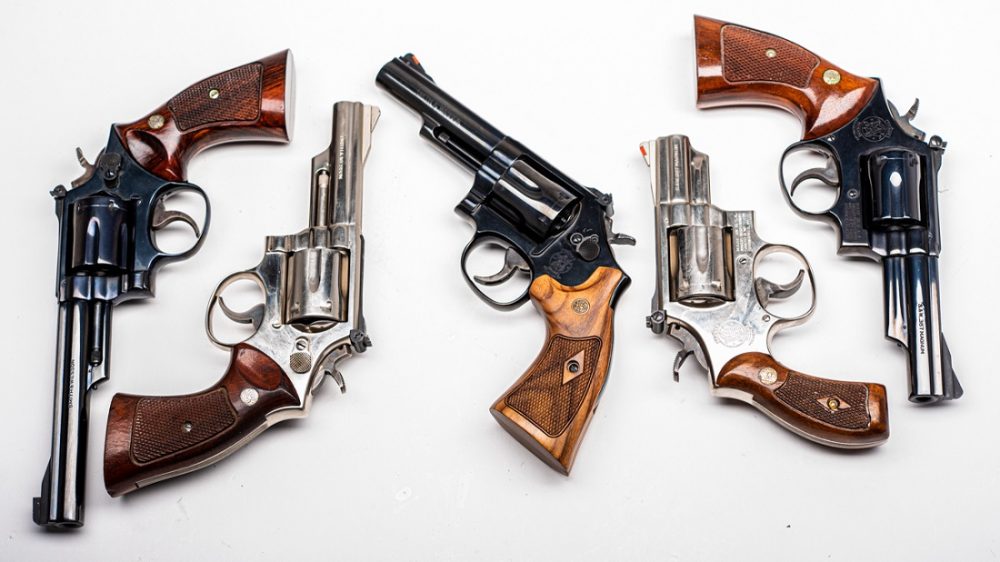 With a history that begins with the pre-Model 10 series guns– which were the original .38 Special Military & Police line– S&W has seen big success over the past 120 years or so when it comes to their medium-frame double-action revolvers. K-frame six-shooters in .357 Magnum, such as the Model 13, Model 19, Model 65 and Model 66, typically with 4-inch barrels, were a staple of home defense and law enforcement for about half of the 20th Century. That means tens of thousands of these guns are in circulation in used and in Big Blue’s “Classics” series of new revolvers.

Grips, spare parts, speedloaders (HKS 10-A fits almost all K-frames) and holsters are abundant. A snap to use and clean, these wheel guns are, in a very real sense, timeless. For those who want to go smaller, 2.5- and 3-inch barrel round-butt K-frames are more concealable. 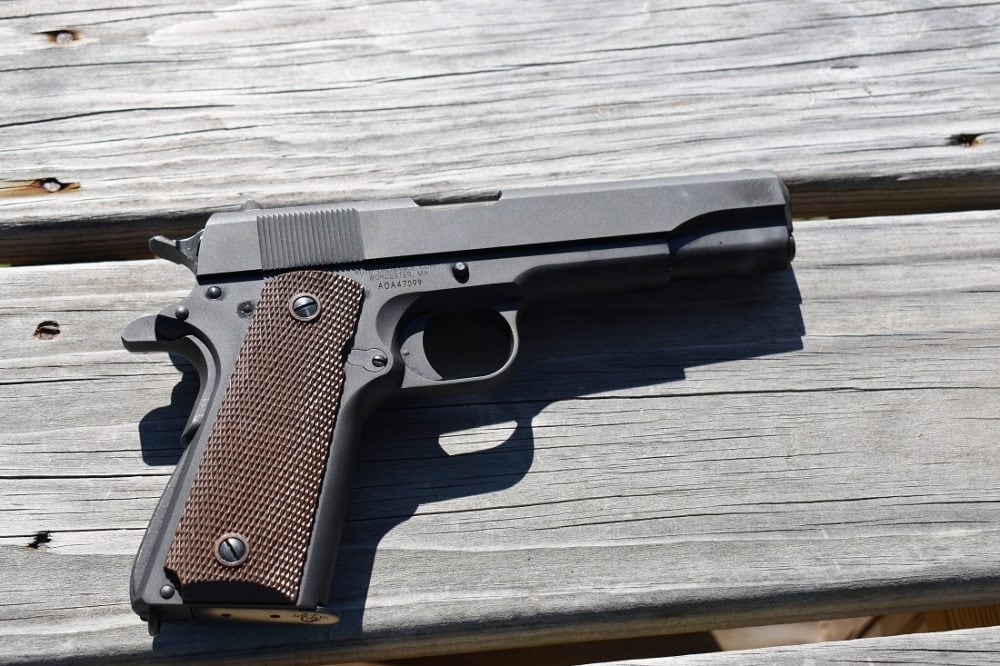 Two World Wars, or something like that. (Photo: Chris Eger/Guns.com)

Using lessons learned during service in the Great War, the 1920s update to John Browning’s M1911 has gone on to become the everlasting people’s champ when it comes to full-sized semi-auto handguns. Although when compared to more modern designs, the all-steel single-acton single-stack can seem kind of dated, a version of the M1911A1 is currently produced by just about every big-name gun maker ranging from Colt and Smith & Wesson to Remington, Sig Sauer, and Ruger.

Magnify this by the dozens of manufacturers who formerly cranked out the guns by the truckload for both Uncle Sam and the commercial market, then add more or less dedicated 1911 mills such as Auto-Ordnance and Kimber to the mix, the pistol is perhaps the most widely available .45ACP on earth– although lots of M1911s are around in 9mm, 10mm and .38 Super.

You can bet that it will be generations before the platform falls out of factory production. 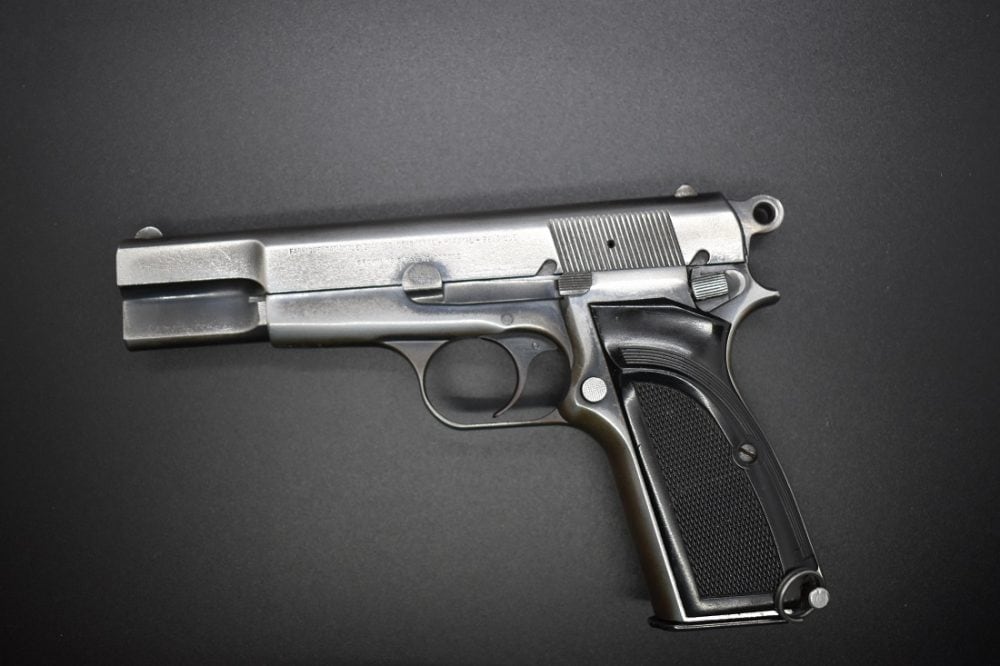 The Browning Hi-Power is a work of functional beauty. This Israeli-contract FN T-series BHP  is 50+ years old and “in the white” but, with new springs and some Ballistol, it still runs like a champ. (Photo: Chris Eger/Guns.com)

The swan song of John Moses Browning, the inventor’s masterpiece pistol took cues from his earlier M1911 while having a simpler takedown and a double-stack 13-round 9mm magazine. First put into production in the mid-1930s, the Browning Hi-Power went on to become one of the standout pistols of World War II and was used by both sides and in all theatres.

After the war, coupled with FN’s FAL rifle, which was dubbed the “Free World’s Right Arm,” the Hi-Power was so widely adopted in military use that it was something of the “Free World’s Sidearm.” Heck, even the U.S. Army thought about adopting it in the 1950s. Recently dropped from FN’s catalog after a more than 80-year run, hundreds of thousands of BHPs are still in circulation and clones are in current production on at least two continents. 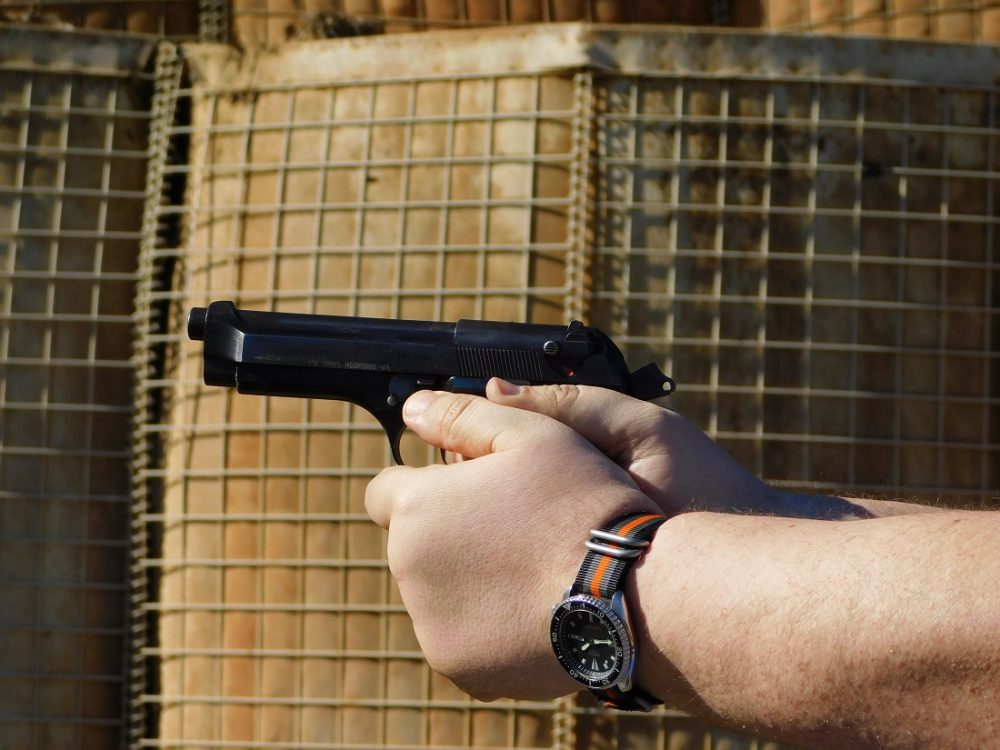 When Beretta introduced the 9mm Model 92 pistol in the mid-1970s, it followed in the wake of the Italian gun maker’s already globally-popular Model 1951, which it borrowed much from, and more than a few nods to the Walther P38. With its 15 or 17-round flush-fit double-stack magazine, the full-sized double-action pistol was revolutionary when it appeared on the market and was soon adopted as a military sidearm and police duty handgun, phasing out older single-stack pistols as well as wheel guns.

The U.S. military gave the Beretta 92 the nod after a series of contentious handgun trials in the early 1980s and the M9 is still in extensive use although it is being replaced by the more modular Sig Sauer P320. Beretta magazines, as well as aftermarket and military-surplus replacements, are readily available. Likewise, springs, internal parts, and the know-how to maintain them are in wide circulation. 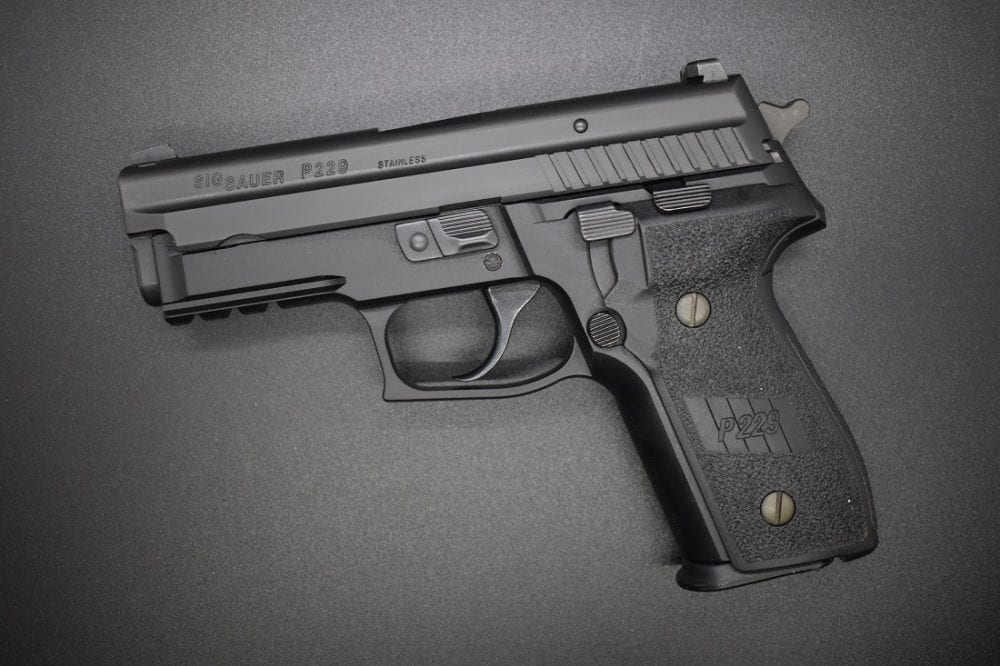 The Sig P-220-series guns, such as this P229R, have been around for over 40 years and, while not as commonly encountered as some of the other pistols in this article, are frequently encountered in the wild and are hard to kill. (Photo: Chris Eger/Guns.com)

First imported to the U.S. in the late-1970s as the Browning BDA, the double-action Sig Sauer P220 kicked off an American love affair with these alloy-framed Swiss-German pistols. The family expanded to the double-stacked P226, P228, and P229 as well as the more scaled-down P224, P225, and P227 in a host of calibers.

Adopted for use widely and popular on the commercial market, by and large, the same manual of arms and maintenance techniques apply across all models and most are still in series production by Sig. 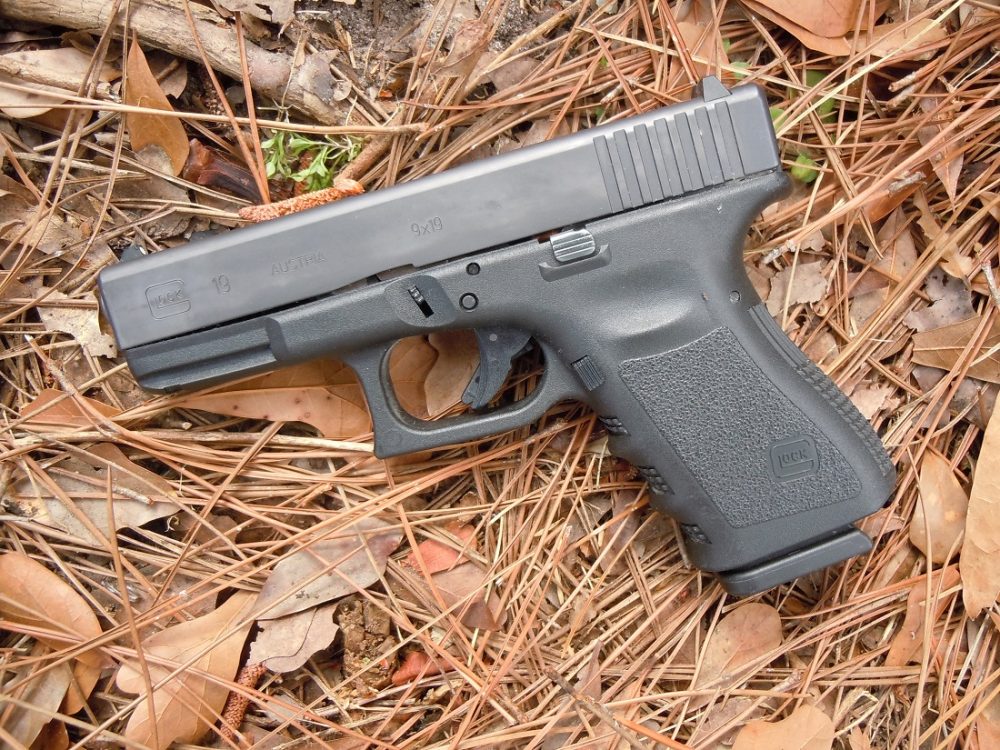 The Gen 3 Glock 19, the macaroni-and-cheese of the polymer pistol world. (Photo: Chris Eger/Guns.com)

Gaston Glock’s full-sized G17 9mm polymer-framed pistol and the slightly smaller 15+1 capacity G19, debuted on the U.S. market in 1986 and 1989, respectively and, after overcoming a snobbery against “plastic guns,” have gone on to become wildly successful. Now used by police and military forces in something like 60 countries around the world, the G17 and G19 have set the standard for a modern “combat” handgun.

When it comes to manipulation and nomenclature, despite the fact there have been five generations of Glocks, someone who has learned to field strip and maintain a 1980s 1st Generation G17 and no other gun can still pick up a brand new Gen 5 model and take care of it without skipping a beat. Finally, there are so many accessories, spare magazines, and aftermarket add-ons for these guns that you can build your own without having a single factory Glock part.

CHECK OUT GLOCKS IN STOCK