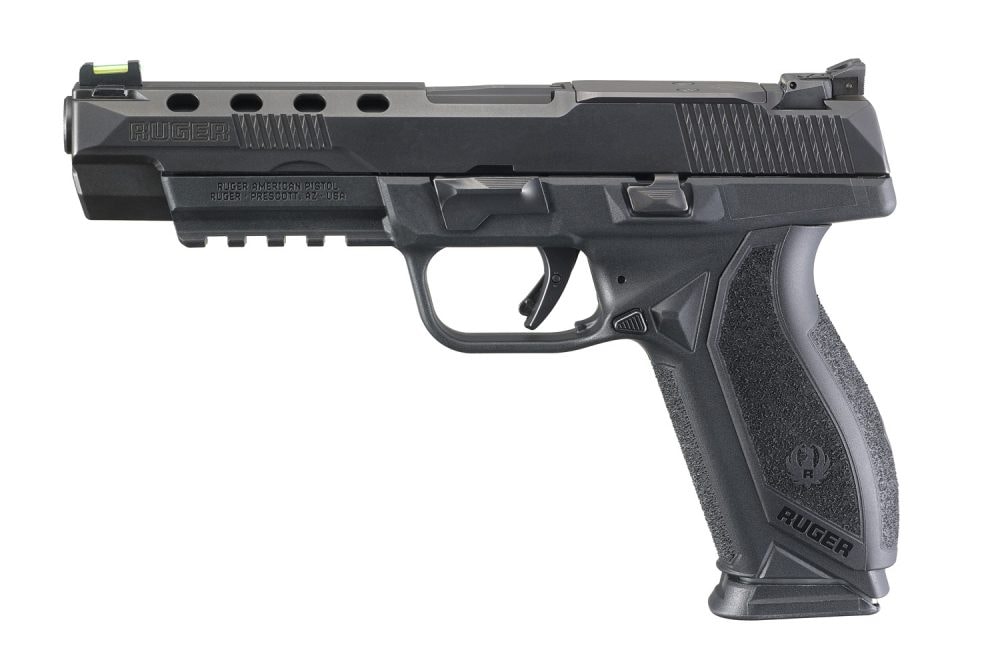 From a ported slide that is ready for direct-mounting most common reflex optics to a slow barrel twist rate, the new Ruger American Pistol Competition is feature-rich. (All Photos: Ruger)

Ruger recently announced an expansion to their American Pistol series geared to competition shooters, providing an optics-ready gun for under $600.

The 9mm Ruger American Pistol Competition features a 5-inch, stainless steel, competition barrel with a 1-in-16 twist for enhanced accuracy with lighter weight match bullets. The lengthened slide is ported and has forward cocking serrations but the big draw is the fact that it is drilled and tapped under a cover plate to allow direct mounting of a range of red dot reflex optics including Vortex, Burris, Sightmark, Docter, MeoRed, and MRDS using #6-48 mounting screws.

For those who want to stick to irons, the pistol ships standard with a fully adjustable target rear sight paired with a fiber optic front sight. 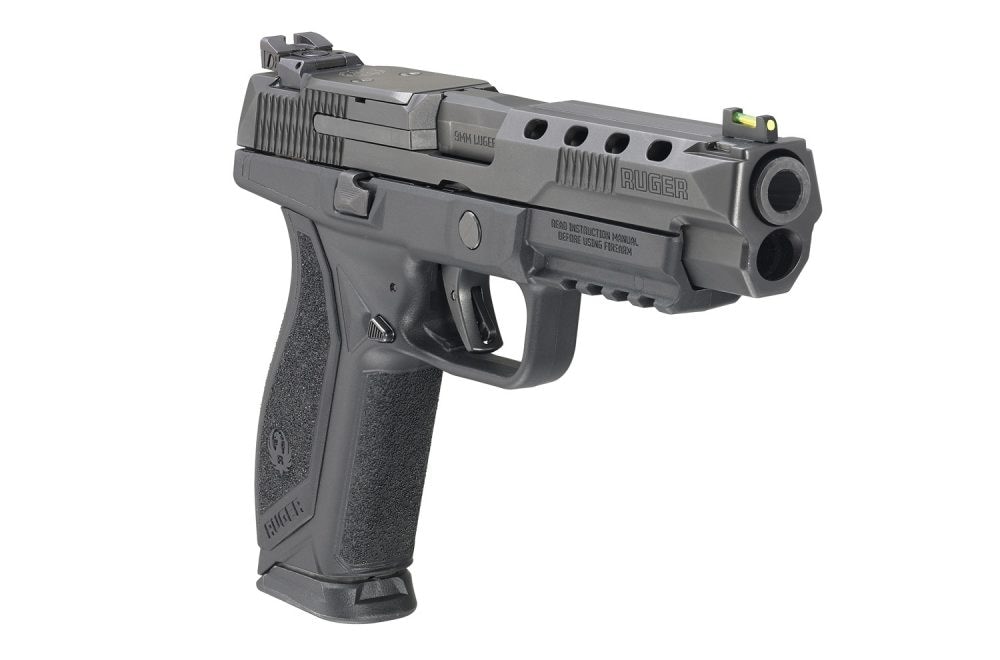 The Ruger American Pistol Competition has non-slip surfaces to include front and rear slide serrations and an aggressive, competition-textured frame and grip modules.

“Whether you shoot at a local club or at the national level, the Ruger American Pistol is built to compete and win in the Production class,” said Ruger Team Captain Doug Koenig of the new gun. “This pistol fits like a glove and is incredibly controllable for rapid follow-up shooting.” 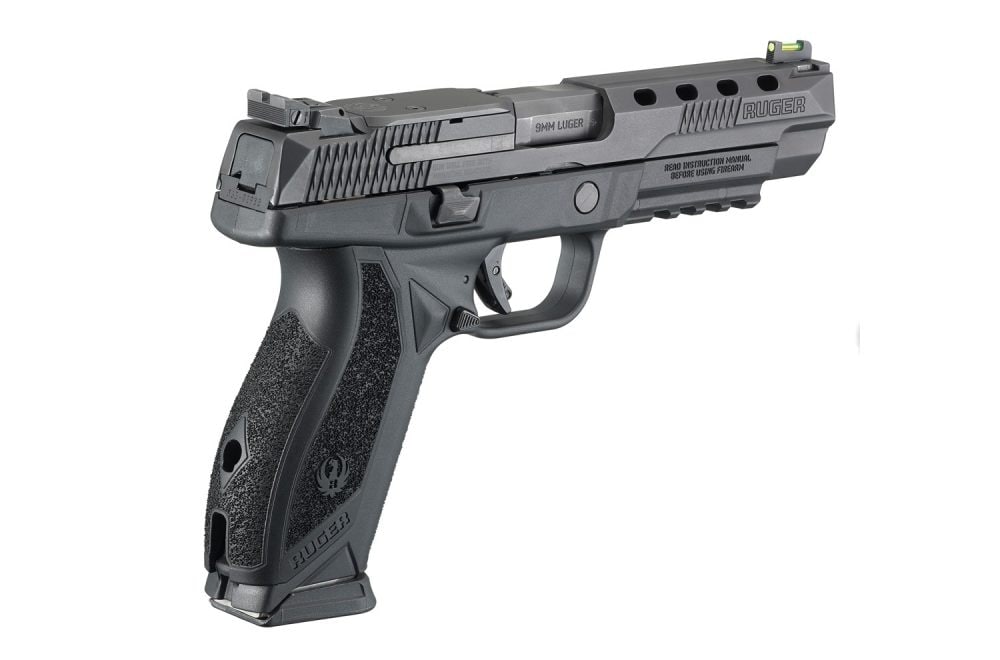 The pistol ships standard with modular wrap-around grip system for adjustment of palm swell and trigger reach to fit a wide range of hand sizes (small, medium and large included).

When it comes to specs, the Ruger American Pistol Competition is 8.3-inches long overall, 5.6-inches tall and weighs around 34 ounces, unloaded. It ships in a hard case and includes a pair of 17-round nickel-Teflon coated steel magazines for an MSRP of $579, a price point that will likely be lower at retailers. 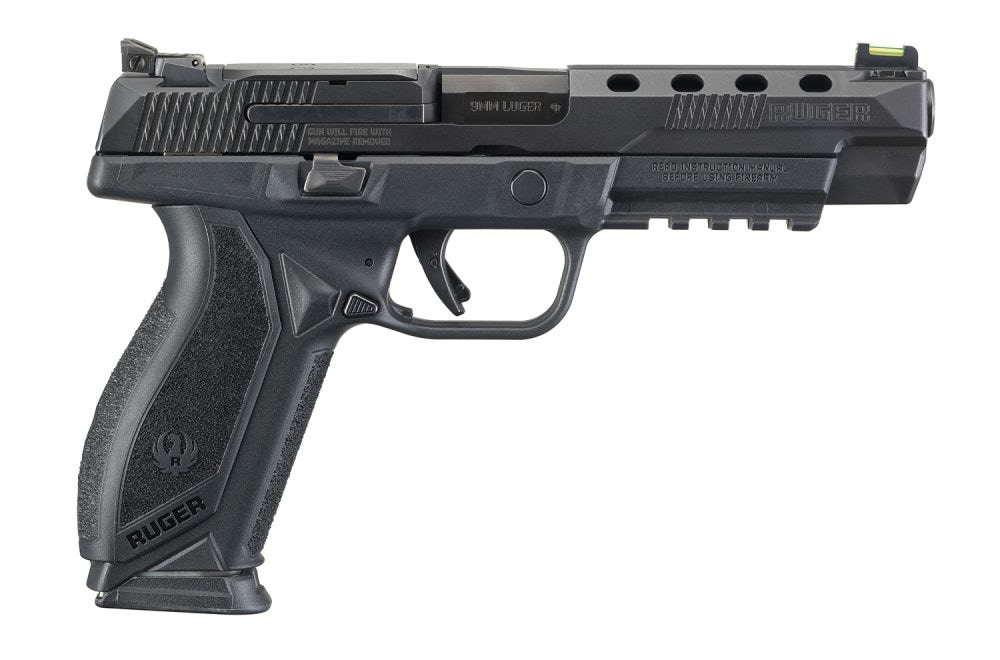 The gun, like the rest of the Ruger American series, is performance tested for sustained +P ammunition use.

Ruger first introduced the American Pistol series in 2016. Designed to exceed military standards, the platform was torture tested through 20,000 rounds of +P ammo. Since introduction, the pistol line has been expanded to include both the Duty and Compact series in addition to the new Competition model.

The Firearms Guy has been testing one of the new Competiton Rugers and has a basic overview in the below video.