VE Day at 75: Stacks of Mausers, Lugers, Walthers and More 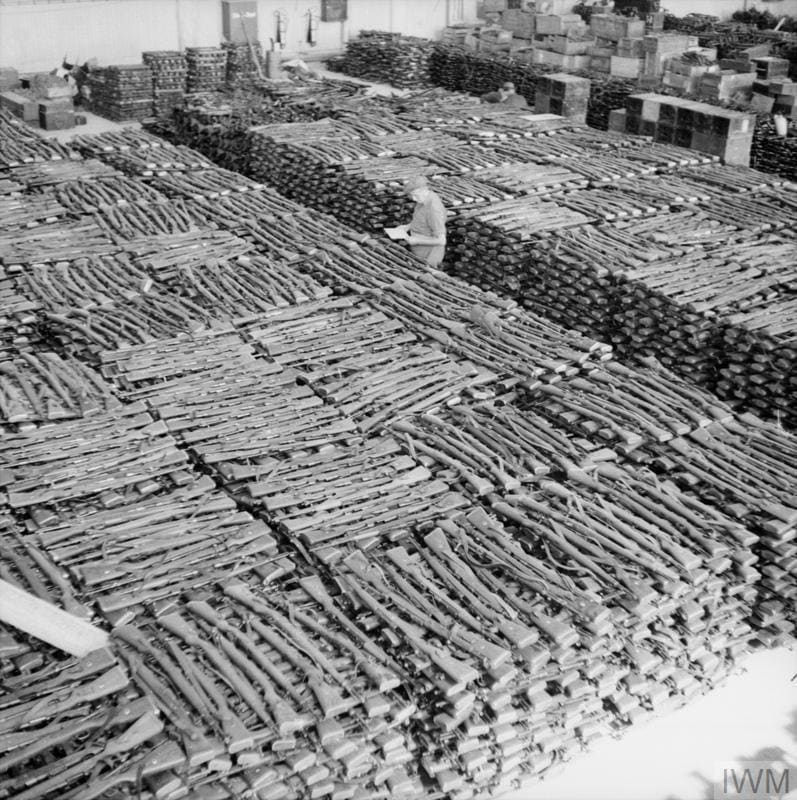 Storeroom at Solar aerodrome, Stavanger, holding some of the estimated 30,000 Mauser rifles taken from German forces in Norway after their surrender. (Photo: Imperial War Museum)

Victory in Europe Day, or simply just VE Day, saw the acceptance of the German general surrender in World War II, and the return of Freedom to half of the Continent.

Celebrated on May 8, 1945, after the fall of the Third Reich, millions of German troops still needed to be disarmed across Europe and fresh stacks of Mauser bolt action rifles, along with the first generation of intermediate cartridge assault rifles such as the StG44 and semi-auto rifles such as the G43, grew around the continent. 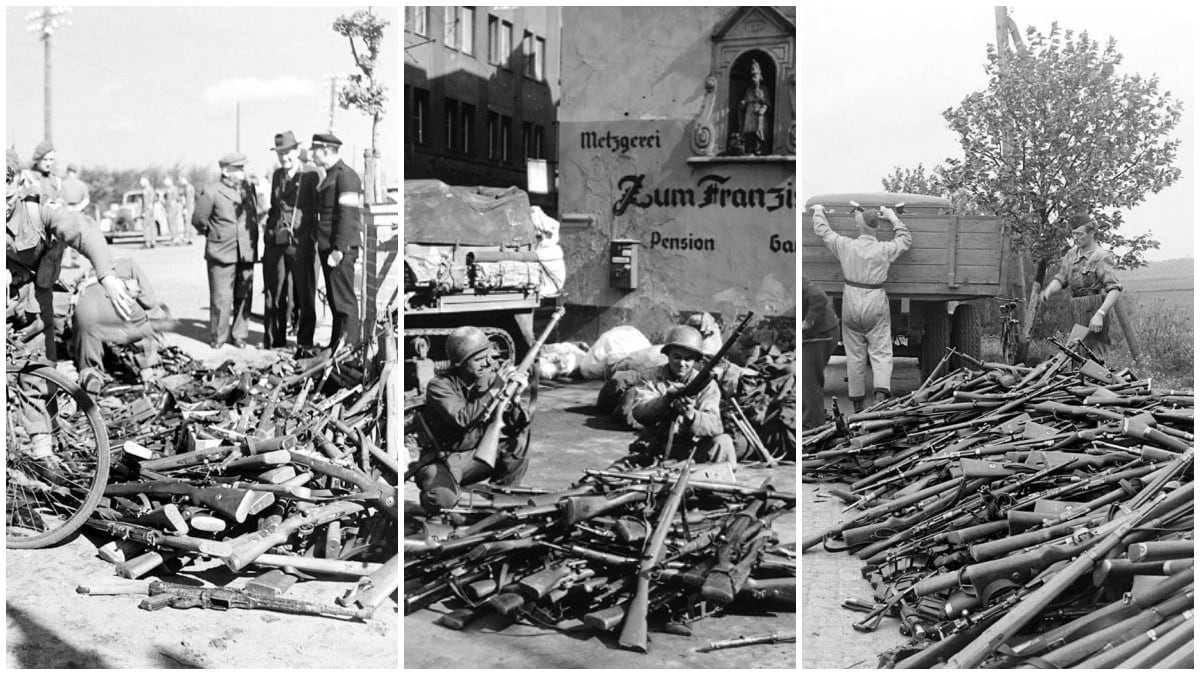 Besides their own domestically produced rifles, the Germans absorbed and used guns from countries they overran such as Danish and Norwegian Krags, French MAS rifles, and even Russian Mosins.

Added to this were piles of MG34 and MG42 general-purpose machine guns along with  MP40 submachine guns. 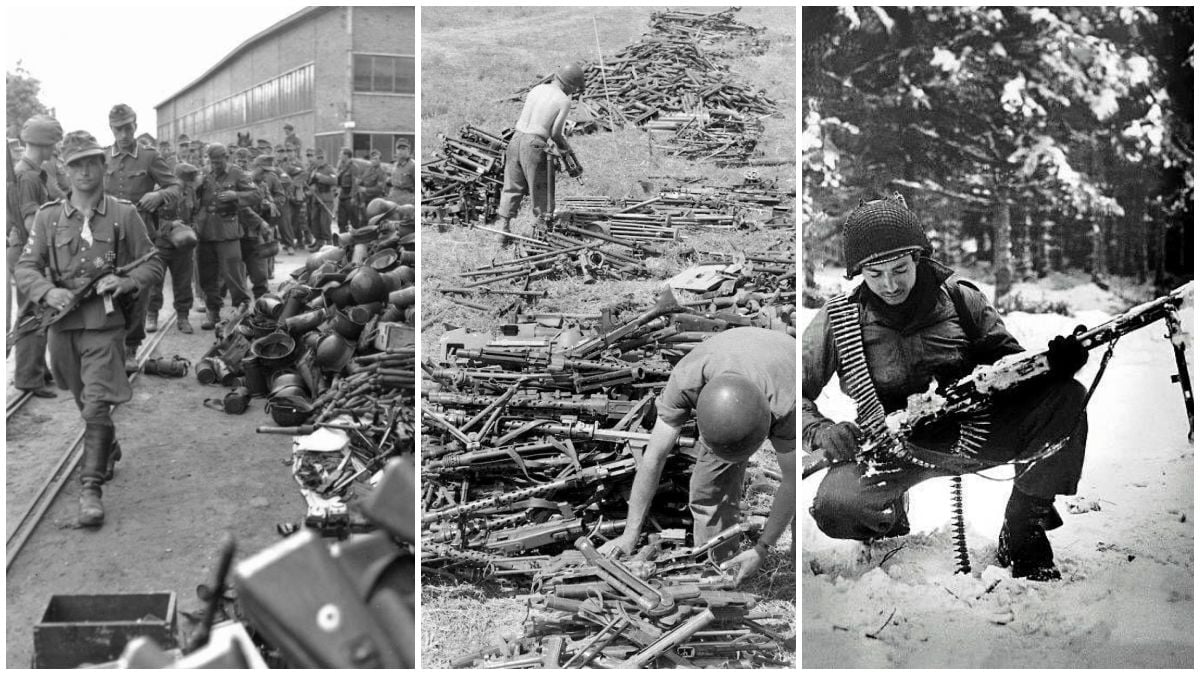 Handguns of all sorts were collected, as the Germans not only adopted foreign guns they captured and manufactured their own, but also placed large orders abroad from countries such as Spain which were ostensibly neutral in the conflict. 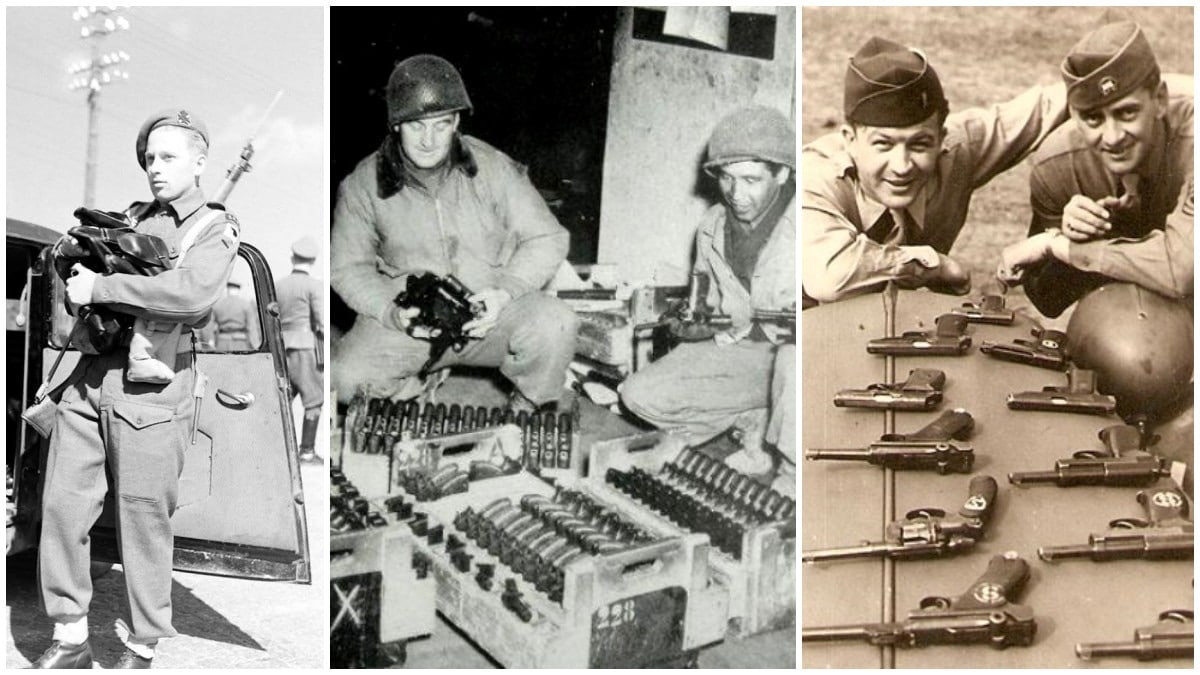 The WWII German war machine used millions of handguns with Teutonic pistols such as Lugers, Mausers, and Walthers being sought after by trophy hunters who often had to settle for Astras, FEGs, and Dreyse models instead. The occasional Reichrevolver and other wheelgun also popped up. For instance, when German Luftwaffe boss Hermann Goering was taken into custody by U.S. troops on May 6, 1945, his personal sidearm was an S&W .38. That wheel gun is currently in the West Point Museum.

This larder of instant military surplus went to a variety of uses.

Many newly-Liberated European countries, such as Yugoslavia and Norway, rapidly repurposed stacked German weaponry and re-issued it to their own armies, which had been stripped of arms during the occupation. In the instance of Norway, they re-barreled thousands of inherited Mausers 98Ks in .30-06, 6.5x55mm, 7.62 NATO and even in .22 LR, dubbing them the M59, M59F1, M67, and so forth, an action that kept these veteran guns in service as late as the 1980s for reserve and training purposes.

If the trenches of the Hoth battle scene in The Empire Strikes Back seems very, um German, it is because it was filmed on Norway’s Hardangerjøkulen glacier in the early 1980s and, as the country had several surplus StG44s readily available, they were the basis for the blasters used by local extras portraying Rebel foot soldiers.

Others went into storage for possible future use. For example, trainloads of captured German arms speeded East to Stalin’s Soviet Union, where they were typically put into arsenal storage. Then the Soviets, in the interest of expanding the greater Marxist-Leninist cooperation sphere in the early days of the Cold War, shipped out boatloads of captured German guns to overseas allies on the cheap. For instance, early Viet Cong units were just as often equipped with MP40s and Mausers as PPSh-43s and Mosins. 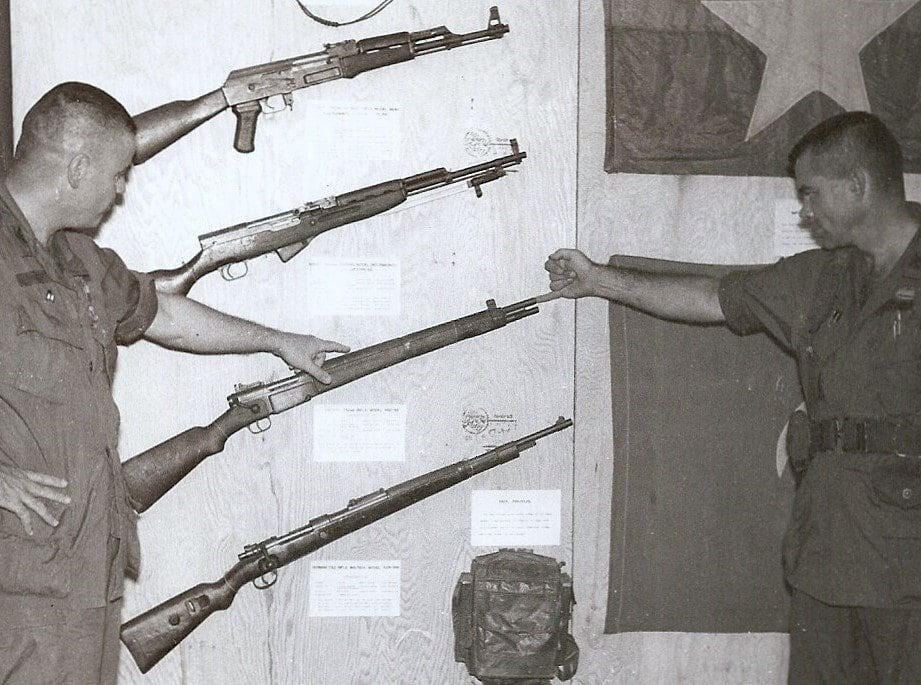 So many, in fact, that today’s Russian Ministry of Defense plans to use thousands to pave the walkways of a church built in honor of past Heroes of the Motherland.

American GIs and Commonwealth troops returning home from overseas often brought back “duffle bag” guns with some getting their guns checked and ticketed by headquarters staff and others electing not to take out such red tape. These firearms today can often be identified due to lack of official import markings, hinting the gun being a vet “bring back.”

These bring backs, once common, are now highly sought after and should be treated as museum pieces to some degree due to the history associated with them. 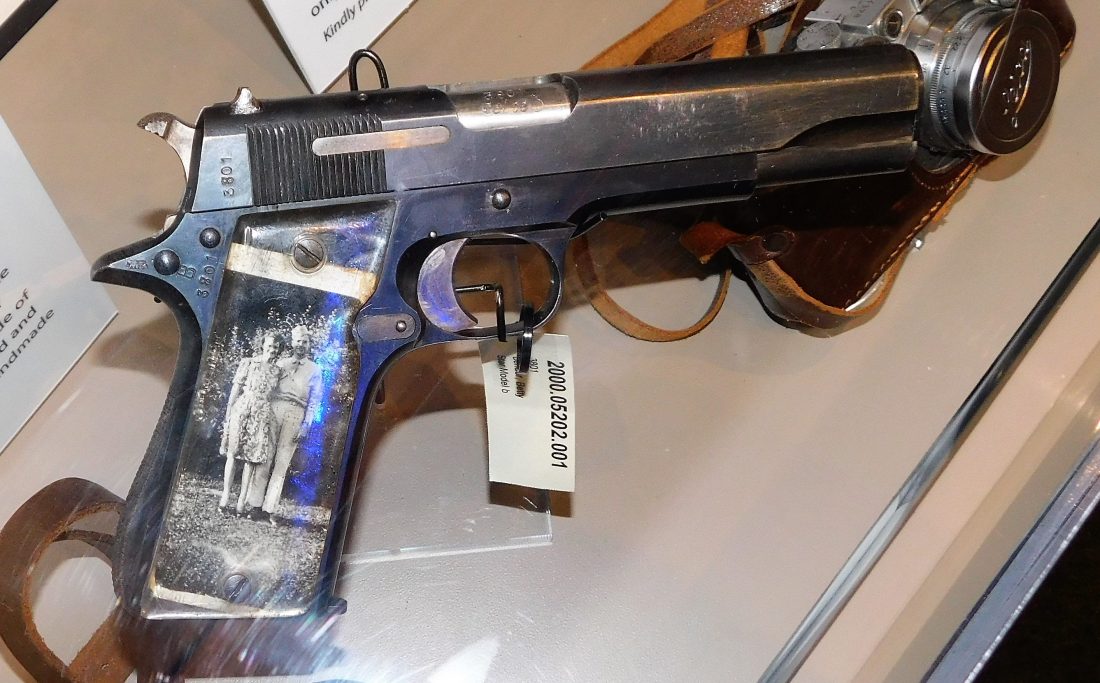 This Spanish-made Star Model B was brought back to the U.S. by a member of the 69th Infantry Division. The Germans ordered 27,000 of these guns for use by their military during WWII and, while not as sought after as a Luger, made a great war trophy. The GI who brought this one back had handmade sweetheart grips crafted for the gun from plexiglass– a material typically taken from shot-down aircraft canopies. It is now in the Camp Shelby military museum. (Photo: Chris Eger/Guns.com) 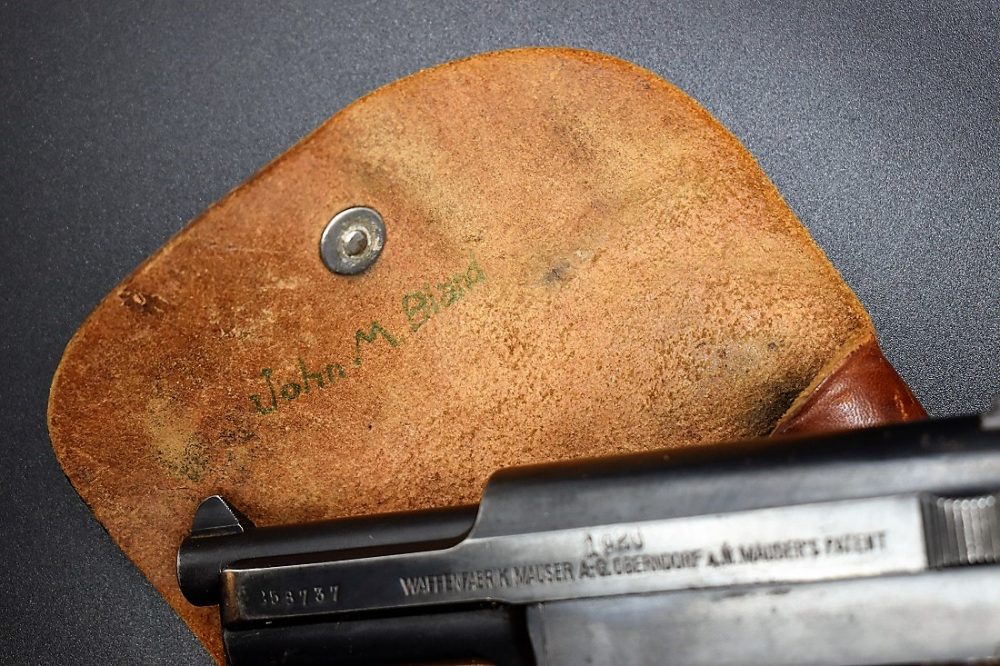 This Mauser M1914 pistol in .32ACP was made in 1920 and it, along with its leather holster, was brought back in 1945. Vets often wrote their names on captured holsters to ensure against sticky hands or, in cases where whole crates of guns were captured, simply to tell them apart. (Photo: Chris Eger/Guns.com)

The guns– brought back in the thousands by the Greatest Generation– were often sold, traded, and passed down inside families. This led to second or third lives for the antique hardware as hunting, target and home defense pieces. Period literature, TV and movies often are filled with references to these guns. 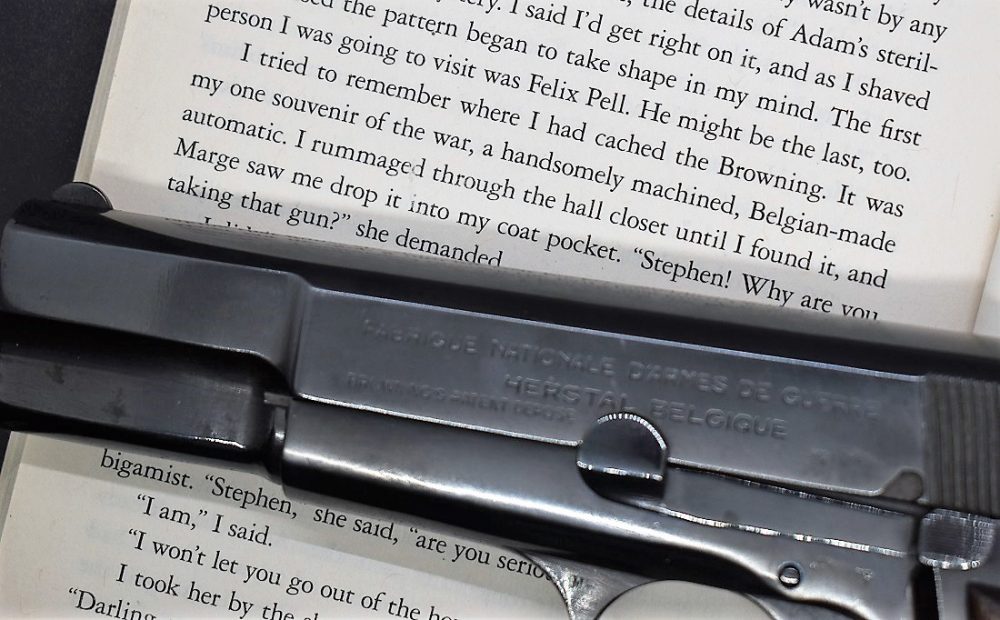 The 1946 novel, Mr. Adam, by newspaperman and war correspondent Pat Frank, includes references to a bring-back Browning. Of note, the Browning Hi-Power atop this passage was a 1944-production FN with German dirty birds that came back to the U.S. with a returning GI from Alabama in 1945. (Photo: Chris Eger/Guns.com)

The 1950 and 60s were perhaps the golden age for milsurp rifles and pistols, and with millions of Mausers, Lugers and Walthers available on the market, they were priced right

While a massive wave of surplus German guns came stateside with returning GIs in 1945, within a decade this surge became a downright flood as countries that had inherited their own supplies replaced them with more modern equipment– often U.S. provided M1 Carbines and Garands– and liquidated their old stocks on the commercial market. This led to the days of $60 Lugers, $20 Mausers, and $40 Walthers.

Today, the prices have gone but also many of the historic pieces have been greatly modified over the past 75 years. Nonetheless, their legacy as relics to the American and Allied service members who left their homes and fought to put these weapons under new management carries on. 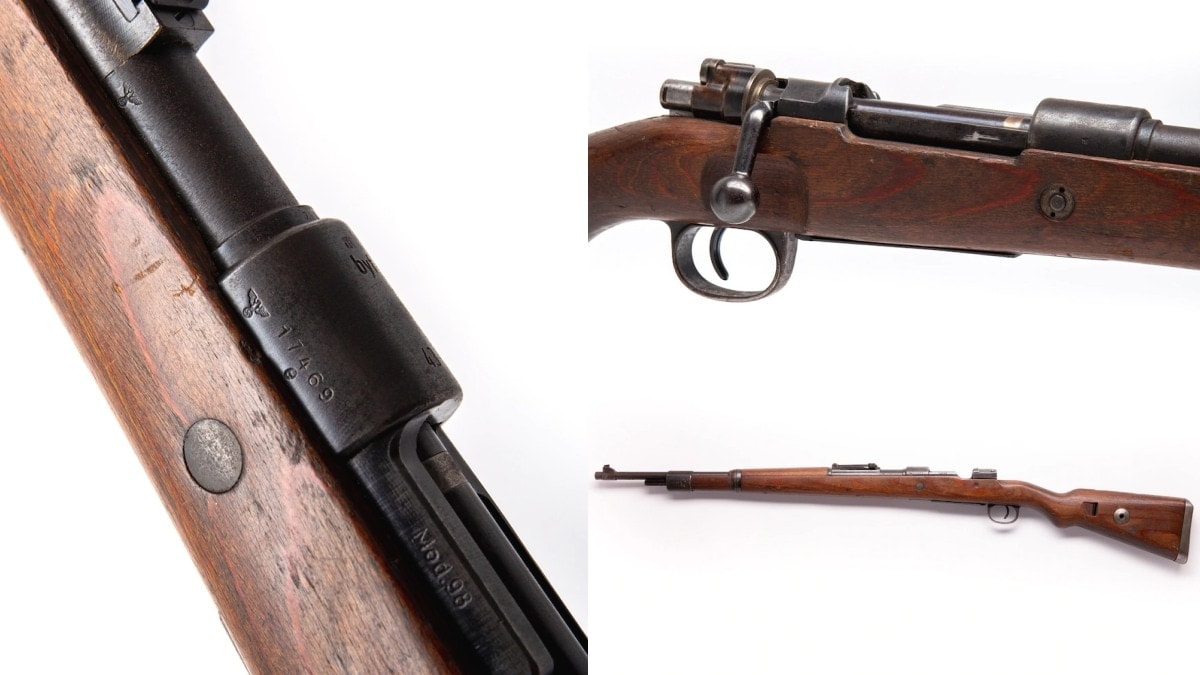 The BYF-coded 98K is an example of a wartime rifle that is still in its more or less original condition. Something increasingly hard to find

COLLECT YOUR OWN PIECE OF HISTORY

Interested in a little souvenir of WWII of your own? Check out our Collector’s Corner, where history is just a click away.