Pint-Sized Parabellum: A Look at the New FN 503 9mm Pistol 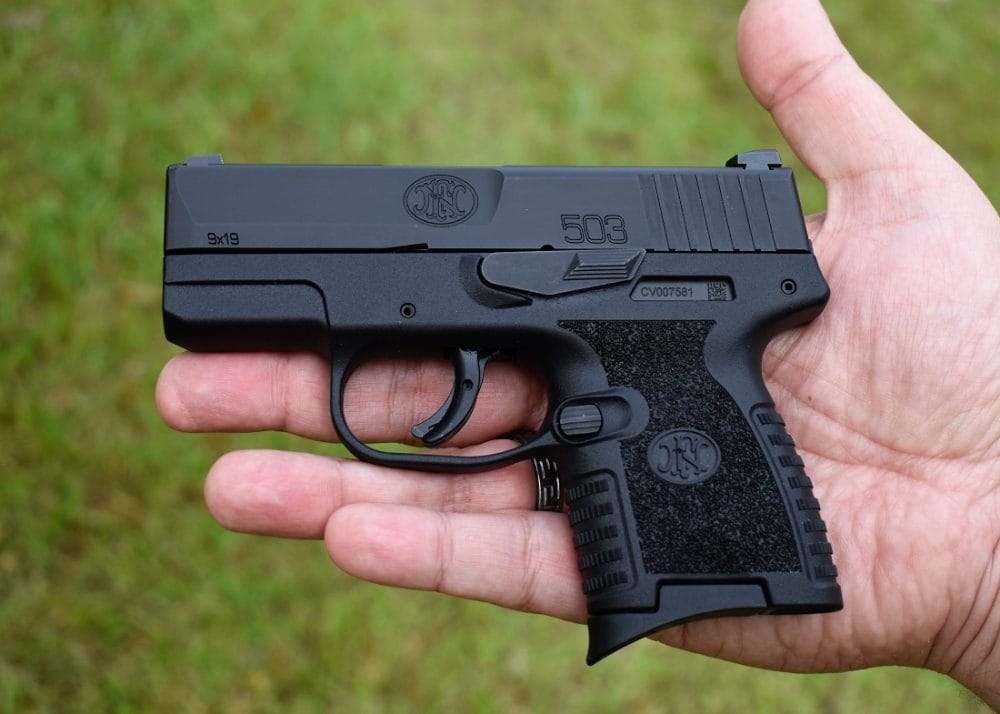 The new FN 503 pistol offers up to 8+1 rounds of 9mm and fits (almost) in the palm of your hands. (All Photos: Chris Eger/Guns.com)

Offering concealability and reliability, the new FN 503 shares the lineage of its full-sized pistol line but comes in a micro-compact format.

Introduced in March, the striker-fired 9mm borrows the design, performance, and reliability standards of the company’s popular FN 509 series folded into a pint-sized single-stack optimized for concealed carry. The resulting FN 503 is both slim and trim. Currently the company’s smallest handgun, the 503 has a smaller profile than the FN-S Compact and FN 509 Compact.

Specifically, the 3.1-inch barrel contributes to a 5.9-inch overall length. Height is 4.6-inches with the flush fit magazine while width, over the surface controls, is 1.1-inch. To put that in context with contemporaries, it is roughly the same ballpark size as the Glock G43 or Sig P365. 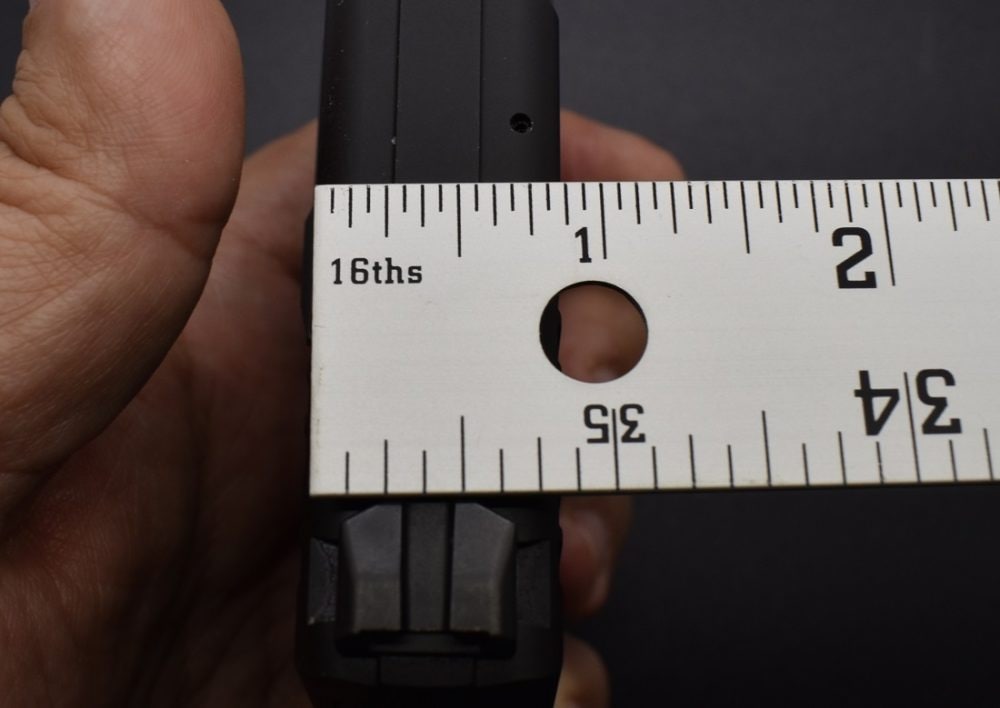 While overall width is listed as 1.1-inches, it should be noted the slide is slimmer than that.

When compared to legacy FN products, the gun is smaller than a Hi-Power and is more comparable to an FN 1910/Browning M1955, one of the most classic concealed carry pieces of the 20th Century.

Ideal for the consumer market as a carry or personal protection tool, or for LE as a back-up or off-duty piece, FN describes the 503 as their first entry into the slim 9mm pistol market. It has low-profile sights with rounded edges to help tend towards fewer snags, a very aggressive texture on the grip, oversized surface controls, and bevelling on the front of the slide, with a corresponding bevel on the frame.

The serialized chassis can be removed from the grip assembly, leaving open the possibility of a future swap in something other than the current standard black. 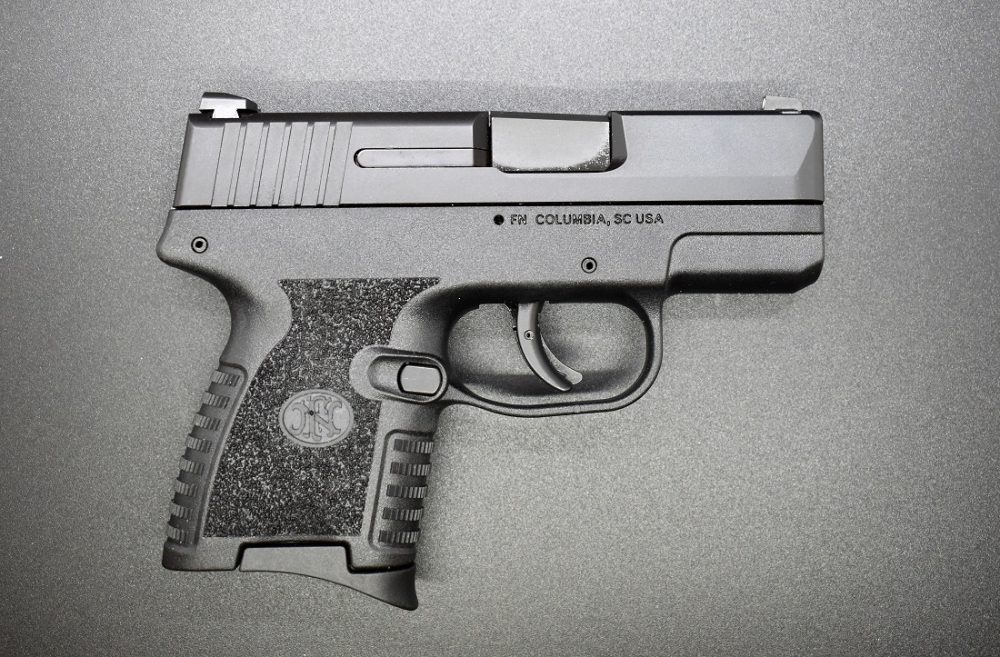 The FN 509 is American-made at FN’s factory in Columbia, South Carolina, and is marked as such. The slide serrations are deep and provide plenty of purchase while texturing on the grip side, front and rear keep the pistol married to the user’s hand. 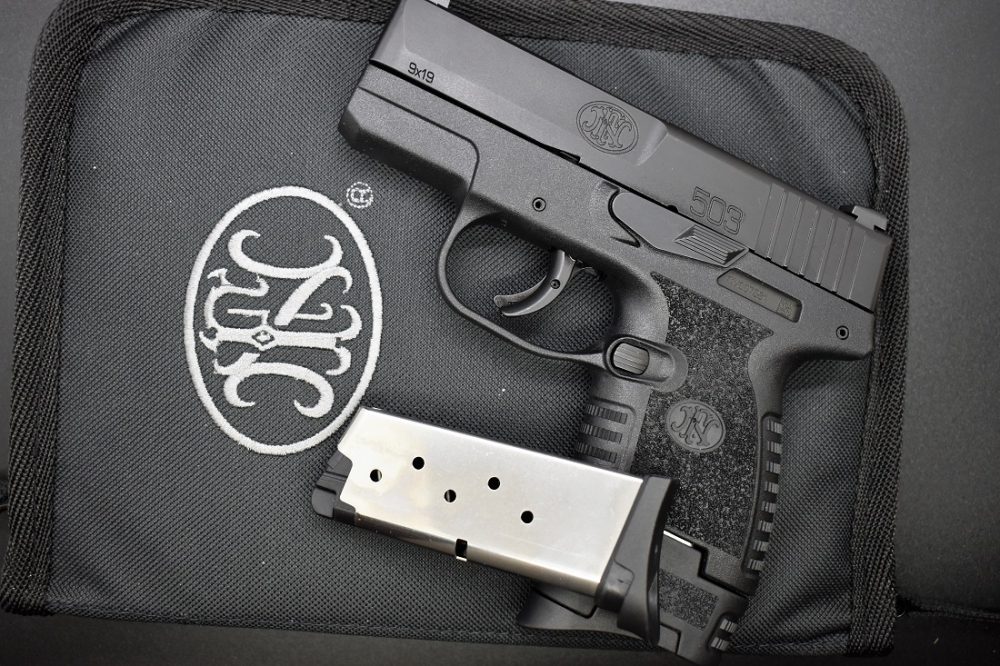 The FN 503 ships in an elegant cardboard box with an FN-branded padded zipper case, locking device, owner’s manual, and two mags. The mags include a flush fit 6-rounder with a pinky grip extension and an extended 8-shot mag with a grip sleeve that adds about an inch to the height. 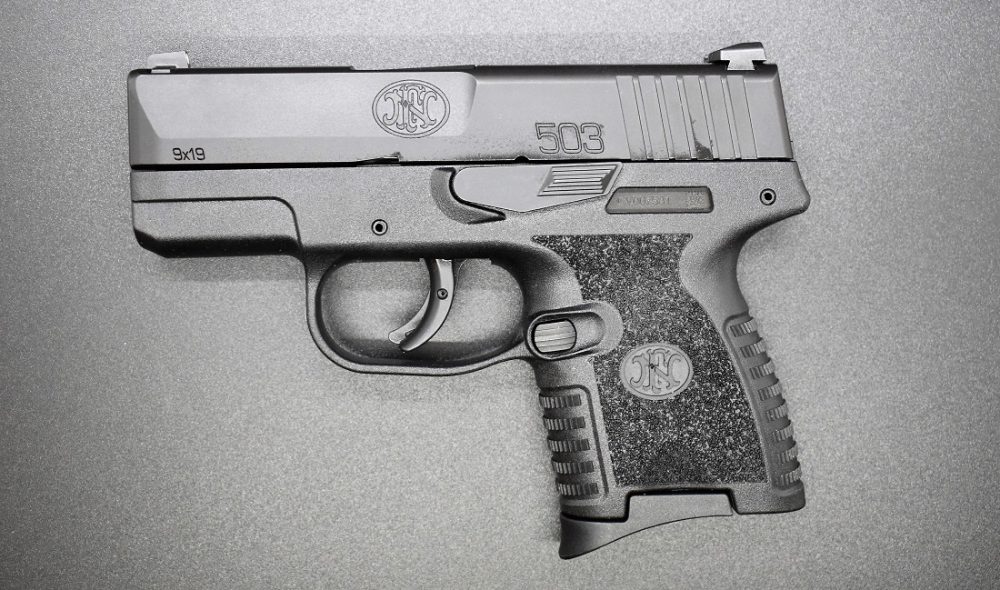 The smaller grip profile provided the best concealability, and a 6+1 capacity. 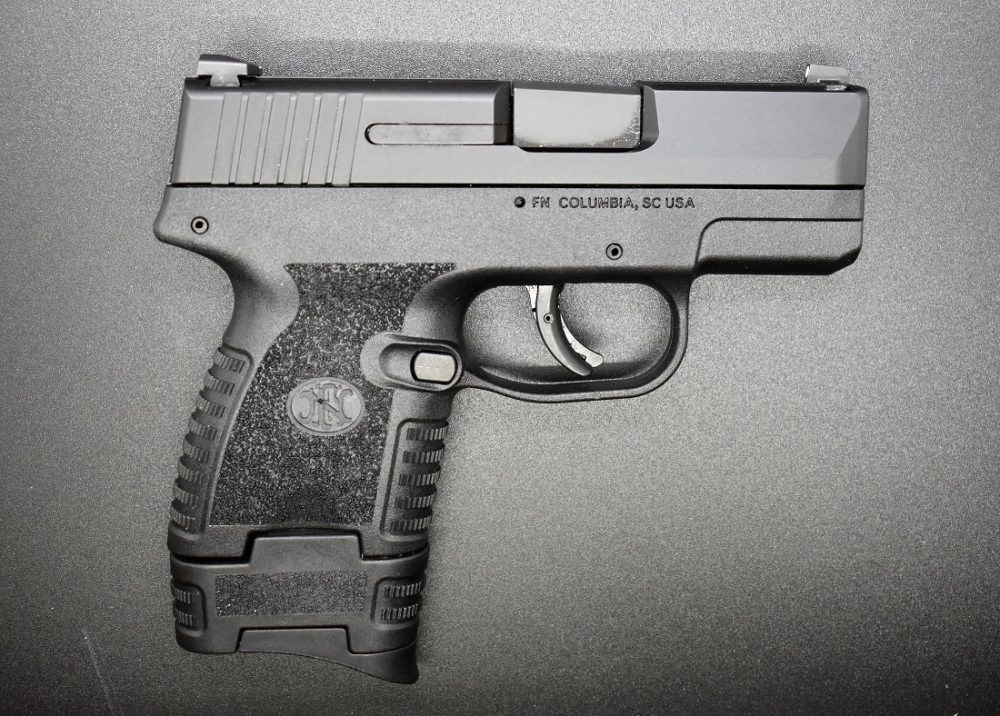 The extended grip makes the gun feel great, especially for those with bigger mitts, but does cut into the optimal concealability a tad. Capacity, as shown, is 8+1 rounds. For FN fans looking for a slightly larger double-stack in the same flavor, the FN 509 Compact series, which has a standard 12+1 capacity and the capability to accept all higher capacity FN 509 magazines, could be an option. Of course, the FN 509 Compact is a larger gun, at 6.8-inches long overall.

When it comes to weight, we found the FN 503 tips the scales at 19-ounces flat without a mag, 23.5-ounces with a loaded chamber and similarly topped-off loaded 6-round mag inserted, and 25.2-ounces with the larger 8-round mag in an 8+1 set up. 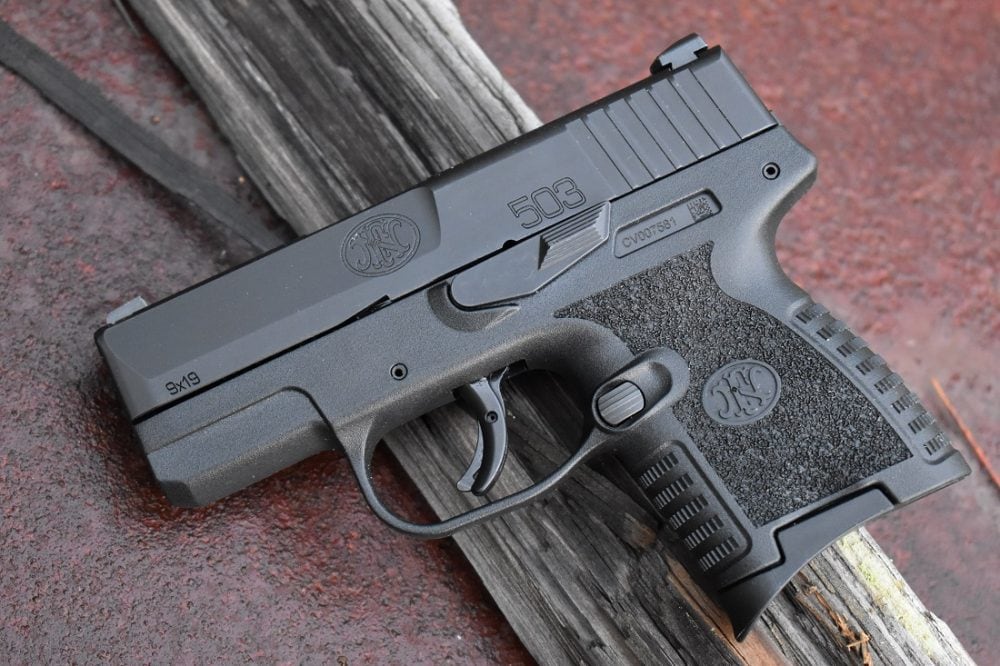 The FN 503 has a steel trigger with a safety lever inset and has what is billed by the company as a 5-to-7-pound trigger. We found ours to break at an average of 5.2, which is sweet for a factory striker-fired trigger pack. Also, note the extended slide stop and fenced-off magazine-release with a raised texture. 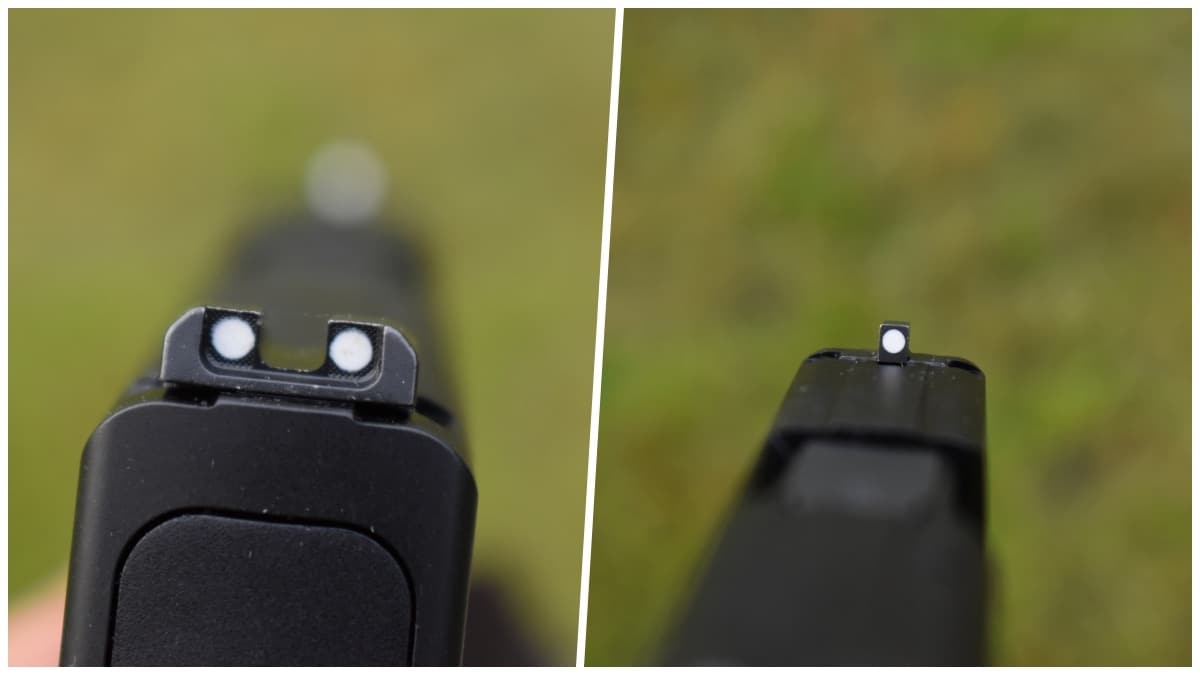 The FN 503 has fixed 3-dot iron sights that are clear and easy to see. Dovetailed into the top of the slide, FN 509-series night sights, and aftermarket replacements are on the menu. 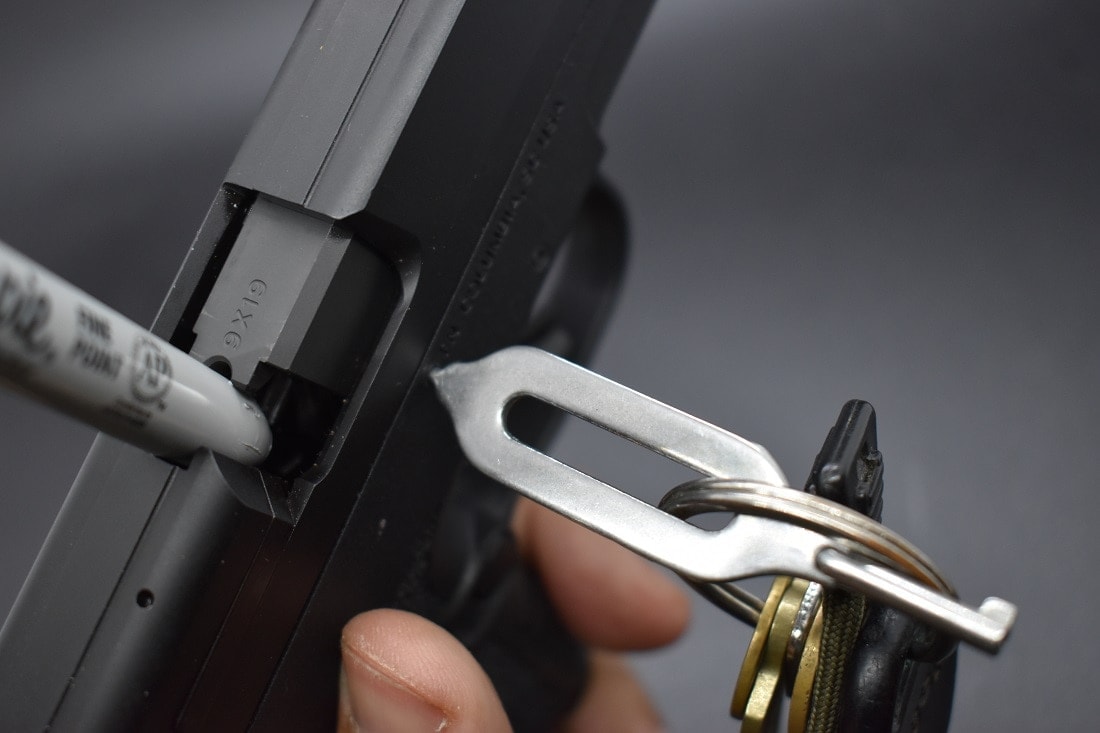 Here is what you come here for! The 503 “can” be taken down without any tools but we found our specimen to be very tight right out of the box. So much so that we couldn’t even get a fingernail under the slide stop to begin to pull it away from the frame. As a workaround, we kept the slide open just enough with the end of a Sharpie and used a handcuff slot lock pin to push the stop out from the other side of the frame via an access hole put there for that purpose. Of course, a small punch could be used, but we had a cuff key on the desk already. 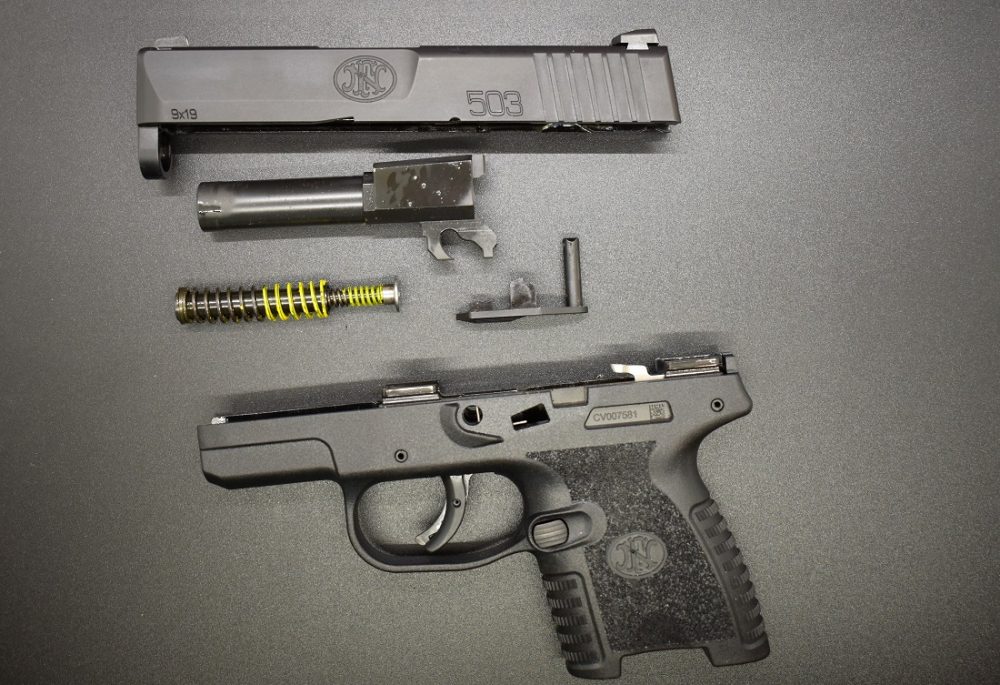 Once disassembled, the FN 503 is very simple and straightforward on the inside. Reassembly and function check is not complicated. The barrel has a recessed target crown and a polished chamber and feed ramp. 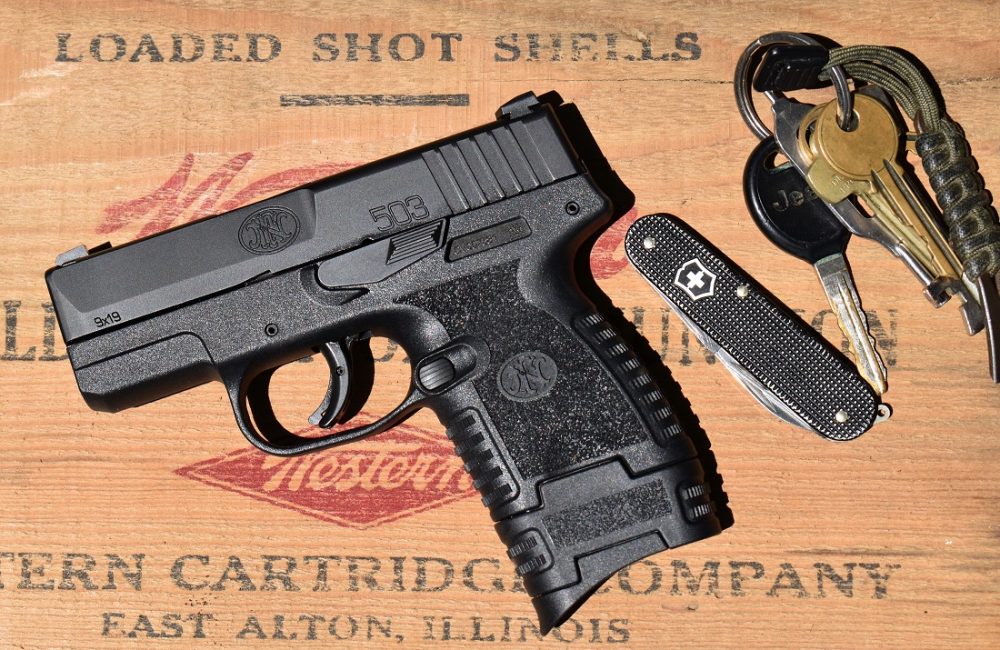 While slightly large for a pocket gun, the FN 503 still checks all the boxes for size when it comes to sub-compact 9mm handguns.

How does it shoot? We are still in the middle of testing that, so be sure to keep an eye peeled for a second article on that subject in the coming weeks.