Frank DeSomma of POF-USA Will Be Missed Dearly 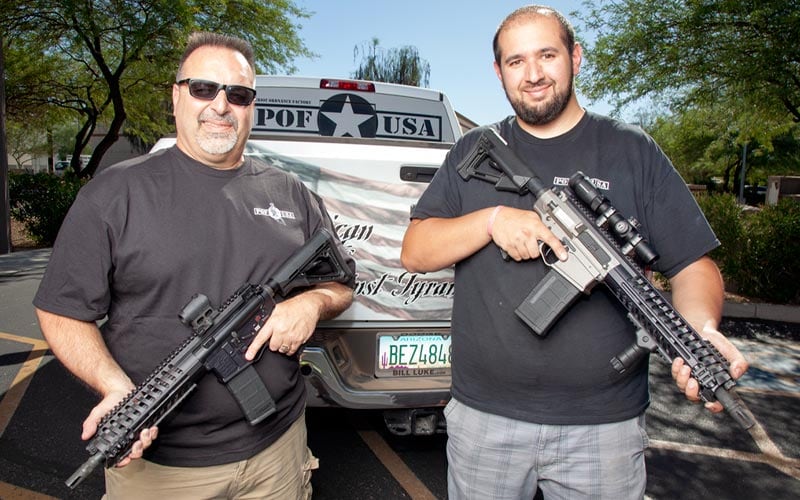 Frank DeSomma and his son Cody, photographed outside the POF-USA factory in Phoenix, Arizona in 2014. (Photo: Ben Philippi/Guns.com)

Frank DeSomma, president and CEO of Patriot Ordnance Factory, passed away yesterday at the age of 57. He will be missed dearly.

He leaves behind a wonderful family and many friends. He also leaves behind a company he poured his heart, soul, and passion into. He loved God, family, country, and freedom.

I had the pleasure of spending some time with Frank over the years. He was always laughing and joking and chasing the American dream. He was a good-natured, lovable guy who inspired the people around him.

In 2014, I had the pleasure of visiting the POF-USA factory and photographing Frank and his son Cody for my book We The People. Frank invited me in with open arms. He was always interested in supporting and promoting the Second Amendment.

It was always a pleasure to see Frank at trade shows. He’d be there all week, excited to talk to everyone about his new products and ideas. In fact, it wasn’t uncommon for him to lose his voice by the end of it.

His experience as an aerospace engineer before starting POF-USA in 2002, set him up for success. With his wife Tracy’s support, he went on to produce some of the industry’s highest quality, most innovative firearms.

Perhaps his most revolutionary product was the aptly named Revolution rifle. It was the smallest and lightest .308 semi-semi-automatic rifle on the market at the time, and won ‘Rifle of the Year’ three years in a row.

Despite his success, Frank was never one to sit back and be satisfied. He was always pushing forward, always innovating, always chasing his dreams. On November 11, 2017, he opened a brand new 27,000 square foot factory in his hometown of Phoenix, Arizona. His whole family came out to celebrate. I was fortunate to be invited and I put together the video below.

We’ll miss you, Frank. You were a good man. Rest in peace, brother. Our thoughts and prayers are with your family.