70th Anniversary of Korean War: The Guns They Carried 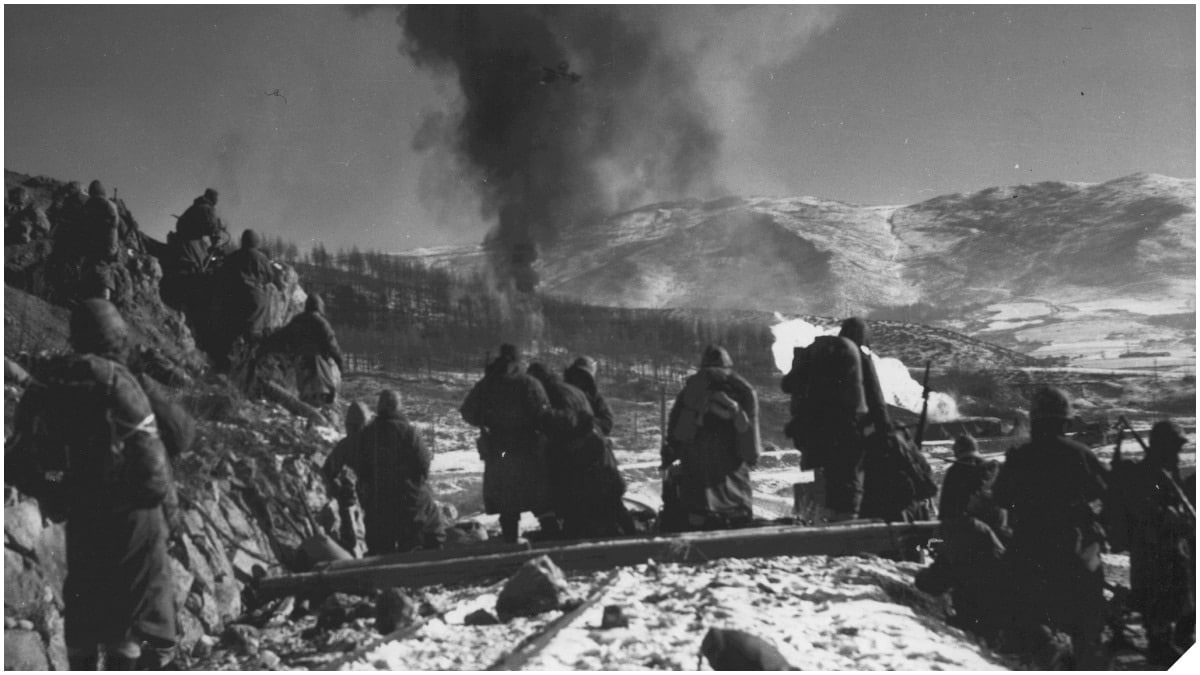 Some 70 years ago this month, the first U.S. combat troops were rushed to the aid of embattled South Korea, beginning what is often referred to as the “Forgotten War.”

The Soviet- and Communist Chinese-allied North Korean forces invaded their neighbor to the south on what that dictatorship deemed the “Fatherland Liberation War” on June 25, 1950, crossing the 38th Parallel. By July 2, the initial U.S. troops, that of the ill-fated Task Force Smith, had landed in South Korea, flown in from nearby Japan. Within days they were involved in the Battle of Osan and for the next three years fought a see-saw campaign with, first the North Korean Army, and then upwards of 3 million Chinese “volunteers” who were supported by Soviet aid.

In all, more than 1.7 million U.S. troops would fight to keep South Korea free, with over 50,000 paying the highest price. 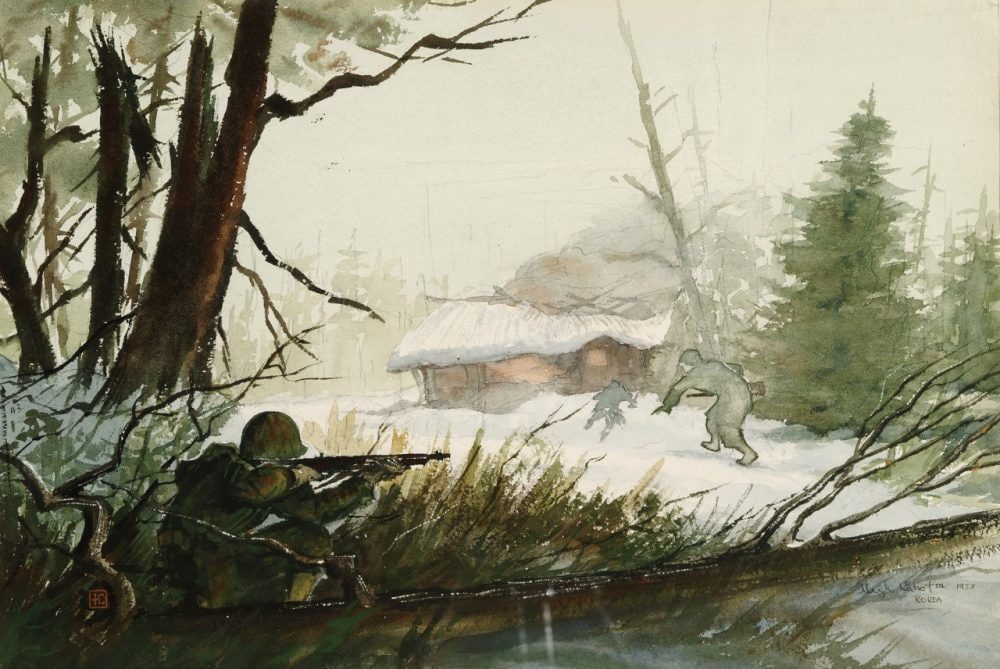 As the Korean War began a half-decade after the end of World War II, it is easy to just shrug and say that the U.S. Army and Marine troops who fought in the conflict were armed with the same gear they carried on D-Day and at Iwo Jima. Well, yes and no.

The M1 Garand, standard rifle of the U.S Army from 1937 and the Marines from 1942, continued to see front-line service in Korea. A gas-operated semi-auto chambered in .30-06, the Garand was fed by an 8-round en-bloc clip that was inserted into the action wholly, with the clip itself ejecting when the magazine was empty with a famous “ping.” Standard GI from Normandy to Okinawa, the Garand was heavy, at about 9.5-pounds, but reliable. 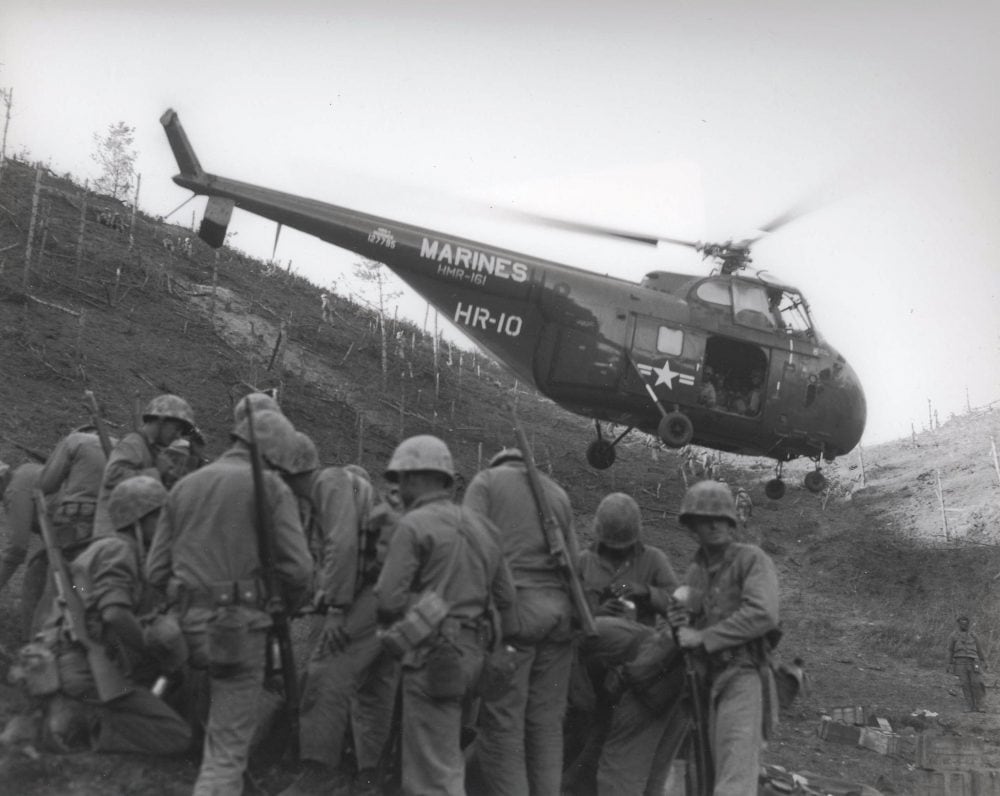 While Uncle Sam had millions of Garands on-hand after peace broke out in 1945, dwindling numbers resulted in new contracts issued during the Korean War to International Harvester and Harrington & Richardson to produce a further 1.5 million M1s.

Notably, both the Army and Marines shifted from M1903A4 bolt action sniper rifles, a staple of WWII, to accurized Garand precision rifles complete with side-mounted optics (to allow the clip to be top-loaded), cheek pads, and distinctive flash hiders. These guns, the M1C and M1D depending on scope mount and muzzle device, were largely unique to the Korean War as they were developed too late in WWII to see much service and saw only limited use in Vietnam. 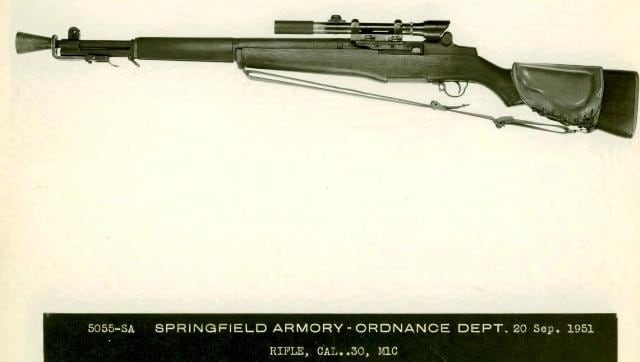 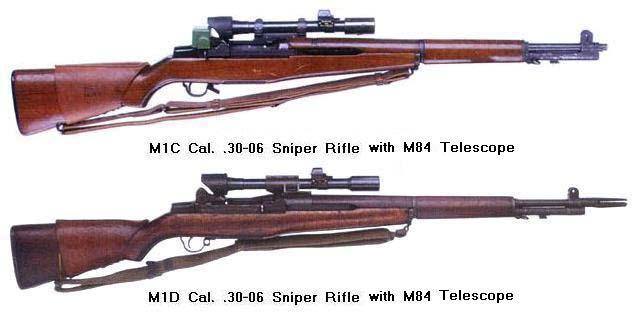 The M1D is easily identified by its muzzle device. The flash-hider was often ditched in the field. (Photo: Springfield Armory National Historic Site)

With that being said about the M1C and M1D, the Marines still brought a few M1903A4s, topped with 8× Unertl scopes, with them to Korea, where they were put to good use. (Photo: U.S. Marine Corps Archives)

Often seen in a supporting role in the conflict was the WWII “war baby” M1 Carbine. A smaller weapon than the M1 Garand, the little Carbine was chambered in a mid-sized .30-caliber round and used 15- and 30-round detachable magazines. A select-fire version, the M2, was also available although less frequently encountered.

The M1 Carbine, seen here at use in the liberation of Seoul in September 1950, was popular due to its size and faster reload, although its round was not as effective, especially at distance, as the .30-06 of the larger M1 Garand. (Photo: Libary of Congress)

One of the most interesting small arms fielded by the U.S. and their allies in the Korea War was the M3 Carbine, a select-fire M1 that was fitted with an infrared sniper scope, useful in night engagements. 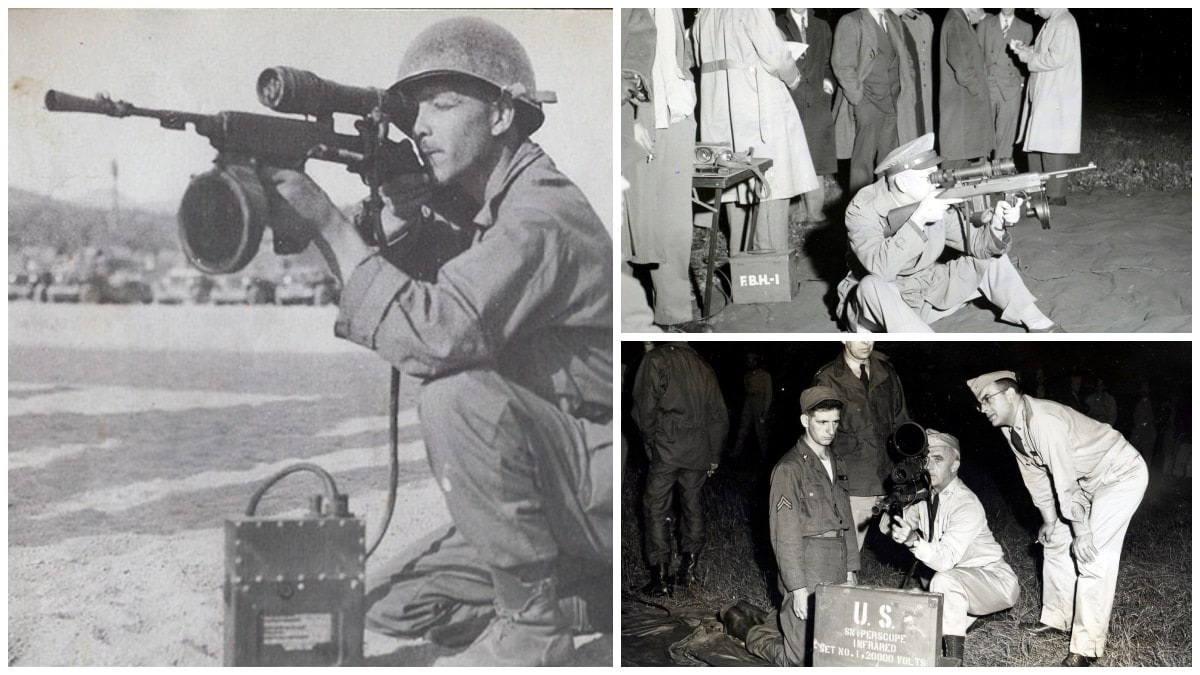 When it came to submachine guns, the Korean War was in many ways the golden era of sub-gun conflict with U.S. forces, particularly tank crews, carrying the M3 Grease Gun while allied forces used a range of guns including Patchetts, Owens, and M1/M1928 Thompsons. On the other side, they faced off against Soviet-supplied PPsh-41 and PPS “burp guns” as well as Chinese-supplied select-fire Broomhandle Mausers and the occasional Tommy gun delivered to the old Chinese government via Lend-Lease in WWII. 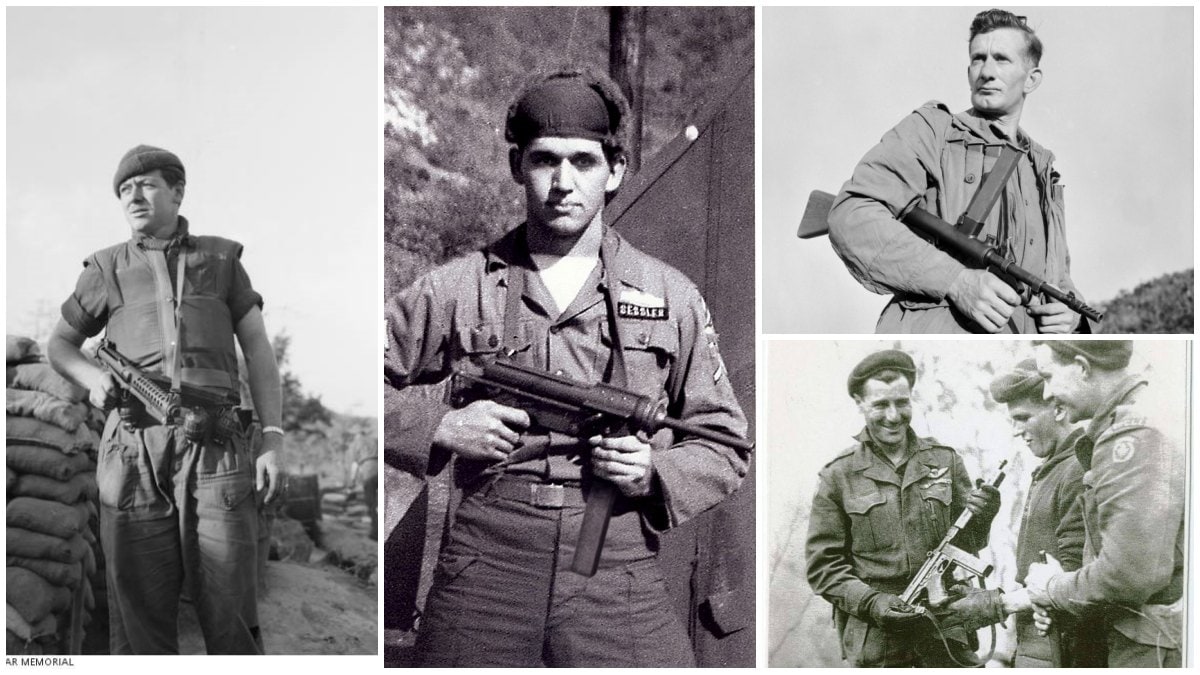 Sub guns of all sorts were common in Korea in 1950-53 including British Patchetts– the forerunner of the Sterling– American M3 Grease Guns, Australian Owens and, of course, Tommy guns of all flavors. (Photos: Australian War Memorial, National Archives, Imperial War, Library & Archives Canada) 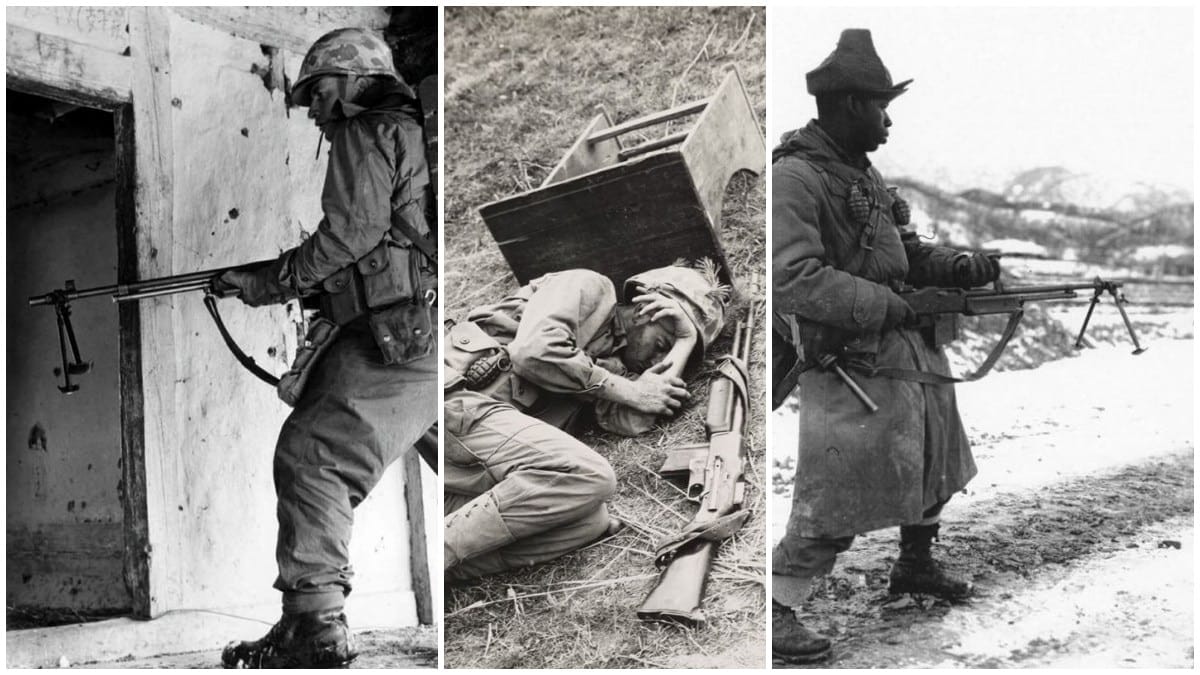 The .30-06-caliber M1918 Browning Automatic Rifle, or BAR, was heavier than the Garand but was capable of full-auto fire for as long as its 20-round box mags held out. Designed to conquer “No Man’s Land” in the Great War, it proved itself in WWII and Korea against very different foes. (Photo: USMC Archives, National Archives) 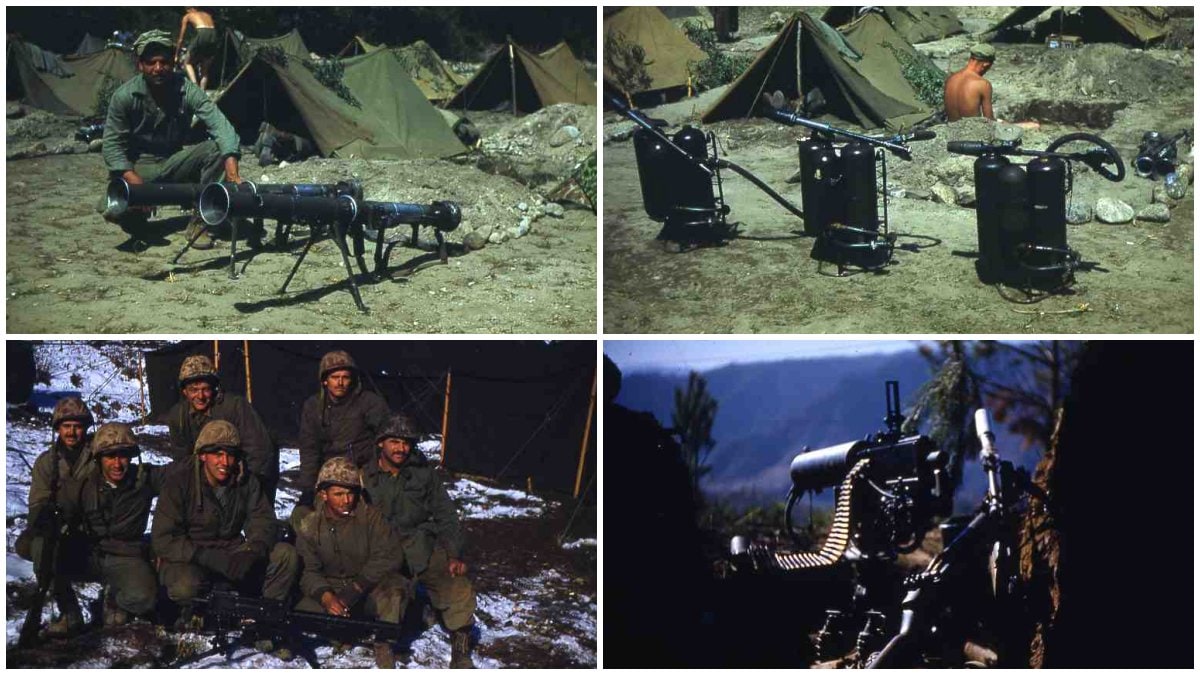 For use against bunkers, vehicles, enemy tanks, and massed wave attacks, U.S. forces relied on a mix of bazookas, flamethrowers, and recoilless rifles to augment both light and water-cooled machine guns. (Photo: USMC Archives)

The last line of personal defense when it came to firearms was the familiar GI .45, which had been with America’s fighting men since 1911, through two world wars. 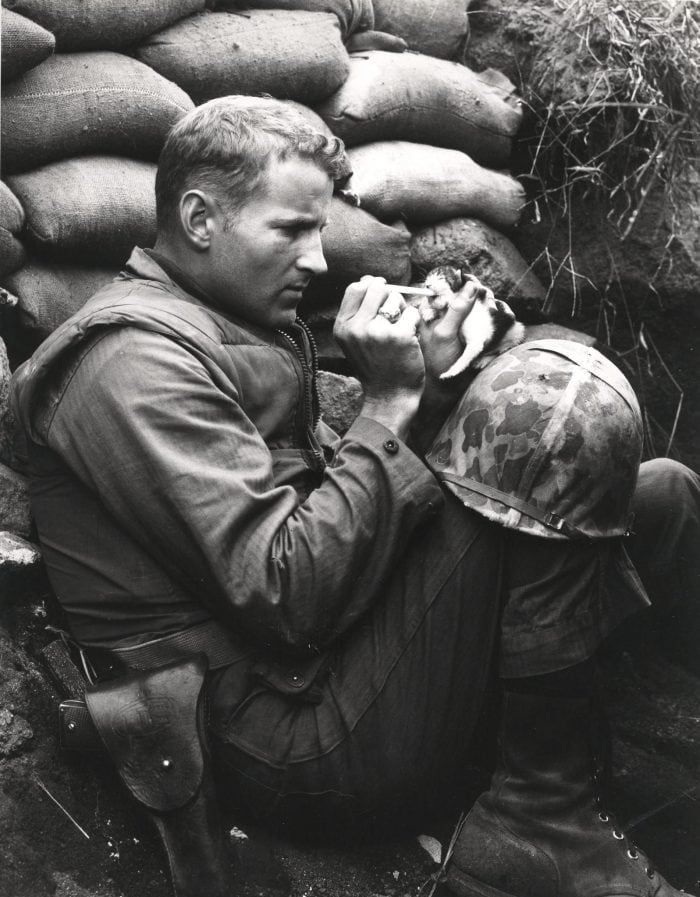 This famous image shows M1911-armed Marine Sergeant Frank Praytor and “Miss Hap,” in Korea, October 1952, with the baby kitten so named because she was ” born at the wrong place at the wrong time.” (Photo: U.S. Marine Corps Archives)

Make no mistake about the conflict, while the U.S. did a lot of the heavy lifting, the South Korean, or more appropriately, the Republic of Korean military provided the most boots on the ground in what was a brutal civil war in many cases. Likewise, they suffered enormous casualties, approaching 400,000 killed and missing. Formed in 1948 as a constabulary force with U.S. assistance, the ROK Army by the end of the Korean War stood nearly 600,000-strong and continues today to be one of the largest and best-equipped military forces in the world. 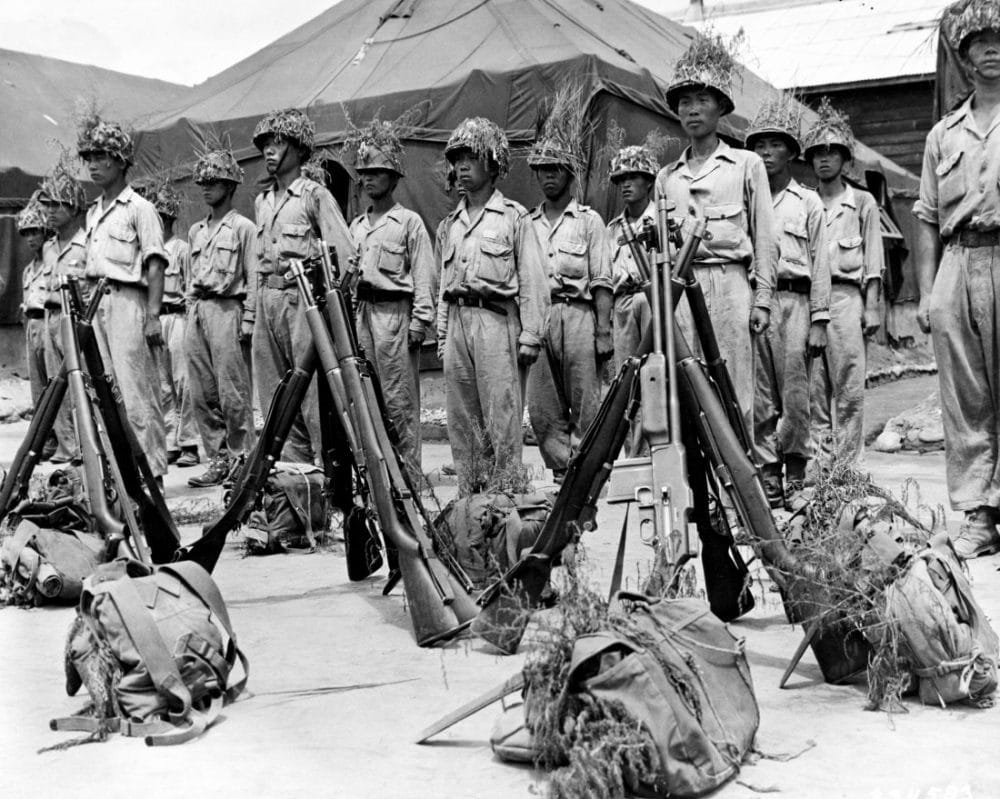 The ROK Army was equipped along U.S. lines, using M1 Garands and Carbines, M1918 BARs, M1919 Brownings, M1911A1 handguns, and the like. Korea received 296,450 M1 rifles and still reportedly has warehouses full of them. Pictured: Soldiers of the Republic of Korea during an inspection, Jan. 1950. Note the M1918 BAR in the foreground stack. (Photo: U.S. Army Photo)

Over 21 countries contributed troops to the conflict to keep South Korea free, led by the British which had some 80,000 personnel who served on the Korean Peninsula. The typical British, Australian, and Canadian troops, as well as some European allies such as the Belgian battalion, showed up in Korea with WWII standards, such as the Enfield .303-caliber bolt-action magazine rifle, and BREN light machine gun. 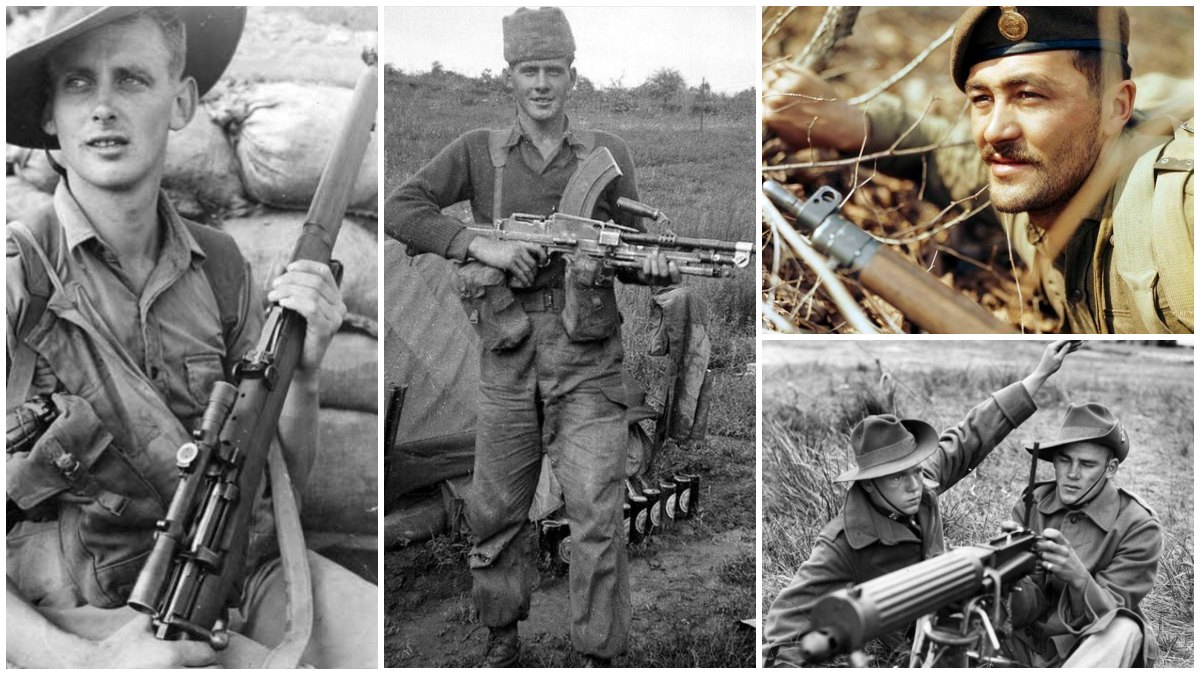 From left to right: an Australian soldier in Korea with an Enfield sniper rifle variant, a British trooper of the Royal Norfolk Regiment in Korea with his trusty BREN gun, a soldier of the 2nd Battalion Princess Patricia’s Canadian Light Infantry gripping his No. 4 Enfield on a hill in Korea, and an Australian Vickers machine gun crew near the Tanjong River. (Photos: Australian War Memorial, Imperial War Museum, Libraries & Archives Canada)

Other allies such as Dutch, French, Ethiopian, Greek, and Turkish troops looked much like U.S. troops due to post-WWII military aid. Even the tiny country of Luxembourg did their part. 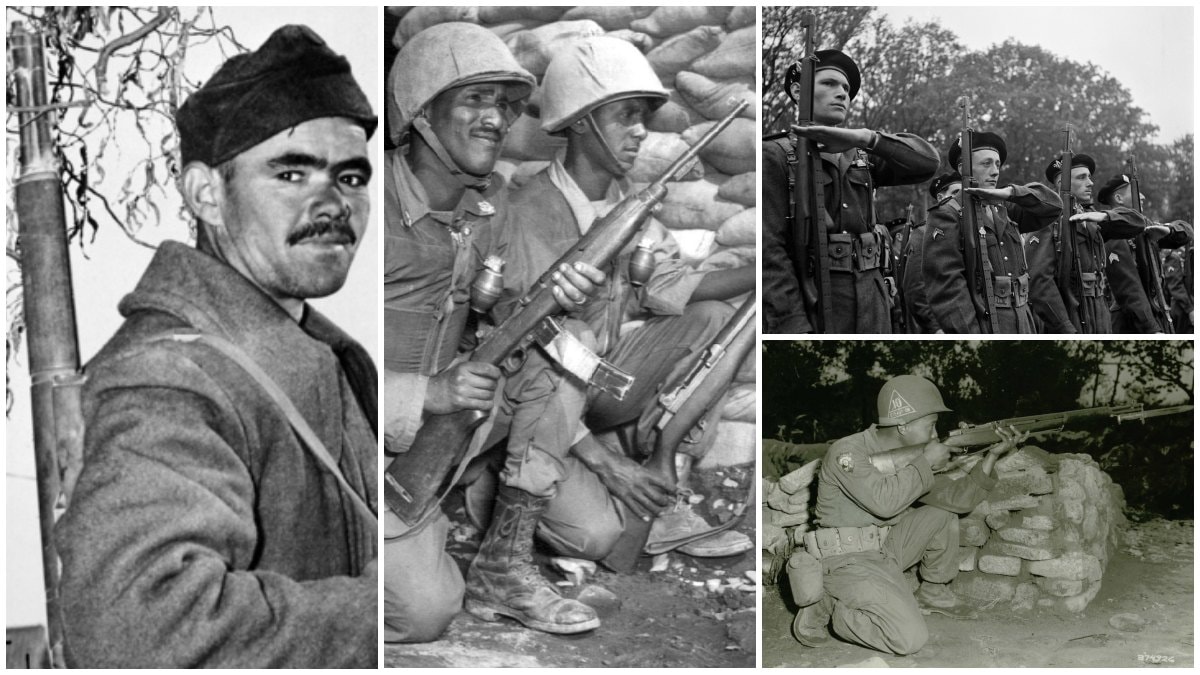 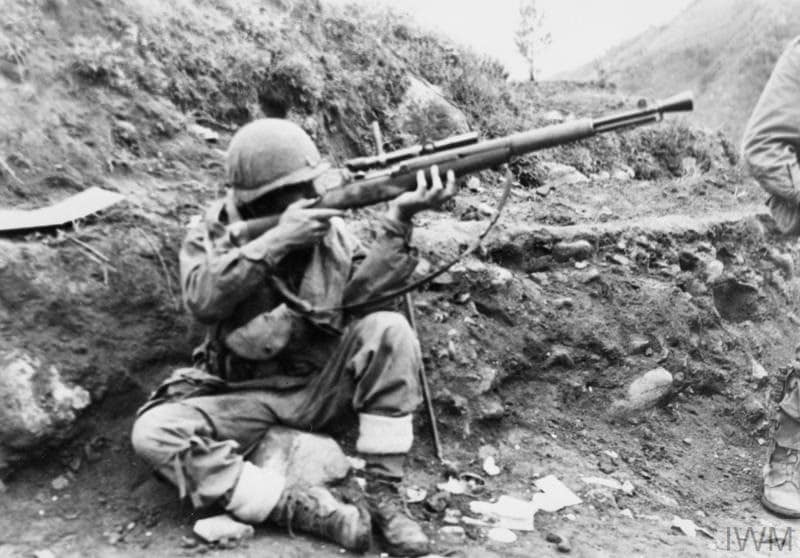 This soldier with an M1C sniper rifle and M82 scope may seem to be the average GI in Korea, but is, in fact, Sergeant Wedei Huizen, of the Netherlands Regiment van Heutsz detachment, in position to return Chinese sniper fire. The Dutch Army termed the M1 the “Geweer Garand” (Photo: Imperial War Museum) 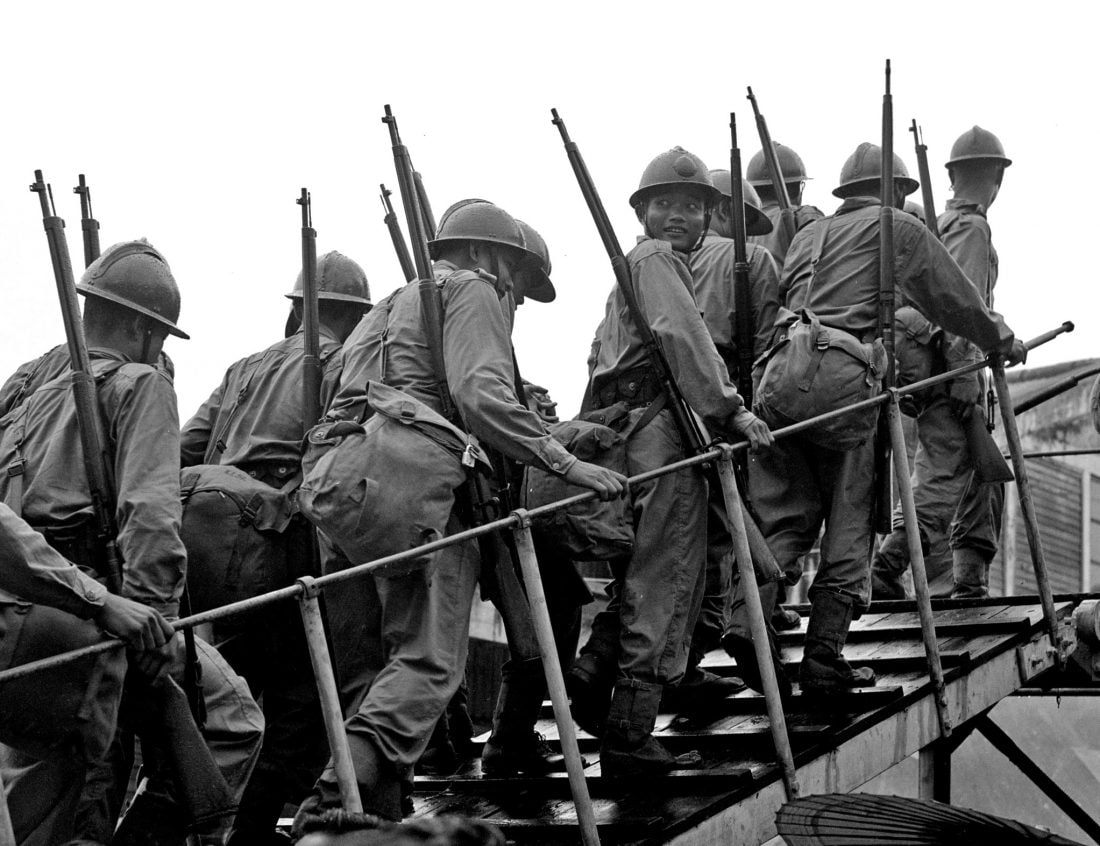 One historical curiosity was the contingent supplied by the Royal Thai Army, who left for Korea in October 1950 wearing French Adrian-style “sun” helmets and armed with 8x52mm Type 66 Siamese Mausers that were actually versions of the bolt-action Japanese Type 38 Arisaka built before WWII at Japan’s Koishikawa arsenal. Ultimately, more than 10,000 Thai troops would serve in the Korean War alongside U.S. forces, fighting notably at the Battle of Pork Chop Hill. (Photo: UN News Archives)

Today, the Korean War Veterans Memorial on the National Mall in Washington, D.C., dedicated in 1995, has 19 stainless steel statues representing U.S. troops from the Army, Marines, Navy, and Air Force. Rightfully, they are a mix of races and are portrayed with a variety of small arms including M1 Garands, M1 Carbines, BARs, and light machine guns. 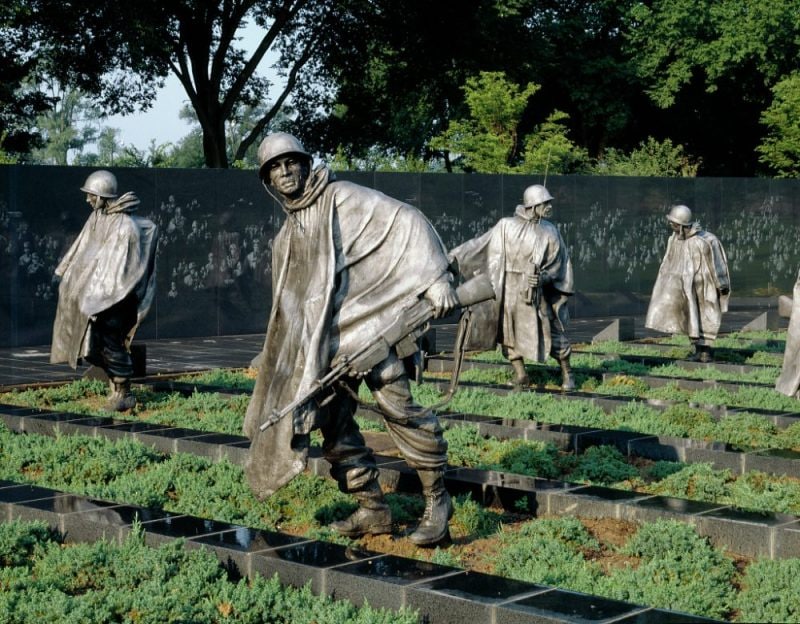 The Memorial reminds the country that “Freedom Is Not Free.” (Photo: Library of Congress)

For more information on the Korean War, there are a number of free books and publications available through the U.S. Army Heritage and Education Center as well as the Navy History and Heritage Command and the Marine Corps History Division. Additionally, the Army has set up a new commemorative website with photos and art as well as other documents related to the conflict. For those homeschooling or just curious about their knowledge of the Korean War, there is also a quiz.

If you are interested in history, head on over to our Military Classics section, where historic arms are just a click away.