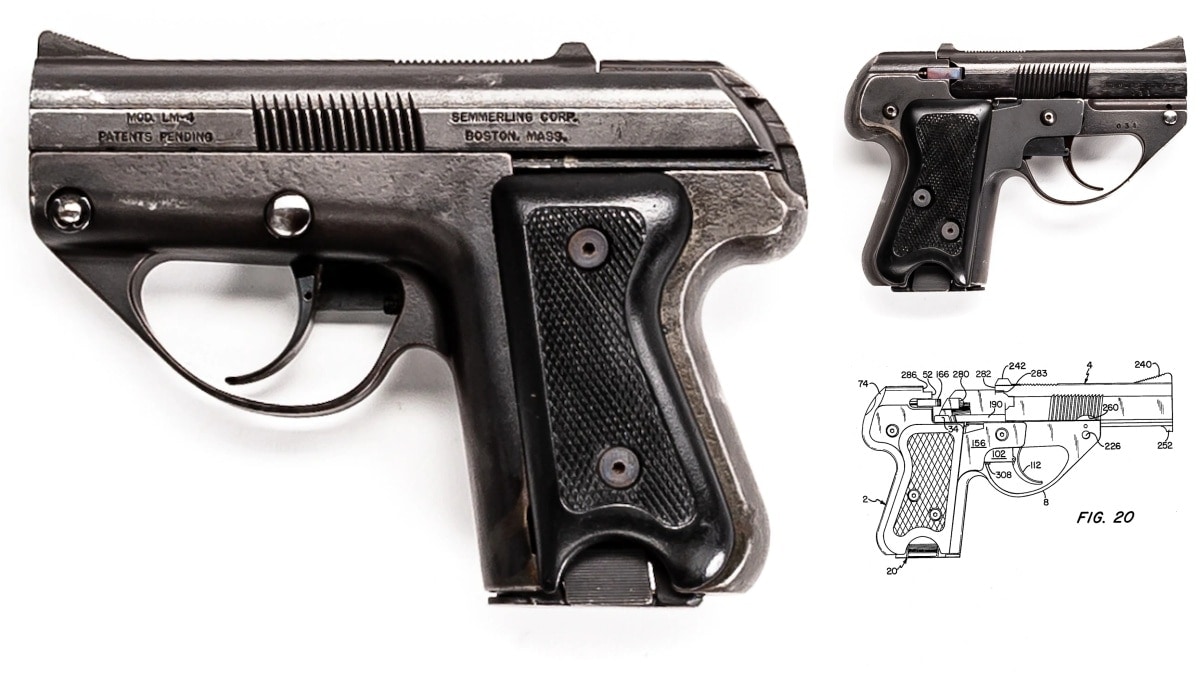 This amazingly rare Semmerling LM-4, serial number 31, is up for grabs in the Guns.com Vault for the decerning collector. It looks like a small semi-automatic. But it only looks that way. (Photo: Guns.com)

An unusual micro-compact .45ACP designed in the 1970s with something of a cloak-and-dagger history behind them, the Semmerling LM-4 is among the most sought after of collectible handguns.

One could not talk about the LM-4 without covering its father, Philip Lichtman. Harvard educated and the holder of more than 30 patents, mostly for innovative surgical instruments, Lichtman was described in his 2017 obituary as having “seven avocational passions in the course of his life: fishing, model airplanes, butterflies and entomology, telescopes and astronomy, cars, guns, and collecting and restoring oriental rugs.” 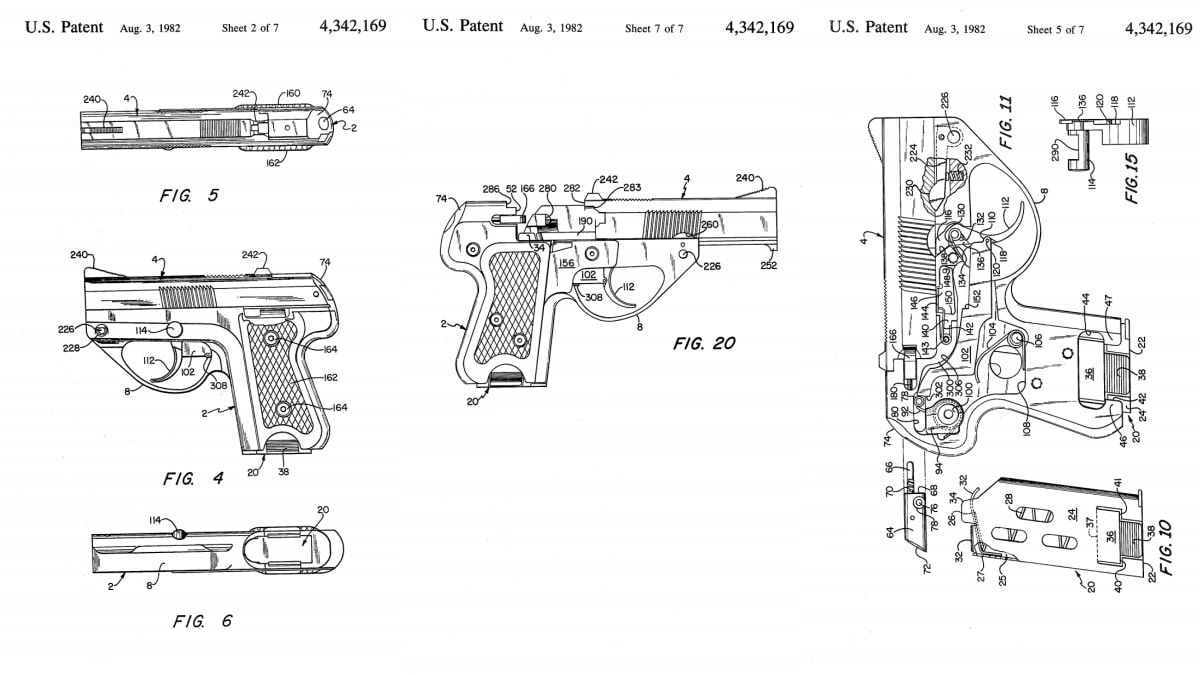 Across the course of three patents filed between 1973 and 1980, Lichtman laid out a curious manually-operated handgun design that became the LM-4 in a series of no less than eight claims detailed in 46 drawings.

Originally billed as a “vest pocket .45” built for maximum concealment in mind, the 4+1 shot pistol was only 5.2-inches long, 3.7-inches high, and a svelte 1-inch wide. For reference, this puts it in the same neighborhood as common .32 ACP and .25 ACP pocket pistols, but in a much larger caliber. Today it still holds the title as perhaps the smallest .45 ACP that isn’t a derringer and, for comparison, it is about the same size as a Ruger LCP. 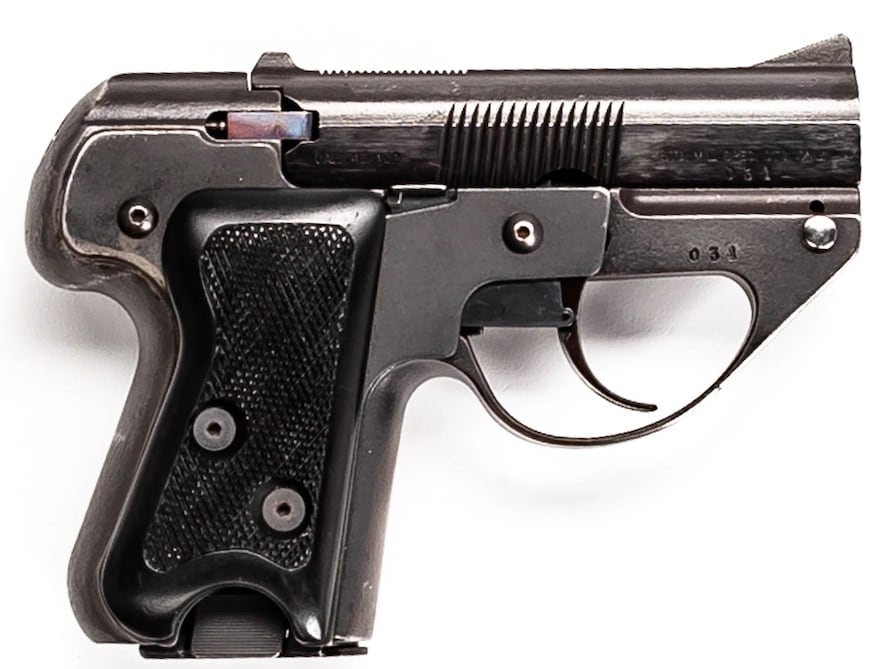 Note the massive extractor hook which grabs spent cartridges as the “slide” is manually pushed forward to work the action. The right side of the slide is marked “Cal .45 ACP”, and “Std. Mil. Spec. Ctg. Only” with serial  “031”.

With the first round in the chamber ready for immediate use, reloading was accomplished by manually racking the slide forward about 1.5-inches and then pulling it back into battery. This sounds awkward, but with practice, the slide could be pushed forward with the thumb of the off-hand and five shots could be fired in 3 to 4 seconds. A one-handed “snap” can also be used in theory and is detailed in the manual.

To help mitigate recoil, as there is no spring to eat it up, the pistol weighs a hefty 24-ounces.

The Lichtman LM-4 was teased on the market as early as 1975 and in the May 1977 issue of American Handgunner an early pistol (serial number 14) was tested by George Nonte who described the unusual gun as having manageable felt recoil for what it was, saying, “I’ve not found its recoil or jump noticeably worse than a .45 Colt LW Commander weighing over a third of a pound more.” And this penned by a gun writer back in the age where you could buy .45 Auto Mags new.

Price at the time was $645, which works about to about $3,100 in today’s dollars, to which Nonte noted, “But, if it can save your life, who can say that’s too much? You pay more for life insurance, and it only pays off after you’re dead!!”

By 1978, the gun was being marketed as the Semmerling LM-4, manufactured in Boston, where less than 600 pistols were produced– using S7 tool steel and much hand-fitting– by 1982. The smallest 5-shot .45 ACP on the market, the LM-4 was pitched for use as a backup gun for law enforcement, a deep concealment piece for those in need of one, or clandestine use by overseas intelligence officers. In short, something of an even smaller answer to Paris Theodore’s ASP 9mm of the same era. There was at least one small contract with the U.S. Army for the LM-4 according to Fjestad. All of this lent greatly to the Semmerling’s enduring collector’s status. 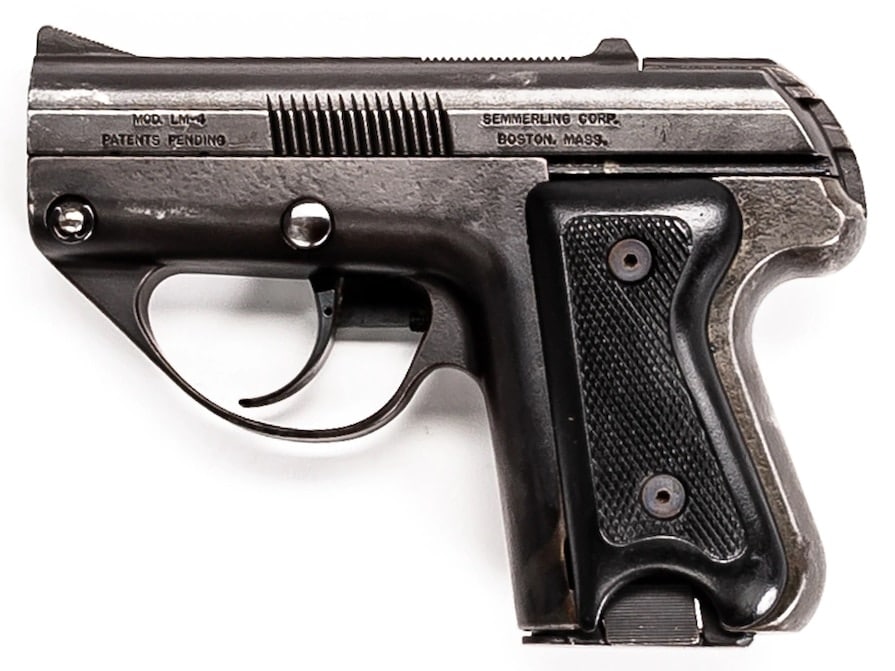 The “LM” in the model numbers stands for the “Lichtman Model” of which the first three were non-production prototypes. The left side of the slide is marked “Mod. LM-4 Patents Pending” and “Semmerling Corp. Boston, Mass.” 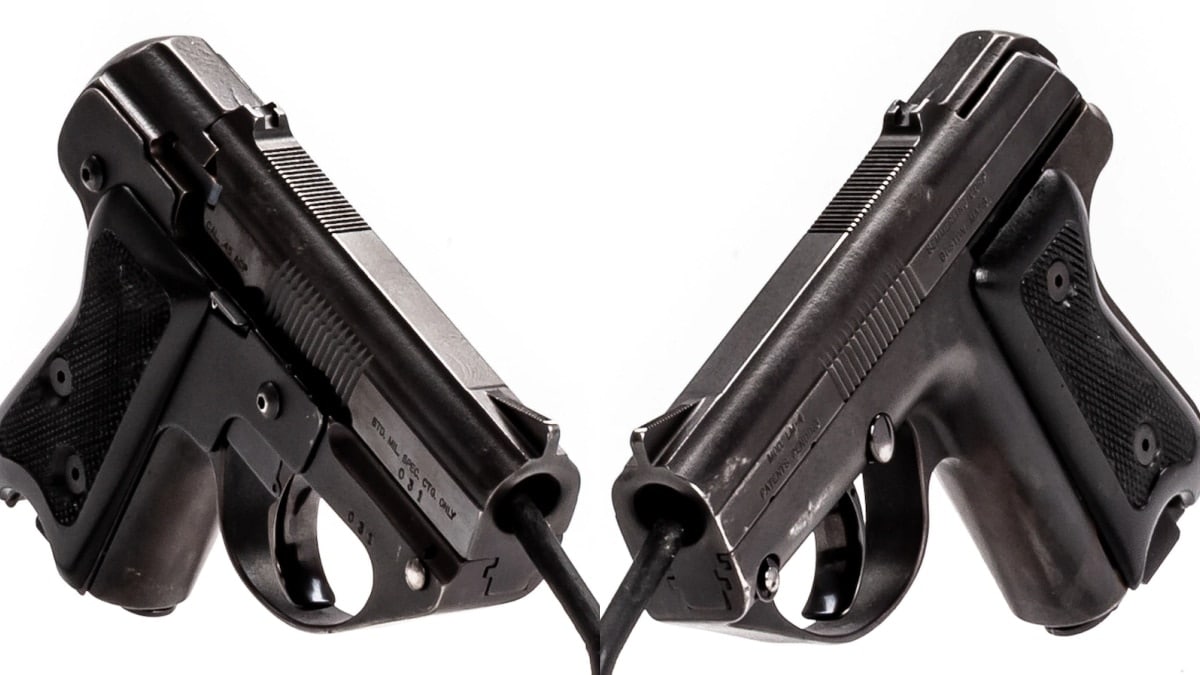 The front sight is a fixed serrated ramped blade with the rear being a simple square notch. The top of the slide is serrated to allow the operator to use the thumb of their off-hand to push the slide back and forth, working the action. With a little practice, the LM-4 could be fired about one shot per second.

In 1982,  the company’s trademarks and patents were bought by Texas-based American Derringer, who made a variant of the pistol until 1998 and continues to do so on special order– for $4,250. Arguably, you could go with something like the slightly larger Glock 30 today for practical carry purposes, which offers an easier manual of operation but falls far short of the 1970s covert cool factor.

ADD THE LM-4 TO YOUR COLLECTION