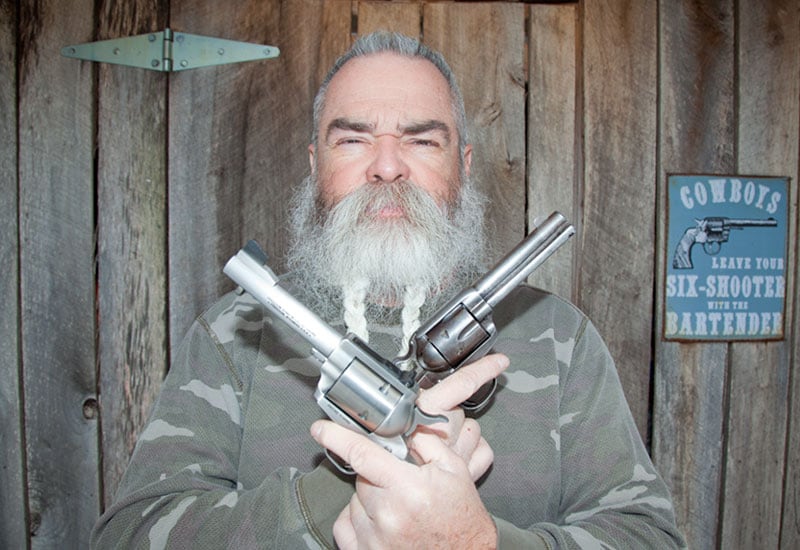 Jeff Quinn of GunBlast photographed in 2014 at his home in Dover, Tennessee. (Photo: Ben Philippi / Guns.com)

It is with much sorrow that we say goodbye to Jeff Quinn of GunBlast, who passed away on July 27, 2020. He leaves behind a wonderful family who loved him dearly, as well as many friends.

Quinn was a “salt of the earth” kind of guy, a “gentle-soul” as his brother Boge put it. He loved God, family, and life. I think it’s safe to say that he lived his life the way he wanted, and enjoyed himself much of the time.

When he decided to pursue gun writing in 1999 as a hobby, few expected him to revolutionize the firearms industry — but that’s exactly what he did.

Tired of reading contrived gun reviews in his favorite gun mags, Quinn asked his more tech-savvy brother Boge, “If I could write about the gun, can you put it on the internet thing?” Boge agreed and Quinn got to work.

He started photographing and writing about guns in a comprehensive manner. “At first, we just reviewed guns that we already had,” said Boge who took Quinn’s data and entered it into his computer. They put it online on a website they called GunBlast. At the time, no one else was doing it, and the internet was still very young.

With their site up and running, they attended their first SHOT Show as GunBlast in the early 2000s. They visited manufacturers and asked if they could review their guns. “A couple of the gun companies would look at me like there was something wrong with me,” recalled Quinn.

Fortunately, a few companies saw the potential and started sending guns for review. Quinn’s personality and look resonated with the gun crowd. You knew right away that he absolutely loved guns and wanted to pass on this passion to the reader. As a result, GunBlast took off. The success called for another addition, by way of another Quinn brother, Greg, who joined the team to help with advertising sales. After nearly two decades, the GunBlast channel garnered more than 64 million views. What started as a hobby, became a full-time job.

On a personal note, Quinn was responsible for getting me even more hooked on guns in 2005 when I read his review of a big stainless steel Ruger revolver. I’m so grateful that I had the chance to visit with him a few times at his home in Dover, Tennessee, and to film a short documentary about the GunBlast brothers in 2018.