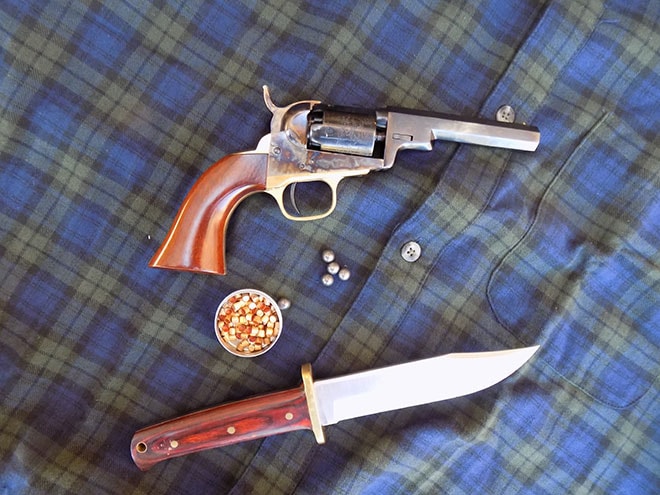 When it comes to percussion revolvers made today, .44 caliber guns rule the day. The .36 caliber guns are miles behind, but still relevant. But the little .31 caliber pocket revolvers are nearly forgotten today. Thankfully, a few are still made today and I have had the pleasure of owning and shooting them all. 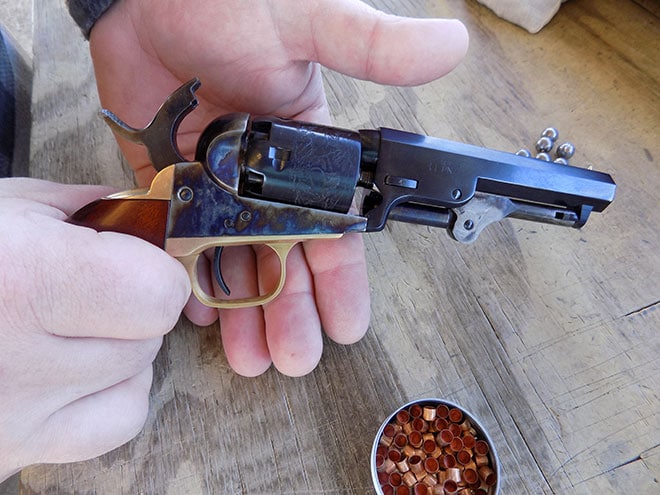 Why do I like the little 31s so much? To be short, these small guns were the start of the concealed carry market we now know today. When Colt came out with his “Baby Dragoon” model in 1848 especially for civilian use and sale, the concealed carry handgun was born.

Colt’s Baby Dragoon was not the first revolver on the market nor the first small handgun designed for concealed carry, but this humble little five-shooter was the first handgun to combine the rapid, repeating fire of the large revolvers that came before it while still staying small.

Before the Baby Dragoon came on the scene, revolvers were being made mostly with military use in mind. The 1847 Walker and 1848 Dragoon series of revolvers in .44 caliber were around — and they were powerful. But they weighed about five pounds. 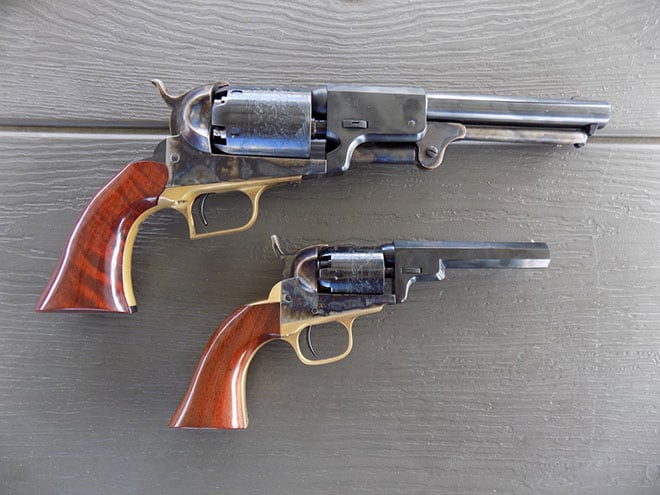 The Colt Dragoon was a large Army revolver in which the little Baby Dragoon was derived. (Photo: Terril Herbert)

Why were these big 44s so massive? Steel manufacturing was very limited at the time and it would not be economically viable until the 1850s, so most firearms were made of wrought iron at the time. The Walker and Dragoon had to be large to withstand the big, heaps of gunpowder they were expected to digest. The guns were made for carry on horseback, never in a hip holster.

In the Mexican War, these handguns proved the revolver concept, but Colt needed a safety net of sorts once war was over. He needed a gun that would be popular with civilians, especially with Western expansion now in full swing.

Colt had the big Dragoon revolver downsized and what ultimately went to market was the Baby Dragoon. It was a good idea, but the Baby did not sell as well as expected — mostly because of the laborious loading procedure. With a few improvements — a loading lever and an improved cylinder stop system — the 1849 Colt was born. The 1849 was made until 1873 and was Colt’s most popular handgun in that century.

Uberti is making a fine version of the Colt Baby Dragoon revolver. The gun is quite small, weighing just over a pound. The gun is stocked with a one-piece walnut grip and uses a brass trigger guard and grip frame. 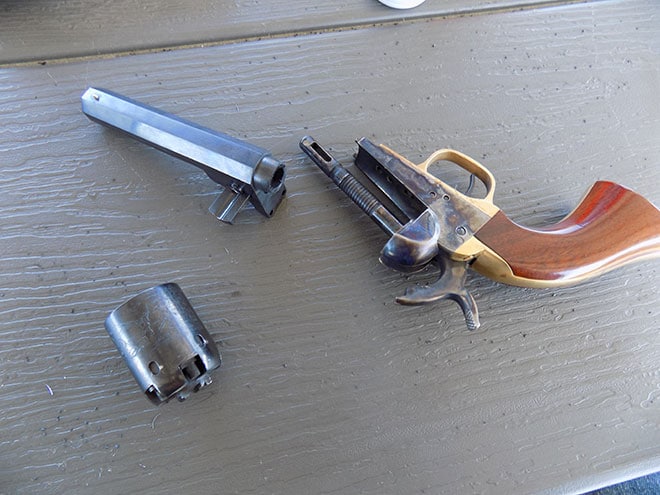 The Colt Baby Dragoon had to be taken apart so the gun can be loaded. (Photo: Terril Herbert)

Unlike the original guns, Uberti’s Baby Dragoon is made from modern steel, and thus more durable. The Baby has an unfluted, but engraved five shot cylinder and octagonal barrel. The sights are typical Colt with a notch on the hammer opposed with a brass bead front sight.

Like the big Dragoon, the Baby features oval cylinder stops — which were done away with in the 1849 model. However, Uberti’s Baby doesn’t have the squared off trigger-guard that the big Dragoon uses.

The Baby Dragoon has no loading lever — a potential deal breaker back then. The pistol must be disassembled for loading. 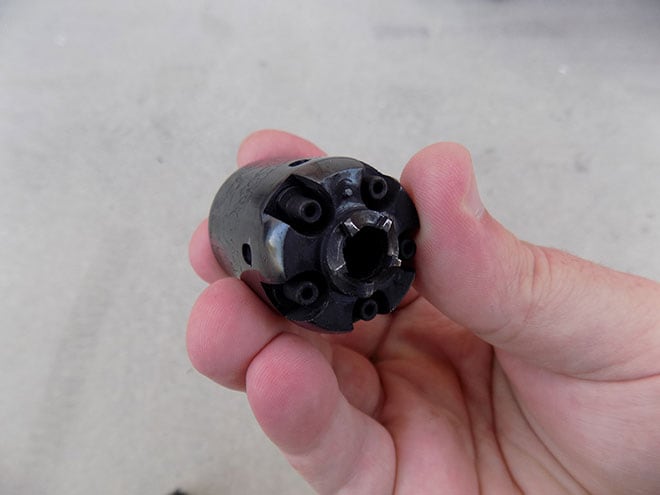 A single safety protrudes from the back of the cylinder.
(Photo: Terril Herbert)

Pour a charge of black powder into each chamber and seat an oversized lead ball. There are a few ways to seat the ball, including using a muzzle-loading short starter or a plastic hammer, but the 19th century way would be to press the ball down using the cylinder arbor on the frame.

At this point, you can elect to smear grease — my personal favorite lubricant is Crisco — over the ball to keep the gun lubricated with repeated firing.

Put percussion caps onto each nipple and reassemble the pistol. Pull the hammer back and let it rest on the safety pin, in between cylinders. With all that work done, you are ready to fire.

Shooting… and a few fixes

In general, replica Colt revolvers suffer from having spent caps fall into the open mechanism when the hammer is re-cocked. This was not a problem on original guns and is solved by a quick stoning to deburr the hammer face. On this revolver, I had to back out the nipples one turn from a snug position to get the gun to set off percussion caps. It appears the stock nipples are a touch too short.

A first attempt with the Baby Dragoon at 7 yards. (Photo: Terril Herbert)

The Colt Baby Dragoon put out by Uberti is a great shooter, though today is it easy to see why it replaced so quickly. At seven yards, holding the bead front sight square in the rear notch, I put five shots into a three-inch group on the very first attempt. I continued to hit the a ½ size steel torso silhouette at fifteen yards.

Compared to larger belt and horse pistols, the Baby Dragoon is very light and quick in the hand. I can reach for the hammer one-handed with ease and speed. The generous hammer checkering helps. The grip is perfectly formed and like the 1851 Navy, and later the Colt Peacemaker — instinctively point-able and comfortable. The grip also absorbs recoil well, not that there is much recoil with such a 31-caliber revolver to begin with.

The sights are period correct,  — in a word — small. However, the gun shoots quite close to the point of aim, only about two inches high. Bearing in mind that, traditionally, percussion revolvers were sighted for long range and will usually print one foot high nominally at close range. 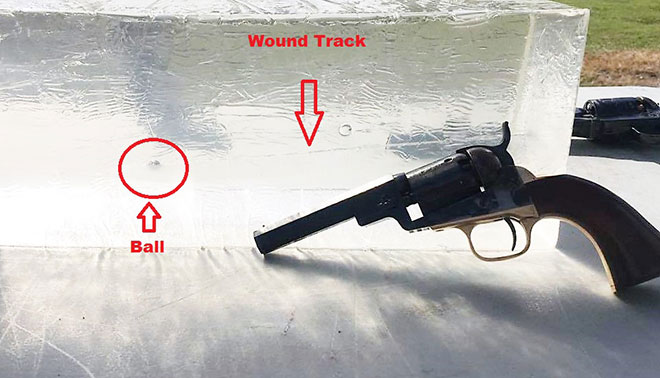 The Baby Dragoon did a surprising job against a block of 10% ordnance gel. (Photo: Terril Herbert)

The load I was using was 15 grains of FFFg Goex black powder and a .323” cast pure lead ball that weighs in at 50 grains. Muzzle velocity on this load runs at about 730 feet per second. That is not a lot of bullet and not a lot of velocity, so how deadly is it?

I tagged a block of 10% calibrated ordinance gel using the same load. To avoid missing the block, I shot the naked block from only one foot away. The ball came to rest eleven inches into the gel, however the wound track extends to the thirteen-inch mark, indicating that the ball bounced back slightly. There was remarkably little damage in the wound track, save for some minor cork screwing. Better results might be achieved, but a charge of 15 grains of powder is getting close to the maximum that will go into the cylinder with room to seat the ball.

Uberti’s Colt Baby Dragoon is perhaps one of my most favorite percussion revolvers to shoot, but the little gun does show in some way why 31 caliber revolvers — so popular in the 19th century — are dead last today. 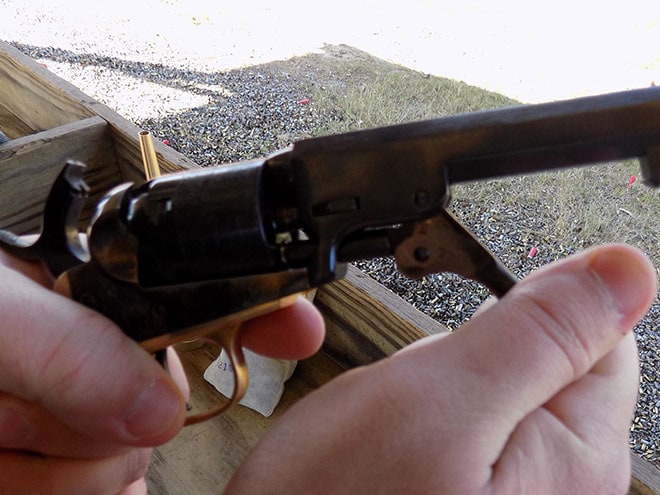 A loading lever means you don’t have to disassemble to reload but small holes are tricky to hit with powder. (Photo: Terril Herbert)

The 31 caliber revolvers are quite small, part of their old appeal, but they are harder to manipulate even with a loading lever under the gun. It might be easier to charge the tiny chambers off the gun. And ammunition for these little gems is a bit off the beaten path. You will not likely find .323” balls at your big box store, but you will more likely find .36 and .44 caliber fodder. Having said that, an easy way to shoot these little guns cheaply and easily is running them with O buckshot, which measures in at .330”. These little guns are powerful for their small size, giving performance in ballistics gel that some might say is just adequate by today’s FBI standard that requires between 12-18 inches of penetration in 10 % gel. Despite the relatively crude sights, the Baby Dragoon is very accurate and the gel performance is perfectly adequate for small game getting, perhaps even working a trap line.  For that kind of performance, you are burning relatively little powder compared to the larger revolvers. So, all things considered the Baby Dragoon and 31 caliber revolvers in general.

Uberti’s Baby Dragoon — while not as convenient as the 1849 Colt or the Remington Pocket 31 caliber revolvers — is surprisingly straightforward to load. You can see exactly what you are doing. The lever-less design shaves a bit of weight and gives a touch more concealment — something we modern shooters could understand. The Baby has a sleek, romantic appearance. The bluing is on point, as is the casehardened frame. The only finishing qualm is the sharpness of the hammer face. But why complain? Uberti’s guns are made from modern steel, infinitively stronger than the original guns. And you don’t have to feel bad about shooting them. At a price point of $300, you get a well finished, attractive, yet functional and accurate handgun that can still get the job done and provide infinitive moments of fun at the firing line. But most of all, when handling the little Baby Dragoon, I got a greater appreciation for how far the carry gun market has come since 1848.