Gun Review: Is Henry Arms .22 lever action the best .22 on the market? 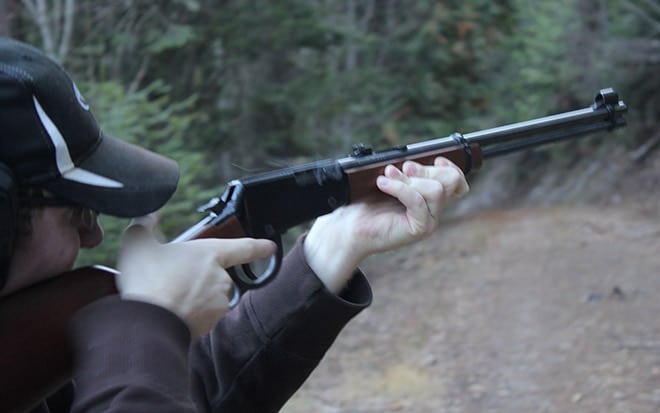 Regardless of whether you’re a traditional lever action fan or not, there’s no denying that the Henry Classic .22 is a beautiful and alluring little rifle.  Inspired by the classic Henry lever action from the 1800s, it’s also perfectly capable of sending a rapid and yet accurate stream of .22s downrange.  Is the Henry the only rimfire rifle you should own?  Probably not, but there’s also no denying that it’s probably the best built of any commercially available .22 today.  It’s also a fun addition to any gun collection. 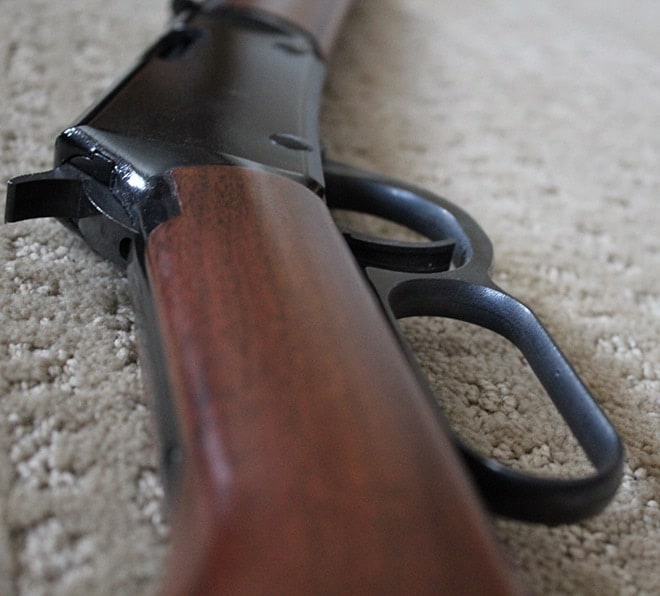 The fit and finish on this gun is simply head-turning (Photo: Nicholas Oetken)

This rifle screams quality. The first thing that stands out about the Henry is the glossy smooth fit, gorgeous blue finish, and deep walnut stock.  It makes the gun a true pleasure to just hold.  Working the hammer and lever are also incredibly smooth with literally no roughness whatsoever.  It’s rare to nonexistent that I encounter a lever action of any make that is as polished or has as agreeable of an action as this one.  Without question, the fit and finish of the Henry .22 gets a solid A+. 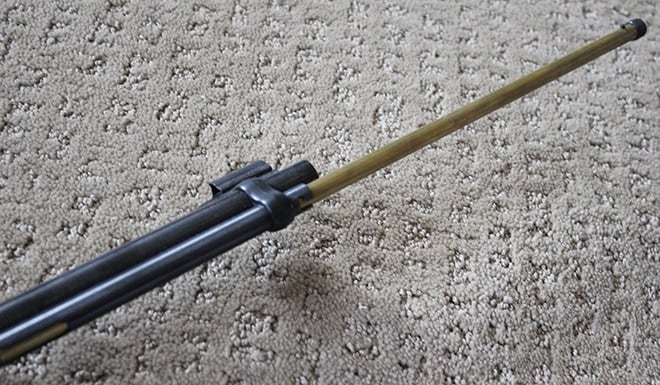 Loading the Henry is a little time consuming (I guess I’m spoiled by simply swapping the 25-round magazines out on my 10/22) but works the same way as the original Henry lever action.  You twist a cap at the end near the muzzle and pull the inner brass tube and spring system out (don’t lose this brass tube because without it you’ll be firing single shots until you can get a replacement). You then drop either fifteen rounds of .22 Long Rifle or twenty one rounds of .22 Short into the magazine tube before placing the inner tube and spring system back in the rifle.  From then on out it’s all fun. 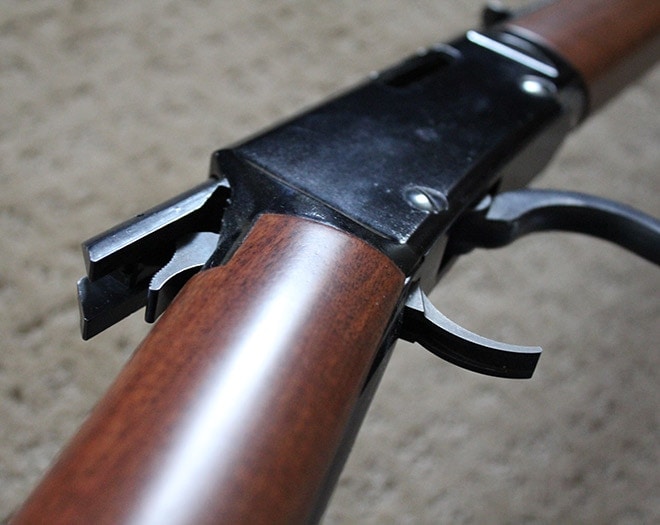 The Henry acts like any ordinary lever action: you rack the lever to chamber a round, the spent shell casings is ejected out of the side of the receiver when the rifle is re-chambered.  Again, I simply cannot emphasize enough how smooth the action is — it really is the main attraction of this weapon for me.  But it’s also very solid and easy to tell when a round has been chambered because you will hear a distinct click every single time. 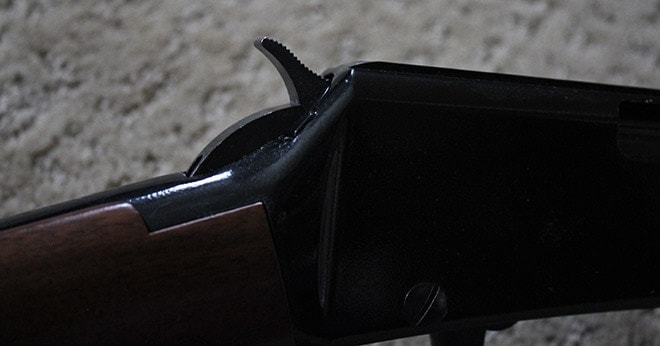 As with many lever actions out there, there is no external safety on the Henry but there is a half-cock position on the hammer.  Always ensure that the hammer is either cocked in this half position or that the lever action is all the way open when re-loading the tube in order to prevent a potential accident.

The smoothness of the fit, finish and operation, however, are not the only things Henry succeeded in with this gun.  The sights are quite impressive by themselves and allow you to really zero in on your target.  Since the sights are both raised and adjustable, it is very easy for me to consistently put rounds at or around the bullseye.

Something else that stands out to me about the Henry .22 is the balance.  The variant I used for my testing was the Classic, 36.5 inches long with a 18.25 inch barrel, and it feels very natural to throw to my shoulder.  While I wouldn’t necessarily classify the weapon as “lightweight,” it would still be effortless to carry around all day if you plan on some squirrel hunting. 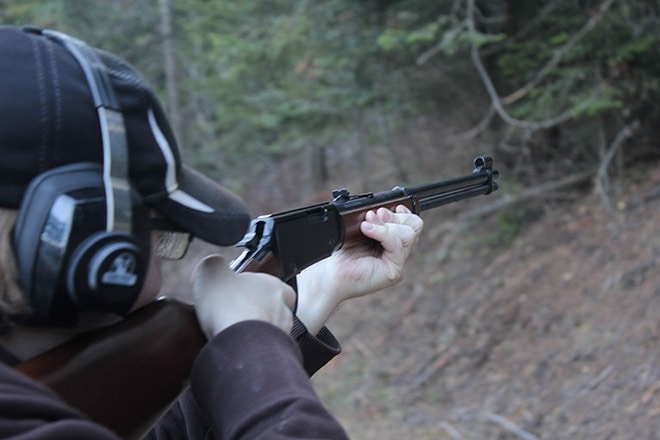 Accuracy with this .22 rifle is superior. (Photo: Nicholas Oetken)

As I expected, reliability through hundreds and hundreds of rounds was perfect  — I experienced absolutely no hiccups with this gun.  Each round is ejected very cleanly but firmly and recoil (this being a .22 of course) is minimal.  The trigger is fluid just like the action and no doubt contributed to the excellent accuracy of the weapon.

On a final note, the price on the Henry .22 is, frankly, unbelievable.  After my thorough assessment of the rifle, I expected a price tag of at least five to six hundred dollars.  Yes, it’s that high quality.  I was shocked when I saw the price tag on these things at most stores was three to four hundred.  And did I mention the Henry Lever Action .22 is entirely American made? 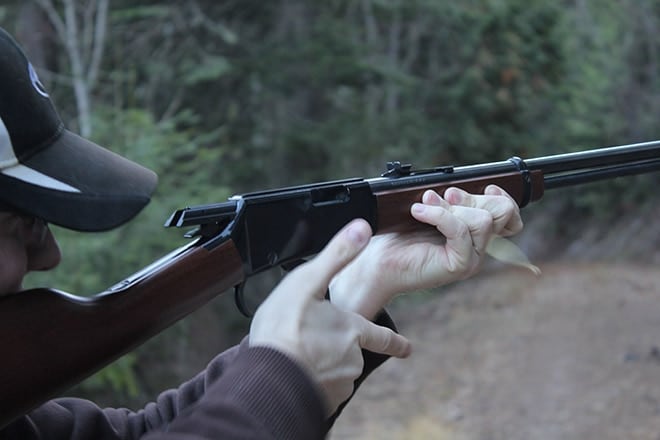 Working the action on the Henry is, in one word, smooth. (Photo: Nicholas Oetken)

Overall, I simply can’t say enough good things about the Henry .22 — and I’m not alone.  It’s an admirable and entertaining little rifle that is incredibly well balanced, produces exceptional accuracy, and can rightfully boast of what is easily the smoothest action you could ever ask for in any lever gun.

I do concede that, when it comes down to it, the Henry is still what it is: a lever action rifle.  If you’re not a fan of the lever action design in general, this definitely isn’t going to be the .22 rifle for you if you could have only one. I still prefer my Ruger 10/22 (or even the Marlin Model 60s I’ve also used extensively), but the Henry .22 is a pleasant break from the semi-autos and a gun I would love to say I have in my collection.  Is it the best .22 caliber gun on the market today?  I think you could at least make that argument.