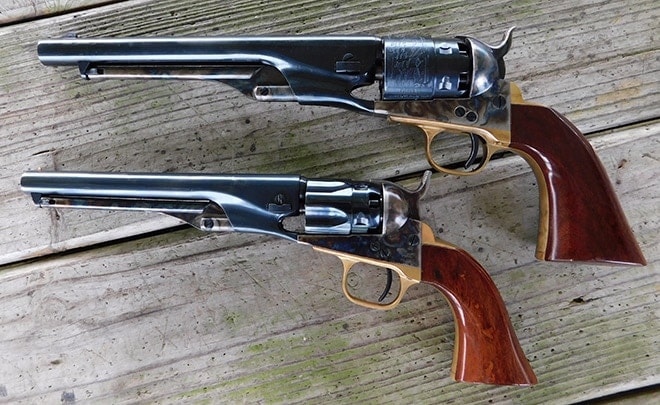 Pocket percussion revolvers and I have had a long “on again, off again” relationship, which first started when I got my hands on a Remington 1863 Pocket in 31 caliber. That gun was followed up years later by the better known 1849 Colt and Baby Dragoon. Produced by both Pietta and Uberti, these fine handguns are proof that, when it came to mid 19th century every day carry, folks didn’t necessarily want to pack boat anchors on their hips. But there was one other classic pocket revolver I had yet to touch, the Colt 1862 Police.

A bit of background

Once the Baby Dragoon came out in 1848, Colt Pocket revolvers became the mainstay of small, repeating handguns. These 31 caliber revolvers didn’t have the punch of the heavy 44 caliber guns, but they were small in size and performance deemed adequate for defense applications. The 1849 Colt would go on to become the company’s most popular revolver of that century. It should come as no surprise then that when police departments in the US finally started issuing firearms to deputies, they reached for the 1849 and the little five-shooters served quite well.

But by the dawn of the Civil War, Samuel Colt decided there was a need to modernize his line of percussion revolvers. The most important improvements made were the elimination of the expensive-to-make octagonal barrel and the introduction of new steel in the manufacturing process. The new guns were less expensive to produce, yet infinitely stronger, being made of silver steel. The first in the new line was the Colt 1860 Army. 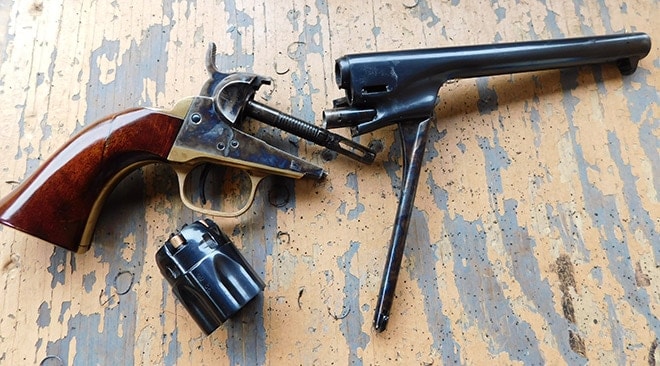 The 1862 comes apart like any other Colt, tap out the barrel wedge and pull the gun apart. Cleaning is easy and on the range, there is nothing safer than fully disassembled. (Photo: Terril Herbert)

A slightly smaller version of the Army in .36 caliber was adopted by the US Navy in 1861. That same year, an improved version of the Colt 1849 was introduced. It was still small and still a five-shot gun, but it packed 36 caliber killing power. The new gun was intended for the civilian market and for the New York Metropolitan Police, who wanted a bit more power than what the little 31 caliber 1849 could offer.

As it turns out, what would be called the Navy and Police revolvers were the last that Sam Colt lived to see entering the market as he died in January 1862. As for the Police revolver itself, less than 20,000 were produced before production gave way to cartridge guns in 1873.

Fortunately, Uberti is making a good replica of this neat handgun today. 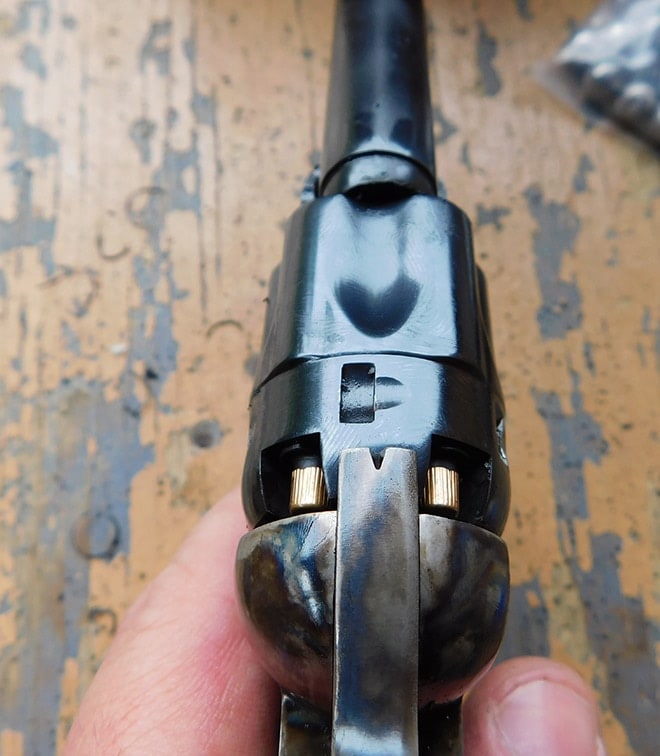 The hammer lying on a safety pin, between chambers. (Photo: Terril Herbert)

I admit that I avoided the 1860-62 series of handguns for a long time because I thought the previous generation of Colt handguns were better looking. But when I got a Uberti 1862 Police from Taylor’s & Co., I was impressed by the revolver’s handiness and handsomeness. It weighs in at just over a pound and sports a 6.5 inch barrel. The gun, then as now, is offered in a few different barrel lengths. Though a bit lengthy, the handgun feels somewhat delicate.

Like the 1849, the walnut grips provide a full grip, yet are slim in profile as is the frame, another feature borrowed from the 1849. The cylinder is fluted in a quite modern fashion and features safety pins in between each of the five cylinders. The gun is blued in finish but the case-hardened loading lever sticks out with its newer rack and pinion design coupled with the round barrel. What isn’t new are the terrible sights, a bead front sight and a notch cut in the hammer face.

The gun’s claim to fame is that it takes the same ammunition as the 36 caliber Navy revolver, but weighs about half. This aside, it is still a single action revolver that loads and functions the same way as any other cap and ball revolver. 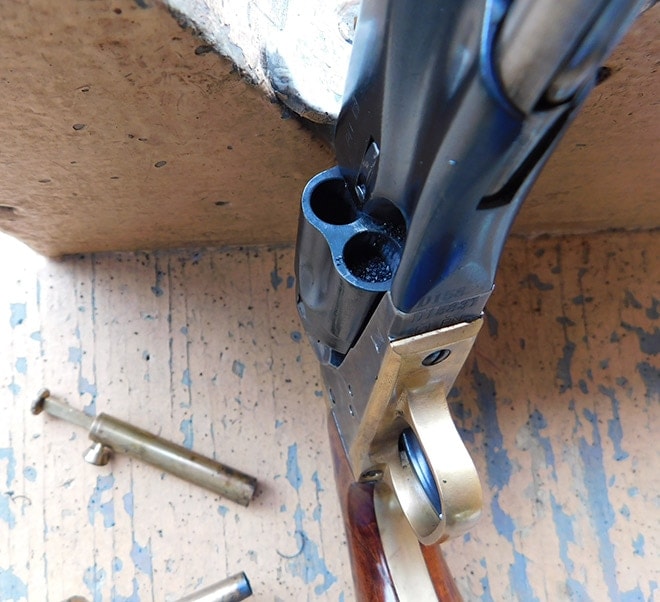 The 1862, like any other revolver of the era, loads from the front end of the cylinder. (Photo: Terril Herbert)

Uberti’s 1862 Police being a 36 caliber handgun means it will nominally use a .375 inch diameter projectile, be it a 80 grain ball or a 130 grain or higher conical bullet. During the American Civil War, an average 36 caliber cartridge used a 140 grain bullet and a 20 grain charge of fine shooting powder. In its time, the 36 was leaps and bounds more effective than the 31 caliber rounds that dominated pocket revolvers, yet had lower recoil and was generally more economical to shoot than the larger 44 caliber Army style revolvers. The 36 was the perfect choice for the Navy at the time, as they had less concern with shooting and killing horses.

On the range, I used a cast .380 inch ball and a cast Lee 130 grain conical bullet that I used in my ballistics gel testing. For fuel, my favorite Graf & Son’s FFFg black powder. Remington No. 10 caps functioned as primer and good, cheap Crisco functioned as lube.

I got on the range with all my gear in tow quite excited, given I hadn’t touched off a 36 caliber gun in a while.

As with any percussion revolver shooting session, I slid some percussion caps over each nipple and fired them off. This is to clear the chambers and the nipples of any grease that might inhibit ignition.

Once that was done, I proceeded to load, which was a bit of a challenge. On this pocket sized handgun, it was harder to get a paper cartridge or powder measure squarely onto the small chambers. It took more time than on a larger belt size .44 caliber 1860 Army. Seating the conical bullets required me to start them into the chamber mouth before the cylinder could be rotated under the loading lever. Lead balls were easy to pop on the chamber for seating. 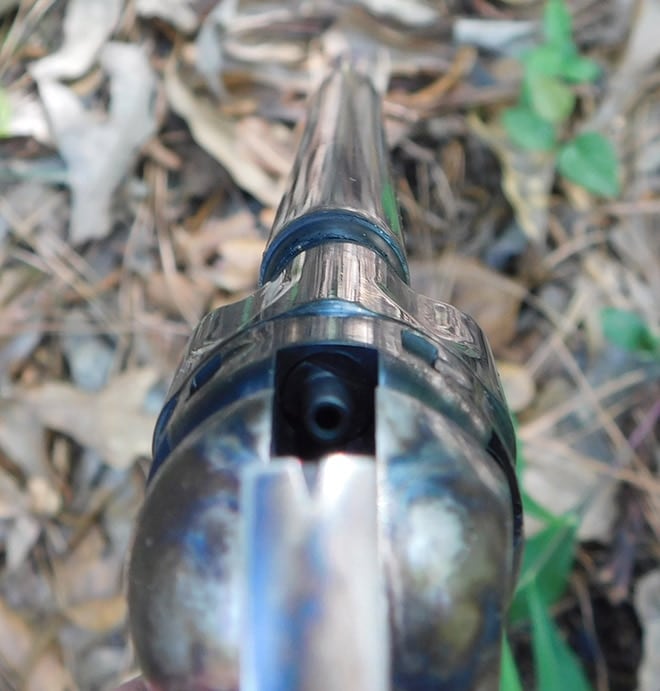 The sights consist of a crude notch in the hammer face and a front bead that isn’t so easy to see. Crude, but fine. You won’t cover up a target with these sights. (Photo: Terril Herbert)

Next, unlatch the loading lever and push the bullet into each chamber. If you feel a crunching of compressed powder, you will know you got it right. It is here, I should point out, that 20 grains is certainly a maximum charge with a conical bullet as I had to press down harder to seat them so they wouldn’t bind up the cylinder when it rotates. An extra five grains could be put under a shorter, lead ball.

With all the cylinders charged, it is wise to put a bit of grease over the bullet to keep the black powder gunk in the action and the action soft and pliable to keep the gun working longer.  Crisco saves the day and works as well as anything else. Afterwards, place percussion caps on each nipple.

The creeping, rack and pinion loading lever is very responsive even with those stubborn conical loads. (Photo: Terril Herbert)

Shooting the 1862 is accomplished by cocking the hammer for each shot, which exposes the crude rear sight notch in the hammer face that interfaces with the brass bead front sight. The trigger pull is quite light, at just over three pounds with an ever so slight amount of take-up before it breaks. After the column of smoke and flame evaporates with each shot, I was not surprised at all that I didn’t hit where I was aiming. This handgun shot a fair six inches high at seven yards.

Unfortunately, I had an awful time getting good groups because of the distraction of cap jams, in which spent caps were getting pulled off the nipple by the hammer and being dropped into the action, either stopping the gun from firing or binding the action. This has much to do with these replicas having rather sharp hammer faces. The trick is to carefully break off those sharp edges with a stone. Sure enough with that quick, non-invasive solution, the cap jamming went away and I was free to keep trucking along. 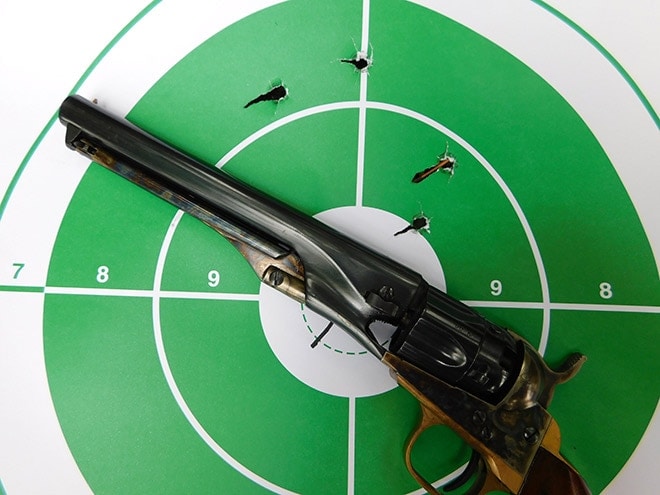 The power of an 80 grain ball over 20 grains of powder might not be so impressive by today’s standards, but the 1862 does shoot them quite well. (Photo: Terril Herbert)

As with any Colt replica, the 1862 was largely unaffected by the caking of black powder gunk after repeated firing. It was easy to go for over fifty shots without any remediation. As for recoil, it was a gentle push—only slightly more than a 22 rimfire pistol—but with considerably more boom.

Big boom, yes, but what is the bite of the 36? Here are some numbers I collected while shooting over my chronograph at ten feet:

How about accuracy? My best, one handed effort landed me with a 2.5 inch group at seven yards distance. Not bad, but that little gun sways easily and the grip, though long enough, was slim and my large hands surely put too much meat on the trigger.

Uberti is making a fine replica of what truly as one of the more obscure handguns of the early Colt era. Much finishing work and detail has been done at the price tag, which can vary between $300-360. The gun functions well after a quick stone treatment. Though I think myself to be more accurate with a larger 1851 Navy revolver, the accuracy is acceptable despite being a bit awkward to load — it takes a bit of time to get a perfect grip on this sleek rascal of a gun.

Overall, the 1862 Colt Pocket Police revolvers, despite not being made in huge numbers, certainly deserves a bit more notoriety. Quite a few were dragged off to war, owing to its small size and the use of standard supplied ammunition. It was efficient, like the 1860 Army, in increasing the power of the handgun while allowing the gun to be smaller, stronger, and more manageable. The 1862 was Sam Colt’s very last design and it marked his attitude toward constant innovation that was carried on by his workers in the decades after the war.