Gun Review: The Smith & Wesson 43C — the snubbie you never heard of 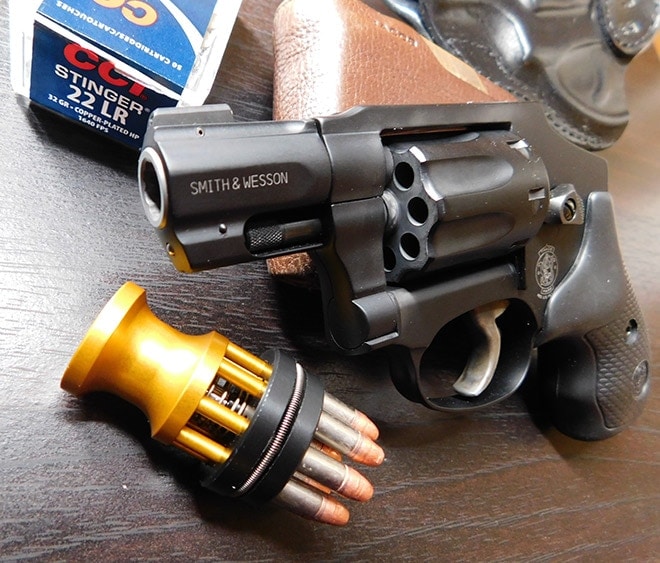 In the world of defensive revolvers, Smith & Wesson makes what can be considered the very best. For over 60 years now their small “J frame” short-barreled revolvers have been a gold standard for police and civilians alike. Though compact automatics have come a long way, boasting more capacity and reliability that is arguably just as good as any revolver, the J frame is still as solid as ever with advantages unto itself.

The variety in Smith & Wesson’s catalog has only increased throughout the years from the little all steel Model 36 and 60 to the latest alloy framed lightweights like the 637 and 642. Most of Smith’s J-frames are either in 38 Special or 357 Magnum—which can be quite a handful to shoot. With that in mind, I decided to seek out a Smith snubbie at the bottom floor of the caliber world. What I came up with was a Model 43C in 22 LR.

A pistol that doesn’t belong

When I first laid eyes on a factory new 43C, it looked like a typical 38 Special revolver, except it isn’t, because that aluminum cylinder holds eight rounds of 22 LR. With the 38 Special Airweights ubiquitous, the 43c isn’t the most common bird on the perch. This is not because Smith lacks a variety — their 22 Magnum revolvers tend to fly under the radar as well. It is somewhat odd however that the 22 LR — a great woodsman’s cartridge — gets stuck in a platform designed expressly for self-defense and concealed carry.

With a loaded weight of 11.5 ounces, a barrel under 2 inches in length and a concealed hammer, the 43C never struck me in the traditional 22 LR way. It isn’t a target pistol nor does it fit the lines of a gun ordinarily carried by a woodsman or a hiker. To me, this is still meant to be seen as a lightweight and low recoil self-defense option. 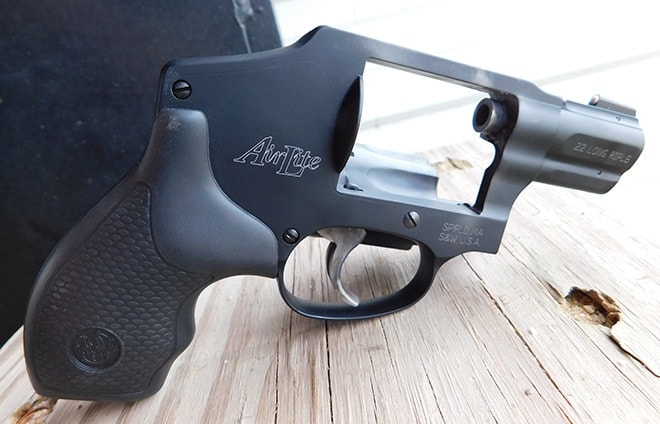 The 43C is part of Smith & Wesson’s Airlite Series. That is a bit of false advertising. At 11.5 ounces, the 43C is heavier than air. (Photo: Terril Herbert)

When I picked up the 43C, the first thing I noticed was just how light it is. It felt like potato chip weight — okay maybe not that light. But 11.5 ounces is lighter than just about any 38 Special snub-nose you are apt to find. Even the Ruger LCR with its polymer grip frame is not this light.

Make no mistake, all the important parts are still made of steel. The internals, the lockup system, the ejector rod and crane, as well as the thick barrel are all steel in construction. Unlike a lot of other small revolvers, the 43C has a fully shrouded ejector rod and an XS white dot front sight to mate against the milled notch in the top strap that serves as a rear sight.  Mechanically, the 43c is a double action only revolver with a concealed hammer that cannot be manually thumbed back. A long pull of the trigger is the only way to fire the gun.

Being a J-framed revolver, it can use any grip, holster, or laser that will fit the 43’s bigger caliber brothers. 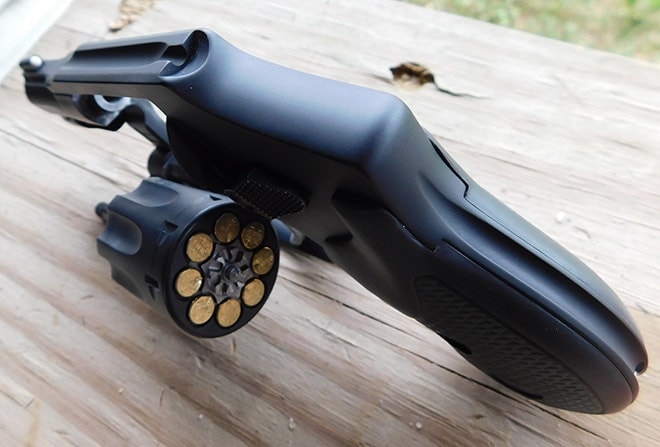 You won’t find milling grooves on most S&W revolvers, but it gives the 43C a sleek, unique look, while also reducing weight on non-essential parts. (Photo: Terril Herbert)

I tend to shoot snub-nosed revolvers rather well and I was sure a 22 caliber snubbie would give me no issues with accuracy. But accuracy is only one facet of a self-defense firearm. Outside of ammo availability and accessories, reliability, recoil control, and user-friendliness are paramount.

I collected a sampling of 22 LR ammunition to test including more match grade oriented Federal Match and Federal HV Match, both of which use a 40 grain lead bullet. I also obtained CCI Stinger 32 grain hollow-points, one of the offerings at the high end of power — for 22 LR.

Most of my 400 round test consisted of shooting at 7 yards, a typical defensive distance. Like any other Smith & Wesson J-Frame, the 43c is simple to operate. Push the cylinder release forward and push the cylinder out and you are ready to load.

However, instead of five big 38 caliber holes, you have eight .22 caliber holes. Loading the small cartridges into those small chambers felt more awkward and slow with my sausage fingers. 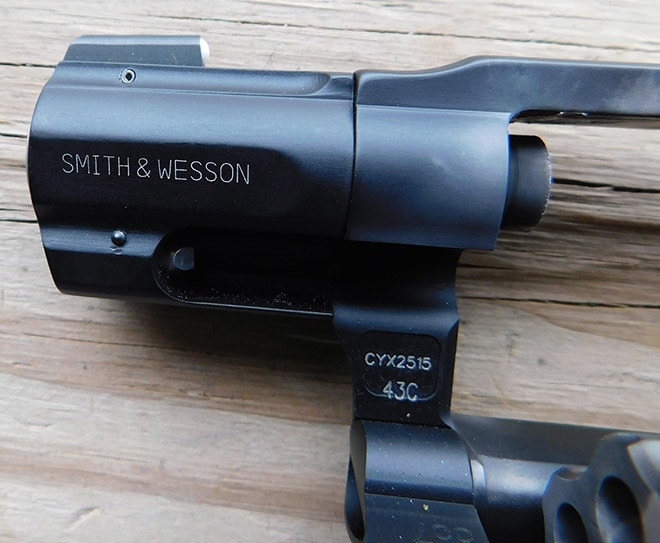 The barrel is only 1.875 inches long, but you can get 1000+ feet per second velocities out of this little pistol. (Photo: Terril Herbert)

Thankfully, there are a few good options available for speed reloading. I used Speedbeez 317 S&W speedloaders to reload. Simply open the cylinder, kick the empties out, push in the loader, and hit the nob. Quick and simple, about as fast as changing a magazine in an auto pistol. In any case, the chambers are filled and you are back in action.

Once that is done, close the cylinder. All that is left to do is fire. Since there is no exposed hammer, the only way to fire the pistol is by pulling the trigger all the way through.  This rotates the cylinder and drops the hammer on a fresh cartridge.

In the hand, the pistol is simply too light. The thin, rubber grips are perfect for concealment and you can get your hand on most of the grip, but your pinky finger will likely hang off the bottom, like on many carry-type guns. Whether you are shooting one handed or two handed, the 43c is more comfortably than your average snub-nose, likely due to the better than average sights and the lack of blast and recoil of the 22 LR round. 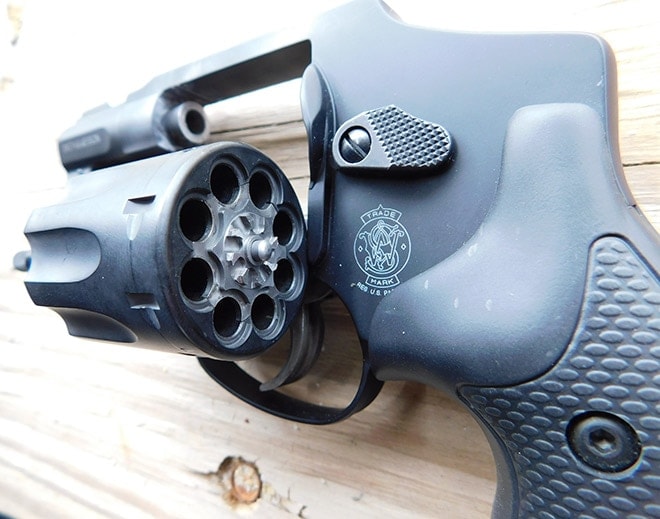 The lightweight aluminum cylinder on the 43C would likely heat up with prolonged firing compared to a steel cylinder, but no problems arose during the test. (Photo: Terril Herbert)

A long pull of the trigger discharges the pistol with a loud pop and a puff of smoke which is bullet lube burning in the air. There was virtually no recoil on most loads except the CCI Stinger loads. These loads flamed brilliantly with every shot and the pistol jumped back a minuscule amount when shooting one handed.

Recoil was underwhelming, as was the accuracy… sorta. At 7 yards, I reliably clustered each type of ammunition into a 2 inch group. It was easy to do, but the group always rested a few inches lower than the point of aim. But it was close, and quite accurate for social work.

The pistol was 100 percent reliable with each ammunition tried, though I never bothered with bulk pack offerings which might offer a few duds. The heavy hammer spring in the 43C is there to smack those rimfire cartridges hard enough to set them off, but that does mean a heavier double action trigger pull than what might be found on a standard centerfire revolver.

At 25 yards, a less than optimistic distance for a small handgun, I could still get eight rounds into a 6 inch pattern.  The gun’s light weight amplifies my shake when holding onto a target at that distance, but the front sight kept me on target with each trigger squeeze. 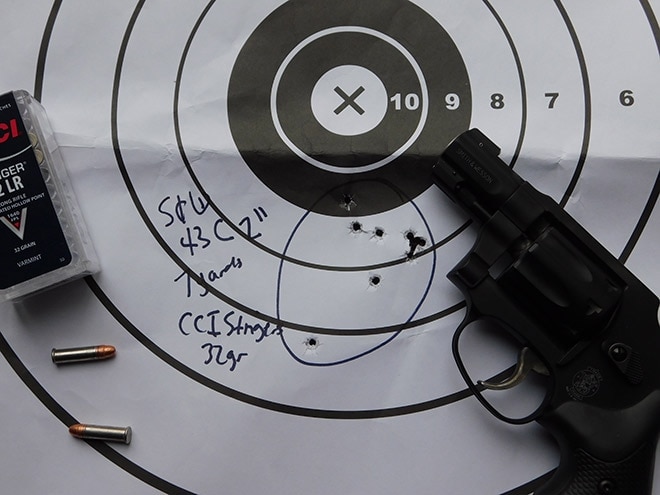 For a small revolver, the 43c groups formidably with a typical 2 inch group at 7 yards. This is slightly below the point of aim, however. (Photo: Terril Herbert)

Because the only way to fire the gun is double action, I fought a long, heavy trigger pull every shot, but it isn’t much of a fight at just over 10 pounds.  Trigger pull is smooth with no grit as the trigger is pulled back and the release is always a crisp surprise. This allowed me to take up the slack quickly and get off fast follow-up shots — important for self-defense and especially important with a 22 LR pistol, where each individual shot doesn’t have much power. But just how much power?

I fired my test ammunition over my Caldwell Chronograph at 10 feet and here is what I found*:

*Results taken in three shot averages and in feet per second.

There is nothing wrong with a snub-nosed 38 Special or a micro-380, but sometimes less is more. The Model 43C surely suffers from a lack of notoriety, being less common and about $100 more expensive than a J-frame 38, but that doesn’t rule it out as a viable option for protection. In fact, the 43C has some benefits that are worth noting that will make it far better than a more powerful gun.

That CCI Stinger round will generate about 72 foot pounds of energy at the muzzle, which is not impressive at all—just higher than 25 ACP in power. It is also rimfire, less reliable and dirtier than central primed ammo. 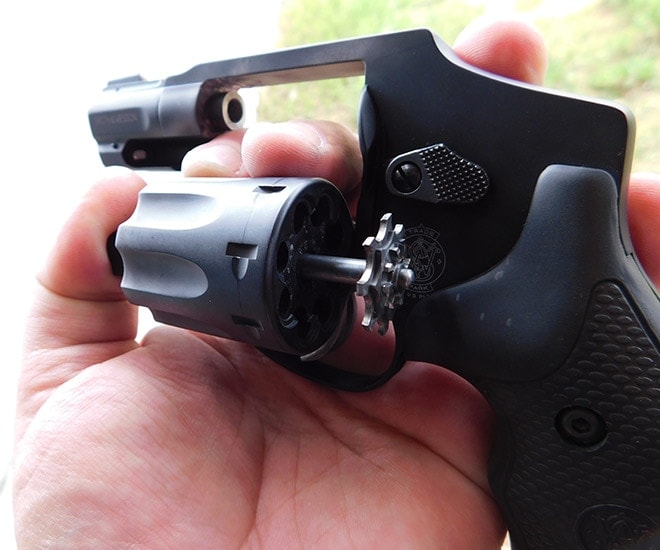 The 43C is a typical hand ejector revolver with a typical short ejector rod found on snub-nosed handguns, however ejection of the empty cases was never sticky. (Photo: Terril Herbert)

But in the 43c, this is livable. Outwardly, the 43c adapts itself well to concealed carry with its light weight construction and hammerless design, which prevents snagging on the draw. You get a healthy eight shot capacity with some good speed reloading options available. And with a revolver, you can simply skip a dud round.

The 43C has a simple manual of arms when it comes to loading and operation, though that double action only trigger will take some getting used to. Getting used to the stiffer trigger is made easier because of the 22 LR’s low cost and low recoil, which makes practice more enticing. Practice makes for good hits where they count and in serious matters, only good hits count.