Yankee Hill Machine is best known for its array of AR-15 accessories. From suppressors to handguards, lowers to uppers the company continually rolls out new digs to make AR-15s even more fun to plink with. YHM was kind enough to send me a long gun, custom built to highlight some of the company’s more popular AR-15 upgrades. How did she perform? Let’s find out.

What’s on it?
First let’s get down to the nitty gritty details. The 5.56 chambered rifle features a smattering of YHM branded goodies designed to elevate the performance of the AR platform. At the crux of the build is a forged 7075-T6 aluminum YHM Lower Receiver paired with the company’s Flat Top Upper Receiver. 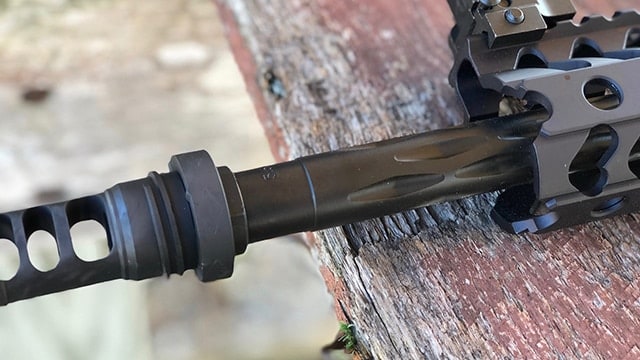 The YHM rifle features a 1:9 twist barrel made of 4140 steel (Photo: Jacki Billings)

Internally, the rifle sports a YHM-49-TF free-float 16-inch barrel. The 1:9 twist barrel, constructed out of 4140 steel, offers a diamond flute that YHM says improves rigidity while reducing weight and helping cool down the barrel. The rifle is also equipped with a YHM Low Profile Gas Block designed to ease recoil and reduce wear and tear.

Externally, YHM continues its dominance over the build, outfitting the AR with a YHM-5405A Barricade Hand Stop, YHM-5402A Forward Grip with storage, and YHM-5295 M-LOK Competition Handguard. Topping off the build and rounding out the YHM 5.56 is a YHM-5M2-QD Quick Detach Muzzle Brake and standard M4 telescoping buttstock. 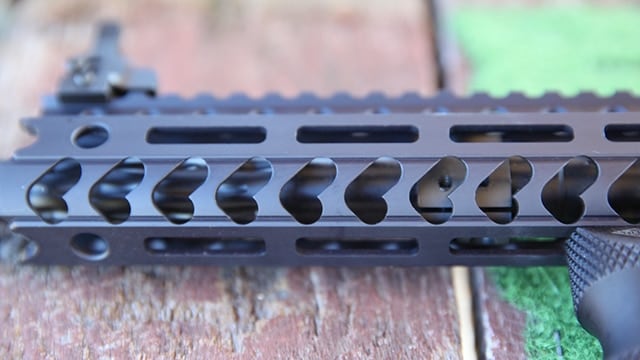 The star of the show was undoubtedly the YHM M-LOK handguard. Constructed from 6061-T6 aluminum, the handguard measures 15-inches in length and tips scales at 11.36-ounces. Featuring M-LOK mounting points at the 3, 6 and 9-o’clock positions, the YHM handguard is a free-floating design that boasts a hardcoat anodized matte black finish. 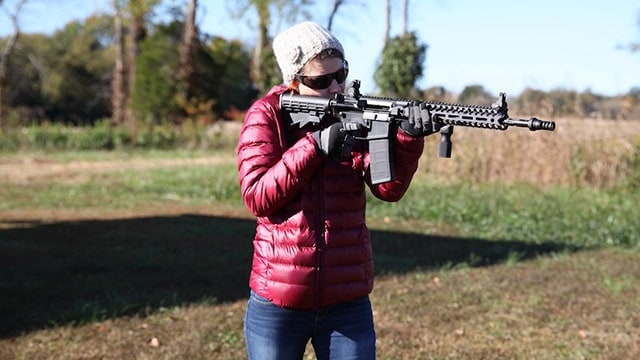 Despite the Forward Grip, the author felt it more comfortable to hold the gun in a more traditional manner. (Photo: Jacki Billings)

Shooting while standing
I rolled up to my local range with the YHM rifle tucked in the trunk of my SUV. Neatly packed into the nice hardcase provided by YHM, the rifle was ready to show me what she had on the range.

Being of the micro warrior size, aka petite, I preferred to rest the rifle on my range bag to achieve greater stability while shooting. Though not overly hefty, shooters with smaller arms it may get a little shaky the longer you hold. Now YHM has equipped the M-LOK compatible handguard with a nifty forward grip. The idea is to give you something to hold onto while pew-pewing downrange. While I think it definitely looks cool and would be a bonus for those with longer arms, for my small frame it just didn’t work out. Though I tried it out several times, I found my arms got tired quicker than if I just held the handguard in the usual manner. 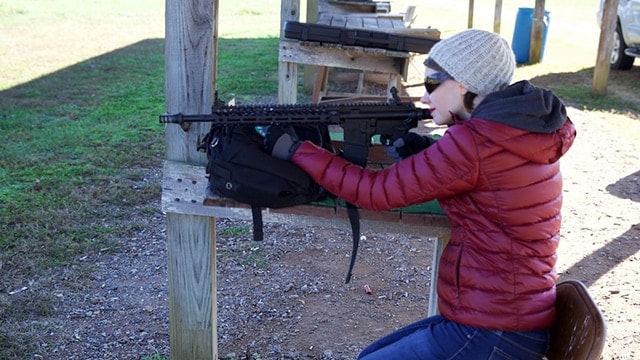 The Forward Grip was useful when shooting the long gun off the range bag. (Photo: Jacki Billings)

Though standing and shooting with the Forward Grip was more challenging for me, I found that I preferred the grip while shooting in a resting position. It was nice to have that grip to grasp when I was leaning more aggressively shooting from the table or even while lying prone. The rifle does benefit from a M4 telescoping buttstock. As a petite shooter, I greatly appreciated the ability to adjust as needed. Fully expanded, the buttstock was way too big for my 5’2” frame, but fully collapsed it was a tad too short. I found one click out was my sweet spot and the most comfortable shooting position. 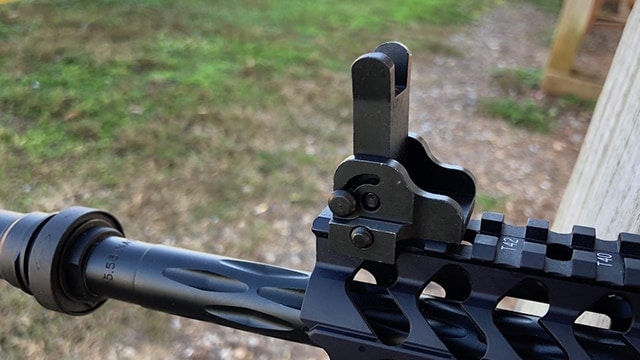 Tackling targets
I chose to shoot the rifle with the included flip-up sights. While shooting targets, I did notice I tended to stray right—though my groupings were fairly tight. I adjusted and tried again, this time setting up some water bottles. Apparently my adjustments worked as I saw no difference in my ability to hit water bottles at 25 yards compared to my previous rifle range day with the Springfield Saint. 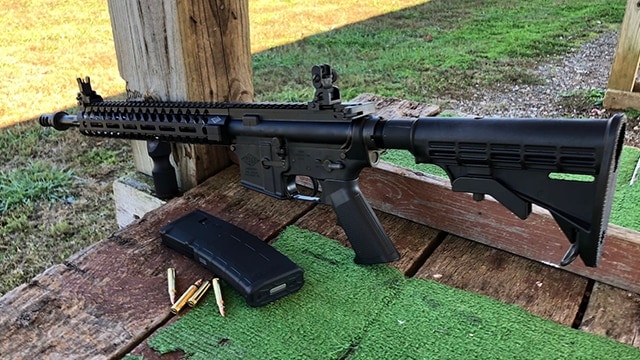 The YHM build is chambered in 5.56 NATO. (Photo: Jacki Billings)

I brought with me a variety of ammunition to test out the rifle’s operations. The first thing I noticed was that she ate through them with little interruptions. From white box to premium, the YHM rifle tackled targets with no stoppages. The YHM happily tossed 5.56 rounds downrange, splintering the full water bottles and lovingly spraying H2O all over my camera and gear.

As far as recoil was concerned…what recoil? The rifle was very easy to shoulder and therefore very easy to manage. After spitting out several hundred rounds of ammunition over the course of a few hours, I was no worse for wear. No sore shoulders here.

Final thoughts
The YHM rifle adequately achieved its intended goal – to showcase the company’s AR-15 goodies. While the Forward Grip only really worked in the resting set-up for me, I feel sure those with longer limbs will appreciate the extra gripping surface. The M4 Telescoping stock paired and flip-up sights were the real winners in my opinion. Offering a fun and carefree day at the range, YHM’s AR-15 build was a pleasure to plink with. 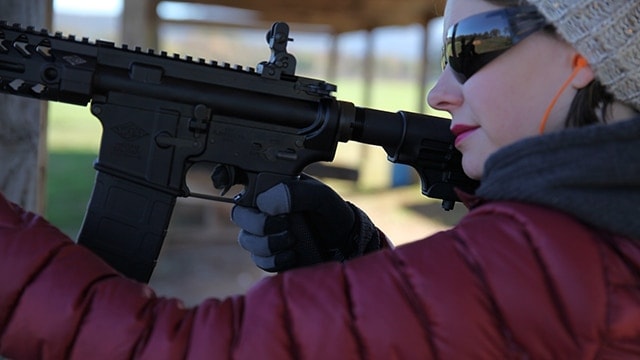