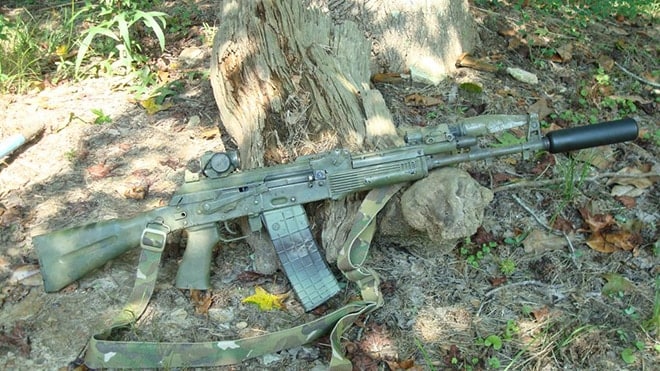 The Arsenal SLR-106FR set up as a practical AKM for shooting competition, complete with suppressor. (Photo: Kenny Hatten)

The long-standing myth about the poor accuracy of AKM variants has circulated amongst gun owners to the point that it has almost become institutional knowledge—something even known to folks who don’t shoot. The culprits, as I see it, have been the journalists, movie makers and even some knowledgeable firearms enthusiasts who have accepted and propagated this myth as the truth for so long that no one dares even question its veracity.  Well, almost no one.

A friend of mine, John Locke, who is also an avid competitive shooter, has used a tricked out Arsenal SLR-106FR in 5.56mm NATO for quite a while now.  His was the first AKM variant that I ever saw in use at multigun shooting events. He did quite well at these matches, so I had to ask him about some of the reasons why he chose to go with the AKM over the AR15. 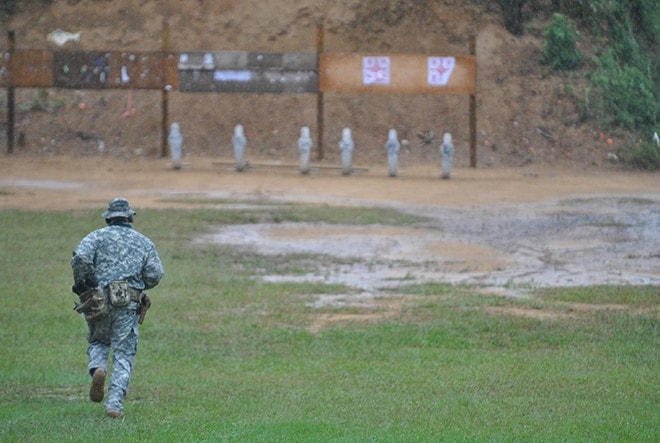 “Early on I bought into the myth that the AR15 was unreliable,” said John. “I spent hours poring over forum posts and reading articles about other 5.56 firearms searching for one that ‘solved’ the AR15’s problems.

When Arsenal USA came out with the SLR-106FR, I knew I had to have it. I loved the AK-74M look married to the 5.56 and the high praise that was then being showered on the AK-74’s muzzle brake.”

After winning a couple of matches with the SLR-106FR, he had the opportunity to compare it with the AR15 and other weapons used in competition. From the beginning, he noticed a few significant differences along the way. 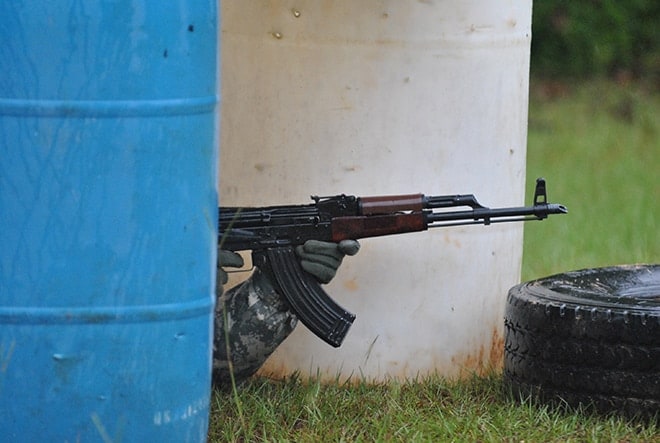 Rocking and locking the AK magazine takes plenty of practice if you want to get it done fast. (Photo: Kenny Hatten)

“I found that the magazine change took more practice to execute quickly than with an AR15, so I practiced that and improved, though I found it was still slower than an AR could be with the same amount of practice,” he said.

One of the biggest and most noticeable differences was operation of the safety lever of the AKM compared to the selector switch on the AR15, but a simple modification helped take care of most of the issues associated with it.

“I found that no method of manipulating the AK safety was as swift and reliable as working the safety on an AR,” he said, “so I tried Krebs Enhanced AK selector, which I found worked every bit as fast as an AR safety and had the advantage of allowing the user to hold the safety in position with the trigger finger during magazine changes, eliminating the occasional tendency of the safety to get bumped up and prevent charging the bolt handle during a reload.” 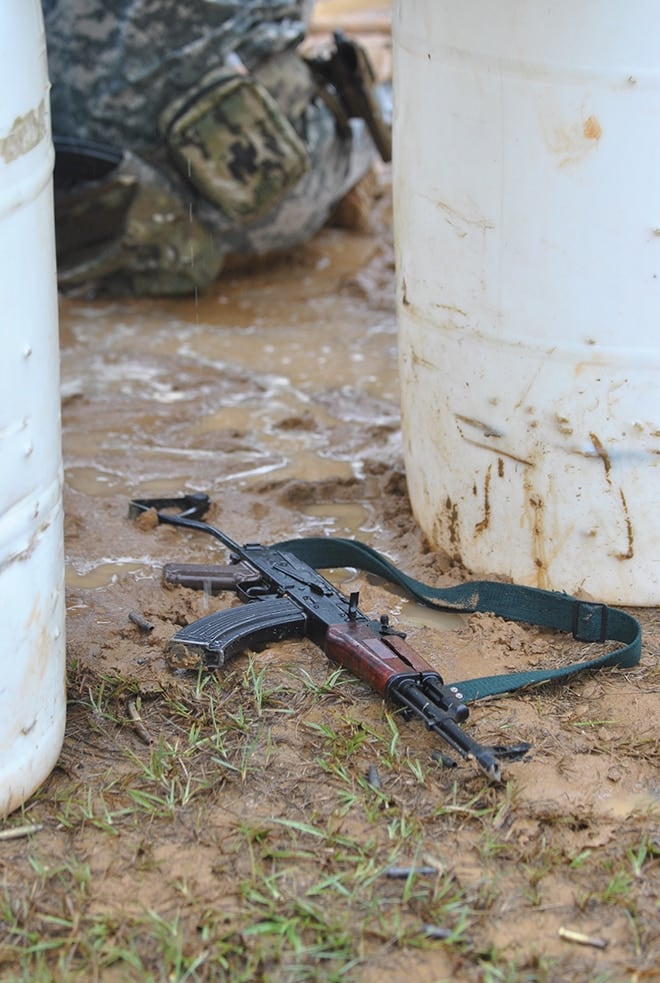 One technique to get the AK in action quickly is to reach under the weapon to operate the charging handle. (Photo: Kenny Hatten)

As he shot the rifle more and more, John noticed other issues, and searched for solutions and modifications to alleviate them.

“Using AK iron sights under time pressure, I found my hits on target often strung vertically while those shot with rifles using aperture sights didn’t,” he said. “I tried a Krebs replacement rear sight which eliminated my vertical stringing, but was still inferior to true aperture sights for distance shooting. I managed to find a discontinued Aimpoint Micro R-1 and Texas Weapons Systems mount for it and found that red dot optics were superior to AK irons, both up close when shooting on the move and on targets at distances out to 300 yards.”

Other modifications included an UltiMAK rail with Vltor Low Profile Offset Mount sporting a Surefire G2, Vickers sling and a shade for the weapon light made from duct tape, which helps keep the front sight from reflecting too much light back into the shooter’s eyes. All this added up to a bit of weight on a rifle that was already heavier than a similar AR15, but it got good results, which is what counts. 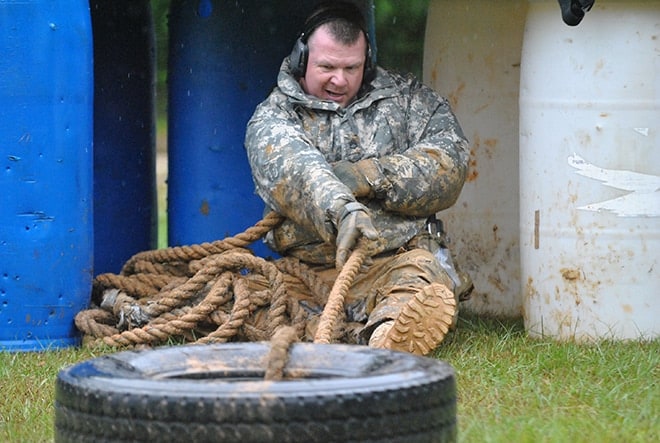 “AKM and AK-74 clones are slightly heavier than AR15s and more importantly, much more front heavy,” said John. “Keeping weight as low as possible by using only as many rails and accessories as necessary, the lightest and most minimal of those you can afford, and mounting the optic as far rearward as practical are all recommended if you’ll be carrying and using the rifle for any longer than a few minutes, otherwise arm fatigue will quickly reduce your performance.”

Going with an AKM variant over an AR for competition can make for a tough time at the matches, but some shooters tend to think of this along the lines of adding a handicap to an already challenging game – the extra effort is good training, and makes the challenge worth it when you can take home a win against shooters with “better” rifles and gear. 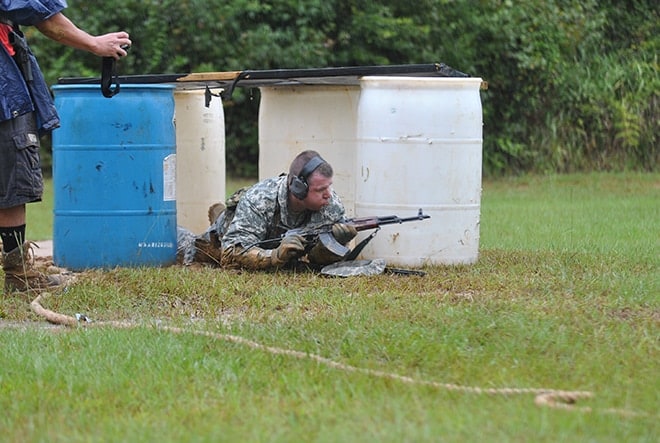 Engaging targets with the SLR-106FR is a lot easier with the Aimpoint Micro R-1. (Photo: Kenny Hatten)

“Having competed and won with both, I found that the only competition related advantages the AK has over the AR15 were front end weight helping with rapid fire, parts life, and perhaps ease of clearing malfunctions,” said John. “I competed with my SLR-106FR simply because I preferred the feel of it the way a man might prefer driving his Toyota Hilux over his Porsche 911.”

Using an AKM variant for competition isn’t something you see very often, but with the increasing popularity of these great rifles, coupled with the plethora of new accessories and modifications available for them, it may come to pass that we’ll see more of these rifles appearing in matches around the country. The more the merrier!