Birdshot vs Buckshot: Why birdshot is never better for home defense 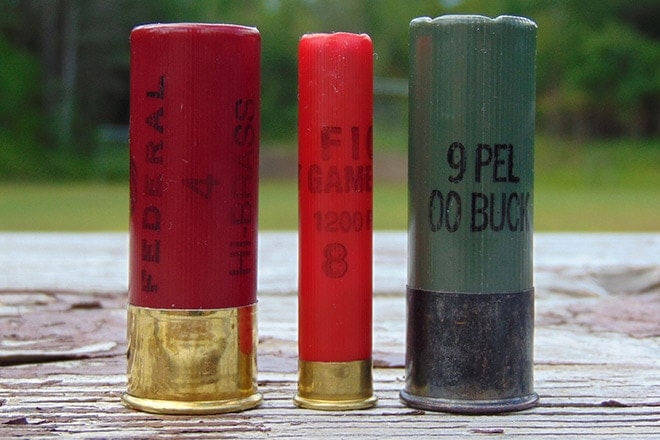 Collection of shotgun shells: Federal #4 buckshot, left, Fiocchi #8 birdshot, middle, Remington 00 buckshot, right. Though the debate between buckshot and birdshot as a defense round has raged for decades, truth is there really isn’t much to debate… (Photo: David LaPell)

There is a debate among defense shooters that is as old as the bickering over 9mm versus .45 ACP and as contentious as the sparring over the 1911 or the Glock. It is, which is better for your defensive shotgun, birdshot or buckshot?

If you were to ask the biggest reason why someone would pick birdshot, the most common answer is overpenetration. They don’t want to take the chance of an innocent person or a family member in the next room or apartment getting shot by a stray pellet of buckshot. This is a self defeating problem when you get down to the numbers.

Buckshot is most popular in a few sizes, the most common of course being 00 and #4 (not to be confused with #4 birdshot). Buckshot in the 00 variety in a 2.75 inch shell is either eight or nine pellets and is .330 inches in diameter. In contrast, #4 buckshot is .240 inches with 27 pellets in a 2.75 inch round. While this sounds like a lot, compare that to a common birdshot load, #7.5, which is only .095 inches but there are 350 pellets per ounce and 12 gauge shells contain more than one ounce of birdshot. While you may be thinking the more the merrier, remember, if you’re trying to avoid hitting an innocent person, which is better, having a couple dozen #4 buckshot or several hundred pellets of birdshot flying through the air? 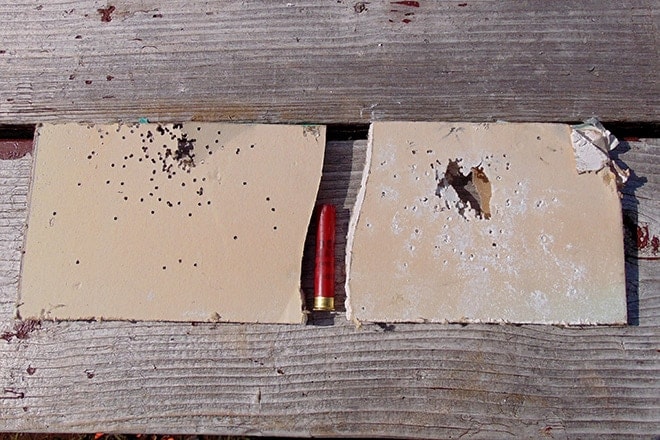 One thing that defensive tactics instructors teach is that you need and must be accountable for every single round that you fire. I ask, why would it be any different when it comes to a shotgun? Don’t think of it as a single shotgun shell as much as the number of pellets coming out of that shell. It’s not something you can have both ways.

Another misconception is that while buckshot will penetrate drywall with ease, birdshot somehow stops without going through, therefore keeping your loved ones or innocent people on the other side safe. In reality, birdshot, even though it doesn’t penetrate drywall as well as buckshot, will most certainly pass through it.

I decided to test this out on some drywall, so I took two pieces, each 0.5 inch thick, and placed them back to back with a space between them, much like you would find in a house. To further illustrate my hypothesis, instead of a 12 gauge round, I chose a lowly .410 round, a Fiocchi #8 with a 2.5 inch shell. By my math that means there are 205 .090 inch pellets in this load because they are double that number per ounce and the Fiocchi round is only a half an ounce.

I took the .410, lined it up at 7 yards and the #8s passed through both layers of drywall. If someone had been standing on the opposite side of a wall even with that small load, they might not have been killed, but they would certainly be going to the emergency room. Keep in mind, that was a #8 load — many recommend #6 or even #4 birdshot loads in your house and claim that they do not over penetrate. You can see what a tragic mistake that can be. 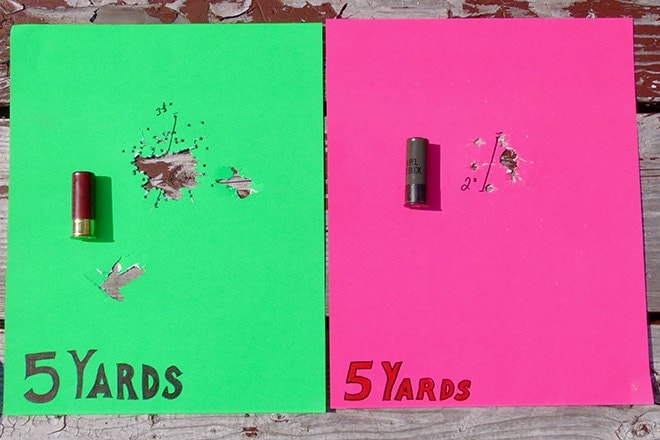 But this isn’t the only serious misconception I’ve known people to have about their defensive shotgun. Another is the notion that a load of buckshot spreads out all over the place as if you are throwing all the pellets one-handed at your attacker instead of firing them out of a barrel. Therefore these folks, erroneously, conclude that they would be better off with more pellets of birdshot. This can’t be further from the truth.

Like any shotgun owner, people new to defense shooting need to pattern their gun to see where various loads hit on target. No two guns are the same, but if you have a shotgun for personal defense, more than likely it will have a choke that is an Improved Cylinder. The spread on this choke at inside the house distances is not wide at all.

I took my Remington 870 to the range with some Winchester 2.75 inch 00 buckshot. This is the cheapest buckshot I could get, right around $5 for a box of five rounds, and some Federal Hi-Brass 2.75 inch #4 birdshot. I set each up to test at three different ranges, 5, 10, and 15 yards. Now my Remington has an 18.5 inch barrel with an Improved Cylinder choke — probably the most common barrel set up for personal defense.

At 5 yards, the two groups were fairly close, with the buckshot leaving just a 2 inch hole while the birdshot close behind it with a hole of 3.5 inches not counting the wad. However once the range increased, the differences became much more apparent. At 10 yards the buckshot was still closely grouped, only spreading out to 4 inches, whereas the birdshot was now more than double that, out to 8.75 inches. 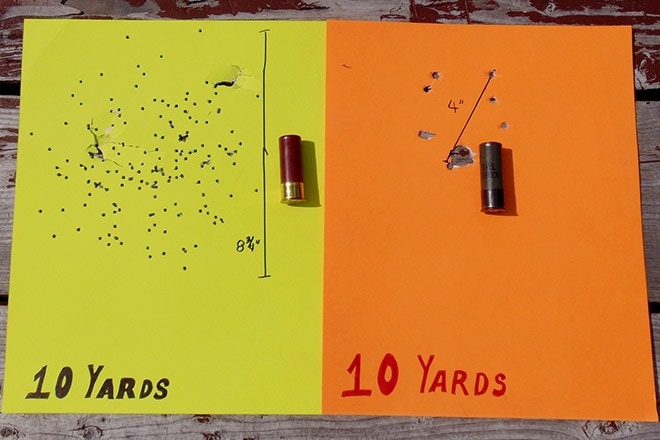 At 10 yards though, the buckshot remains fairly consistent with its 5 yard performance while the birdshot spreads out considerably. (Photo: David LaPell)

The final shot at the 15 yard mark drove it all home. The 00 buckshot was still grouped tightly at 5 inches only, but the birdshot was now starting to go off the paper, which is 11 inches in width. It’s hard to say how many pellets drifted off but you can clearly see that anyone using birdshot might have a hard time accounting for so many pellets and why it is so easy to see why it is the wrong answer for home defense on just the point of risking an innocent bystander.

Again, keep in mind I was only using #4 birdshot which has 135 pellets per ounce. If you were to choose #6 that number jumps to 225 and then again to 350 per ounce for the #7.5. The more pellets means the greater the risk of collateral damage.

The debate between using birdshot or buckshot for personal defense for your shotgun shouldn’t come down to emotions, but real facts. There is a reason why law enforcement agencies have been using buckshot for decades — if these guys could use something to do their job that prevented someone other than the bad guy from getting hurt, they would have been using it all along.

The truth is birdshot is not a good performer against the human body. Can in incapacitate someone? Of course. So can a .22 Long Rifle, but that doesn’t make this round preferable to the proven defense calibers out there either. If you are worried about buckshot because of what it can do, then perhaps using a shotgun is not for you. I understand that many are intimidated by the recoil of buckshot and heavier loads and there is nothing wrong with admitting that. But what is not ok is using inferior loads to make up for it. 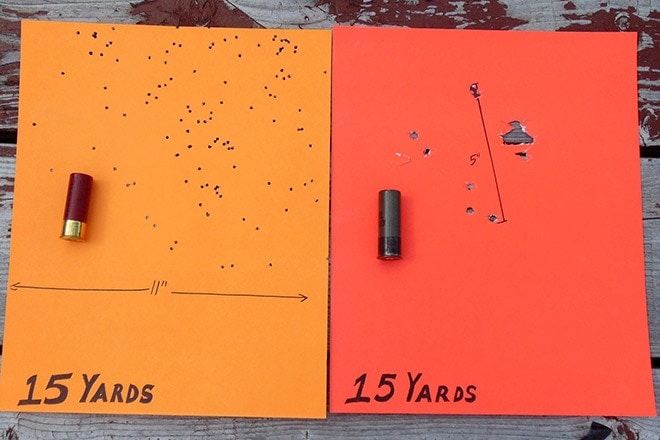 By 15 yards, the birdshot was patterning off my target. (Photo: David LaPell)

Birdshot is for hunting birds and small game. As demonstrated, to use it in an enclosed area like a home is actually more of a risk to anyone in the home with you. If you are worried about people in the next room, then that makes shot placement all the more important. More important than this is knowing the target and what is beyond it. That is one of the basic rules of firearms safety and it can’t go out the window for personal defense.

So what is the “happy medium” defense shell? I recommend going with the lighter loads of buckshot, #4 buckshot in a 12 gauge, #3 buckshot for 20 gauge etc. These loads don’t have quite the power of 00 buckshot, but you won’t have to worry about the hundreds of pellets of a birdshot load. Pattern them appropriately, and I think you will be surprised at why you might have ever considered anything else.