Crossbow manufacturers are integrating more and more firearm-specific options to make crossbows more appealing to the firearms market.  What happens when an AR-15 rifle meets a bow?  We get something like the Carbon Express Intercept Supercoil: a shoulder mounted weapon with an aluminum “barrel” on which the bolt rides, with powered optics, crisp triggers, adjustable stocks, forward grips, and picatinny rails. 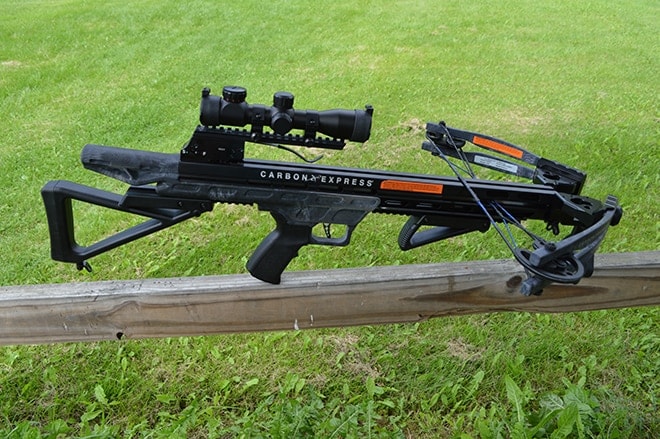 From what I’ve seen, Carbon Express’ new bows for 2015, the Intercept line of Supercoil and Axon, are on the leading edge of this crossbow revolution, narrowing the distance between gun hunters and archers.

From its headquarters in Flushing, Michigan, Carbon Express introduced two new bows for 2015: the Intercept Supercoil and Intercept Axon.  While Carbon Express does not claim its bows to be 100% made in the USA, they do advertise the Supercoil as “designed and assembled in the USA of domestic and imported parts.”  While I always prefer products made entirely in the states, calls and emails to CE customer service are handled locally—and efficiently—in Michigan. 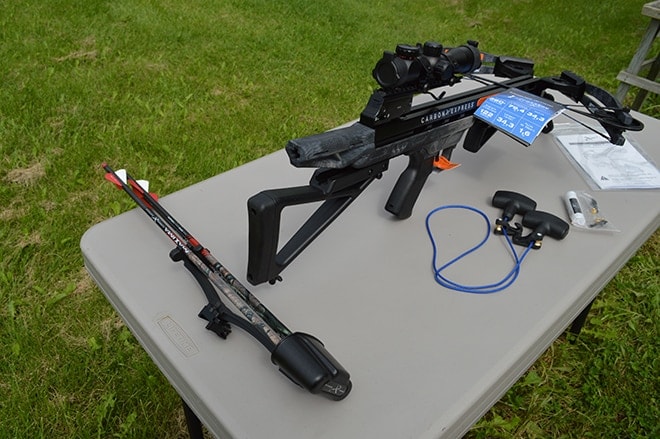 Our test bow is the CE Intercept Supercoil.  This smallish crossbow comes packed in a cardboard box, along with a 4x optic with an illuminated, etched, bolt-compensated reticle.  Each bow is manufactured using state-of-the-art performance carbon-infused limbs, CNC-machined risers, premium aluminum alloy cam sets and tunable synthetic strings and cables for superior precision. A metal trigger group and anti-dry fire mechanism are standard. 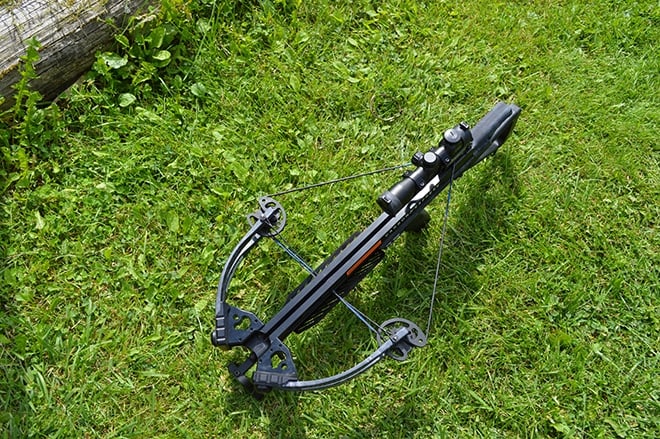 Measuring only 13.5” axle to axle, the Supercoil is one of the most compact hunting crossbows I’ve ever seen. (Photo: Kristin Alberts)

The lines are one of the most compact on the crossbow market today, measuring only 13.5” axle to axle when cocked, making it very maneuverable in the limited confines of 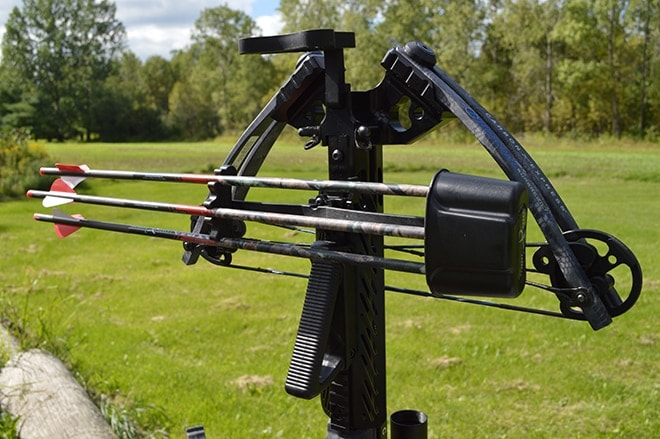 The quiver and three bolts can be mounted basically anywhere on the bow, via Pictinny rails. (Photo: Kristin Alberts)

The Supercoil measures 13.5” axle to axle when cocked, 17” uncocked and 30.25” to 32.25” overall length depending on buttstock customizations.  At 7.4 pounds, it’s one of the lighter and more compact crossbows on the market.  Length of pull can be adjusted from 13” to 15,” customizing to fit about any sized shooter.  In addition to the optic, the kit also includes a quality rope cocker, quick-detach 3-bolt quiver, 3-Maxima Hunter red 20” carbonfiber crossbolts, rail lubricant, and three 100-grain field points with optional 25-grain weighted collars. 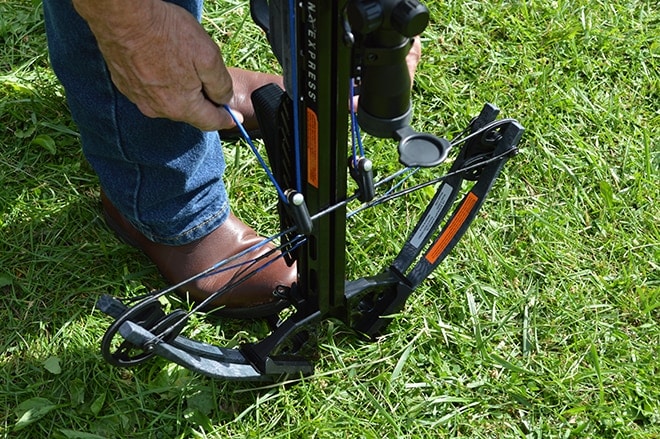 The Carbon Express catchphrase for the Supercoil is “the new definition of a modern crossbow.” And that’s exactly what it is.  Each year, advancements in crossbows grow by leaps and bounds and 2015 is officially the year wherein crossbows draw the best features from the gun industry.  The Supercoil is available in most archery shops around $759.

Why the Supercoil is especially appealing to gun lovers

The Supercoil’s picatinny platform accommodates both milspec and commercial AR parts, allowing customizations of the forearm, grip, stock, quiver and optional accessories. Even the Supercoil’s modular buttstock can be moved along the rear rail for adjusting length of pull and full eye relief on the optic. 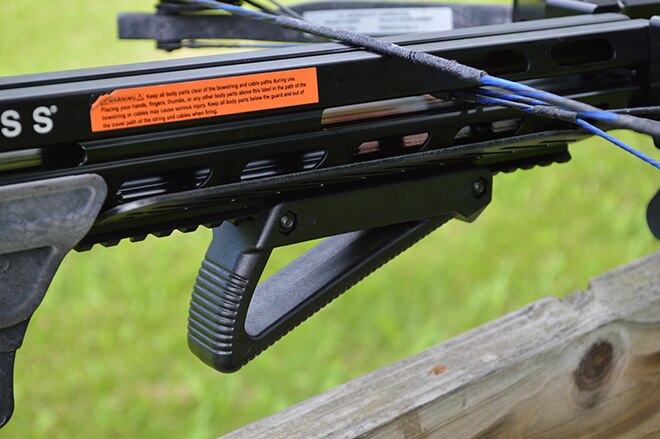 If the Supercoil is not “gunnish” enough for you with its half-length rail, check out its bigger brother the Axon with its full length picatinny rail and true 6-position AR stock.  The Supercoil is a bit lighter, paying more attention to compact size and balance, though the majority of the weight still ends up forward.  The only crossbows I’ve seen to hit a true weight balance are the newest reverse limb bows.  The majority of crossbow hunting is not done from a freestand position, however.  The Supercoil’s bullpup measurements allow it to sit nicely in cradles like Caldwell’s Dead Shot Field Pod in a ground blind, on rests, or on windowsills of deerstands. 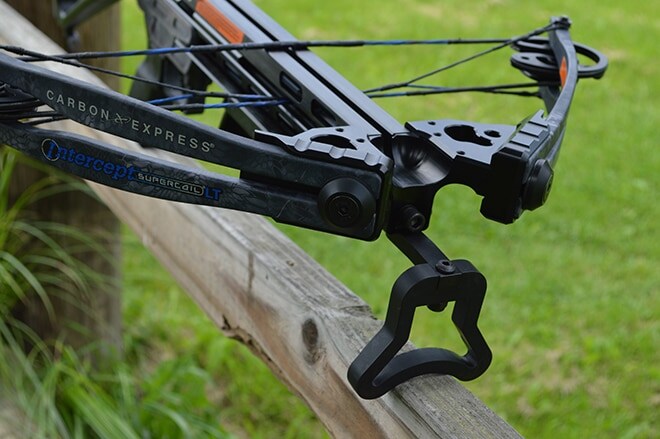 The compact design essentially positions the Supercoil’s trigger mechanism 4″ forward when compared with conventional crossbows, thereby creating a more comfortable balance point. Though we all enjoyed the forward AR style finger grip, it can be easily replaced by a vertical forward grip or even a GripPod with deployable legs.  Sling swivels make it easy to carry afield, not unlike a rifle and of similar weight.

We headed out to the archery range with the bow and a dozen bolts tipped with 100 grain field points.  In a smart move, Carbon Express also includes three balanced weight collars for the field points, allowing them to be converted quickly to 125 grain.  Almost all crossbow hunting broadheads, whether mechanical or fixed blade, are either 100 or 125 grains. 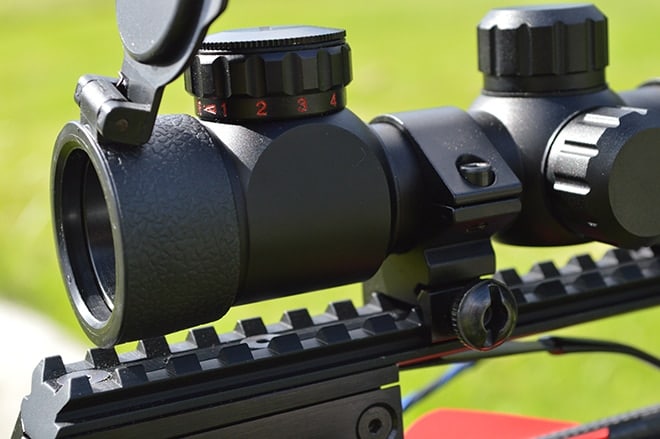 We sighted in at 20 yards, and then moved out through a process of trial and error at various distances.  The scope’s crossbow-specific multi-reticle bolt-drop-compensators allowed us to stay on target, between 5-45 yards on the upper compensators and from 50-100 yards on the lower, larger compensation hashes at the lower of the optic.  Changing to 125 grain tips did not alter impact nearly as much as we suspected, especially inside of 40 yards, though on the whole, penetration into the bags was slightly deeper with the 125 grain collars in place. 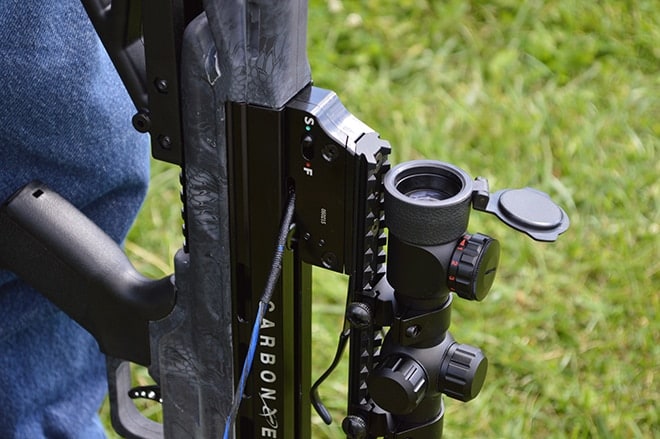 Even with its 175# draw weight, the Supercoil was quite simple to cock with the included rope cocker.  Given its relatively short power stroke of 13.5” and its small stature, it’s easy to get good leverage over the bow for cocking.  The crossbow performs well, launching bolts upwards of 360 fps with 122 ft. lbs of kinetic energy, leaving zero wait time between trigger pull and bolt-target impact.

The safety is automatically engaged when the bow reaches full draw with an audible click, a nice and not uncommon feature preventing accidental dry fire.  Initial shots into a standard vertical bow bag target at 25 yards passed right through and buried into the ground.  Our Morrell Yellow Jacket crossbow specific bag target stopped all the shots from 20 yards and beyond, though anything inside those distances penetrated past the fletching. 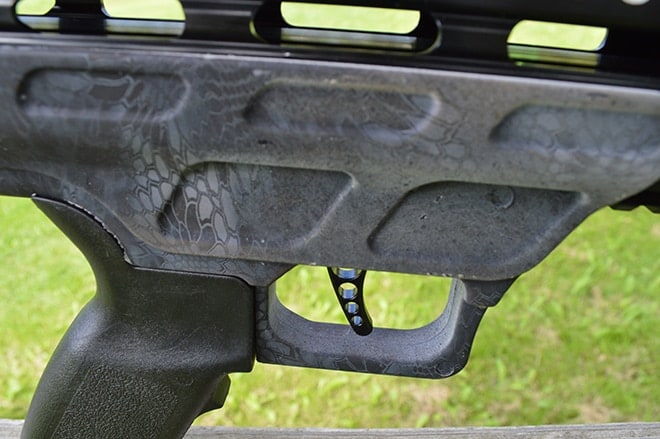 Skeletonized 3.5 pound trigger break–one of the crispest triggers to be found on a factory crossbow. (Photo: Kristin Alberts)

CE advertises the Supercoil’s trigger to be no-creep and 3.5#.  When we tested trigger pull with the Lyman Digital Trigger Pull gauge, it broke at a crisp 3.4#.  This is not only a great trigger in general, but any archer who has spent time shooting various crossbows knows that this type of trigger is absolutely exceptional in an industry where the norm falls around 7.5#, creepy, gritty, and just plain pathetic. 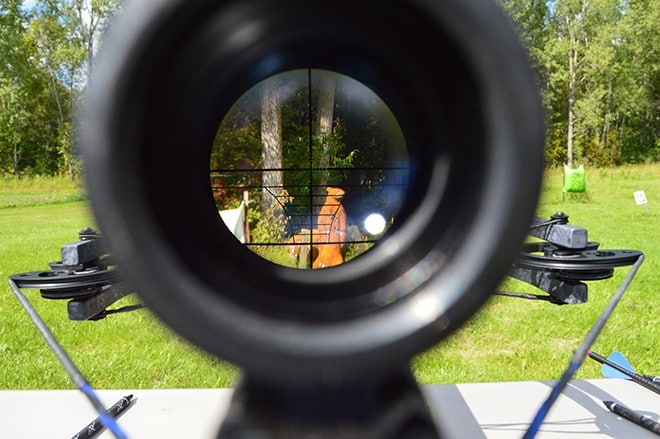 I have shot crossbows from every major manufacturer this year, and the only two holding a candle to the Supercoil’s trigger are Scorpyd and Killer Instinct.  The latter’s Trigger Tech brand trigger is a thing of beauty, but that’s a Killer Instinct review for another day.

Carbon Express’s included, but unbranded, optic is easy to use, and with 4x power, has plenty of magnification and clarity for the ranges of the weapon.  An included battery powers the red/green illuminated reticle with five intensity variations for all lighting conditions, and can be used even without power. 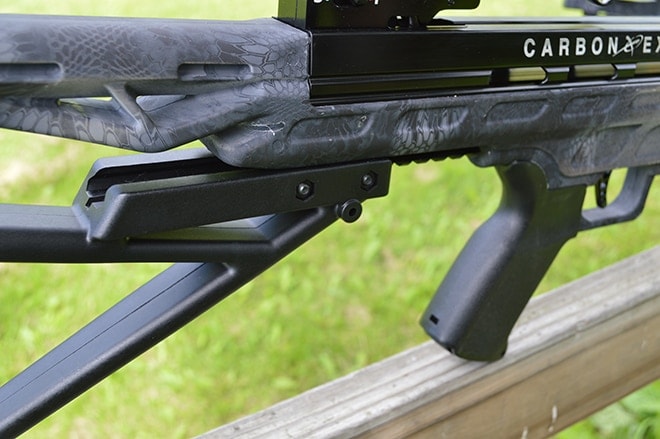 The low profile design of the front foot stirrup allows plenty of traction for cocking and is less intrusive than the larger stirrups on other manufacturers’ crossbows.  The ambidextrous safety controls are a big plus, though disengaging the safety makes an audible click that could be an issue in quiet woods.

The black Kryptek Typhon camo is understated, classy and was appreciated by all the testers for its ability to disappear inside a dark hunting blind.  However, the SilenTech coating had a few small areas of peeling after only three range outings.  How this overcoating will wear after a season of hardcore hunting remains to seen. The camo underneath is unfazed, but the peeling could become unsightly. This is unfortunate, because the grippy, rubbery feel was loved by all shooters. 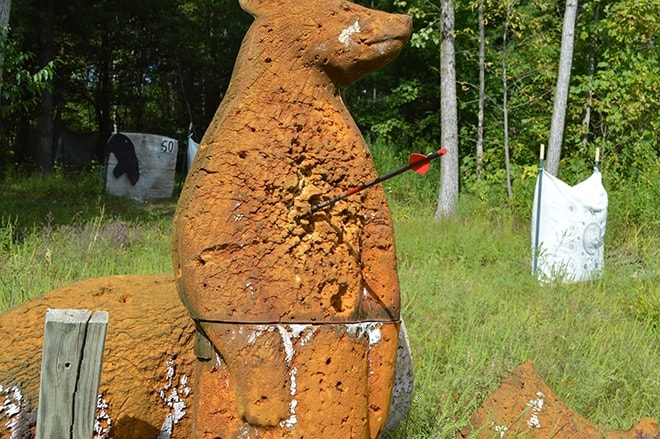 Once we mastered the reticle system, this 50-yard bear target was an easy shot. (Photo: Kristin Alberts)

If you’ve been a gun lover on the outside looking in at the world of archery, now is the time to give crossbows a try.  The firearms-specific features incorporated into this and other crossbows are just the things needed to pull once-leary buyers into the market.  I know they hooked me, once turned off completely by the crappy triggers and old fashioned design.  The Carbon Express Supercoil is an excellent place to start.  For under $800 you can have a well-built crossbow with everything you need to extend your hunting season.