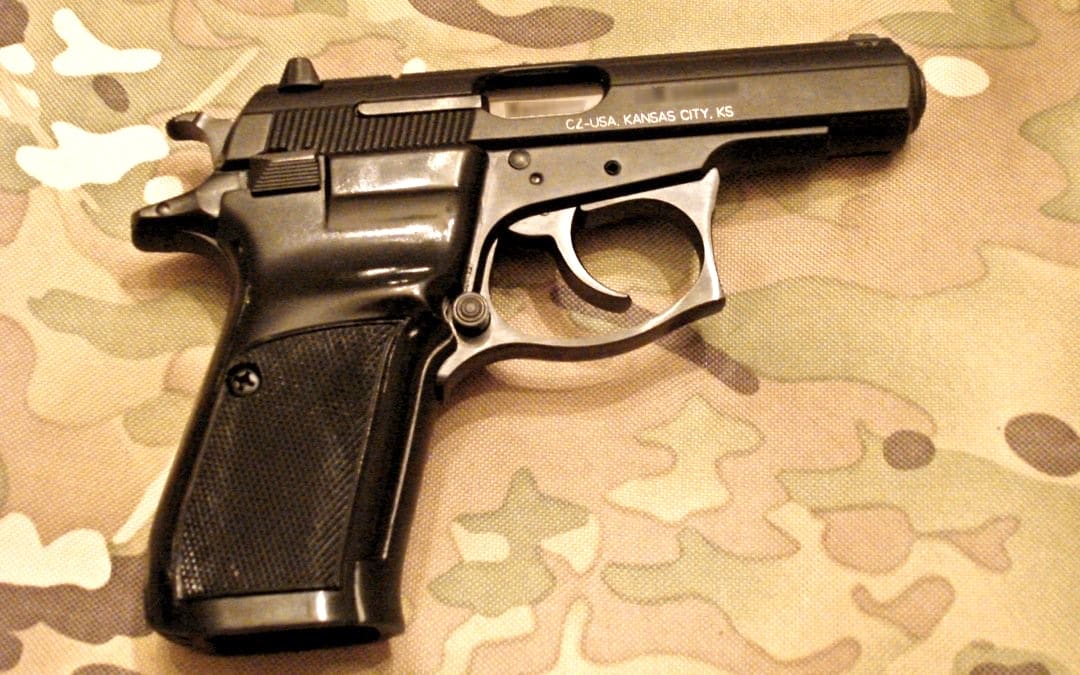 THe CZ-83, like a PPK only less expensive and more reliable. (Photo by Brett Kirksey)

Over the past century virtually all major firearms manufacturers from countries all over the world have produced handguns chambered in .32 ACP. Czechoslovakia, the birthplace of the CZ-83, is no longer with us, but the CZ-83 is still dependable 30 years after its introduction.

You may have heard of the CZ-75, Skorpion or the AK-like Vz. 58, but the CZ-83, civilian counterpart to Vz. 82, is one of the lesser known firearms produced by CZ.

Firearms adopted by the Czech military are prefixed “Vz” which stands for “Vzor” (model). This is comparable to the U.S. military’s nomenclature where the prefix “M” designates official firearms; for example, the Beretta 92FS serves as the U.S. military’s M9 pistol.

By the early 1980s, the official sidearm of the Czech military was the aging Vz. 52 chambered in 7.62x25mm Tokarev. The Soviet Union strongly urged its Warsaw Pact allies to adopt the standard Soviet Makarov pistol, the Makarov PM. CZ, unsatisfied with the design of the eight round Makarov PM, began work on their own 12 round pistol using the 9x18mm Makarov. It would receive the military designation of Vz. 82 and the civilian label of CZ-83.

In the early 1990s CZ ceased production of a distinct Vz. 82 pistol and began producing the CZ-83 in 9mm Makarov along with its civilian chamberings. The Czech Republic military still utilizes the Vz. 82/CZ-83 9x18mm Makarov today.

Unfortunately, production of the CZ-83 ceased in January 2013 when CZ began focusing on compacts and subcompacts that use the CZ-75 design. The .380 ACP CZ-83 is available on the used market and relatively easy to find. However, most owners are unwilling to part with their .32s, and may be difficult to locate. 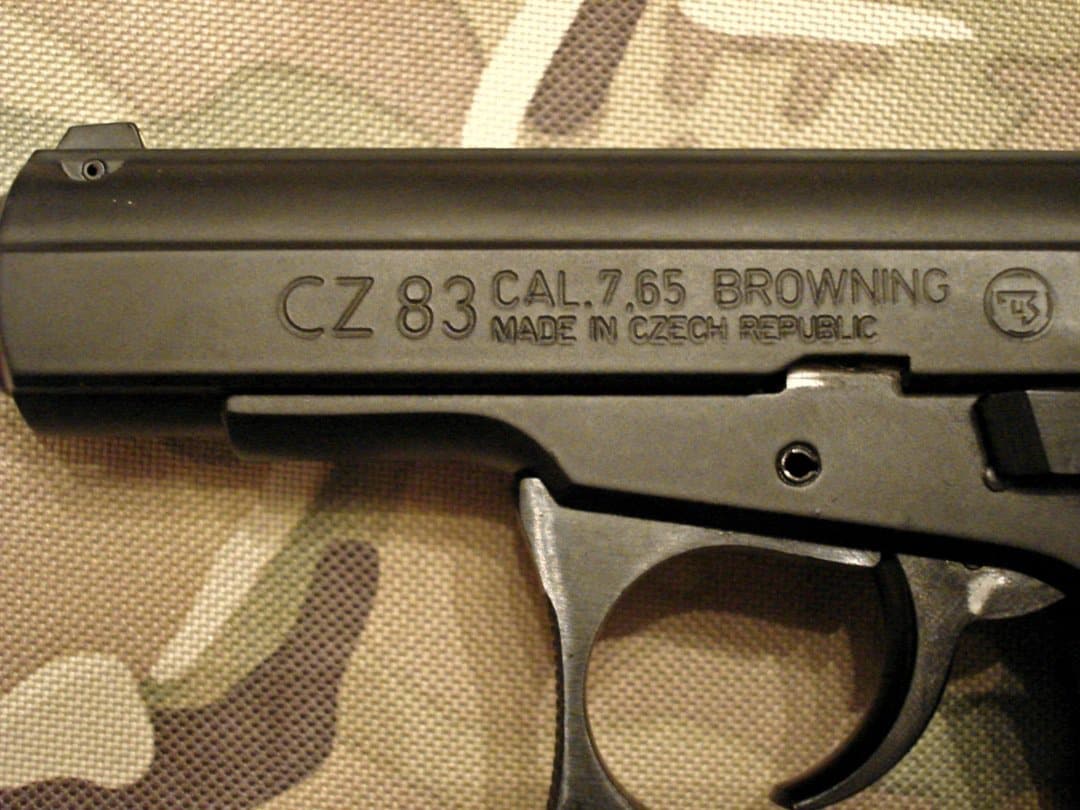 The CZ-83 bears some similarity to the Walther PPK. The PPK had been around for almost 20 years when CZ designed the CZ-50, a predecessor of the CZ-83. Their similarities suggest that Czech designers drew inspiration from 007’s famous sidearm.

The CZ-83 is a compact blowback pistol with a single and double-action trigger with a fixed barrel that increases overall accuracy. It has an ambidextrous safety and magazine release making it ideal for both left and right handed shooters. The CZ-83’s military sibling, the Vz. 82, was the first service pistol to feature an ambidextrous safety and magazine release.

The CZ-83 has two carry options, cocked and locked with the safety on or no safety with double-action. The safety will not engage unless the hammer is cocked. Meaning, the danger of leaving the safety on when prepped for double-action use is non-existent. The single-action trigger pull is between three and six pounds while the double-action pull is 13 pounds.

The frame is all-steel and the grips are plastic. Thanks to its steel construction, the CZ-83 weighs a sturdy 1.76 pounds (unloaded). This weight coupled with the .32 ACP round produces very little recoil. Many compact, lightweight, polymer .32s still produce enough recoil to bother the most recoil sensitive shooters. The CZ-83 does not have that problem.

The magazine holds 15 rounds plus one in the chamber; a relatively high capacity for a compact handgun. I know of no other compact .32 ACP with a capacity as high or higher.

The CZ-83 has very nice fixed white three-dot sights that have a slight greenish “glow” to them. Default sights are not Tritium, but Tritium sights and adjustable sights are available. They require a qualified gunsmith for installation.

The CZ-83 come in matte blue and satin nickel, both with black plastic grips. Certain companies also offer custom wooden grips for the CZ-83 and the Houge Handall is another option for the CZ-83. 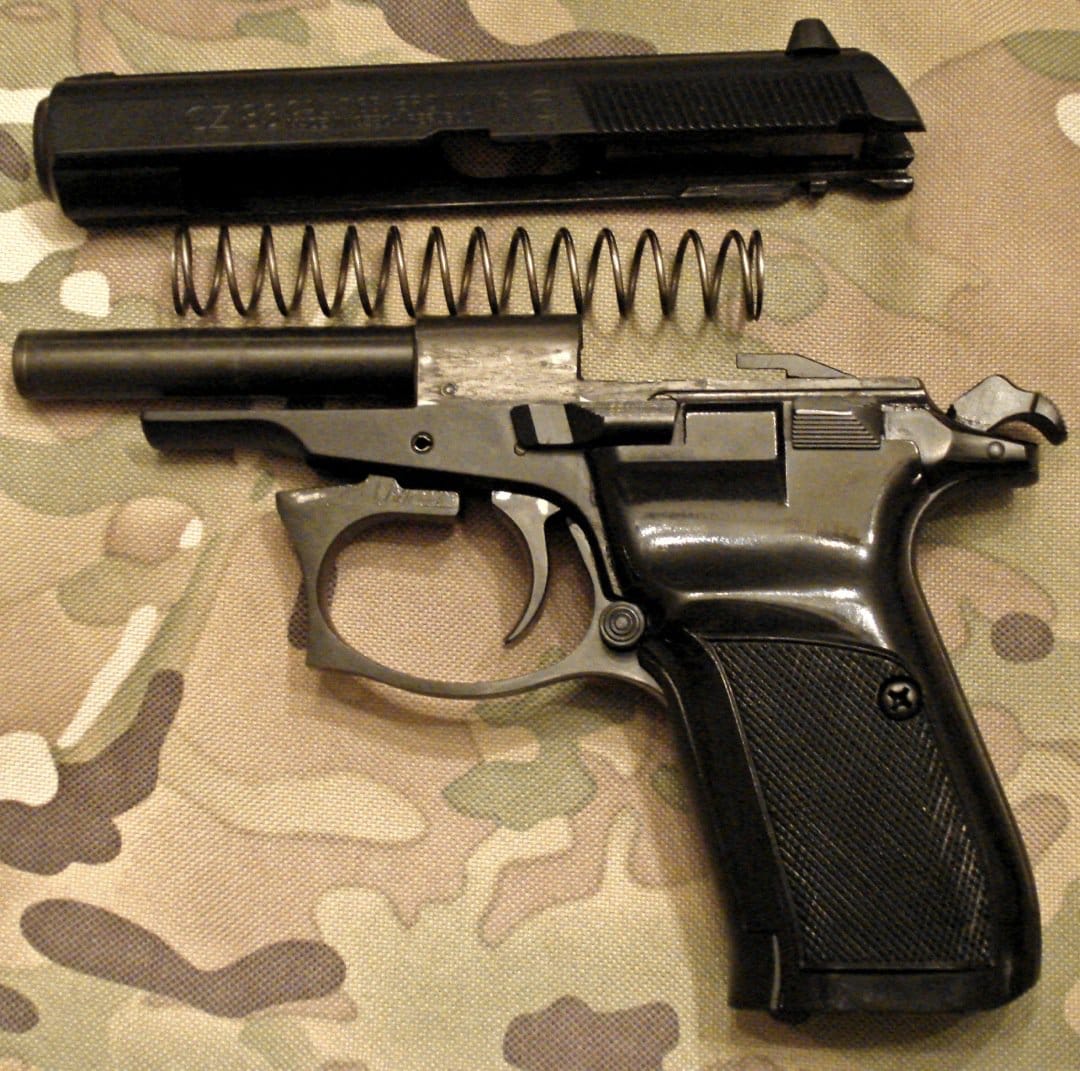 15 round .32 ACP magazines are still available new and are obtainable directly from CZ as well as other firearm retailers; expect to pay $40-$50 per magazine.

Introduced in 1899, the .32 ACP was John Browning’s first cartridge design. It gained popularity rapidly and became a tremendous success. Between 1899 and 1909 Fabrique Nationale was solely responsible for the production of over 500,000 guns chambered in .32 ACP.

Police and military have used .32 ACP throughout the world. It is also a popular civilian round in Europe, especially in countries that restrict 9mm ammunition. Like Browning’s design for the 1911 pistol, the .32 ACP has stood the test of time.

Sellier & Bellot and Dynamit-Nobel/Geco performed flawlessly. PMC in both FMJ and JHP failed to feed every two or three rounds.

European .32 ACP FMJ uses slightly heavier bullets (73 gr vs. the American 71 gr) and is known to be hotter. FMJ in .32 ACP performs well and usually meets the FBI’s 12 inch penetration recommendation. Given the hotter loads and slightly heavier bullets of European .32 ACP FMJ, I feel comfortable sticking with them. Additionally, Sellier & Bellot is a Czech company and something just seems right about using Czech ammo in a Czech firearm.

The CZ-83 feels like it is made for your hand. I have small hands, but people with large hands found the fit just as comfortable.

The gun is balances nicely and the minimal recoil is very easy to handle. Anyone who can handle a .22 LR can handle .32 ACP in a CZ-83.

CZ is widely known for producing accurate firearms and the CZ-83 is no exception. It comes sighted by the manufacturer for 25 meters. Accuracy tests for the CZ-83 were practical, not scientific. I wanted to see how accurate it could be off-hand at the standard self-defense distance of 21 feet. I shot without my vision correcting glasses or contact lenses and used fairly rapid follow up shots with little or no additional aiming.

About half the shots were within two inches of the target’s center mass and the other half were within 3 inches. The sights are perfectly centered right out of the box; I am no marksman so these results were pleasantly surprising. The CZ-83 is definitely accurate enough for self-defense purposes, even for those without much skill in aiming.

I don’t want to sell the accuracy short so I must mention that I’ve read more than one review involving a bench rest. Reviewers were able to get one inch groups at 25 yards.

The CZ-83 .32 ACP is an excellent handgun. I cannot recommend it highly enough. The compact steel frame combined with the .32 ACP cartridge produces very little recoil. With 15 round magazines, it’s the highest capacity .32 ACP available and the European 73 gr rounds provide muzzle velocity and muzzle energy approaching .380 ACP. Overall, the CZ-83 is a nice choice for everyday carry.