I write today with an urgent appeal. Christmas is coming and there’s only one thing on my list this year—a Webley-Fosbery Automatic Revolver.

Now I know what you’re thinking—an automatic revolver? Yes, Santa Clause, there is an automatic revolver. The Webley-Fosbery looks like a revolver, but moves like a pistol. The blowback pushes the barrel, cylinder, and frame back. This brilliant motion rotates the cylinder, cocks the hammer, and eats up most of the recoil. As a result, the muzzle stays pointed toward the target instead of tipping up to the sky. 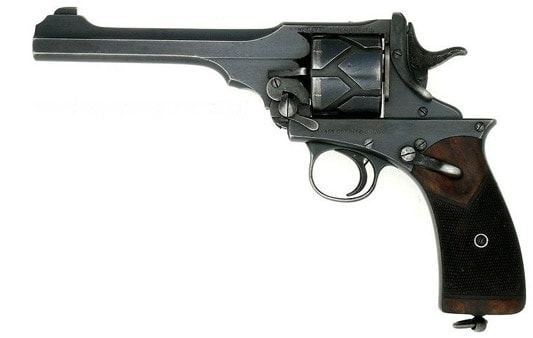 This gun is a beast. There’s more steel in a Webley-Fosbery than there is in the new F-150. At close to three pounds, empty, the Automatic Revolver is not light, so you may want to give the reindeer some extra oats.

I asked my wife for the Webley, but she doesn’t like the idea of giving me war-toys for Christmas.

I tried to tell her that this Webley was never all that popular in times of war. Rumor has it that the gun was a bit finicky. The mechanism of the Automatic Revolver doesn’t like dirt or mud.

So what if it can get gummed up. I promise to keep it clean.

You’ve seen one before, even if you don’t remember. One of the hired guns in The Maltese Falcon uses a Webley-Fosbery Automatic Revolver to kill Sam Spade’s partner, Miles Archer.

The cop shows Spade the gun and Bogart or John Houston (who wrote the screenplay) screws up the line good. Bogart mispronounces the name and calls it an eight shot .45.

But it’s right in the novel. That was the first time I had ever heard of one and I thought Dashiell Hammet was off his rocker. An eight shot .38? And an automatic revolver, too? Too rich. Writers get this kind of crap mixed up all the time, but then I looked it up, because Hammett was as good as you could be and still be mortal. Sure enough—he’d nailed it.

So that’s what I want.

Also, could you score a copy of Zardoz? Zed (Sean Connery in thigh-high boots and red Underoos) uses a Webley-Fosbery Automatic Revolver in this often overlooked cinematic gem. 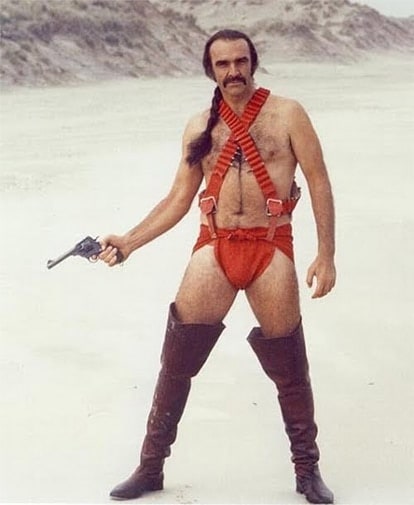 Feel free to use the chimney. I’ll leave my paperwork under the tree, so just file that with BATF or whoever and we’ll be square.