We all have special areas of knowledge that changes how we appreciate things. Hand me a glass of wine from a $10 bottle, and I couldn’t tell you the difference between that and a glass from a $100 bottle. On the other hand, give me a shot of cheap blended scotch versus a nice single malt and I could to tell you exactly what the difference is in explicit detail. 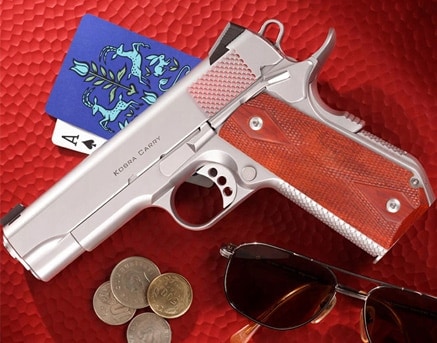 If you’re the kind of person who can tell the difference between a $1,200 premium factory 1911 and a custom 1911 that costs twice as much, then the Ed Brown Kobra Carry is something you should try.

The Kobra Carry is a Commander-sized (4.25-inch barrel), single-stack 1911 intended for concealed carry. It’s a custom gun put together with high-quality components that are all fitted together perfectly by a single craftsman. There’s nothing ‘factory’ about it. The model I was able to look at belonged to a good friend, who bought his a few years back.

This particular Kobra Carry has deep bluing, the standard three-hole aluminum trigger, tritium night sights and traditional double-diamond grips in lovely walnut. Otherwise it’s mostly just the ‘basic’ Kobra Carry model, including a one-side safety. While I don’t know what my friend spent for his a few years back, but now such a gun would run you about $2,500. 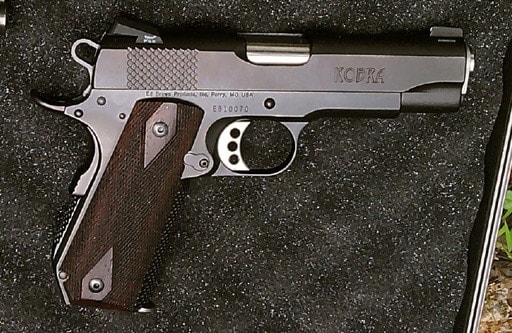 One of the biggest selling points on the Kobra Carry is its concealability. According to the company’s website, the Kobra’s proprietary “Bobtail” housing – the bottom of the grip, where the mainspring housing is – has had the back bobbed off, so with its full-sized frame and magazine, the Kobra Carry will print less when concealed.

It also has what Ed Brown calls his “snakeskin” treatment in place of slide serrations or checkering, which he describes as “a directional pattern, meaning it is smooth to slide your hand up, but bites in for a snug grip the other way where you need it.”

Now, I’ll be honest, this gun is beyond my ‘knowledge base.’ It is better than I can shoot. It has nuances that I cannot fully appreciate – not by a lot – but by enough. And that’s ok because I wasn’t the one to spend that kind of money on it. However, I know enough that I can appreciate much of what this gun is. And in an odd way, it challenges me, teaches me.

A little something on craftsmanship

Ed Brown has earned a solid reputation for his 1911 and the Kobra Carry is both part of the reason for that reputation. It’s an excellent example of what Ed Brown is capable of.

Shooting the Kobra was not that much different from shooting another very-high-end 1911. Everything about it was pretty much perfect, as I expected. The trigger felt like oiled glass. The balance? Perfect. Everything felt solid and secure.

There was an unexpected comfort from the “Bobtail” – an improvement that pointed out a minor problem with all the other full-grip 1911 I hadn’t even noticed before.

The ‘snakeskin’ on the front and rear straps was comfortable and secure, meaning it didn’t dig into my hand at all. The beavertail is a slightly different design than on most 1911s, and allows for a deeper, more secure grip with my large hands, which made even hot +P self-defense loads feel mild.

And there’s a subtle smoothing to all the edges and corners – it still looks and feels like a classic 1911, but there’s just that much less chance of something catching on a holster or snagging on clothes. Likewise, the matte finish isn’t that noticeable, but it cuts down on the glare just enough to make a significant difference.

I’m not one to go out and drop this kind of money on a custom carry gun, but if I were in the market for a high-end yet eminently functional 1911, the Ed Brown Kobra Carry would be one of the first places I look. And I’d say that there’s better than even odds that it’d also be the last place I’d look.