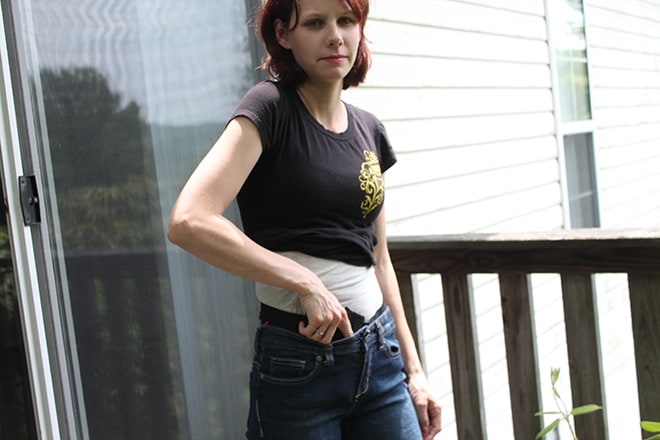 The author performing an abdomen draw from a Can Can Hip Hugger concealed carry holster. (Photo: Jacki Billings)

I remember my first holster shopping excursion. I had just picked up my first gun, a Walther P22. I had my concealed carry permit and was ready to start packing. I headed to the local gun shop where my enthusiasm was met with crushing disappointment. The only holster they had that claimed to be designed for women was a IWB pink number. Even worse, the holster didn’t work with my body at all. How could something marketed towards women just not fit the bill?

Back carry on Can Can Hip Hugger holster. Usually averse, I don’t’ mind the pink trim. (Photo: Jacki Billings)

Much like a girl has to kiss some frogs before she finds her prince, I had to sort through a bevy of holsters before I found one that would work. Though my usual rig does the job I’m always on the hunt for something better, because something better has to exist somewhere. After almost seven years in the concealed carry world, I might have a contender. It’s called the Can Can Hip Hugger and it is one impressive holster. 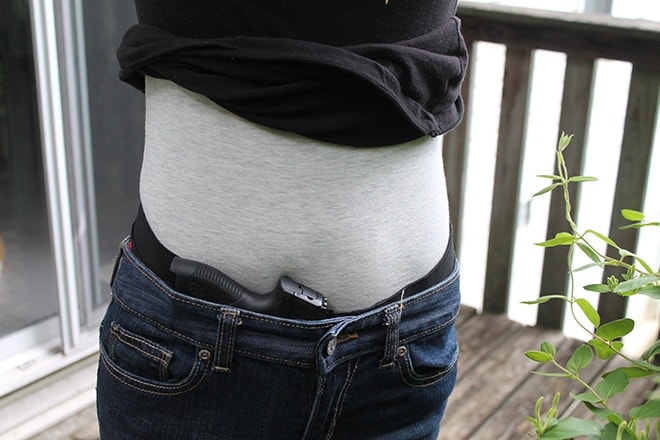 Abdomen carry with Can Can Hip Hugger. (Photo: Jacki Billings)

For this review, I got my hands on Can Can’s Hip Hugger model in black with pink trim. Before you roll your eyes at the pink, it’s subtle and used just an accent color. A hater of most things pink, even I found the Hip Hugger adorable.

I rarely say that about holsters. Usually they are functional or not functional. Cute is never part of the package. Somehow Can Can has upped the ante in women’s concealed carry by making their products visually appealing to women. As mentioned, I tried out the black and pink model but Can Can offers a variety of other colors. 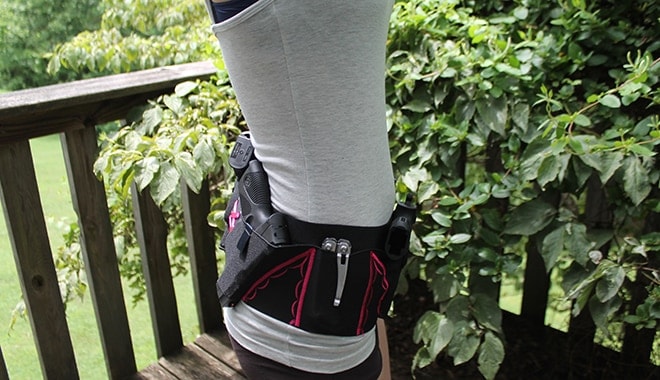 The hip hugger holster holds guns in place though a combination of elastic fabric and magnets. (Photo: Jacki Billings)

Constructed out of a stretchy elastic fabric, the holster is very forgiving size wise. I received one that was an extra-small. When it arrived, I was cinching down to the last of the three eye-hook enclosures. After a month long visit back home where I ate my fair share of good, old-fashioned Southern cooking I was letting the Can Can out to the first eye-hook.

That’s always the concern with holsters of this type. One weight gain or weight loss and you’re out a holster. Luckily, the Can Can offers some leeway so a little addition or subtraction won’t render it useless. 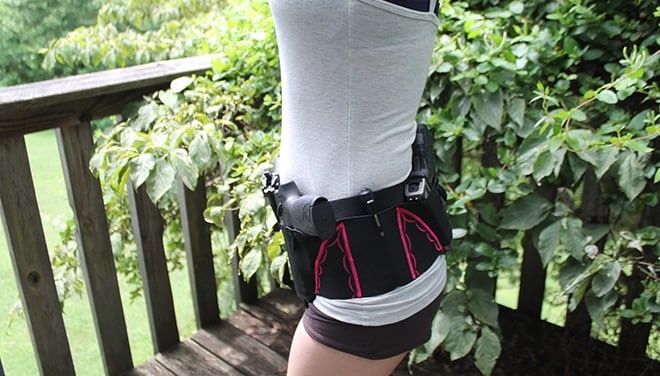 The Hip Hugger has six pockets overall — two small and four large. The large pockets, designated with a satin tab, are firearm compartments. Offsetting the handgun pockets are smaller sized ones perfect for extra magazines and multi-tools/knives. The smaller pockets sit directly on each hip while the firearm areas are located on the abdomen and near the small of the back at about the 5 o’clock position.

Those facing the zombie apocalypse are free to carry up to four firearms at once. A cell phone extender, sold separately, will allow a cell phone to be added to the carry kit as well.  Realistically, though, the holster is best suited to one or two firearms. 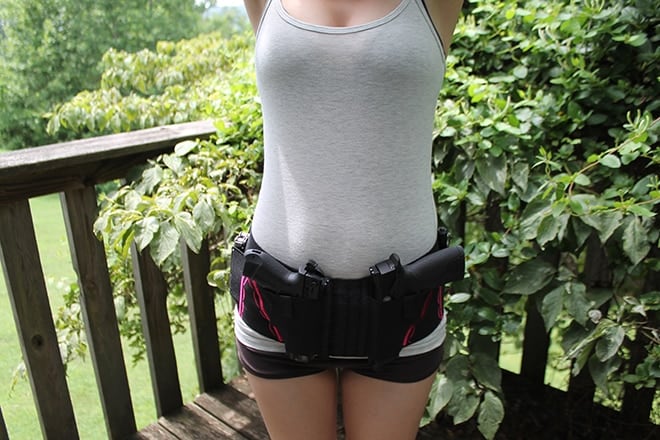 There are no retention straps or molding to the Hip Hugger. What keeps the guns in place is a combination of elastic fabric and magnets. During the course of my testing, I saw no issues with retention. From the playground to the backyard, the Can Can kept up with my kids and me. I even wore it on a recent trip out of state that entailed a nine-hour drive with my kids alone. It held up, surviving the drive itself and the frequent pit stops. 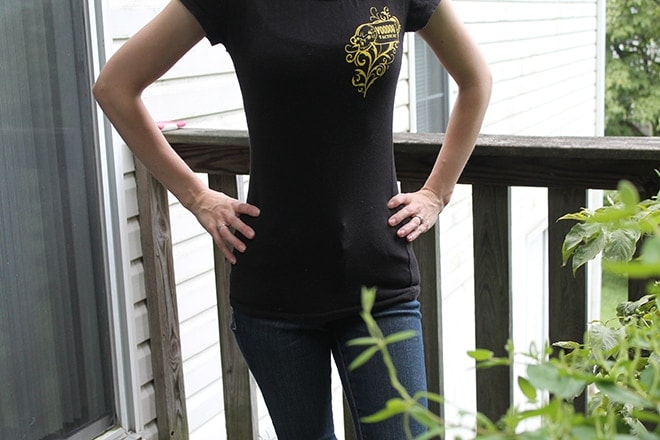 The Hip Hugger does as its name implies, and rests on the lower hips. I found that it works best just above where the leg meets the hip socket. Any lower and it rubs the upper thigh. Any higher and it puckers up top. You got to hit the sweet spot when situating it, but once you do it works.

I tried the Can-Can out with a variety of pistols from my collection to include a Taurus 709 and 650, S&W M&P .22, Walther P22 and Springfield Mod.2. At one point, I was sporting all four at the same time. While I wouldn’t necessarily recommend packing four guns at once, the Can Can at least gave me that option. 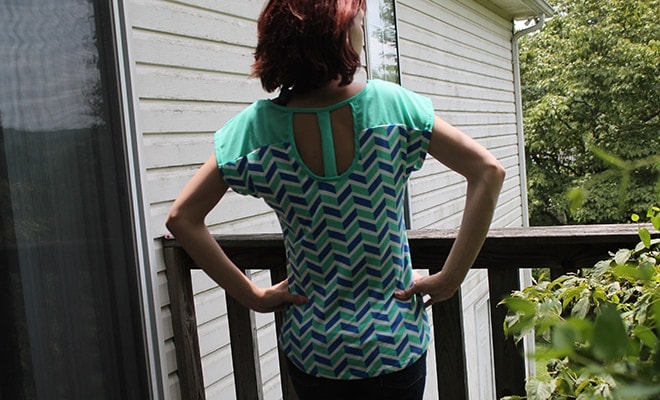 … and back carry. (Photo: Jacki Billings)

I switched between the two modes of carry, but ultimately preferred to stash my gun in the right, back compartment. On the back, I hardly noticed their existence. Back carry seemed to be a bit easier to conceal in terms of clothes for me as well. I found I was able to wear tight fitting shirts and even skinny jeans with my firearm stowed behind.

While we’re on the topic of clothes, the Can Can really impressed with its versatility. I wore this holster alongside jeans, shorts, skirts and even yoga pants. The only outfits that don’t work are the ones that you can’t hip carry with anyway. (Think rompers and dresses.) 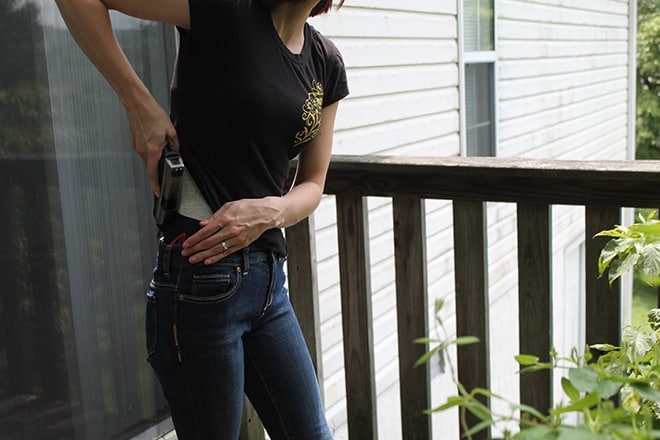 Drawing from back carry with Can Can Hip Hugger holster. (Photo: Jacki Billings)