It was about midnight when I got home and opened the box containing the Meopta Meostar R2 1.7 – 10×42 with the 4C reticle scope. I wanted to get a quick peek at it before I went to bed, as I had a quick turnaround before I had to be back at work in a few hours. 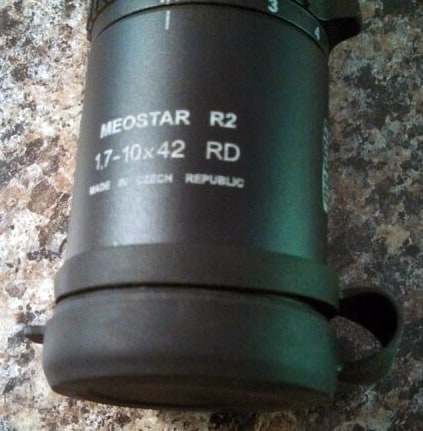 The first thing I noticed when I opened the package was the quality of the build. The finish was flawless and it was obviously very durable. I played with the magnification ring and marveled at how smooth it was to adjust between 1.7 and 10X magnification. A quick look through the glass before bed and I was blown away by the clarity of the glass.

My experience with rifle scopes has been mostly in the tactical field. From my time in the military to my current position in the tactical law enforcement community, I have gotten the opportunity to work with some of the biggest names in the tactical scope industry. There was no denying that the Meostar R2 is definitely a high end, well-built optic.

For the rest of the week I played with the adjustments on the elevation and the windage turrets, as well as the illuminated reticle knob. Every click on the turrets is crisp and clean. What I really like about the illumination knob is that in between every brightness setting there is an off position. This means that once you find a setting you like, you can quickly return to it without having to spin through all the lower settings to find it. This is a great feature, and becomes very useful in low light shooting or hunting situations. I couldn’t wait to get this thing mounted and shoot with it. 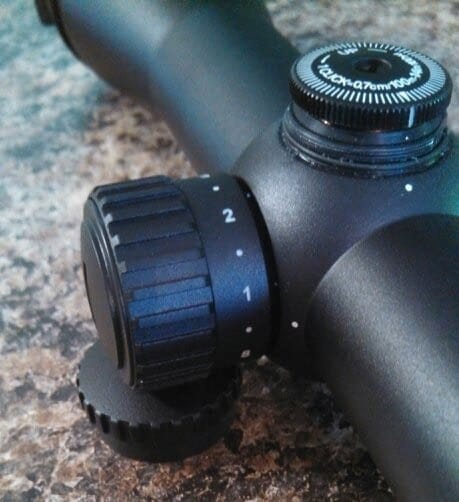 Turrets for elevation and windage adjustments. Illuminator on other side. (Photo: Tommy Goodson)

Once the rifle was zeroed, I played with the elevation and windage knobs and to my surprise I was able to return the knob back to zero without adjusting the strike of the round! This is a big deal to someone like me, as I like to shoot long distance and really like to dial elevation when I get past a certain point to account for bullet drop. I simply pushed down on the turret and it spun freely back to where the index line on the turret met back up with the dot on the scope housing so I was back at zero. I tried the same with the windage and again, got the knob set right back to center without adjusting the strike of the round. Now, if I wanted to dial any elevation or windage as opposed to hold over I could do so and would have the reference point on where to start and bring it back to zero when finished.

Next, as the scope is in the second focal plane, I wanted to see if there was any shift in impact at various magnification settings. I fired a group at a piece of steel at 100 yards at maximum (10X) setting. Then, I adjusted the magnification a few settings at a time and fired five rounds at each setting until I reached the minimum setting (1.7). There was no impact shift. Awesome!

Next, I pulled out some of my other toys for a side by side comparison. As far as clarity and light transmission, the Meopta R2 was amazing and definitely held pace with my Nightforce, and in my opinion even edged out my Vortex.

After the side by side comparison I took the rifle downrange for some closer shooting. Backed off to 1.7 on the magnification ring and the illumination set to maximum I played with some quick snap shot drills. For this I snapped the rifle quickly into my shoulder and fired a quick controlled pair into the target. With the large ocular lens and low magnification setting mixed with the bright illumination setting, I was able to treat this scope very much like a red dot sight. 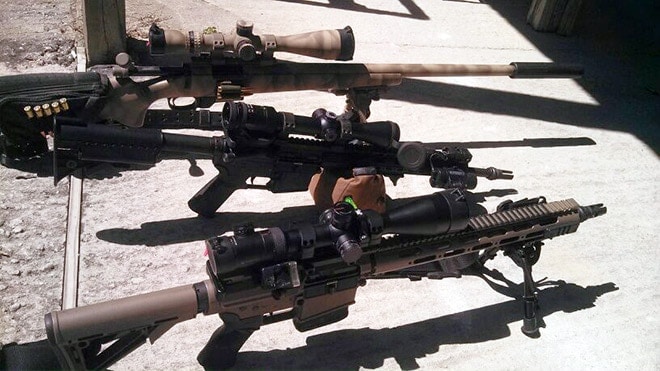 I found it amazing that I could switch from a 10X scope that I could use for medium to long range shots and roll right into a platform that I could use so effectively up close. Even while shooting on the move it was very much like using any of the 1X red dot sights on the market. This style of shooting is often done with both eyes open for maximum situational awareness. This feat is sometimes awkward with a magnified optic. The Meopta R2, being so close to 1X took away any awkwardness in shooting on the move with both eyes open.

Clarity of the glass, function of the turrets, being able to reset the turret back to zero, smooth transition between magnification ranges, and the awesome illuminated reticle feature, definitely make this scope the complete package. It breaks my heart to have to box this back up and send it back. However, it will be a temporary separation, as it will be the next optic that will be added to my collection. We will be reunited soon!