SureFire makes great gear.  I’m especially fond of their lights.  They’re some of the most rugged and dependable lights available.  We had a Scout Light in for review last fall, and we put it up against a couple of other lights designed specifically for shotguns, and it performed very well.  Their new X300 Ultra is even brighter, and much easier to use on pistols.

The X300 is unique in two ways.  The first is most notable when the light is on.  The X300 puts out 500 lumens, which is a tremendous amount of light.  This insane beam is generated by an LED, which is the absolute standard now for flashlights.  The LED bulb has a very long life, is difficult to break during normal usage, and doesn’t get as hot as old-fashioned bulbs.

The second feature of the X300 is the side-by-side battery compartment.  The x300 needs two 123A batteries to produce that staggering spot.  Most lights put them in line, but not SureFire.  The result is a wide light.  It will be wider than most guns.  This will make holstering the X300 a challenge. 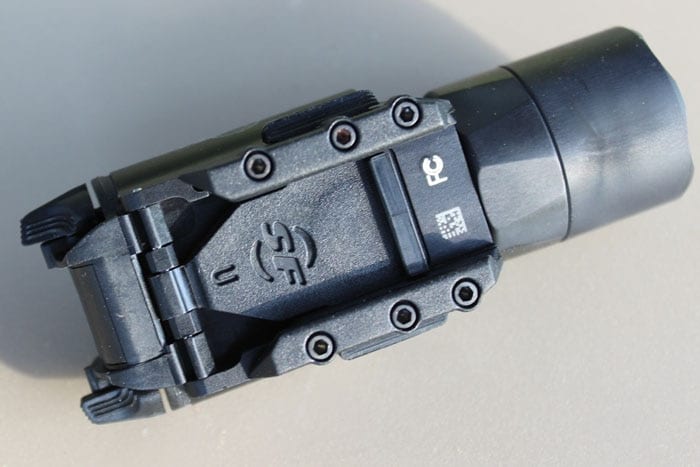 The X300 measures 3.6 inches long and 1.3 inches wide.  With batteries, the X300 weighs 4 ounces.  The two 123A batteries will run the X300 for an hour and a half.  If you use the light judiscuoisly, that is a long run time.  Otherwise keep some spare batteries with you.

The light is fully ambidextrous.  The toggle switch is right at the tip of your index finger (or where your finger should be if it isn’t on the trigger).  Switching off is just as easy, and can be done with the same finger, or with the thumb on the support hand.

The light comes with a solid rail mount and a spring loaded clip.  It slides on, catches firmly, and holds through anything.  Not tools required.

We put the SureFire on a Glock 20, which has an intense kick.  The 10mm is hot.  Recoil is intense, and the Glock is snappy.  The Glock 20 is, in my opinion, the practical limit for a service pistol.  If the X300 can withstand the recoil and shock generated by the Glock 20, than it passes my test. 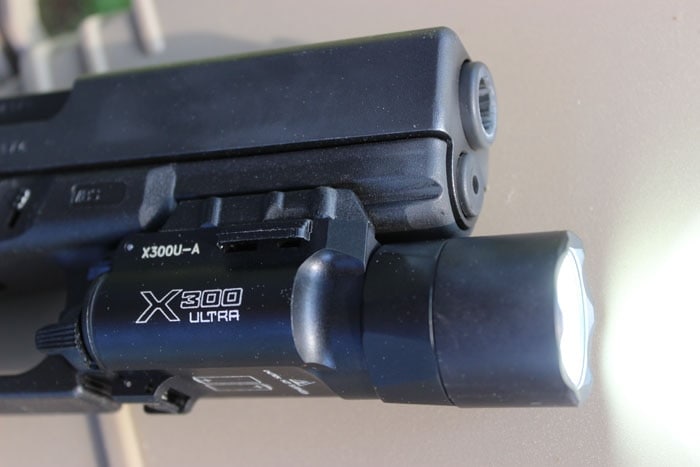 And it does.  I’ve shot some lights that will go dark when the gun fires, if only momentarily.  Not the SureFire.  In absolute darkness, the light will illuminate the smoke from the fired round.  This happens with any light, but it is something you should anticipate.  With 500 lumens washing through the white smoke, a shooter can go momentarily blind.

I like the spot.  The beam is narrow.  It is an excellent point shooting tool.  Surrounding the bright center beam is a more diffuse wash that helps with peripheral vision. 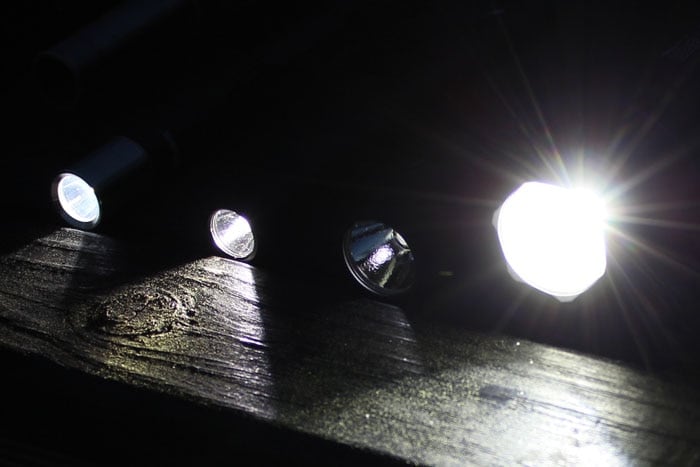 But the blinding aspect of the light can be a problem for the shooter.  There are some that feel like 500 lumens is overkill.  I think it depends on the light’s intended application.  I would have to modify my tactics to use the SureFire X300 in confined indoor spaces.  I ran the light in my house, for example.  The light, when actuated in close inside spaces, reflects off the walls.  The wash of white was too blinding.  You want to blind an assailant, but not yourself. 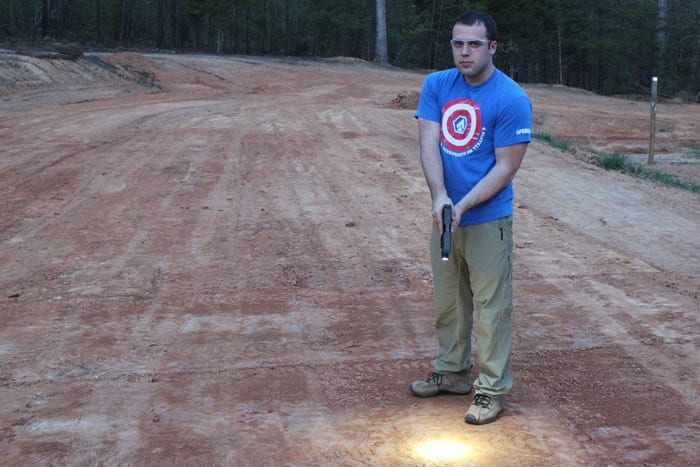 But the SureFire is perfect for outside.  This would be the ideal light for Border Patrol, National Park Service, even many LEO applications.  And it would be great for military applications.  I think it is a fine choice for home defense, also, but I’d be even more compulsive about keeping a secondary light on hand.  That way, you can use a lower level of light for clearing rooms and use the big beam of the X300 when engaging a threat. 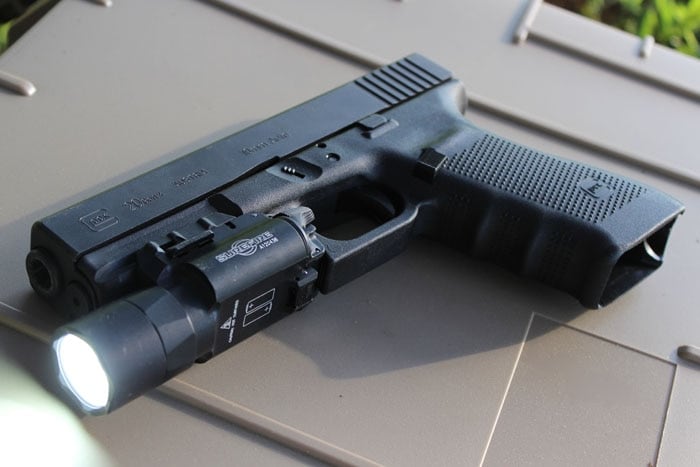 Yet is is really powerful, and exceptionally rugged.  And the light alone can be used as a weapon.  500 lumens is enough to actually blind someone, momentarily.  I know.  I shot the photos and videos for this review.  We had the Glock unloaded and clear, and checked by the range officer, so I could take some pictures from the business end of the gun, and I dipped, just once, directly into the light.  As it was pitch black out, I completely lost all of my equilibrium.  Don’t try it at home.

The SureFire X300 on the Glock 20, or any other full sized railed pistol, is a great combination.  It would be just as useful on the side rail of an AR.  It is an ideal, hands free approach to lighting.  As part of a complete package, one that would include a hand held light, the X300 may be the best bright light available.

MSRP on the X300 is $299.  Factor in some expense for batteries, as they will need to be changed out regularly — especially if you practice much. 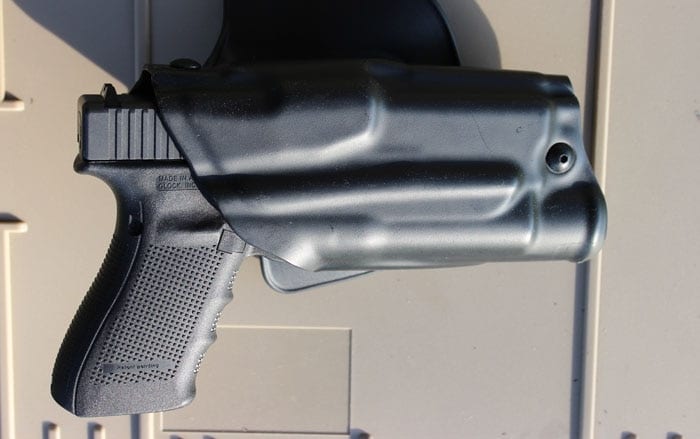 And consider the holster options, too.  We have a Safariland ALS built for the Glock 20 and the SureFire X300.  It is the perfect duty holster.  But more on that tomorrow.

In the meantime, check out SureFire’s lights and see what you’re missing.