Gun Review: A critical look at the Taurus Curve .380 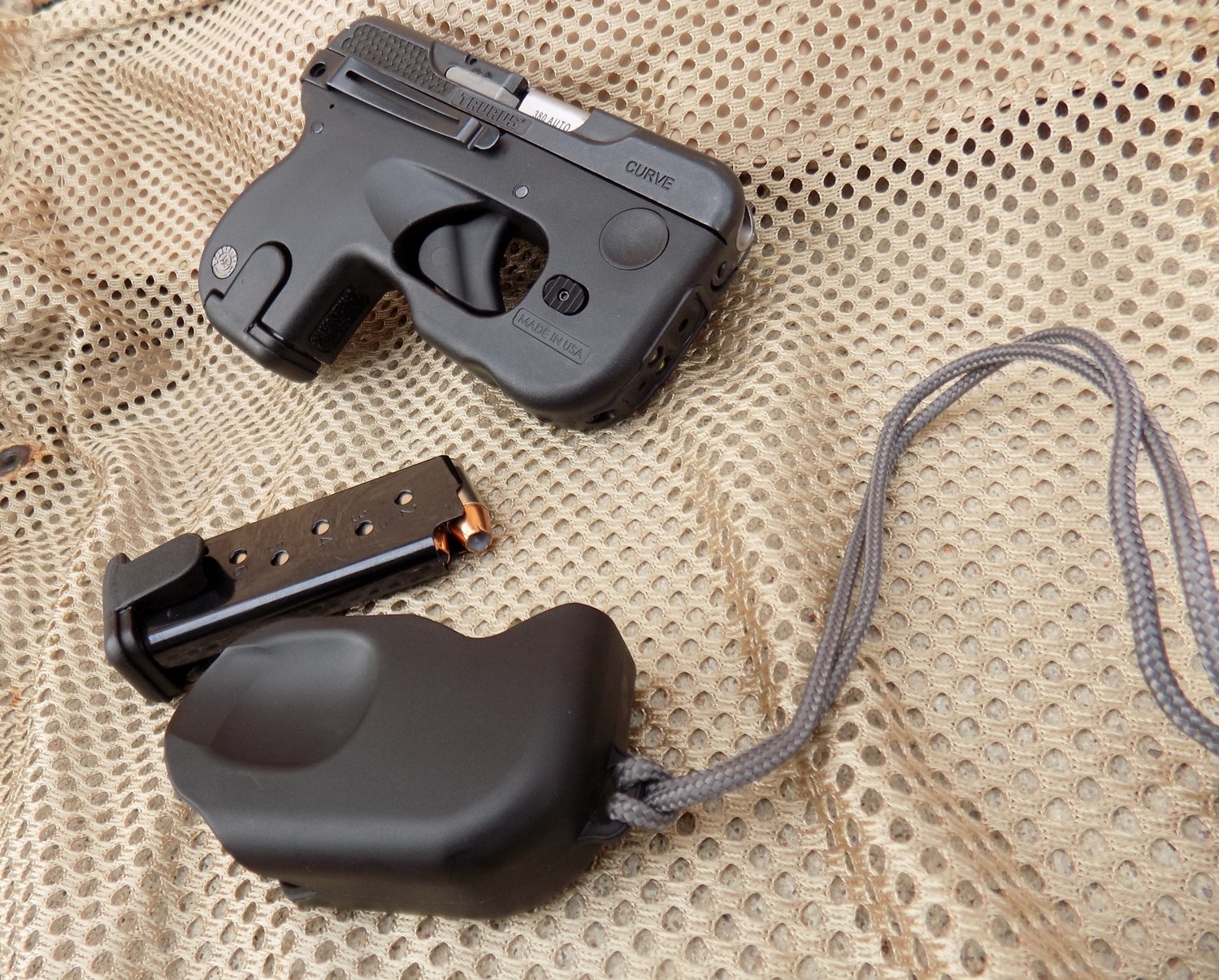 The Taurus Curve is a well-rounded package, coming with two six-shot magazines and a trigger shield for immediate use—if need be. (Photo: Terril James Hebert)

Thirty years ago, if you wanted a reliable pocket gun, a small .38 Special revolver was the end all and be all unless you wanted to take a gamble on an older, yet well-made .25 ACP.

Anything less seemed unreliable. But, times have changed. The .25 is mostly dead and .38 revolvers have taken a backseat to new, more reliable automatics.

Guns like the Ruger LCP, the Seecamp and Smith & Wesson Bodyguard epitomize the balance of compactness, power and reliability. And then Taurus upped its game by trying to advance the concept of a pocket gun with the Taurus Curve 380.

Fully loaded at 13.6 ounces and measuring in at only five inches long, the Taurus Curve qualifies as a pocket gun. The pistol is chambered for .380 ACP, a round that nearly equals the power of standard .38 Special loads. With its six-shot detachable magazines, the reloading aspect is somewhat faster than breaking open a revolver to initiate the reload.

Like others of its class, the Curve has a polymer frame and steel slide. Right away, the complete lack of snag hazards grabbed me by the lapels. The pistol wears no sights and the only obvious high point is the loaded chamber indicator just behind the breech. What Taurus does to make up for sights is a painted crosshair on the back of the receiver where the shrouded hammer rides.

The Curve may appear featureless, but it has a bit more going on.  The pistol is equipped with an integral Laserlyte combination laser and light housed forward of the triggerguard. The system is powered by 357 batteries and is activated by a knurled button on the right side of the pistol.

The barrel is cut awkwardly and rounded off to conform to the rounded slide. The grip of the pistol, like so many other pocket guns, is only good for a two-finger grip below the triggerguard, but the stippling on the backstrap and front strap of grip is a smart move. 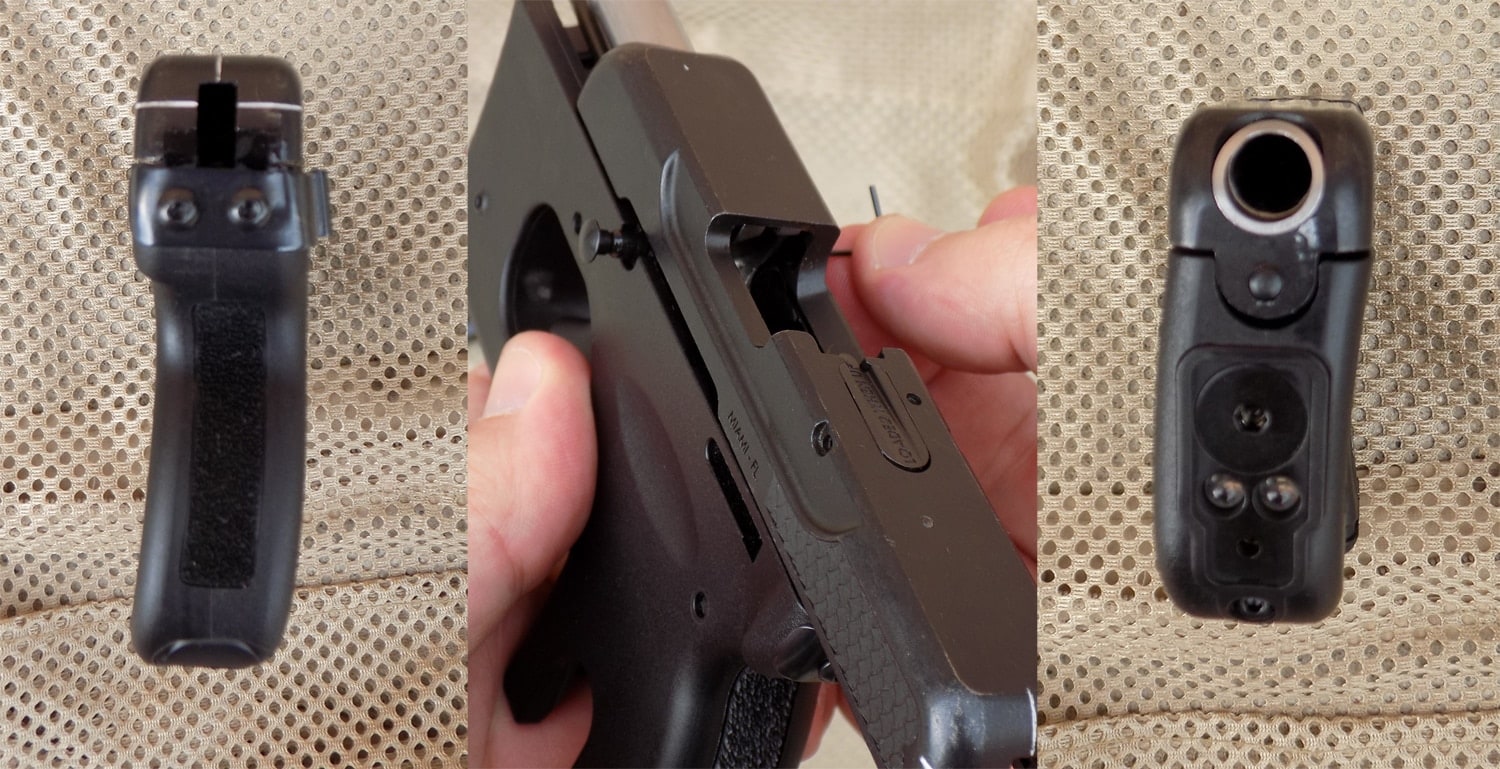 The barrel is cut an awkward angle. This would normally lead to bullets that tumble, but this did not occur. The rifling is squared off and recessed. The slide gets to keep its rounded profile and the gun is still quite accurate. (Photo: Terril James Hebert)

Unlike other guns in its class, the Curve comes equipped with a detachable belt hook and a trigger sheath so you can carry the gun right out of the box. You also get two magazines, instead of the usual single magazine come with lower-priced “economical” options. The magazines are unique in that the polymer baseplate forms a lip that catches on the inside of the grip. The magazines are released by pinching that base and pulling the magazine free.

Operationally, the Curve has a Browning-style locked breech system that mates the barrel to the slide when the gun is in battery and ready to fire. The pistol has no manual safety and relies on a long, double-action type trigger pull to fire the weapon.

This is typical of many new .380 autoloaders, but one feature stands out—the curve. The grip-frame is curved out to the right-side.  This was intended to allow for the gun to be comfortably carried without discomfort or printing through clothing. I will give a clap to Taurus for realizing that the human body is curved and flat autoloaders just don’t cut it sometimes. Taurus—to their credit—thinks outside the box. But for Taurus owners, some pistols are a swing and a miss. Through nearly 400 rounds at the range, I found the Curve to be a near-miss.

Eating the ammo of death

On a cold spring day, I set out with the Taurus Curve and 150 rounds of Tul-Ammo .380 FMJ ammunition. This ammunition is steel cased and is known for having ignition problems due to hard primers. If this gun was going to choke, this had to be the ammo to do it.

Loading the two provided six-round magazines were buttery smooth with no issues. The springs gave good, but not firm resistance to being loaded to full capacity. Unlike most blowback .380s, the Curve doesn’t take much effort to rack, but the lack of material to grip is dicey. The swirling mill marks on the slide allow for a relatively good grip on what is a relatively slick, featureless surface. 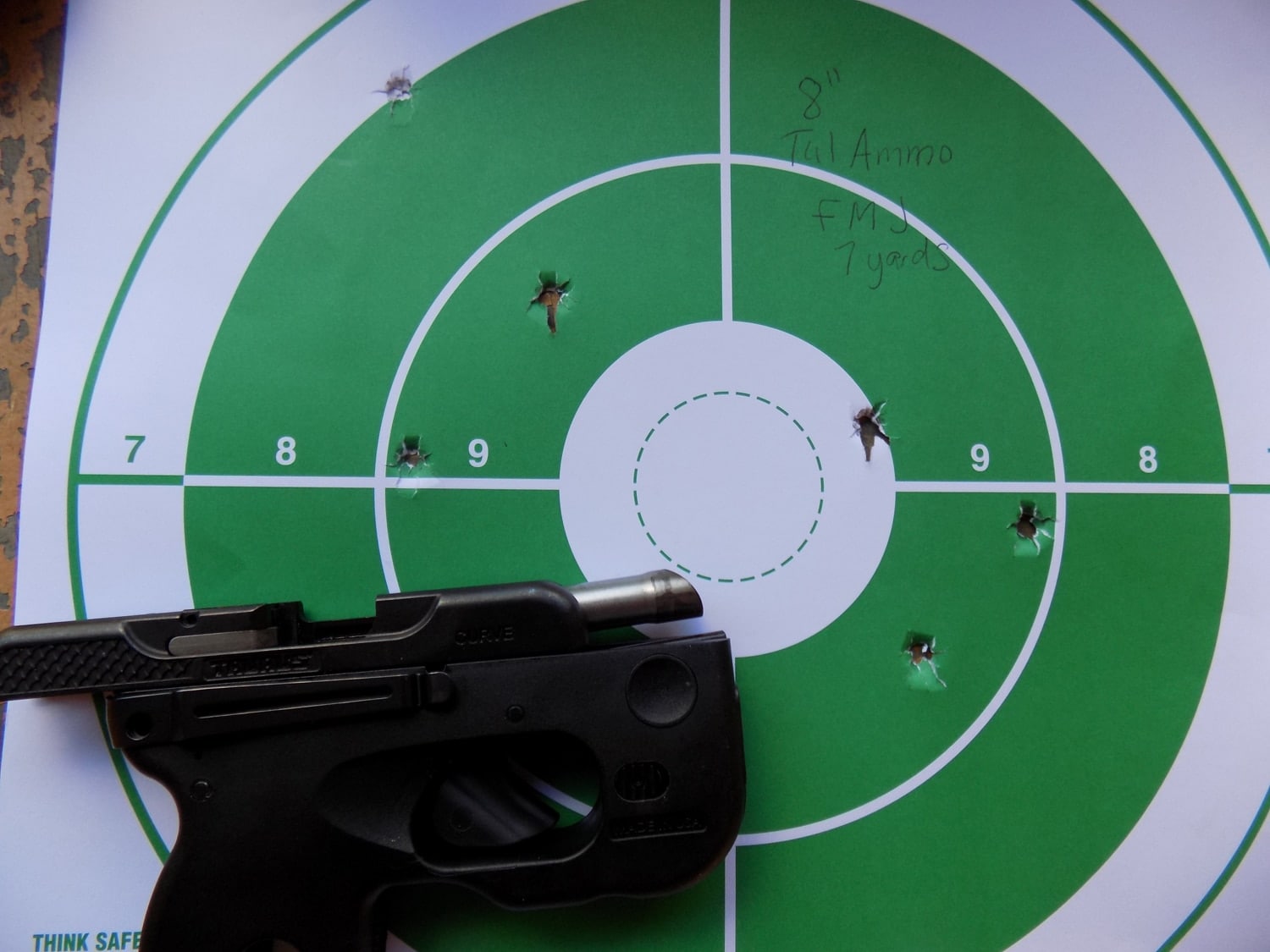 A typical group posted with the Curve. While you won’t be competing in postal matches with it, the gun is surprisingly accurate for what it is. (Photo: Terril James Hebert)

With daylight shining, it made no sense to use the laser, so I took aim without it. But I was conflicted.

The white crosshairs are stuck square in the middle of the slide, not on the top like real sights. It felt unnatural and the receiver covered up a good bit of that 12-inch bullseye target posted at seven yards.

I looked over the top of the barrel and saw the loaded chamber indicator—forked in appearance—sticking up in the middle of my sight picture. So, I used that as my sight.

I pulled back the trigger, which felt somewhat mechanical, but smooth with a relatively light release despite it being quite long. The take-up was very predictable and I cranked it right to breaking point and fired again and again. All I got were holes in the target. No malfunctions of any kind right out of the factory grease.

I ended up leaving the range, having expended all rounds without any malfunction. The web of my hand was a little red, but recoil wasn’t so much as to be unpleasant. Though the pistol lacked a full grip, the way it is stippled helped greatly with recoil management.

The pistol didn’t jump out of my hand in the least. The fact that the Curve has a locked breech, over a standard blowback action the .380 is designed around, helps absorb recoil considerably.  Having a heavy slide beating back violently, rubbing your hand with every pass isn’t pleasant. I did not experience that with the Curve.

The gun’s oddly offset grip produced no consequential discomfort or awkwardness. It gripped like a normal pistol and it shot like one, too.

I managed good, semi-rapid one-handed groups at seven yards with my best group coming in at eight inches, but a solid 12-inch group was most typical. Is that good? The FBI has been telling us for years that, statistically, the average distance of a self-defense encounter is seven yards. So, yes, the Curve can put the bullets on target—even without real sights.

I was satisfied with the Curve. I took it home and cleaned it thoroughly, but no one is really satisfied with shooting cheap, full metal jacket ammo. Hollow-points, with their flattened shapes, don’t feed well in some pistols. 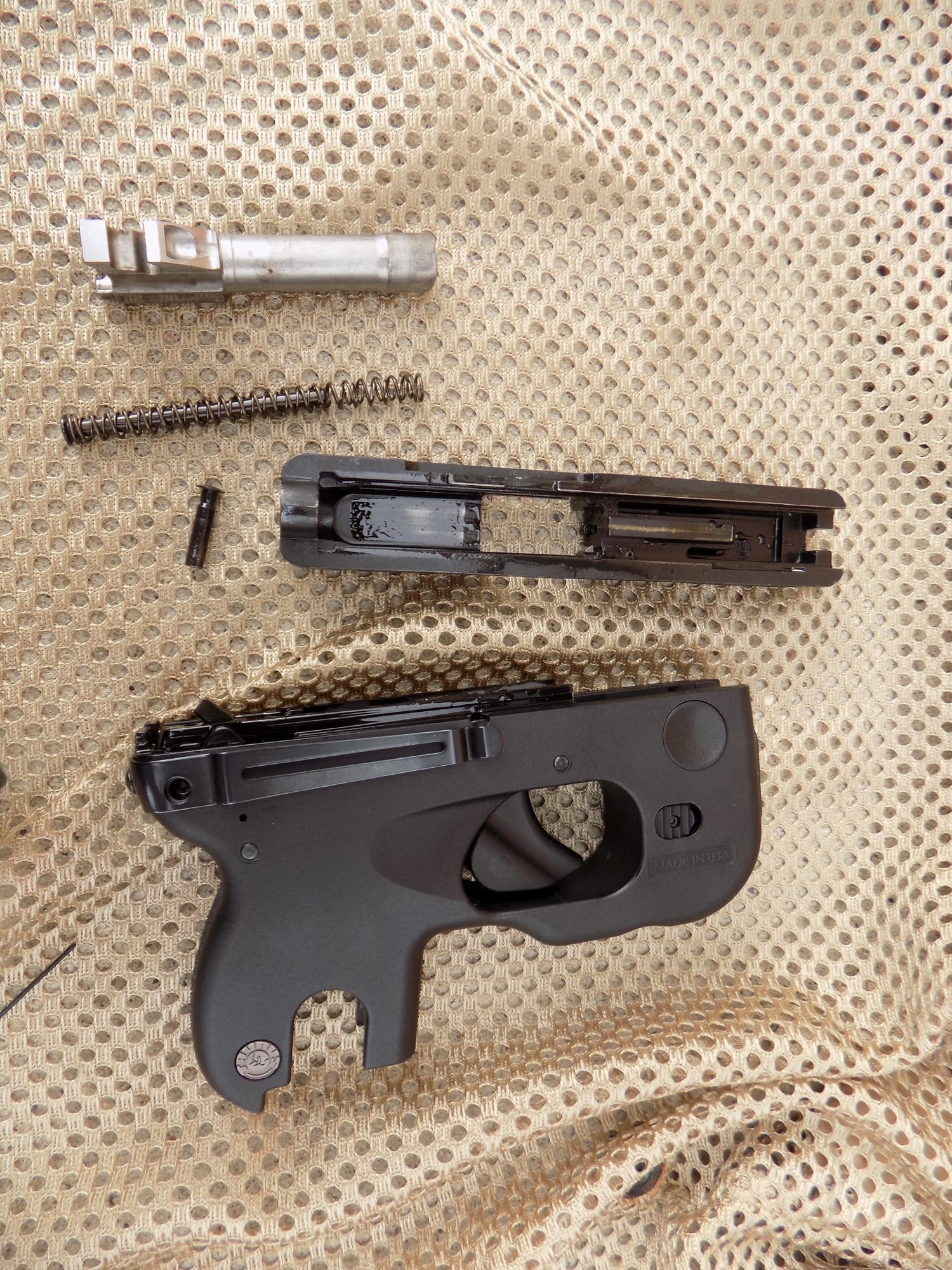 On the range, I focused primarily on getting rounds out of the gun, reloading, and doing it again in what I call my “mag” dump tests. Accuracy takes a backseat to function and in this the Curve fails.

Right away, the Sig ammunition gave me a stovepipe jam. One round from the Federal Hydroshocks failed to feed from the magazine into the chamber. The next 150 rounds were nightmarish, but not because of jammed rounds, but light strikes.

Between one to three rounds of every string of six shots was a light strike. The hammer came back, flew forward, striking the primer of the cartridge, but the cartridge did not fire. The primer dent was quite small on these and one might chalk this up to the ammunition, but all ammunition used suffered this problem.

Light strikes are especially a big deal in the Taurus Curve because the gun doesn’t have a true double-action only trigger. The hammer is preset and once it fires, the slide must go backwards to reset the slide. You can’t pull the trigger again and get the hammer to strike the round a second time. So, I spent half my time clearing jams.

I held onto the Curve for quite a while. After it shot through a few magazines of ball ammunition after a good cleaning, I was feeling a little more optimistic. I decided to take the pistol to Spring Guns and Ammo to test the light and laser capability and see if there was a silver lining to this pistol. Perhaps all the fuss really was the break-in period?

The pistol was stoked with the same exact brands as before, but I put my index finger forward and pushed the button that activated the light/laser. I could see it and use it in this dimmer environment. The light illuminated the torso target at seven yards very brilliantly and the red laser looked menacing, though I was sure it was off. The gun’s laser can be zeroed with the help of an included allen wrench to fix elevation and windage to get to point of aim. I did not zero the laser.

At this point, 300 rounds in, I wanted to see the Curve run with ammunition you and I may stoke in the gun to save lives. The same problems dogged the Curve as before.

Stovepipe jams happened, but the ever present and unpredictable light strikes kept on coming regardless of ammunition used. Worse, the laser system completely shut off after a few rounds of fire. The recoil must have jarred the laser back to its off position. But I needed it to aim effectively for the test. I pushed on the button hard and it came back, but not for long.

After the first magazine, the light had also shut off on its own under recoil. Nearly four hundred rounds in, the Curve should have surpassed any break-in period. But the issues only seemed to amplify. 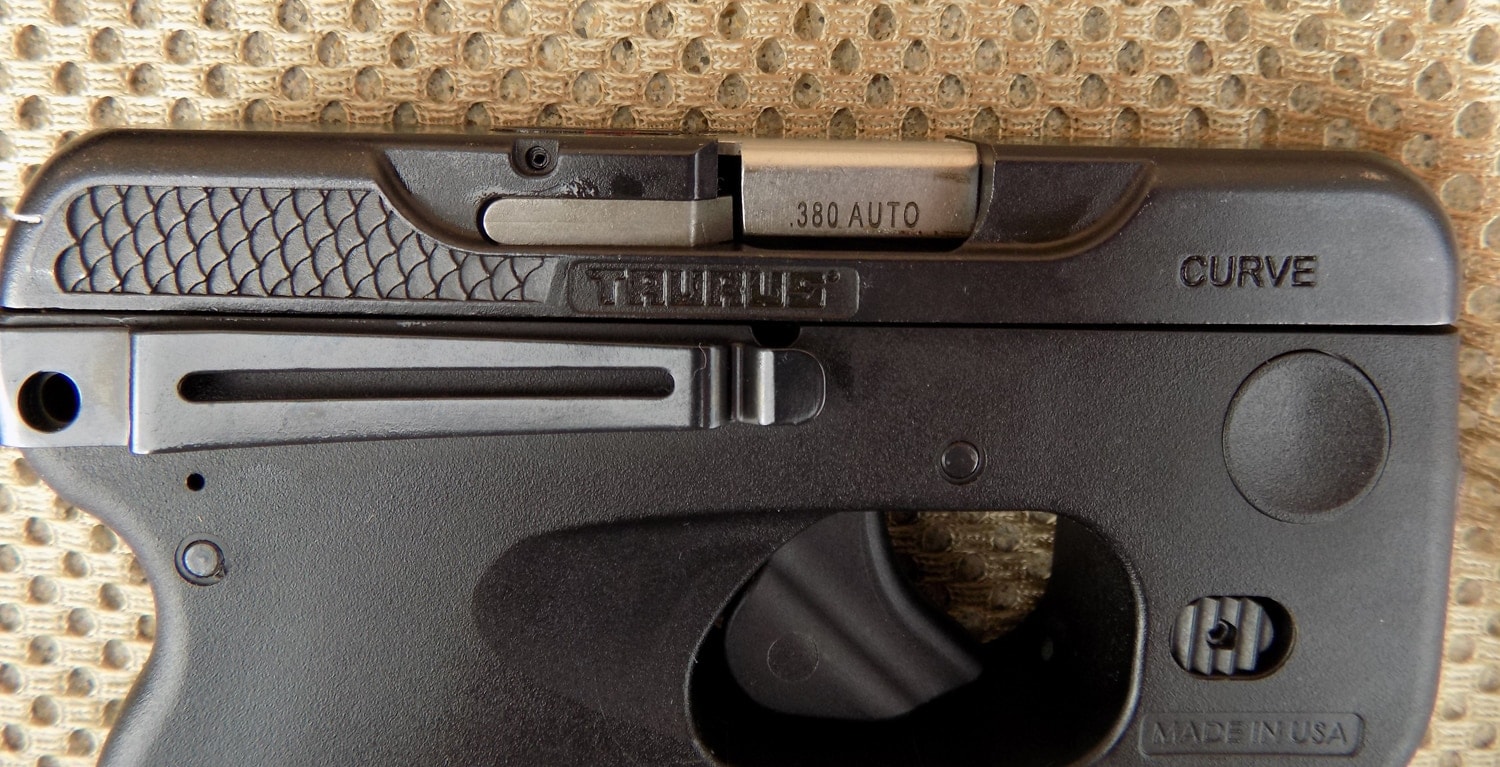 The Curve is as barebones as they come. Check out the sights—there aren’t any, really. The white crosshair “sight” to be unnatural and useless. This gun is designed for point-blank shooting. (Photo: Terril James Hebert)

I admit being relatively new to Taurus and their firearms. Putting hundreds of rounds through their flagship gun—the Model 85—left me with a very optimistic view. Though not nearly as refined as other revolvers that I am partial to, the M85 is a great buy and one I can stake my life on. The Curve is no such thing.

On the outside, the gun utilized a new and bright concept and combined it with what we really need in a carry gun in a well machined, well fitted package. But the gun doesn’t function well enough, despite the promising start. I look forward to Taurus perfecting the concept, but for now, it is off my list.