The Baikal MP 94 can be the solution to uncertainty when you’re out on a hunting trip. We’ve all been there. Your deer hunt has been a bust. You’ve spent the better part of a day in blind or tree stand looking at the same inactive patch of woods and you’re bored, tired and cold. The deer just aren’t moving so you call it quits. 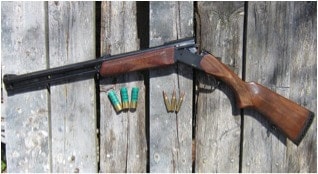 On the walk home, a cottontail rabbit darts out in front of you and pauses at a range of about 15 yards. While it would be nice to take home a delicious rabbit instead of a bit fat bag of nothing, you know that your deer rifle stands a good chance of vaporizing the hapless critter, so you pass on the shot.

While some big game hunters will carry a rimfire pistol to pull small game duty in addition to their primary rifles, that’s not a viable fix for hunters such as myself who are embarrassingly bad handgun shots. Seriously, I would stand a better chance of killing a bird or rabbit with a handgun if I just threw it at the critter. For me, the solution to mixed bag, small and big game hunting came in the form of the Baikal MP 94 over and under combination rifle/shotgun. 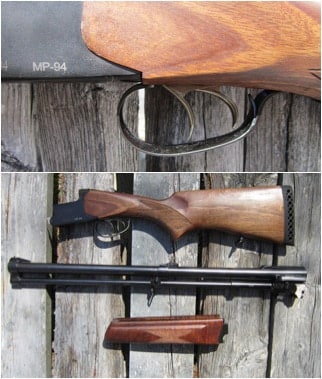 Manufactured in Russia by Baikal Arms and imported by U.S. Sporting Goods, the MP 94 sports a 24 inch 12-gauge shotgun barrel over a .308 Winchester rifle barrel. Other variations of the gun pair a 12-gauge barrel with rifle barrels in .223, .30-06, and 7.62x39mm. Additionally, smaller scale models are available that pair a .410 barrel with barrels in various rimfire chamberings.

The gun’s overall length is a compact 40 inches and it takes down quickly in a manner similar to an over/under shotgun for cleaning and transport. Fit and finish of the gun’s walnut stock and blued steel parts are decent for a gun of its price and it balances and points naturally. It’s clearly a gun made for offhand shooting.

I recently had a chance to give the MP 94 an initial if somewhat informal range trial. I brought with me a sampler of various shot, slug and .308 loads, just to begin to get an idea of what types of ammo the gun prefers. I have not yet chosen a scope for the gun, so I used the range session as an opportunity to evaluate the open sights.

At 15 yards, a 1.25 ounce load of birdshot through the modified choke tube produced a nice, even pattern on a piece of 14×22-inch poster board. This would be more than adequate to take a grouse, rabbit or squirrel encountered on the walk home after a day in a deer stand.

I was also curious to see how the gun patterned buckshot, so I fired two rounds of Remington, three-inch, size 00, buckshot through both the modified and full choke tubes at 25 yards. While the pattern yielded by the full choke was somewhat smaller overall than that produced by the modified tube, the full choke resulted in more pellets completely missing the poster board. Twelve out of 15 pellets struck the target through the full tube, while 14 out of 15 pellets hit the target when the modified tube was used. Neither tube yielded a pattern that I would call sufficient for deer hunting.

Next, I moved my targets to the 50-yard line to test both the .308 barrel as well as to see how capable the shotgun barrel was of grouping slug loads. The three loads tested at 50 yards were Silver Bear, 147 grain FMJ, Remington 150 grain soft points and three-inch Remington one ounce Sluggers. 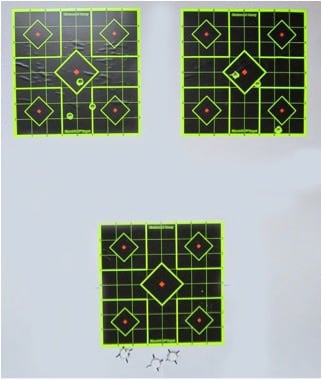 Upon firing from the bench, the gun’s two biggest shortcomings became apparent. First, the triggers are tough. I don’t have a scale and am thus unable to provide numbers, but both the shotgun and rifle triggers required the use of a significant amount of muscle before they would break.

Second, I found the stock sights—a small front bead and shallow rear notch—somewhat difficult to line up and the tall rear sight blade obscured much of the target. With practice I’m sure I could learn to shoot accurately out to 100 yards using the open sights, but it’s likely they will be difficult to see in low light conditions such as those found in the deer woods just before sunrise. I will probably mount an optic prior to the arrival of deer season.

In spite of the above potential areas for improvement—and the fact that my shooting skills got a little rusty over the winter—I was able to produce deer-capable groups with all of the tested ammo. The gun grouped best with the Silver Bear, clustering three shots into 2.5 inches. With the Remington soft points, I was able to put two rounds into the center of the target within two inches of each other, but a third round was a flyer making the overall group approximately 4.5 inches wide. This large group was very possibly the result of shooter error (as I said, I’m a bit rusty).

The surprise group of the day came from the three-inch Sluggers. While the slugs expectedly hit low compared to the .308 bullets, I did manage to group three shots into a 3.5-inch long horizontal line. It is a little ironic that slugs fired from a smooth bore outshot a brand of rifle ammo at the same distance.

While adding an optic to the MP 94 will likely improve groups significantly, the gun will probably never be a laser accurate, long range, tack-driver and that’s fine with me. What I need is a multi-purpose gun that capable of ethically taking all manner of woodland game at the close and medium ranges found in the forests of Northern New England. For this application, the MP 94 fills the bill nicely.