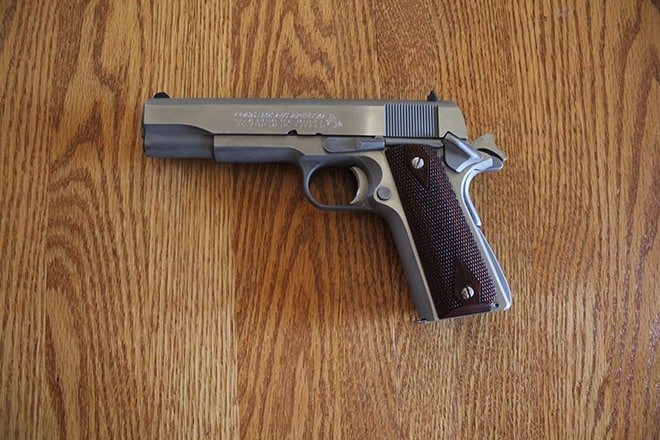 Perhaps the most iconic handgun of all time is the Colt M1911A—semi-automatic .45ACP sidearm that served with distinction in the U.S Armed Forces from World War II until the mid-1980s. Today however it has been largely replaced in both militaries and on the civilian market by updated 1911s featuring extended grips, thumb safeties, skeleton hammers, raised sights, and front tactical serrations (often bearing more of a resemblance to the original M1911 produced before the M1911A1). On the surface, this may suggest that the original M1911A is a relic of the past, though this is not strictly true. 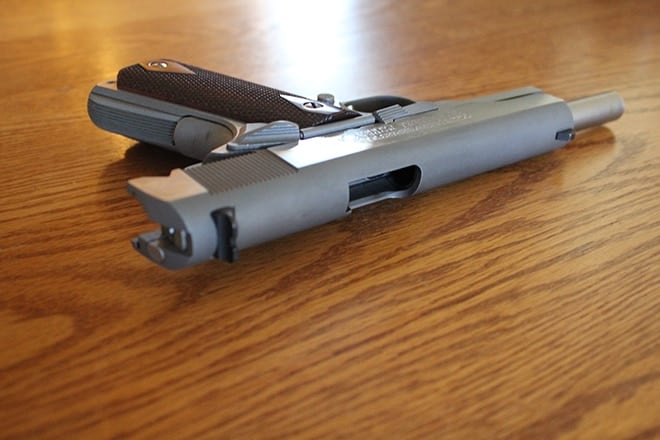 There are a few clones of the original M1911A1 produced today with an arched mainspring housing, short trigger, small sights, G.I style hammer, and a standard grip and thumb safety.  None of them, in my opinion, come close in quality or attention to detail as the Colt Mark IV Series 70 reproduction pistol.  In fact, other than a precious few deviations, the M1911A1 and the Series 70 are practically the same firearm.

The story goes that many decades ago Colt sold the M1911A1 to civilians as the “Colt Government Model,” a name that still exists today on many Colt 1911s.  After a few years of that run, Colt redesigned the barrel bushing in an attempt to improve accuracy. The resulting Colt Government Model was officially termed the “Colt Mark IV Series 70.” 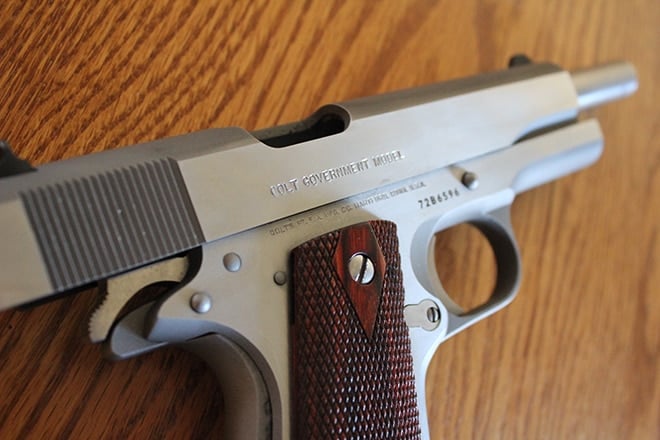 Then next major design came in 1983 with the Colt Mark IV Series 80.  On this model, Colt added a safety feature in the form of a firing pin block system that made it impossible for the weapon to discharge if dropped or thrown on a hard surface.  The new Colt Series 80 also incorporated the new barrel bushing of the Series 70, while being more reminiscent of the original M1911 by having a long trigger and flat mainspring housing.

The Series 80 was a monstrous success on both the commercial and military/law enforcement markets and promptly replaced the Series 70.  The design spread to virtually every other manufacturer of 1911 as well, until almost all of the 1911s being sold on the market, regardless of manufacturer, could trace themselves to a Series 80 design.  Even today whilst the Series 70 has been making a comeback, the overwhelming majority of 1911s sold are a Series 80 variant.  I guess people are just drawn to the idea of having a 1911 that can simply not fire unless the trigger is depressed. 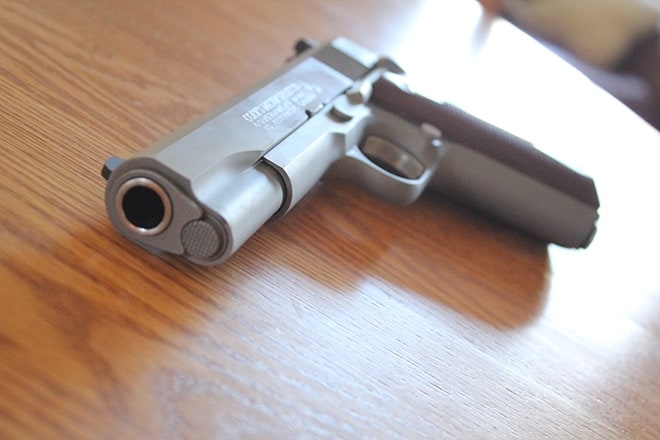 Nonetheless, the Series 80 is by no means a flawless design.  As a result of more components in the gun, the trigger is undeniably harder to pull.  Granted, that’s not to say it’s a bad pull (since any single action 1911 trigger pull is desirable) but it is slightly rougher than the Series 70.  Many also feel that those same components simply means more moving parts and an increased potential to fail.

The Series 80 may have been here to stay, but that didn’t mean that the Series 70 was out.  Listening to the demands of customers, Colt revived the Series 70 as the “Colt’s Mark IV Series 70 Reproduction, the exact same gun you see pictured here.  In 1988, Colt got rid of the change to the barrel bushing, so the result is that this Colt Series 70 is essentially a modern reproduction of the first Colt Government Model—in military terms, the M1911A1. 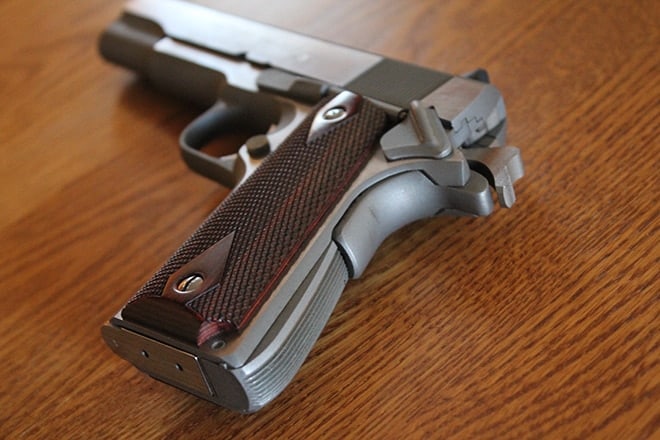 At first glance, the Series 70 and M1911A1 are seemingly identical aside from the finishes.  The original M1911A1 utilized a dull grey parkerized finish while the Series 70 reproductions are offered in blue or stainless steel.  While the blued finish on any Colt 1911 is nothing short of beautiful, functionality wise I definitely prefer the stainless on this model because I find it’s far more resistant to rust and corrosion and therefore more suitable for duty or outdoor use.

Plus, the stainless steel finish on this Series 70 is not just functional, it’s stunning.  When nicely polished on the sides, it shines under the light. Pair that with some gorgeous rosewood grips and the Series 70 is a pretty much a universally appealing handgun. 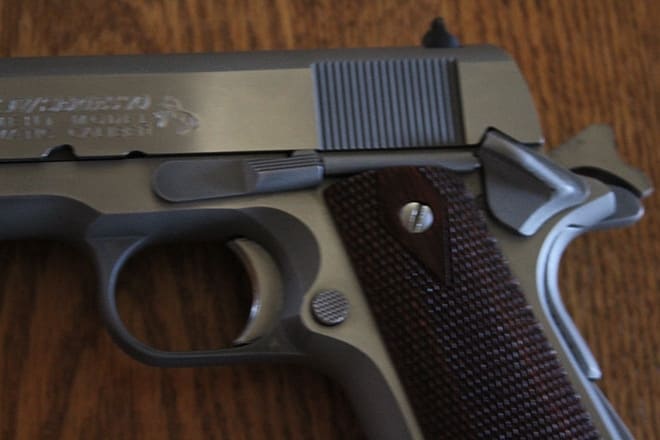 One strange choice, to me at least, is that the finish on the top of the slide and bottom part of the frame on the gun are a matte stainless rather than a polished stainless.  It’s not a huge deal, but I would prefer that the entire gun to be polished like it is on the sides; not only does it look better, I’ve noticed that the matte is more susceptible to scratches.

I’ve carried and used my Series 70 countless times in a leather holster while hunting and hiking, sometimes on very rainy days. Other than a few minor scratches—the kind you would expect from real world use—I can report that there is no significant surface damage or rust present anywhere whatsoever on this gun.  Plain and simple, the finishing job on the Series 70 is of the utmost quality both in terms of looks and functionality. 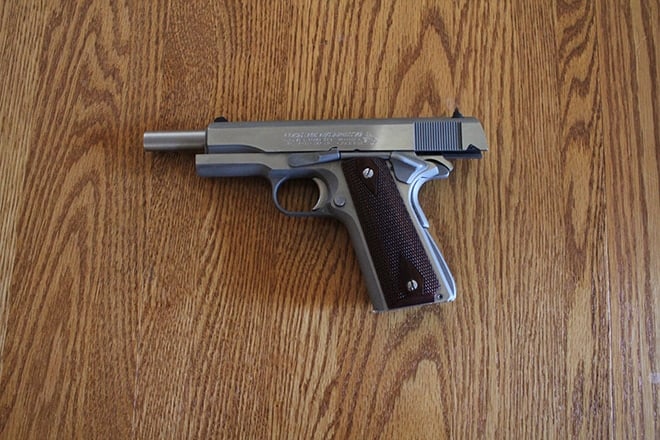 As with any 1911, the Series 70 is balanced perfectly and feels solid in the hand; indeed, one of the most appealing aspects of any 1911 is how natural the gun points.  The Series 70 is no exception.  It’s a fun gun to hold and aim with just as much as it is to shoot.

Operation is incredibly smooth across the board: no roughness whatsoever when racking the slide, cocking the hammer, flicking off the thumb safety, or when pulling the trigger.  This is a very desirable gun to operate, and that’s more important than the looks of the gun. 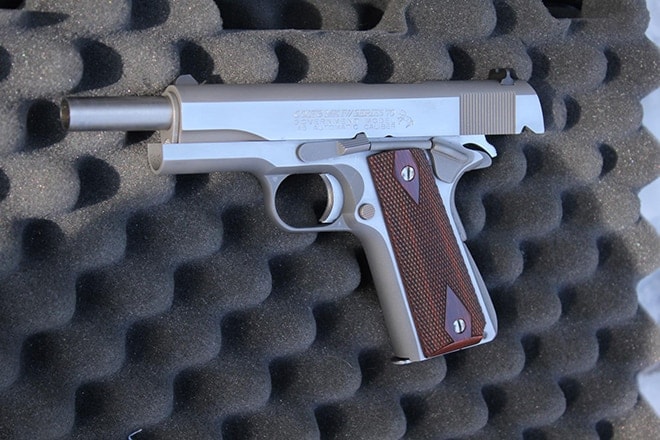 Touting the Colt Series 70 to the range. (Photo: Nicholas Oetken)

I have found reliability on the Series 70 to be excellent.  While it is widely held that 1911s require a break-in period, my Series 70 functioned flawlessly right out of the box during a session of over two hundred rounds of brass and steel cased .45 ACP 230 grain ammo.  This, combined with the stellar fit and finishing job on the gun, has me convinced it could be run as a duty gun if needed.

The Series 70’s biggest flaw—though in keeping in with the traditional M1911A1 pistol—is the sights.  They are the only part of the gun that is blued and they are also quite small with no white dots or any sort of indicator to make them pop.  It’s nothing that can’t be replaced or even remedied at home, but if you plan on using your Series 70 for serious work I would also plan on swapping out the sights. 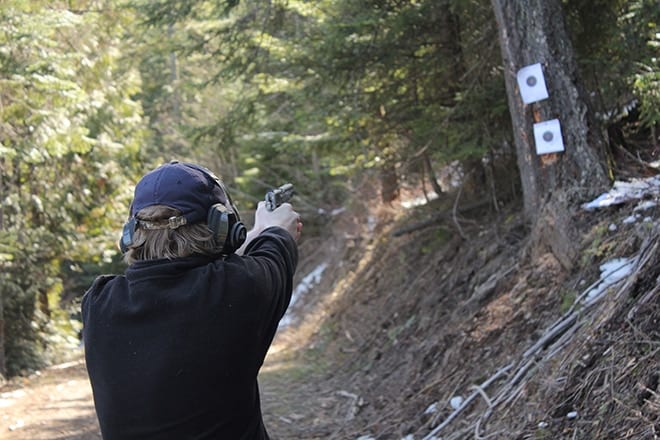 On the range with the Colt Mark IV Series 70 with surprising out of the box reliability. (Photo: Nicholas Oetken)

That being said, despite the under average sights, out of the box accuracy from the Series 70 was right on target.  I was putting rounds on paper every time with the Series 70 and very close to if not on the bulls eye with many of them.

In this owner’s estimate, Colt has scored a winner with the Mark IV Series 70 reproduction.  It successfully duplicates the original Government model while maintaining the smooth fit and finish, natural balance, and out of the box reliability and accuracy that you would expect from a duty pistol.  It’s definitely not a cheap gun, selling in the neighborhood of $900 or up, but it’s worth every penny.  If you’re a fan of the original classic M1911A1, the Colt Mark IV Series 70 is your by far your truest option out of the clones being produced today.