A Henry lever action with a drop-box magazine and a serious accuracy guarantee? 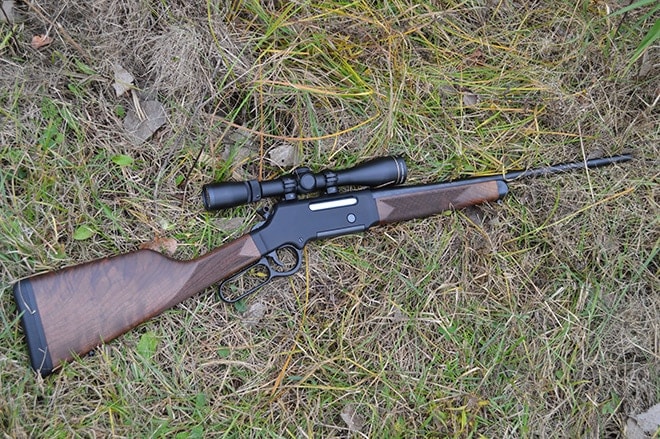 For its initial introduction, Henry is offering three chamberings: .223 Rem, .243 Win, and .308 Win.  Per President Anthony Imperato’s “Made in America or Not Made at All” motto, the Long Ranger, like most Henry big bores, is produced in Rice Lake, WI.  Built with a lightweight aerospace alloy receiver, forged steel lever and exposed hammer, the Long Ranger blends tradition with modernity. 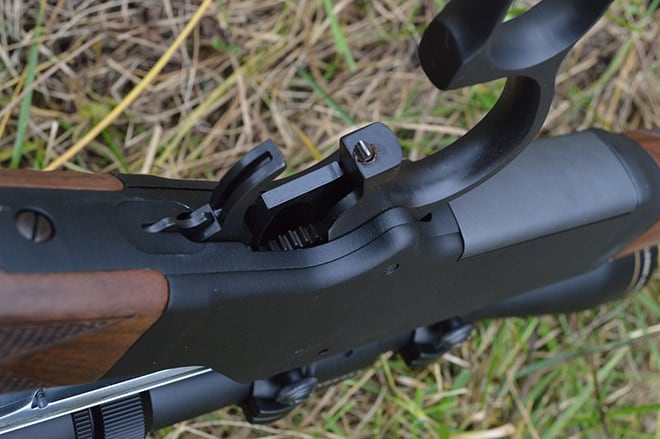 A geared action drives the machined and chromed bolt with its six-lug rotary head for consistent lock-up into the barrel extension, essentially making this a lever driven bolt gun.  A side ejection port is standard fare and makes the gun ideal for right-handers, but also very usable by lefties as well.  The top of the receiver is drilled and tapped for scope mounts, which are included, as is a hammer extension for easier access below a scope. 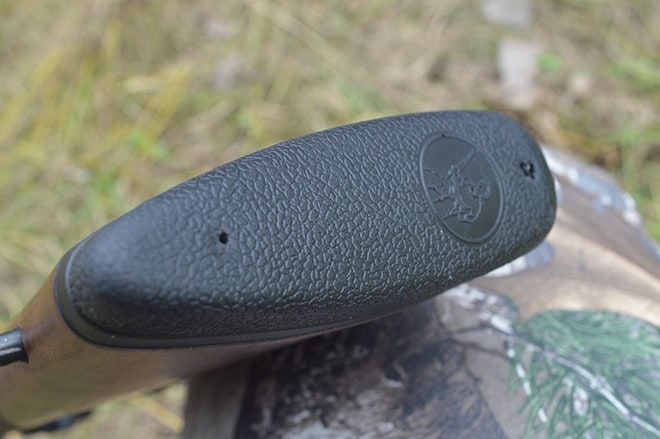 An in-hammer sliding transfer bar functions as a safety in lieu of a manual button or slider.  One steel-bodied, flush-fit detachable magazine is included, with four-to-five round capacity, depending on caliber. There are also the steel floorplate and blackened steel mag release button on the right of side of the receiver. 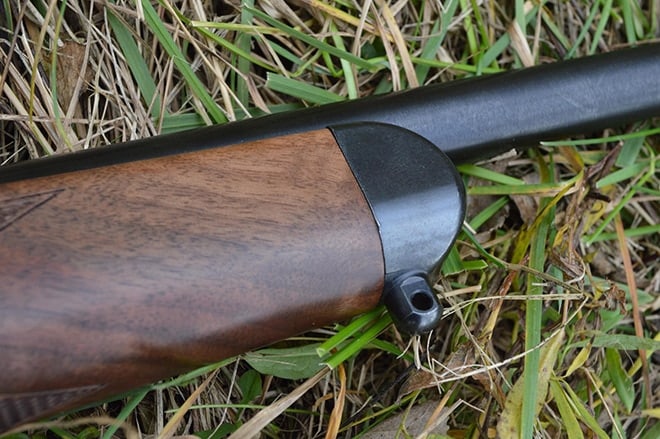 The 20-inch round, blued, free-floated barrel drives the accuracy of the rifle, which is all supported by a straight-grip, checkered, oil finished American Walnut stocks.  Though the stocks wear a low-glare finish ideal for serious hunters, the wood itself is nonetheless of high-grade.

Sling swivels are standard, and the solid black rubber recoil pad reduces the already light recoil from the trio of short action chamberings and stays put on the shoulder.  The Long Ranger weighs in right at seven pounds, sans optic and retails for $1014.95.

Does the Long Ranger remind you of anything? 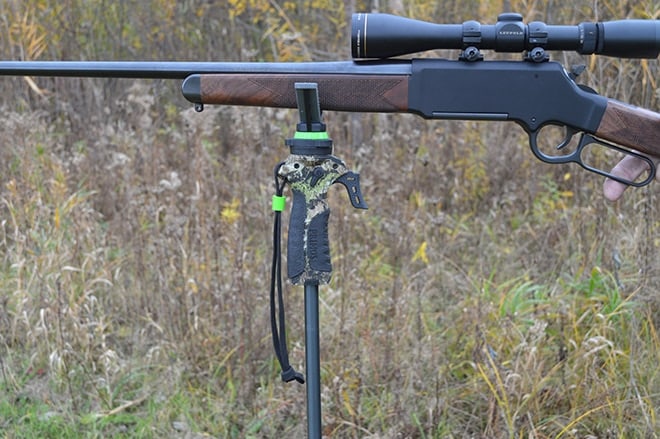 Those familiar with mag-loaded lever guns will immediately recognize the similarities between the Long Ranger and Browning’s BLR.

Upon closer inspection, it’s clear that Henry not only studied the BLR, but improved on it in their design efforts: the Long Rangers’ mag is flush with the base of the receiver, its lines are more traditional looking, it includes sling swivels, has a superior trigger that does not travel with the lever, sports a threaded rather than pressed-in barrel and offers overall simpler dis- and re-assembly. 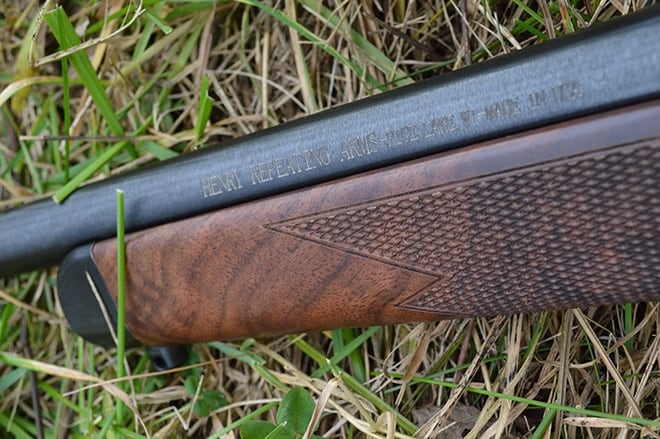 Though Henry includes Skinner Sights two-piece Weaver-style scope bases, the lack of iron sights will be a knock for some.  Just remember that the Long Ranger is indeed intended to be a true long range rifle.  To that end, the Long Ranger also carries some similarities to the Winchester 88, a once popular lever gun that has been out of production for decades.

The Winchester was called the “bolt action rifle with a lever” and Henry has picked up on that with the Long Ranger.  While the Long Ranger shares a resemblance to the BLR and the capabilities of the 88, it is still its own animal, one designed for serious cross-field shooting and built in the USA with premium American components.

Our test rifle came in the .243 chambering and holds four rounds in the mag, with one in the chamber. We spent significant range and field time with the Long Ranger, and the gun lives up to its hype as an accurate performer. 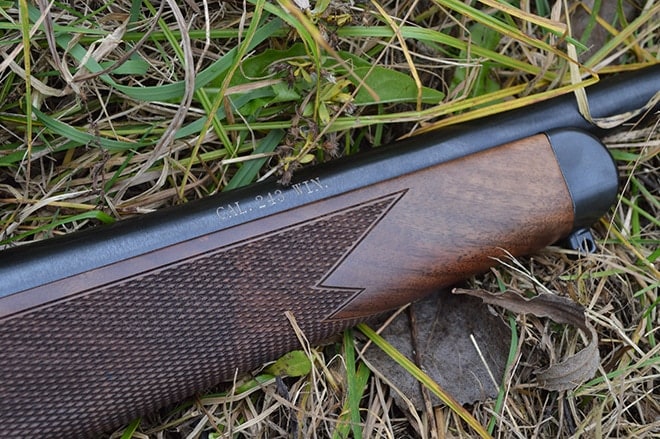 From a bench rest, we averaged 0.78” three-shot groups at 100 yards, with all ammo grouping sub MOA and the best group just a hair over a half-inch.  At 200 yards, three shot groups averaged 1.67” with the best group of 0.98”.  At 500 yards with an 8-10 mph crosswind, even inexperienced shooters could nail a 5” metal reactive target with regularity from the bench with disciplined shooters shooting repeatable centered groups. 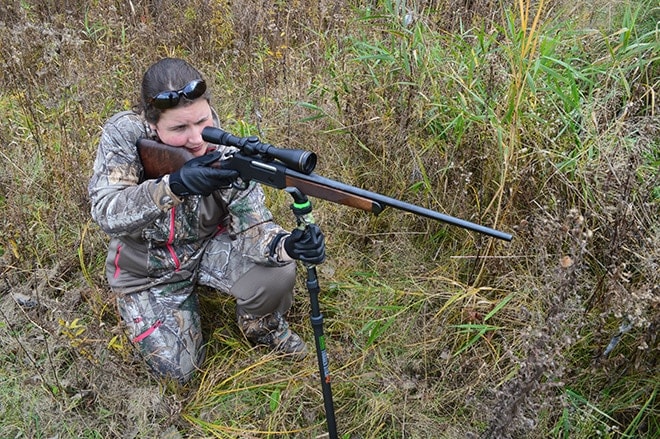 Confidence was high amongst all shooters, and coming in a .243, the Long Ranger would make as good a varmint gun with lighter bullets as it would a whitetail slayer across soybean fields with larger game rounds.  As with all the Henry guns we’ve run, the lever action is smooth and quick.  Fit and finish on the wood is excellent, and the buttstock wood has superb figure, making it some of the best grain we’ve seen on a standard production Henry.

A demand on any rifle calling itself a long range gun is that the trigger must be above average, and the Long Ranger satisfies.  Breaking at 3.95 pounds on a Lyman digital pull gauge, the trigger makes accurate shots at distance as possible as the capabilities of the shooter.  In a further thoughtful move by the company, Henry installed steel bushings for the sight base screws rather than risking stripping out in the lighter alloy receiver.

The only faults we can find are minor, but nonetheless to be considered.  First, the bolt throw seems excessively long for the rifle’s current short-action chamberings. In fact, several folks flinched or blinked when realizing just how close the levered bolt comes toward the face. Even with the scope mounted plenty rearward, the bolt’s full extension extends past the optic.   However, we wonder if that hints at soon-to-come long-action offerings. 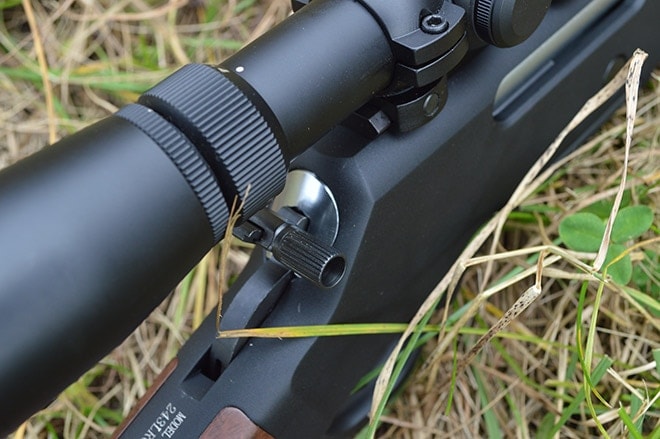 Secondly, we were sad to see there was no option to add or include iron sights.  And yes, we’re fully aware this is primarily a long range rifle, but many shooters still like the option.  Aside from those two gripes, the gun functioned 100% fine and dandy.  The magazine fits very snug and requires significant pressure on the release button to drop, but that eased with both time and familiarity.

Whereas the chamberings and capabilities of the majority of Henry’s other rifles drop off after 200 yards, this is where the Long Ranger is just getting warmed up.

This is not your daddy’s lever brush gun.  Rather, it’s a premium-grade, long range lever action rifle capable of doing everything a bolt gun can do at 300+ yards.  Time will tell whether we see more caliber offerings and styles, but one thing is certain: Henry builds all-American guns that get the job done, plain and simple.