Sure, we’re all familiar with the classy, flashy gold receiver of the Henry Golden Boy and Big Boys.  Beautiful they are; practical they are not.  Enter stage left the new-for-2015 Henry Big Boy Steel, with the same quality and features of the original polished brass version but made of steel for the practical use of modern hunters. 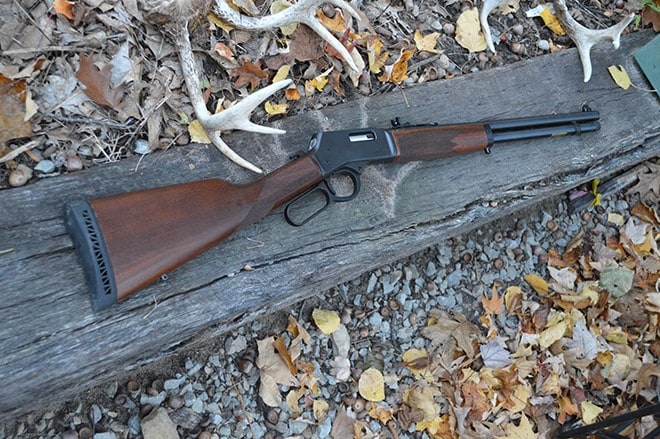 Henry Big Boy Steel, ready for the hunt. These guns are meant for heavy use. (Photo: Kristin Alberts)

There’s an adjustable Marbles semi-buckhorn rear sight with white diamond inserts and a brass bead front sight.  The Big Boy Steel comes drilled and tapped for simple scope mounting with bases available through Henry.  It’s important to note that scope mounting does not require removal of the rear sight.

The steel Big Boy’s straight-grip checkered stock is made of pure American walnut, adhering to Henry’s promise that their guns “will be made in the USA or won’t be made at all.” 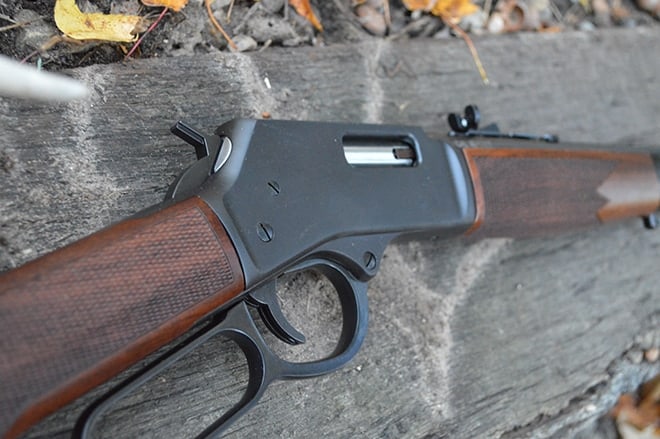 The major improvement towards practicality is obviously the steel receiver, stronger and more resilient than the original Big Boy’s brass alloy receiver.  The brass barrel band on the original Big Boy has been replaced here with a steel end cap.  Likewise, the buttstock is fitted with a recoil-reducing soft rubber pad instead of the polished brass buttplate.  In a further move to functionality, the Steel comes with sling swivels and checkering for improved grip in the field. 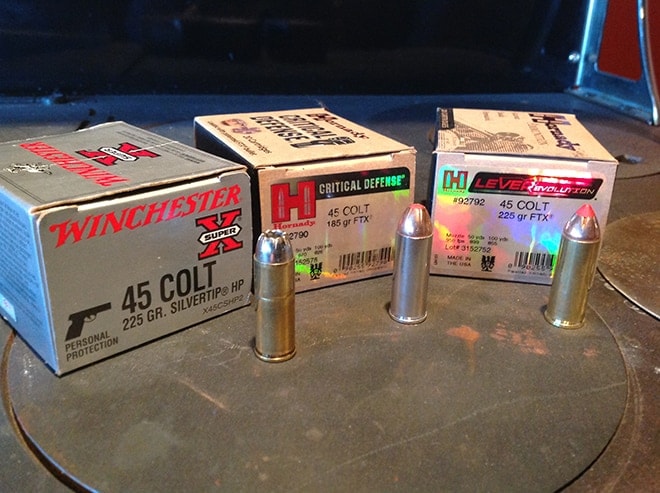 Regardless of location though, the Big Boy Steel is a utilitarian brush gun, truck gun, deer gun, cowboy target abuser.  By their lever-nature, all Big Boys are lefty-friendly.

MSRP, regardless of the caliber configuration, is $850, with real world prices under $700. A quick internet search turned up a steal on the Steel for $646.  These are guns that will hold their values, and should any problems arise, I know from experience that Henry’s customer service is second to none in pleasing the owner, no matter what it takes. 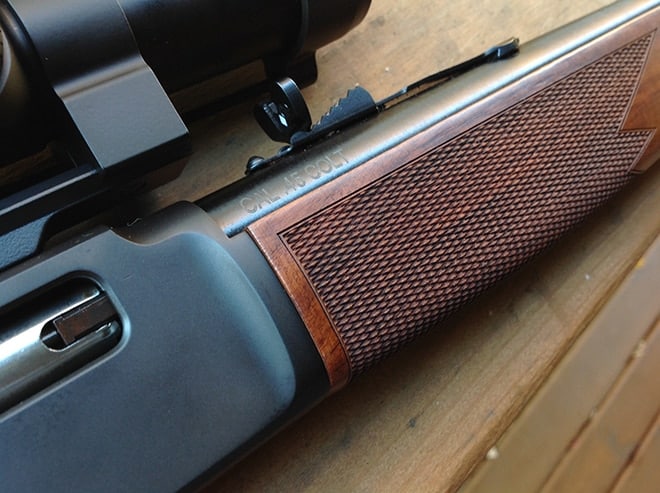 Our test gun came in the venerable .45 Long Colt, though each of the three straight wall chamberings is reminiscent of cowboy days.  The Big Boy calibers naturally appeal to hunters and shooters who already own sidearms in the aforementioned bores.

The Big Boy Steel is nothing special to look at with no bling, no fancy engraving, yet it’s a simple joy to behold.  It looks like what it is—a working man and woman’s rifle.  While the original brass Big Boy is beautiful in its flash and an exceptional occasional shooter and hunter, the Big Boy Steel is built for hard use. 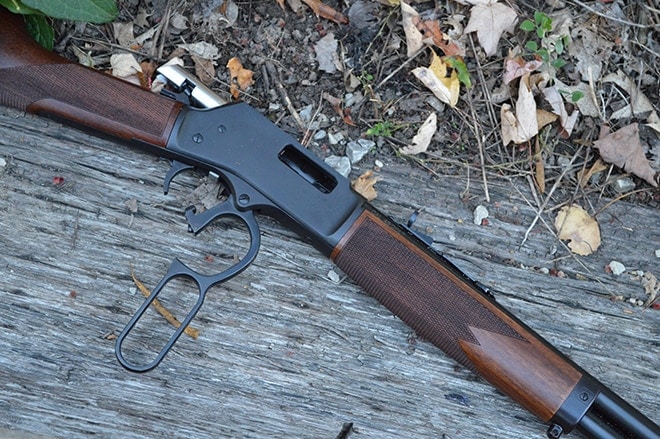 Out of the box, Henry lever guns have the smoothest action I have come across. (Photo: Kristin Alberts)

As with other Henry’s I’ve levered, the action is smooth right out of the box and hard to rival in any lever action of this generation.

Between the flat-matte metal finish and the satin finish stock, the Steel goes non-reflective incognito in the woods.  The fit and finish of metal to wood areas is superb.  With iron sights, the Steel is an ideal close-quarters hunting rifle, very capable and quick on target.  After some iron sight shooting, we mounted a 1.25-4×24 Bushnell Elite 4200 optic for more in-depth bench accuracy testing and real-world hunting practice offhand. 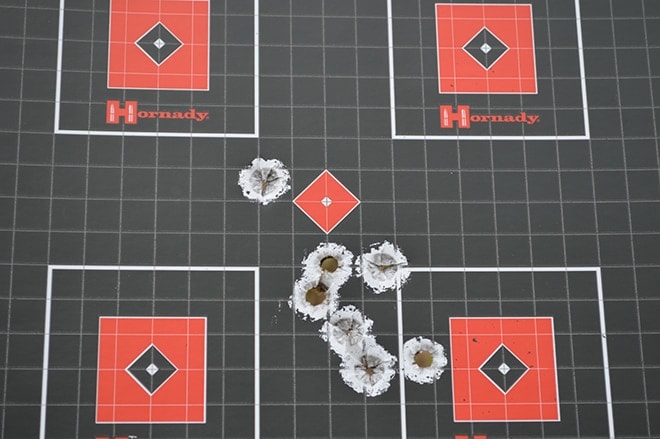 Though the Big Boy Steel is almost a pound-and-a-half lighter than it’s brass predecessor, recoil with the .45 Colt version was surprisingly negligible.  We shot handloads and el cheapo off-brand in weights from 185 to 250 in RN and JHP for sighting in and plinking.  We then moved on to serious shooting and  accuracy testing with Winchester Silvertip in 225 grain hollowpoints, Hornady Critical Defense with 185 grain FTX’s, and Hornady LEVERevolution with 225 grain FTX’s.  The Big Boy cycled them all without a hitch, as expected, and stabilized every weight of bullet to expected points of aim for bullet weight.  Our pet ammo turned out to be the LEVERevolution. Our best bench rest three-shot group at 100 yards came with LEVERevolution at 1.59.”  Average 3-shot groups with the premium ammo came in around 1.85″. 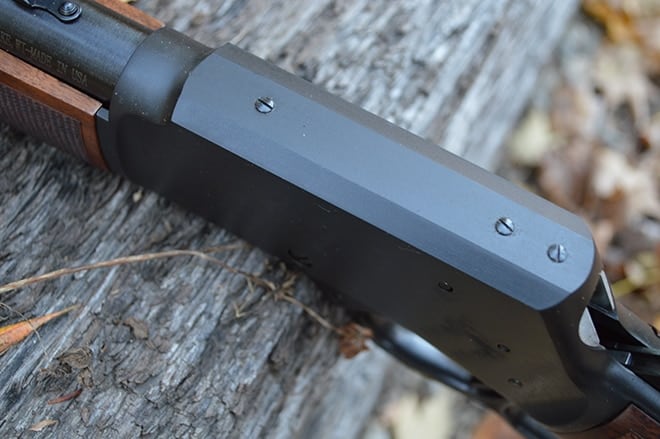 The rifle levers and cycles smooth and easy, feels good in the hand, and comes up naturally to the shoulder.  Though it would make a quick swinging brush gun, it is capable of much more than that and would make a solid hunting companion in the deer stand as well.   The Steel’s trigger has a relatively short travel and breaks crisp and clean at 3#-12oz on a Lyman digital pull gauge.  This is a gun that can truly be picked up out of the box and in short order the shooter can become comfortable and proficient.

The 10-round steel tube magazine with its cartridge-shaped loading port and brass spring-loaded rod are easy to use.  Whether you prefer tube loading Henrys or receiver gate loading Winchester-designs, one noticeable benefit here is that the Big Boy can be quickly unloaded by dumping the tube rather than cycling each live round through the action. 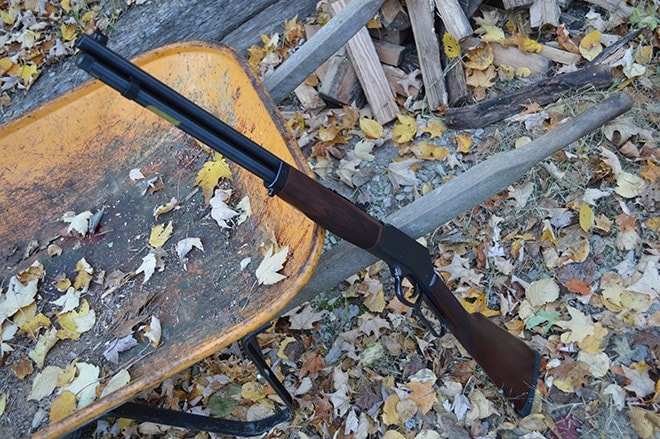 The Henry Big Boy steel is a utilitarian, American made workhorse of a rifle and a good investment for any hunter/shooter. (Photo: Kristin Alberts)

This is an all-American rifle built to last.  The Big Boy Steel is handsome in a beard-and-flannel kind of way.  The Steel is where traditional meets modern for today’s hunters who still revere days gone by but hunt hard and shoot plenty.  While the Big Boy Steel may sacrifice a little in looks sans the golden glow, it returns big dividends to hunters in the field. This is a rifle that can be used, abused, hunted, and passed from one generation to another.

For a gun with the quality of build at less than $700, it’s hard to beat.  All that’s left to the hunter are the notches you carve in the stock for each successful hunt.