John Browning would be proud if he could see how Kimber has improved his basic design since it first saw action in 1911. The Kimber Gold Combat RL II is still the Browning basic handgun that he designed and it is not only aesthetically pleasing but operates as a modern tactical 1911 should, smoothly with easy access to controls.

This 1911 is a utilitarian workhorse that would be comfortable in Law Enforcement, Military Special Ops, as well as in a personal defense environment. This full size, all steel, 1911 might be slightly large and heavy for most average size individuals to carry concealed, but if you are a Tom Selleck sized “Jesse Stone” you may be comfortable with this handgun for concealed carry. If General Patton had owned one of these handguns he would have insisted that it have pearl grips. In fact Kimber has smooth natural color bone replacement grips for the standard G-10 herringbone grips.

The Gold combat is in the moderate price range for custom, or semi-custom, handguns of this quality.

To get into the particulars of this full size 1911, the total weight is 40 ounces with an empty mag. Height is 5.50 inches and length is 8.7 inches, with a barrel length of 5.0 inches. Kimber has now has a replacement stainless steel threaded barrel, if a suppressor is needed. The grip is standard 110 degrees which for those not familiar with a 1911 can make proper target acquisition a fraction of a second slower than those used to, say, a Glock with a grip angle that is greater than the 1911 at approximately 120 degrees.

The Gold Combat comes with an ambidextrous thumb safety and an extended magazine well. Other custom enhancements are front strap checkering is 24 lines per inch, as well as 30 lines per inch checkering under the trigger guard. A tactical rail enables numerous options for lights and lasers. The slide boasts aggressive slide serrations and a flat top with serrations to aid in reducing sun reflection to enhance target acquisition. As mentioned, both the slide and frame are stainless steel with proprietary matte black KimPro II polished flats. 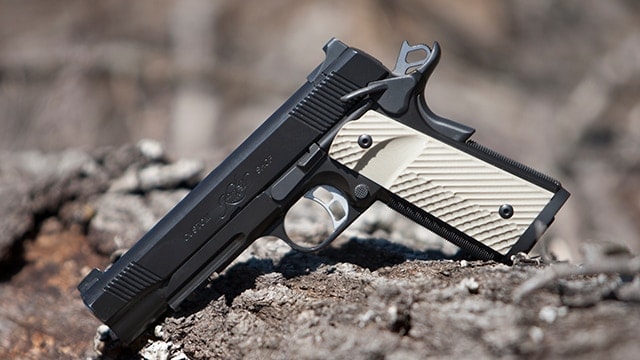 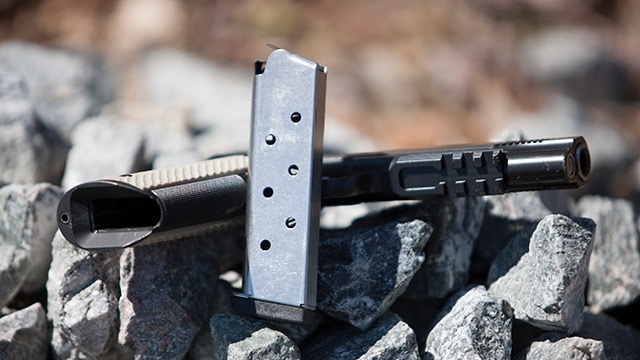 An advantage to the Gold Combat is the crowned bushingless bull barrel that eliminates one step in take down. The bull barrel aids in a secure lock between the barrel and the slide ensuring accurate shot placement.

The sights are fixed low profile tritium night sights with a rear sight cocking shoulder that assists in tactical reloads or malfunction clearing when one arm may be incapacitated. Also standard is the skeletonized premium aluminum trigger with a standard trigger pull of 4.0-5.0 pounds as well as a skeletonized hammer.

The MSRP on the Gold Combat RL II is $2,400.00. Usually somewhat less at your local gun store. 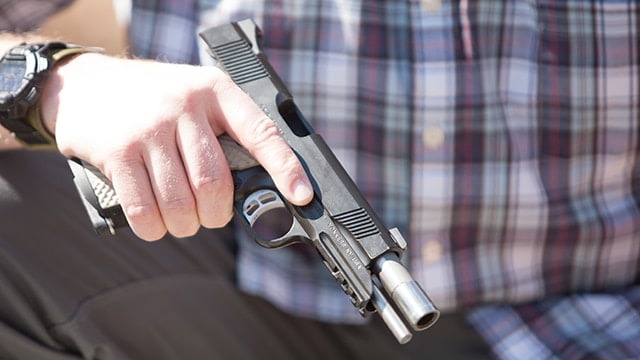 After many months of range testing we experienced only one failure to feed malfunction. This was due to our “failure to clean” procedure after approximately 500-700 rounds. The majority of rounds used were 230 grain FMJ ammunition by a majority of manufacturers including Federal Champion aluminum rounds, Blazer aluminum rounds, Blazer brass rounds, and some PMG rounds to name a few. All operated smoothly, providing the cleaning process was adhered to.

Since I have mentioned the cleaning process a few times it is best to note that the tight tolerances that make this pistol such an accurate out of the box pistol also make it somewhat susceptible to carbon fouling and it should be cleaned on a regular basis, which is something we all do without question.

Gun handling was a joy, especially to those who are familiar with the 1911 controls. The ambidextrous safety makes an audible click when engaging and there is a definite stop when engaging. There is a standard grip safety that can be further customized to a safety with a tactical bump. These are available from many manufacturers and Kimber as well. 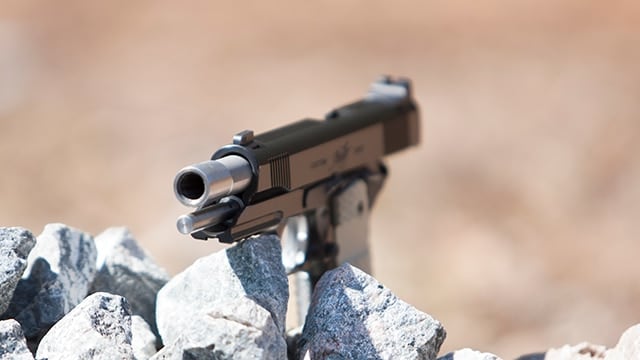 I have always found the slide release to be difficult to use if you do not perform the slide release after reload by manipulating the slide. This is easily dealt with by installing an extended slide release. This enables you to release the locked slide with the thumb. This is helpful in competitive shooting environments. I also prefer replacing the standard magazine release, which is ample on the Gold Combat, with an extended mag release. This combined with the VZ grips that have an exaggerated thumb cut speed up the mag change with a minimum of grip adjustment

The Gold Combat’s ramped barrel is nicely polished aiding in the reload sequence. The weight of the all steel frame and slide on this full size 1911 helps to mitigate the recoil even though the .45 is a fairly robust round. 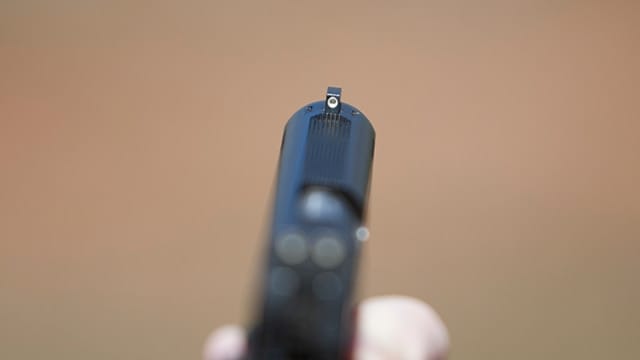 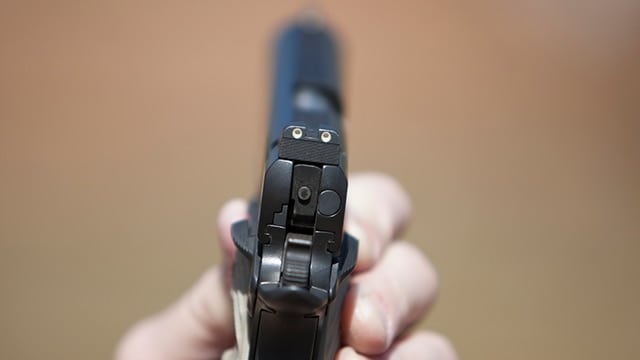 Accuracy out of the box was excellent. At average pistol engagement range of 7 – 25 yards, five round groups were consistently in the 1.25 to 1.50 inch groupings. The sights, as mentioned earlier, are dovetailed traditional three dot configuration with Tritium night sight inserts. The shouldered rear sight and the front post make sight alignment very quick and intuitive, especially for those experienced with the grip angle of the 1911.

As far as magazine release, the stainless steel magazines dropped cleanly and crisply making mag changes effortless. This is crucial in a tactical situation where eight rounds may not be sufficient. A quick mag change could be the difference between life and death. Of course there are other options such as a ten round mag which increases the capacity.

Of course you can lock it up and get dinner, or you can put it back in your holster and carry on. However, once you get home you should clean it. Being a 1911 it is at its best in a clean mode. Take down is fairly easy, not like a Glock, once you master the take down “tool”, I will call it. It is an “L” shaped piece of metal. I was in an Advanced Handgun certification class and the instructor says to the class, “field strip your handguns”. Of course I had not brought the take down tool so I had to ask for a “jumbo” paperclip. I mention this so you will know the approximate size of this tool. The tool is necessary to maintain tension on the recoil spring so you can remove the slide lock, slide release assembly. Once this is mastered the rest is fairly easy.

If I have been a little biased in this review it’s simply because I appreciate the perfection of a handgun the was manufactured today pretty much as it was intended in 1911. Many of us have seen an original 1911 and wanted to own an original. Most of them have seen a great deal of wear during the 107 years they have been in existence. This just goes to show you that the Kimber Gold Combat RL II is a handgun that your great, great grandchildren can leave to their children.

As much a joy to shoot as it is to simply look at!