The concealed carry debate is oddly contentious.  Some devoted readers will dismiss the Colt Mustang because it is a .380.  No other reason.  They won’t look at a pocket pistol chambered in anything other than 9mm, or .45 ACP.

I know where I stand. The .380 can be effective.  It is certainly effective enough for a back up gun.  I’m of the opinion that the .380 is ideal for a defensive weapon, especially when fired from the right gun.

Only it is not so new

This isn’t the first time the Mustang has been out of the stable.  The gun was originally introduced in 1986–though Colt has been playing with the .380 ACP round off and on since 1908, at least.  The Mustang enjoyed a long run, and developed some devoted fans, enough, it seems, for Colt to reissue the pocket pistol.  But why was it put out to pasture in the first place?

Opinions vary.  I think the original Mustang fell victim to the polymer fad.  Others didn’t like the single-action-only aspect.  There were some design issues, including complaints about the guns not standing up to high round counts and hard use.  Maybe demand just dwindled.

But it is back.  And it is really exquisite.  It should be for $615, which seems to be the asking price (when you can find one).

The frame is made of an aluminum alloy that has been blasted to have a nice rough texture.  While the frame isn’t as textured as many checkered ones, it is more than sufficient for the Mustang.  The recoil is manageable.  The slide is milled from stainless bar stock.  The slab sides are polished, but the top has the same rough texture of the frame.  When the two are paired together, they look like they are made form the same material.    Hopefully they will age together gracefully.

The gun’s grips are black, and cut from a rubbery plastic.  They’re fine, too.  I’ll admit, I’d like to have the whole thing nickel plated.  And I’d like some nice mother-of-pearl grips.  But that’s just vanity. 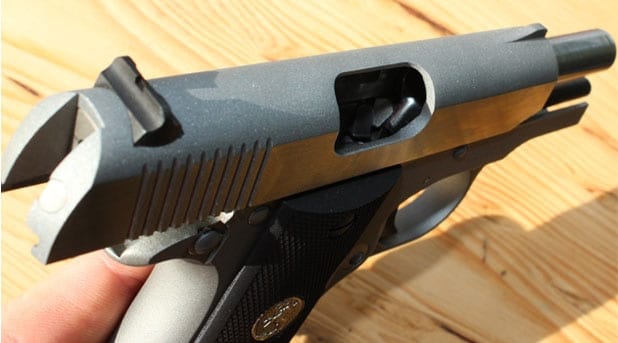 Or maybe it’s not just vanity.  This gun looks too humble.  But pull the trigger, and you’ll see its ego shine.  The Mustang should strut a bit.  Brag.  It shoots like a much larger weapon.

I set up a silhouette at 21 feet.  Seven yards is a respectable distance for a weapon with just over two inches of working barrel.  From that range, the mustang shoots nice tight groups.  I’d placed some clays on the target–no challenge.  Shooting from a standard isosceles stance, I could shoot five-round groups that came in at two inches, easily.  I shot with Hornady Critical Defense, American Eagle FMJ, and Georgia Arms FMJ.  There seemed to be little difference in the accuracy.

Part of this comes from the excellent sights on the Mustang.  The front sight is milled from the bar stock of the slide and isn’t adjustable.  The rear sight is rounded over slightly, but adjustable and flat black.  The combination makes for a very accurate pistol.

There is a down side to the good sights.  It is harder to carry the Mustang in your pocket.  The size of the rear sight makes it drag a bit. And once you draw, you have to know how to make the gun go.  The double action only pistols, especially those without external safeties, have spoiled a lot of shooters.  But single action is more complicated.  There must be a round in the chamber (seems obvious enough), the hammer has to be cocked (manually the first time), and the safety has to be off (if you actually want the gun to shoot).  If you carry a 1911, this is a no-brainer.  In fact, it will be second nature, as all of the controls are the same.  But if you carry anything else, you’ll have to work with the Mustang.  Practice.

That said, the single action trigger pull on the Mustang is so much easier than that of most DAO pocket pistols. This one breaks just over five pounds.  So aiming is much easier.  With the benefit of the clear sight picture, the Mustang rises above the crowd of plastic.  And it is neither heavy nor light, exactly.  At 12.5 ounces, the Mustang has enough heft to manage the .380’s modest recoil, but not enough weight to make it cumbersome to carry.

If you won’t consider anything below the 9mm for concealed carry, or if you are one of those who prefer DAO pocket guns, than you’re missing out.  I ran this gun side by side with two other .380s (a Ruger LCP and a Kel-Tec P3AT).  All will get the job done.

But the Mustang makes it easy.  The size makes it easily manageable yet completely concealable.  The weight and balance are perfect for the .380 ACP.  The sights allow for both rapid target acquisition and confident shot placement, which greatly increases the .380 ACP’s lethality.

Clearly I’m enamored with the Mustang.  I knew I was going to like it.  But I have to add this one detail.  When the Mustang actually arrived, I was dubious.  This gun isn’t cheap–and most .380s are quite inexpensive.  There is something about them that feels almost disposable.  So I was really disappointed to feel how stiff the Mustang was.  The slide felt a bit gritty.  The safety was hard to engage.  The trigger, even, didn’t feel as smooth as I had expected from a Colt.  In short, I felt really let down.

But then I shot it.

I was at the range with Jacob, a good friend and expert gun guru.  He looked the Mustang over and he wasn’t impressed, either.  After a box of .380s, though, the Mustang loosened up.  We changed brands.  We ran the cheap stuff through and the expensive carry ammo, too.  The gun hit a stride after about 100 rounds.  Everything smoothed out. 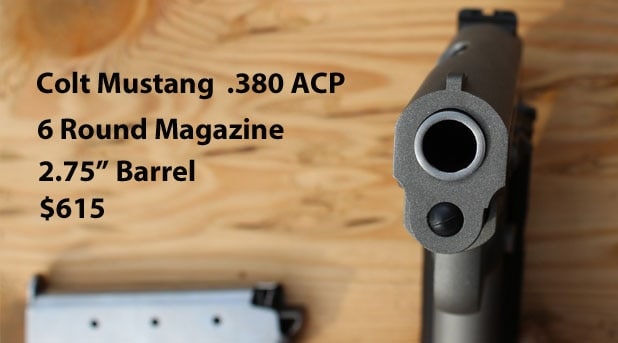 And Jacob’s opinion of the Mustang changed.  I could see it on the target.  Tight groups from 21 feet.  He staged shots.  He emptied the gun as fast as he could.  He practiced shooting from a draw with rounds in the chamber and with the chamber empty.  And he hit again and again.

After shooting for more than half an hour, Jacob went back to the bench and stripped the Mustang.  I’ve never seen him do this before (right in the middle of a shoot, I mean).  He cleaned everything, he checked all of the contact points.  There was no excessive wear.  He oiled it up and put it back together and went right back to the range.

You have to understand–Jacob is a tactual-black kind of guy.  He has no love for traditional lines, or nostalgic period pieces.  If he were going to carry a single action .380, it would be the Sig Sauer P238 (a kickass gun that is so ugly it should be kept in its holster until needed).  But he would rather carry a Kel-Tec P3AT.  He didn’t want to like the Mustang, but then he shot it.  And I know, because I shoot with Jacob a lot, that he shoots better with the Mustang than he does with any other .380 he’s shot.

There was nothing wrong with the Mustang during this break in period.  It never jammed or failed to feed.  It was as accurate on the first round as it is now.  But now the gun has that paradoxical taught/slick feel that makes 1911 fans smile.