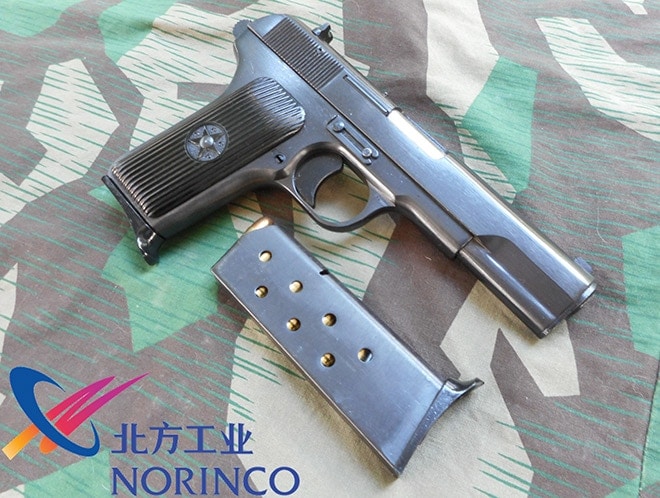 Believe it or not, the TT-33 Tokarev and its descendants are actually some of the most prolific handguns in the world. These often inexpensive old handguns have a bit of a following in the USA due to their robust construction, reliability, and low price. True there are examples out there that can be quite expensive, usually because they are war trophies or early Soviet made handguns. However for many novice shooters, the Tokarev’s low price appeals to them.

What doesn’t appeal to many of them is the 7.62x25mm ammo it shoots, a bit of an uncommon sight in American gun stores. So what is one to do when they want a Tokarev as well as common ammo? The answer comes from the China North Industries Corporation or Norinco.

At one time Chinese-made firearms were a common sight in gun stores across the nation. Firearms produced by Norinco and Polytech flooded gun stores, were soaked in grease, and looked down upon as cheap, commie junk. The Norinco SKS became such an ubiquitous sight that it was dubbed the “poor man’s deer rifle.” Despite the success of the SKS, other rifles such as the Type 56 were seen as “extreme militia” arms to be used only by anti-government extremists and cultists. 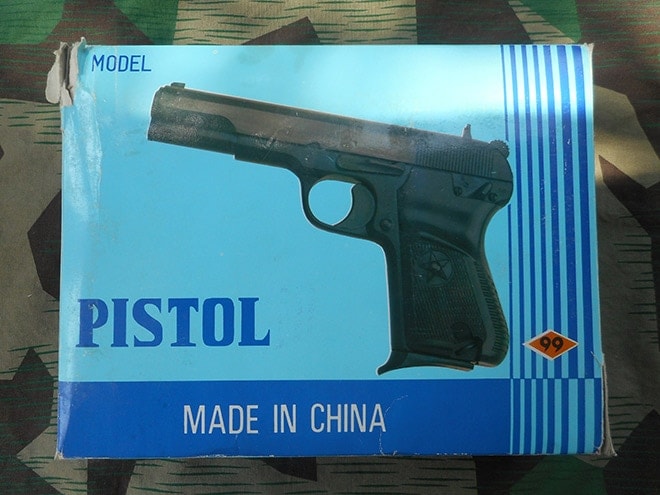 The cheap box for the Norinco Model 213 pistol.(Photo: Francis Borek)

In 1989, imports were hampered with restrictions on imported firearms which is known by many as 922(r). Though the Mak-90 rifles sold well enough, often purchased to spite the government which passed 922(r) and the 1994 Violent Crime Reduction Act, Norinco imports were halted for good in the mid-90s. Around this time, a Norinco importer was caught in a US Customs sting operation when he offered an undercover agent machine guns, rocket launchers, and full-auto Type-56s.

Development and design of the Norinco Model 213

With the end of Norinco imports came a steady rise in prices — prices that would tend to spike during any sort of buying panic. The “cheap commie junk” is now advertised as “unfired, collector’s grade” on auction sites and gun stores. One gun whose value has managed to keep steady is the old Norinco Model 213.

The Model 213 is a copy of the Soviet TT-33 Tokarev pistol. The Soviet government brutally vanquished it’s enemies in the Russian Civil War and by 1929 the military was ready to reorganize and modernize their forces. This meant modernizing their small arms as well. 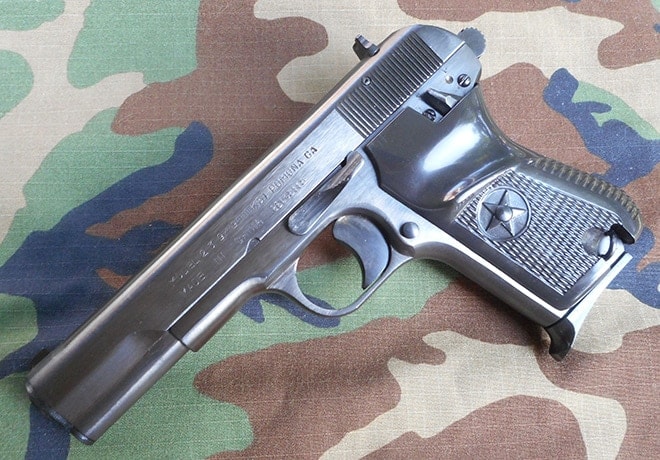 The wrap around grips and the safety. Some like the grips, but the safety is universally disliked. (Photo: Francis Borek)

The large 1891 Mosin-Nagant rifles was shortened and simplified into the 91/30 Mosin Nagant. They also replaced the decidedly mediocre M1895 Nagant revolver with something more up to date. The M1895 was rugged, and easy enough to manufacture. It was also obsolescent the day it was introduced: the trigger pull is horrendous and the caliber was anemic. The TT-33 is a far more modern handgun than the old M1895.

Handling a Norinco 213 is essentially the same as a normal Tokarev, with a few key differences. First off it is chambered in 9x19mm. Yes, we’ve heard how the 7.62x25mm cartridge can rip through armor, but 9x19mm is far more common.

The Norinco 213 has an awkward safety, though this was copied from the earlier Tokagypt, which was a Hungarian export model made for Egypt. This safety is placed at the rear of the frame just like a 1911. Unlike the up or down of the 1911’s safety, the Norinco 213’s safety is pushed forwards for safe or to the rear for fire. Though it can be swept with the thumb, it is still a little awkward. 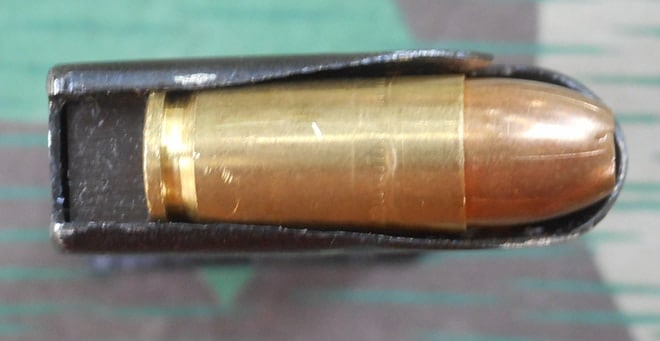 Norinco added a spacer in the magazine for the shorter 9x19mm cartridge. (Photo: Francis Borek)

Another problem is the massive wrap around grips that Norinco thought would comfortably fit American hands. I found these to be quite uncomfortable to hold, and swapped them out with surplus Soviet Tokarev grips.

One of the reason I like the Tokarev family of handguns is the feel of the gun. Borrowing from the 1911 and Browning 1903, Tokarev really managed to copy the feel of the 1903. This was an excellent decision choice, as the Browning 1903 is a very comfortable handgun, though some with larger hands might think it is too small.

In the field this translates to an easy to handle and easy shooting handgun. The sights are basic in the extreme. The rear sight is a tall piece of blued steel with a U-notch, the front blade is thick enough to easily see. The rear sight is also tall enough to use it against the side of a table or flat surface to work the slide. The handgun itself is finished in all blued steel, which is rather attractive until you get close and notice it isn’t fully polished. The internals also still have plenty of tool marks and the slide serrations are quite even. The box the gun came in looks like it was meant for a cheap air gun. It is both equal parts cheap and hilarious. 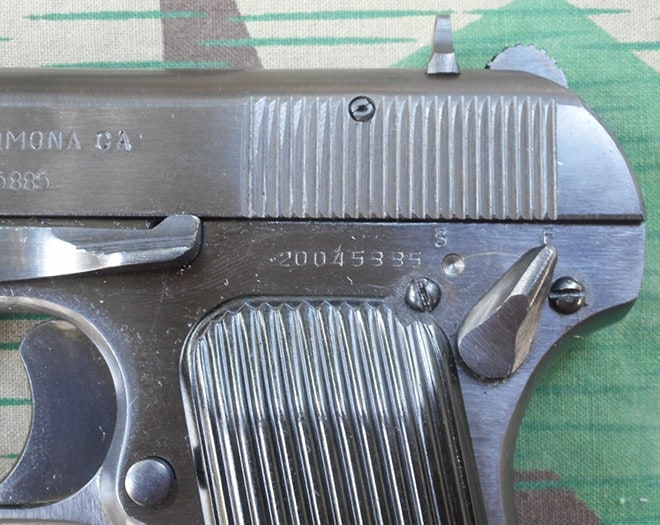 Disassembly is simple, and should be familiar to those who are 1911 aficionados. There is a clip on the right side of the frame. Push it to the rear with the base of the magazine or a non-marring hammer or punch. Push out the slide release and pull the slide forward and off of the frame. Be careful to ensure that the guide rod and spring don’t fly out. Remove the guide rod and spring, rotate the barrel bushing 180 degrees and remove. Pull the barrel out. Without the slide, the hammer assembly comes out as one unit. 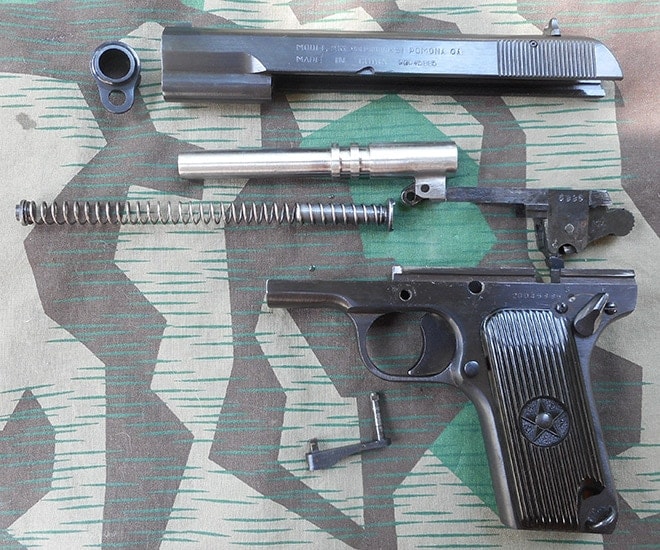 Field stripping should feel familiar to anyone who owns a 1911. (Photo: Francis Borek)

On the range I noticed something a bit odd. The slide is very difficult to pull when the hammer is all the way down or at half-cock. Not having this issue with a Polish Tokarev, I did a little research and it turns out that Norinco’s quality control would sometimes forget about the tiny little area at the rear of the slide where it first contacts the hammer. On the Polish (and I’m assuming every other nation’s) Tokarev, the area is nicely rounded off. On the Norinco 213, it is squared off; obviously someone forgot, didn’t care, or were never instructed to do so in the first place. Accuracy is acceptable for a combat pistol, around 2.5 inches at 10 yards with cheap Blazer Brass FMJs. 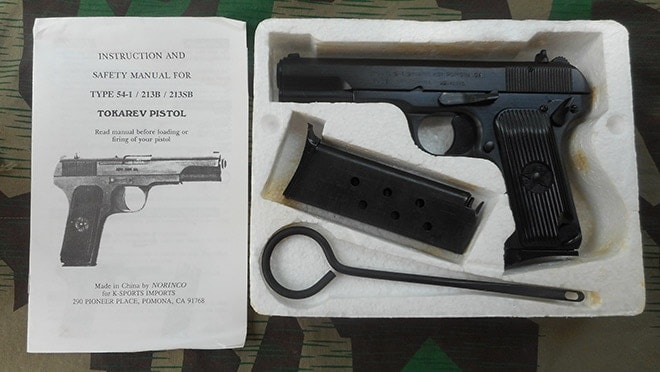 What is inside the cheap looking box. (Photo: Francis Borek)

While Norinco firearms are no longer imported into the US, it’s still fairly easy to get your hands on a Norinco 213. Chambered in 9x19mm, they were an inexpensive handgun when they were first imported and they still are. This Norinco 213 was purchased for $225 before tax and fees. I wouldn’t take this pistol into combat due to the issues with the slide, and the poor safety. But as a range toy, it can’t be beat. These days, commercially made Tokarevs are made by Zastava of Serbia. But I still prefer the Norinco due to better workmanship. For those on a budget, and who can find an example without slide issues, then the Norinco 213 could serve as a reliable home defense handgun. She’s not the most refined handgun, but she certainly can’t be beat for $225.