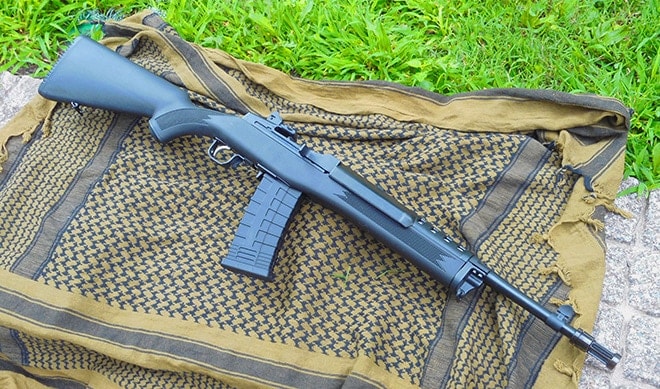 I have owned a multitude of rifles that I place in a sport/utility role: they are primarily for fun or to “defend the homestead.” ARs, AKs, SKSs, M1 Garands and Carbines, M1As — even a few lever actions and a M1905 Ross have filled this niche for me. But like some weird romantic relationship, I always end up going back to the Ruger Mini-14 despite all my other, maybe even more attractive options. Why? Let me explain…

The Ruger Mini-14 is an old rifle based on even older rifles. It is not exactly a scaled down clone of the M14. Rather it’s a melding of three famous rifles. The bolt is from the M1 Garand, the trigger group and magazine are taken from the M14 and the gas system is from the M1 Carbine. 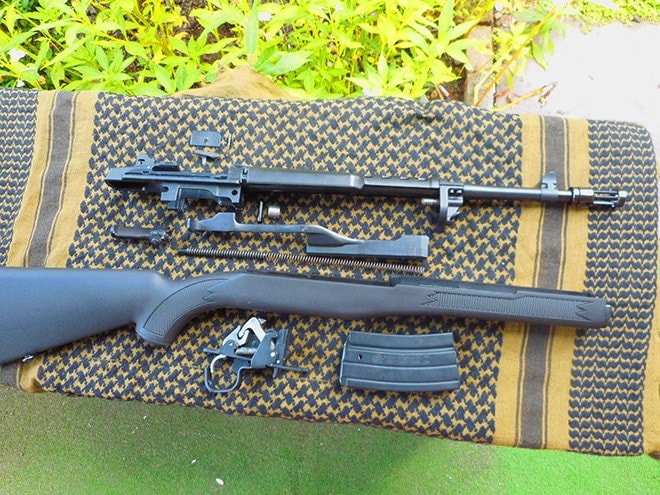 Since its introduction in 1973, the Mini-14 has become a staple of both law-enforcement and civilian shooters, favored for it’s light weight, good looks and handling characteristics. Many shooters and LEOs at the time were also veterans who had used M1 Garands, Carbines and M14s during their service and held these weapons in high esteem. Even if they hadn’t used them before, they remembered the M16’s disastrous introduction to service. Many shooters also just wanted a rifle similar to what their fathers and grandfathers used.

All that has changed. With the AR-15 having dethroned the Mini-14 as the most popular self-loading rifle in the country, many consider the Mini-14’s days to be numbered. The AR-15 has excellent ergonomics, parts are sold everywhere, and rifles can be had at a bargain for around $450. Reliability of high-end ARs often goes unquestioned. While the number of those who were issued the old M1s and M14s is sadly decreasing, more and more shooters want to use rifles like those used in today’s military, not yesterday’s. To that end, a traditional appearance is becoming less and less important. To some a traditional appearance is even downright offensive as it somehow implies selling out to those who want to ban scary looking “black” rifles. 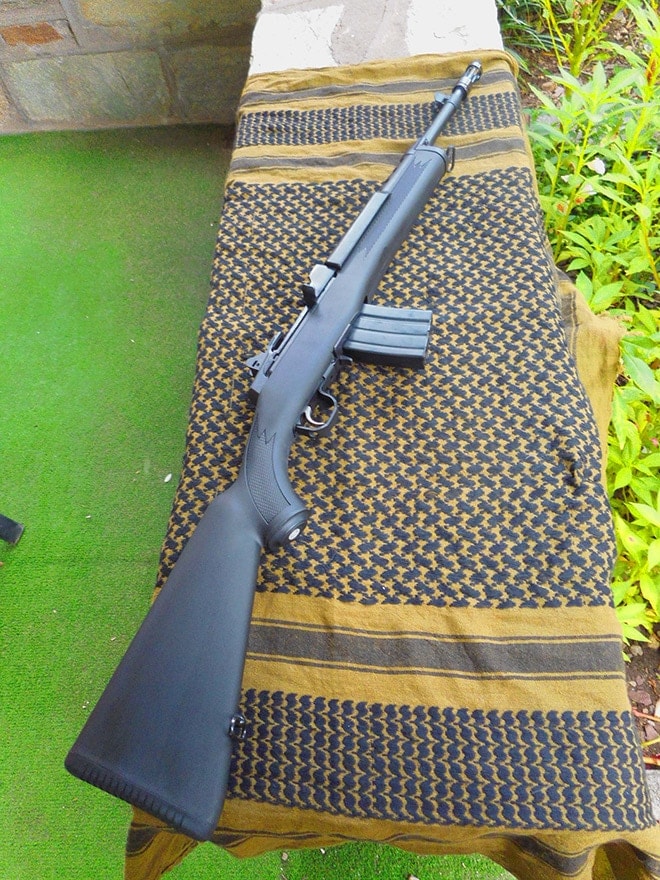 Yet when I ask my local gun stores about Mini-14s, the response is surprising: there is still a demand for these old rifles. Used models rarely stay on store shelves for long. New models are hard to come by from distributors. The old factory folding stock rifles are certified collector’s items. Police trade-in rifles are often snatched up the day they’re put on the shelf. My rifle was purchased on a whim for $550.

The variant shown here is listed the Mini-14 Tactical in Ruger’s catalog.(which also comes in .300 BLK). It features a blued finish, 16.12 inch cold hammer forged barrel, and a black synthetic stock. The barrel is threaded and has a AC-556 flash hider installed. The rear sight is an adjustable aperture and the front sight is a thick blade protected by two ears like an M1 Garand. The rifle weighs in at a trim 6.7 lbs. Included with the rifle are two 20-round magazines, Picatinny rail, and Ruger scope rings for the integral scope mounts.

Handling wise, the rifle retains the positive characteristics of it’s predecessors and those who are familiar with the AK or SKS platforms should feel at home. The rifle has a reciprocating charging handle attached to the operating rod. Though this means additional mass moving back and forth unlike an AR, the charging handle is also in a much more natural position for many people. Also with a reciprocating charging handle, it is much easier to extract a stuck case. The bolt hold-open is a small button reminiscent of the M1 Carbine, except on the Mini-14 it is placed on the receiver instead of the charging handle. 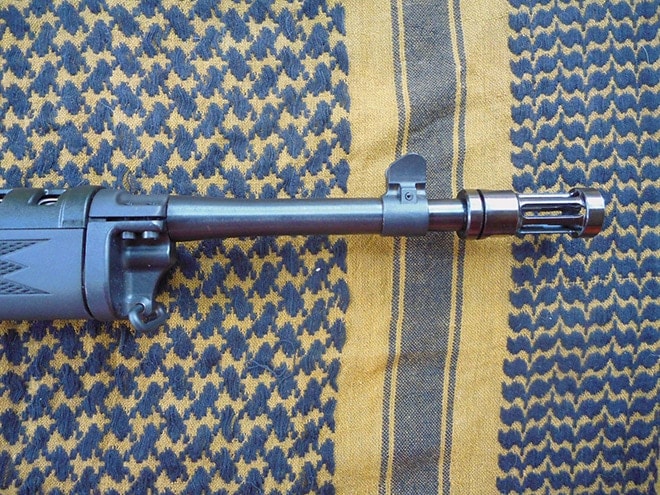 Also like the AK and many other rifles is the “rock-and-lock” insertion of magazines. Slightly awkward to new shooters, it will never be as fast an AR mag change. However with plenty of practice, the user can manage a quick reload.

One notable holdover from the older rifles is the trigger guard safety. Contrary to what many believe, it is indeed possible to safely use this safety. If you follow the rules of gun safety, then it is perfectly fine for the job. It is a very positive safety that requires a bit of pressure to push it off of safe. I tend to bring the rifle up to my shoulder and have the rifle already pointing down range when I push the safety off. Yes it’s antiquated, but it’s quick, worked through three major wars and continues to work to this day.

Field stripping the rifle should be familiar to those who are experienced with the M1 Garand/Carbine, and the M14 family of rifles. Pop open the trigger guard and pull the action out of the stock. Easy day. 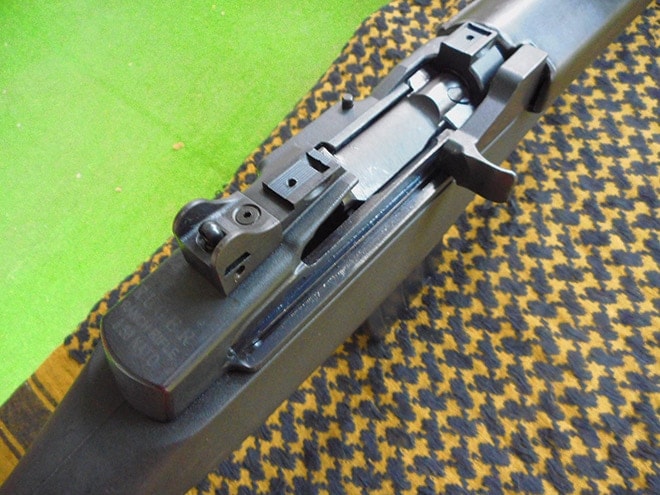 At the shooting range you’ll quickly realize the Mini-14 is not a precision rifle. For one thing there is too much mass moving around whenever the rifle fires, a fault that also lays with it’s parent rifles. The rear sight is also only adjustable with a hex key. It is adjustable for both windage and elevation, but it does feel cheap. Investing in optics or a replacement for the Tech-Sights would be something to consider. The aperture however is placed close to the shooter’s eye and is well sized — not too small or too large like the aperture on standard AR-15 sights. The trigger is a mixed bag. The travel is short and the break is not too heavy or light, just right at around five pounds. It is however quite mushy, though not the gritty, heavy mess that is often found in mil-spec AR triggers.

With iron sights I managed to pull in a two inch group at fifty yards with Federal XM-193 ammunition. With Wolf WPA steel cased, I was able to shoot a three inch group. Not stellar, but I find it to be perfectly acceptable as a sport/utility rifle. Reliability was good using either the factory magazines or 30-round Tapco magazines. No failures to feed (FTF) or failures to eject (FTE) and the bolt locked open when the magazine ran empty. 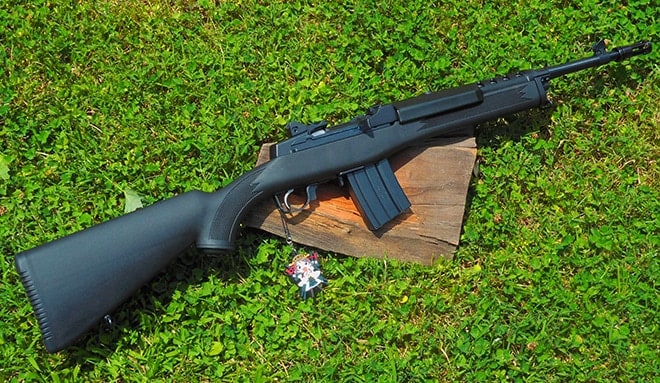 As hard as it may seem to some, there are shooters out there who don’t want an AR-15. There are those who in one way or another were snakebitten by the AR and others who simply prefer the looks and ergonomics of the Mini-14 when it comes to owning a centerfire semi-auto rifle. These people may be “traditionalists” who prefer a sporter-style stock, yet they also realise they’re not really giving up anything in terms of firepower. The Mini-14 is not an AR, but it doesn’t have to be: it has already proven itself, carved out a niche and it doesn’t care what others think. Not as popular as it used to be, the Mini-14 is still here and will be sticking around for years to come if shooters like me continue to have our say.