Rimfire-shotgun combos have been in-and-out of vogue for many decades, and while the “old” guns from Savage, Springfield, and Stevens have become more collectors than everyday shooters, companies like Chiappa, EAA, and Baikal have attempted to fill the void.  None is better known, however, than the remake of Savage’s beloved 24, now renamed the Model 42 and available in both standard and takedown versions. 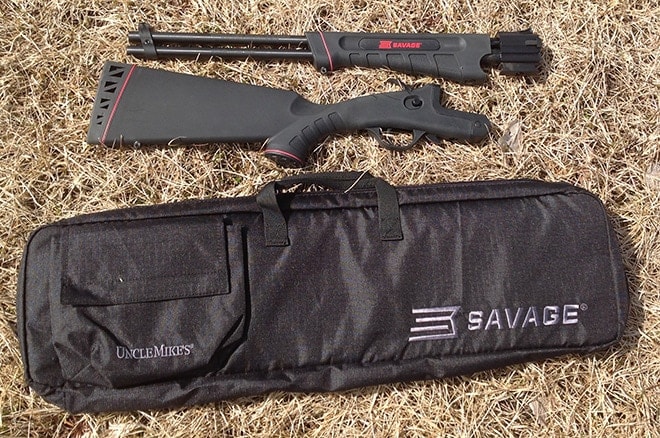 The Takedown and its Uncle Mikes pack, with neatly embroidered Savage logo and a pocket for extra gear. (Photo: Kristin Alberts)

After going years without producing a popular combo gun since the popular 24, Savage first came back with the new 42, and now for 2016-17, the 42 Takedown.  The break-open combination guns are available with either a .22LR or .22 WMR barrel over a .410 bore shotgun.  The guns wear a black synthetic stock with red line and letter trim and blued metal work with 20-inch carbon steel barrels.  The 42 Takedowns weigh in at a feathery six pounds even, and measure only 35.75 inches overall length. There’s even a takedown-youth model that measures a full inch shorter and a pound and a half lighter, though most youth shooters would do just fine with the standard model.

When broken down, the combo fits nicely into its included Uncle Mike’s 8×24 inch soft black carrying bag with MOLLE webbing and a pocket for additional gear.  There are two sling studs, as well as a soft rubber butt pad (not that there’s any recoil to begin with).  Squeezing the lever ahead of the trigger guard breaks the action, and either one or both barrels can be loaded. Once the action is closed, the shooter can then actuate the hammer switch which manually selects which firing pin will be struck.  The cycle proceeds: cock the hammer, pull the trigger, and if you’ve loaded two rounds, switch the hammer-mounted selector, and repeat. 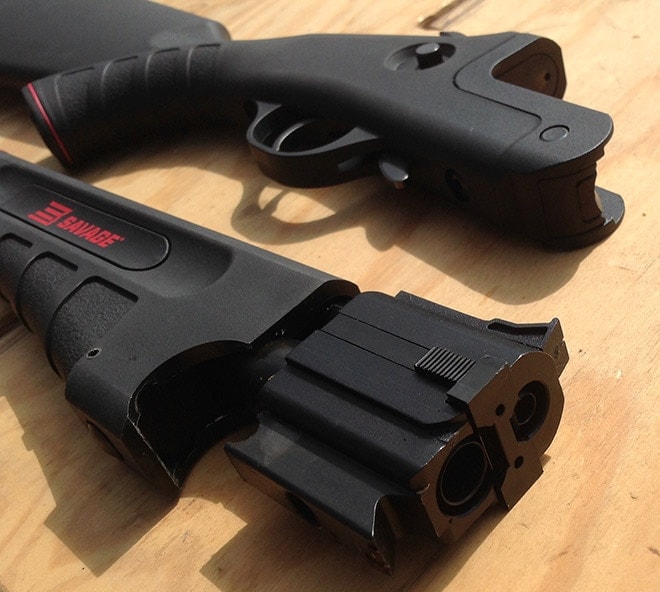 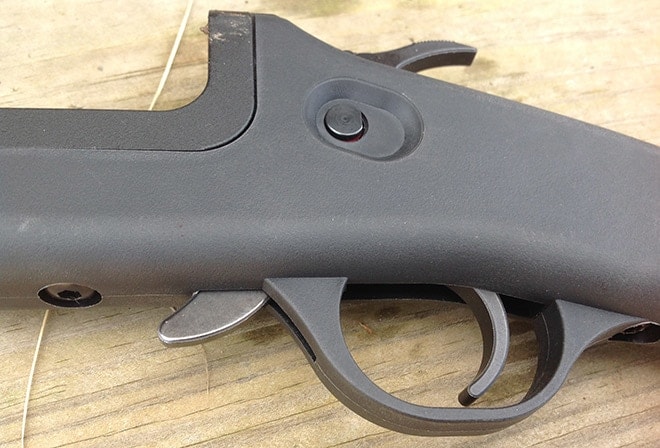 The lever at the front of the trigger guard breaks the action open, while the safety is easy to access at the rear of the action. (Photo: Kristin Alberts) 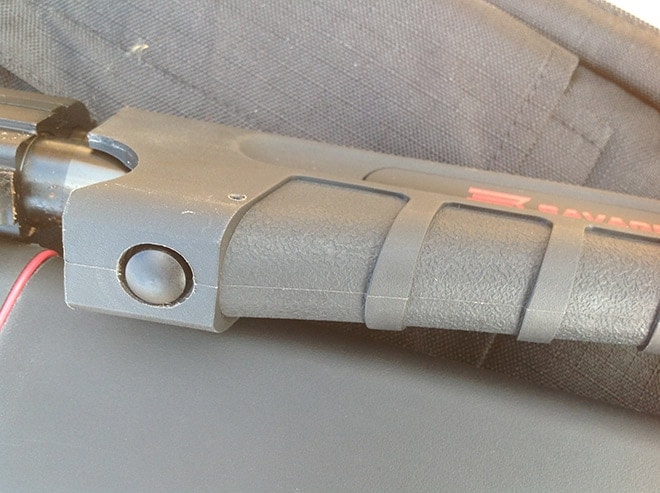 Push button takedown located on the lower forend. Not the rough finish on the plastic of the stocks. (Photo: Kristin Alberts) 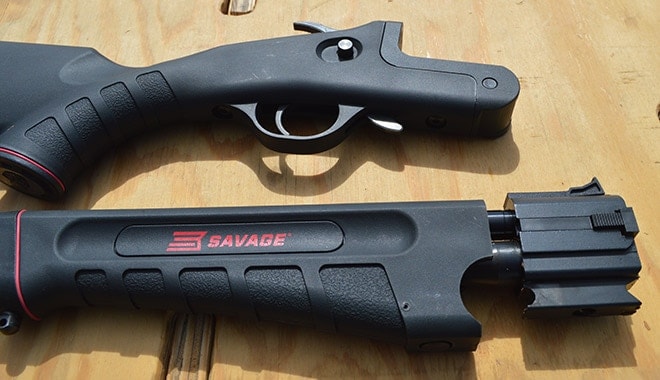 As the forend slides forward from its locked position, the gun can be taken down with the lever at the front of the trigger guard. (Photo: Kristin Alberts)

The 42 takes down easily with one button allowing the forend to move forward, yet remain attached to the barrels; the entire front section is then simply tipped off the frame by breaking open the action. MSRP of the Model 42 is $500, with real-world prices closer to $375. 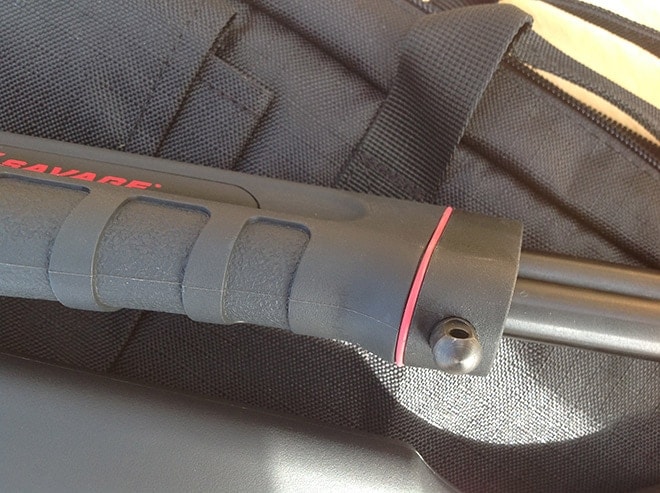 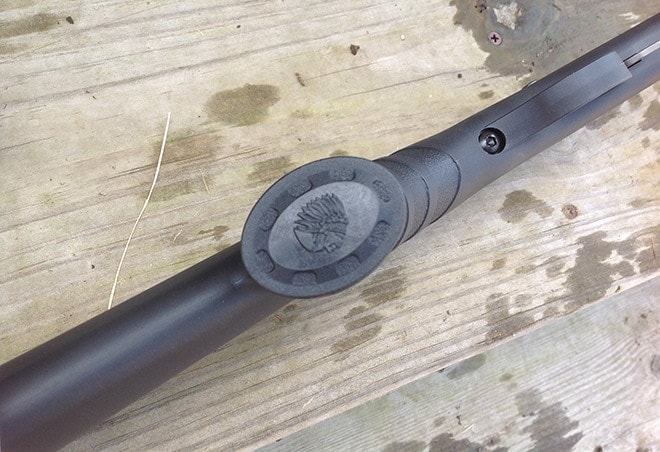 The molded Savage grip cap. Stocks are plain and fairly roughly finished but get the job done. (Photo: Kristin Alberts) 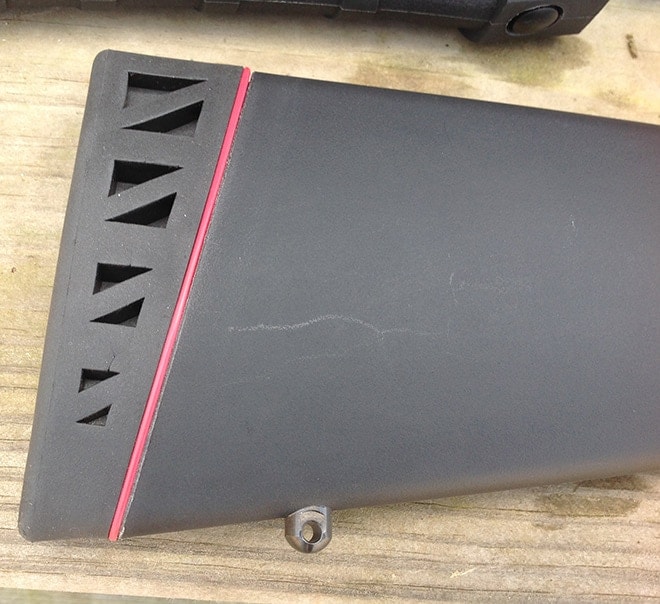 While its synthetic stock is weather and heat resistant, its slimline build and light weight lends it a flimsier feel than shooters of the original Model 24.  That’s a double-edged sword, however, as the narrow, light stock and overall build ties the gun naturally to a break-down, stow-away combo that would be easily bagged, buried, or carried. 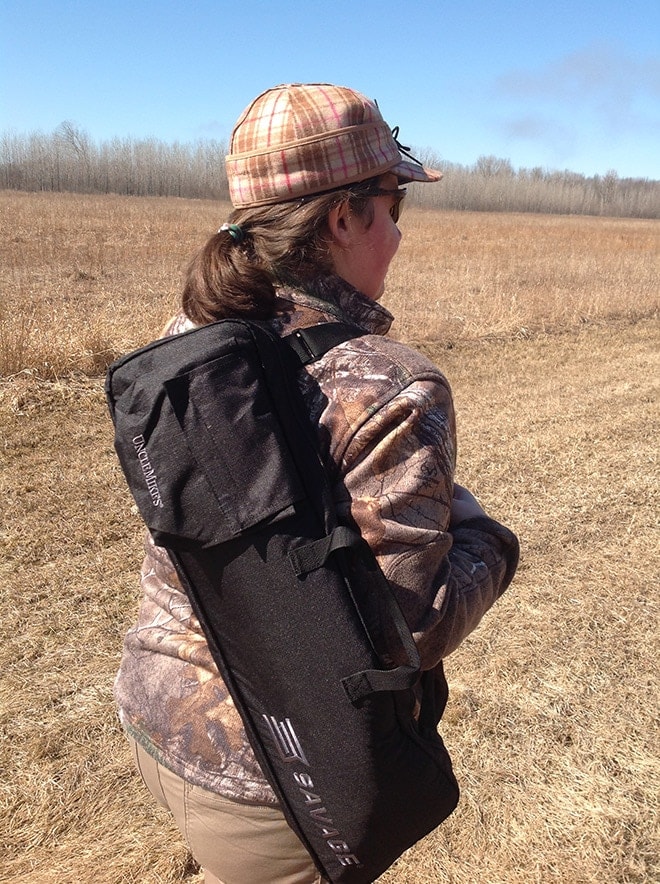 The Model 42 packs easily into its included Uncle Mikes carrying bag with room for additional ammo and gear as well. (Photo: Kristin Alberts)

Our only other qualms are the plastic, non-adjustable sights and lack of mounting options for optics. The sights are not the easiest to acquire and take some practice to shoot with proficiency, but it can be mastered with practice.   There’s also the fact that the .410 is currently the only shotgun offering.  There’s no telling what Savage has in the works, but the old .223/20 gauge combo guns were sweet for longer range, heavier duty work.  The benefit with the current models, however, is that both .22LR or 22 Magnum and .410 shotgun ammo is light enough to carry in bulk if needed. 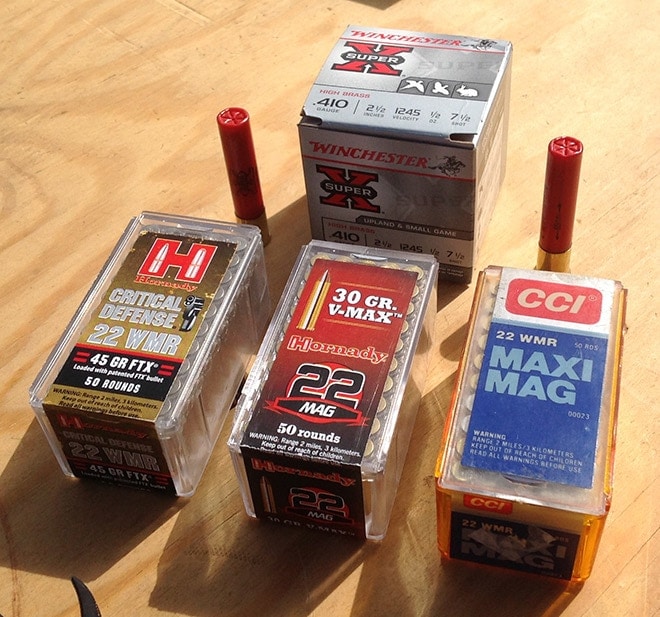 While the stature and price of the Savage 42 make the gun instantly appealing to young and novice shooters, the platform takes some practice for both safety and proficiency.  With some range time, shooters can pretty easily get accustomed to the process of setting the hammer selector, cocking, firing, barrel selecting, cocking, firing, and extracting with a degree of safety and speed.  The 42 does, however, fit well and lend confidence to young shooters based on size, weight, and lack of recoil. 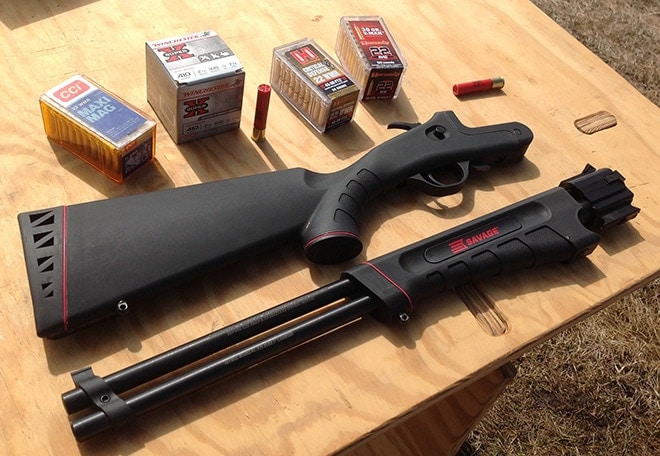 When the Takedown Model 42 is broken down, it doesn’t take much more room in the pack than a bunch of ammo. (Photo: Kristin Alberts)

Though aesthetics may not be for everybody with the slim black synthetic and vibrant red trim, the littler banger serves its intended purpose.  The 42 Takedown cycled all the ammo we provided with perfect reliability and we experienced the adequate accuracy you’d expect from such a gun.  Given the limitations of the factory “iron” sights, we felt most comfortable staying inside a 50 yard hunting range. We enjoyed hunting small game with the 42, as it’s light, wieldy, and covers the gamut of longer range shots on distancing squirrels with the .22 WMR barrel and sneaky nearby bunnies with the .410.

The gun comes up to the shoulder well, and is quick to acquire targets in the field.  The safety is easily actuated, though in hunting situations, it is quite noisy if your quarry is sound-wary.  With the nicely embroidered, padded soft case and simple, one button takedown, the Model 42 is an ideal gun to keep in the backseat of the truck, tuck away at the cabin, or even slide into a survival pack.

The somewhat crude and nonadjustable iron sights, combined with the lack of provisions for an optic, were our biggest criticism of the Model 42. (Photo: Kristin Alberts) 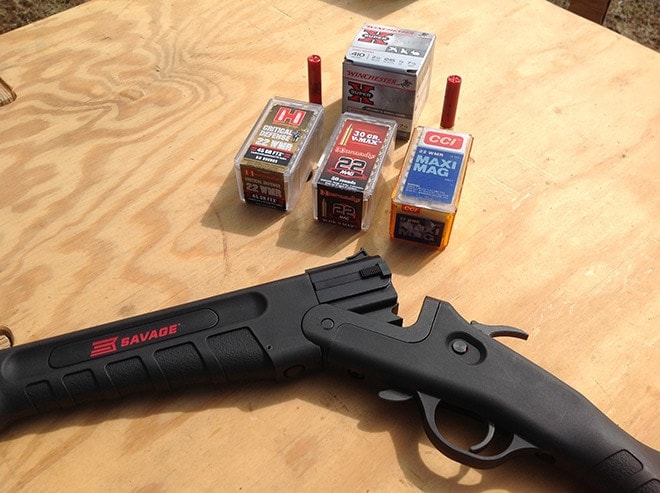 In short, the new Model 42 is not quite reminiscent of either the options or build quality of the beloved original 24s.  The guns limitations, however, are also its strengths in terms of size, weight, and versatility.  The 42 is really its own animal, and while not the same as its predecessor, is nonetheless a solid option for backpacking, bug-outs, small-game hunting, and young shooters alike.