Just how much fun can one have on the shooting range?  I venture to say you can’t really answer that question until you cross paths with the Slide Fire company: pair their new MOD stock with one of the most revered gun manufacturers in Smith and Wesson and you have the recipe for a bunch of giddy adults burning ammo at an unbelievable rate.

Can both rifle and stock hold up to such heavy-duty use, or is the recipe not for fun, but disaster? 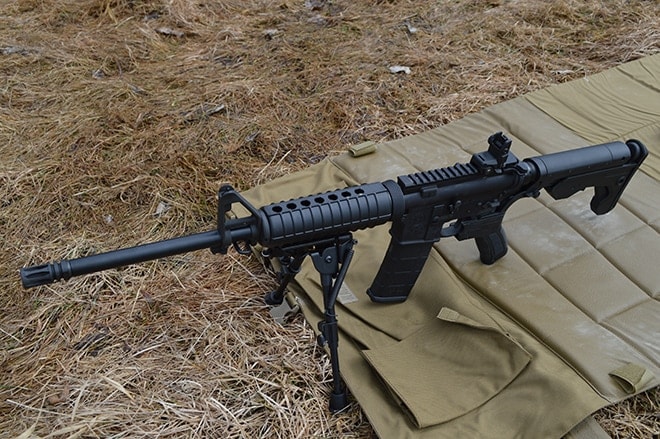 First, the gun.  The S&W MP-15 Sport is likely the most easily accessible, budget-friendly 5.56 modern sporting rifle on the market.  There’s an A2 post front sight and Magpul flip-up rear, still leaving enough picatinny rail space for another optic.  The aluminum receiver and steel barrel hold more appeal than many of the polymer-framed AR’s hanging in the market.  The milspec handguard is very basic, and is not metal-lined, but gets the job done.  Though there’s no lower rail for mounting a bipod, we easily added a sling stud mount. 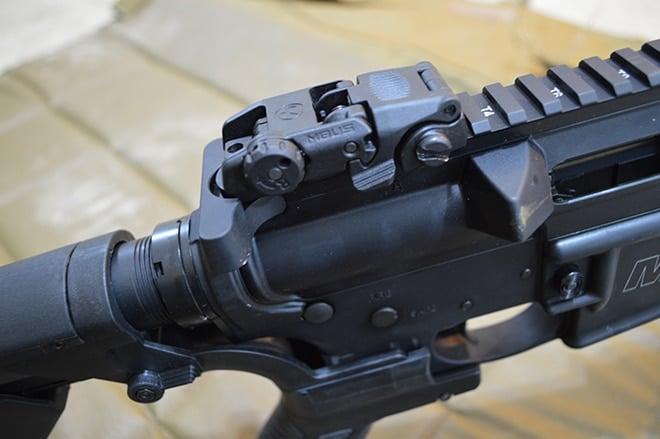 If you’re in the market for an AR-15 for plinking, recreation, customizing, or even competition, definitely check out the S&W M&P lineup. New for 2016 is the M&P-15 Sport II line of improved MSR’s, now including forward assist, a dust cover, and Armornite finish for only a slight increase in price.

All the Sport rifles come standard with one 30-round Magpul P-Mag. Both have a chromed gas key and bolt carrier, while the Sport II also chromes the firing pin.  Retail prices are around $675 for the original Sport, and $739 for the Sport II.  That puts real-world gun store prices close to $595 and $675 respectively.  Ask about anyone in the industry and they’ll tell you this is a lot of gun for the money. 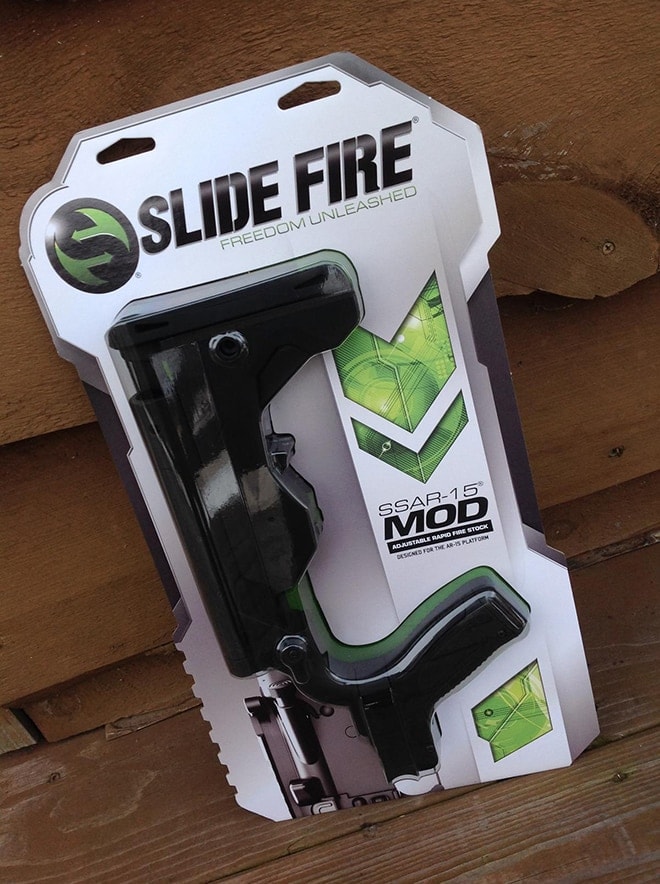 What is it? If you’re not familiar with bump-fire technology, bump-firing is a well-established capability that uses the recoil of a semi-automatic firearm like our S&W MP-15 to fire multiple shots in rapid succession. How can something so simple be so much fun?

The patented Slide Fire SSAR-15 MOD stock allows shooters to fire their rifles without compromising safety and accuracy.  Though there are now several competitors aping their design, the Slide Fire brand has been recognized as the original manufacturer of these types of systems, leading the way in innovation and quality. 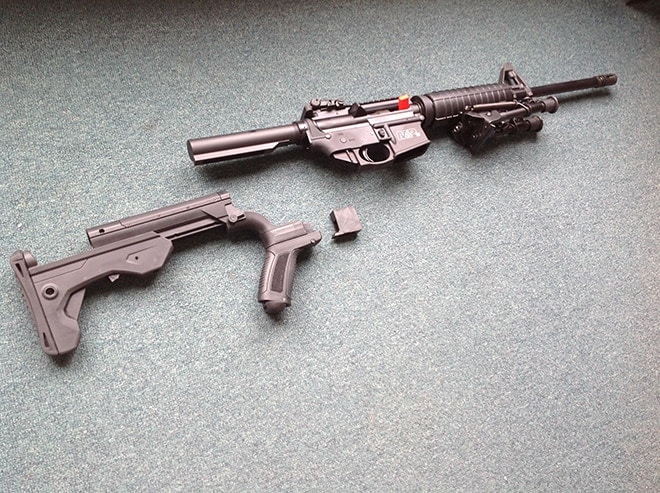 Detail of the components prior to installation. The SlideFire stock slips into place over the existing carbine buffer tube. (Photo: Kristin Alberts)

It’s obvious from the get go that the new SSAR-15 MOD stock is leaps and bounds better than its predecessors—the SBS and OGR.  Whereas earlier versions of Slide Fire AR stocks were built specifically for either left or right hand shooters, the current design accommodates both.  The stock is sleeker, sportier, length adjustable, has a QD mount and rubber pad, and will soon be available in flat dark earth as well as standard black. There are also now dual locking mechanisms in place of the old-style single lock system, which allow the stock to function as any normal 6-position AR buttstock.  This grants an even greater increase in accuracy potential. 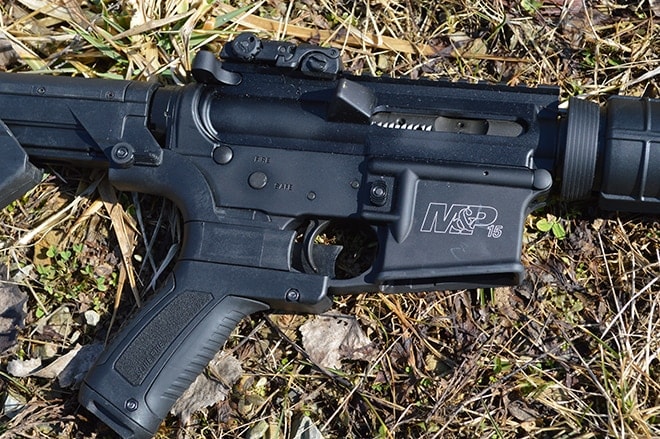 Detail of the S&W Sport showing how the trigger device rides in the stock. (Photo: Kristin Alberts)

With a retail price of 269.95, the MOD is accessible to most users and is completely legal and does not require the hassle and cost of NFA paperwork.  Slide Fire includes an ATF approval letter to be kept with the system to prove legality in case of any questions.

Installation of the SSAR-15 MOD on our S&W Sport rifle was incredibly simple.  Even starting with no knowledge of the system, our testers had no trouble completing setup within ten minutes. 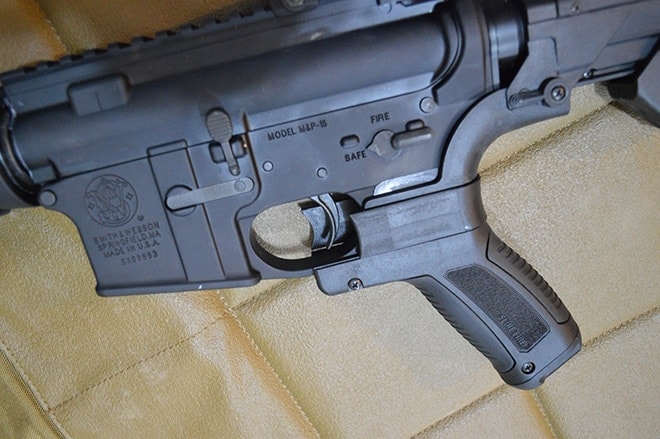 The finger pad rest is the key to the working the Slide Fire stock. (Photo: Kristin Alberts)

It’s as simple as removing the rifle’s existing pistol grip via a single bolt and replacing the grip with Slide Fire’s provided polymer interface block.  The existing stock is simply slid off the back of the buffer tube by lifting the stock’s adjustment lever.  The SSAR-15 Mod stock easily slides on in its place by pulling downward on the base of the integral pistol grip mechanism. 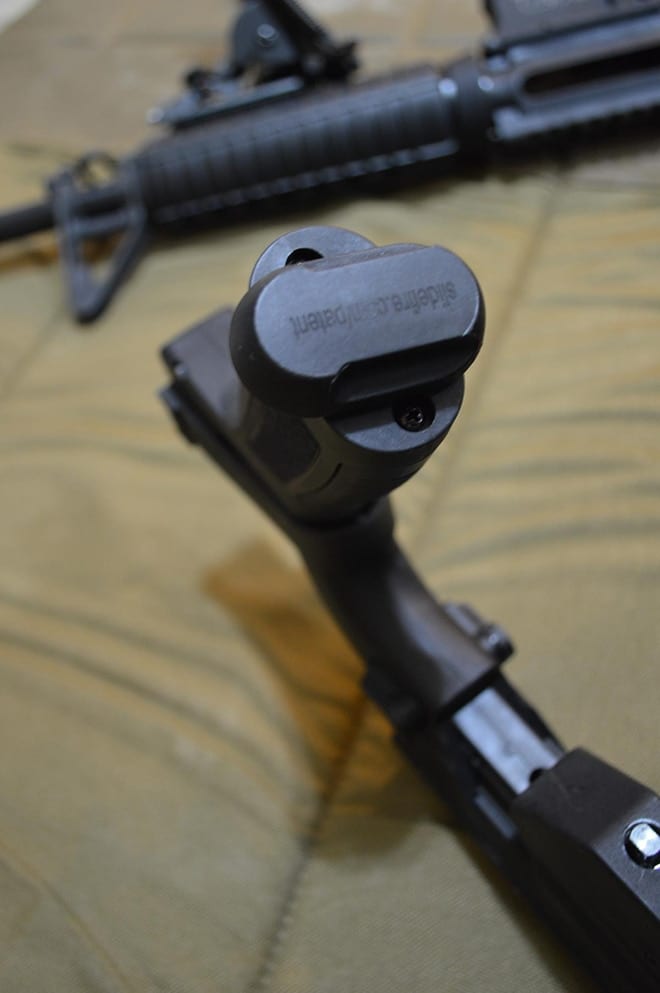 Detail on the twist mechanism at the base of the pistol grip. (Photo: Kristin Alberts)

Slide Fire SSAR-15 MOD stocks are compatible with any AR that has an adjustable carbine buffer tube. If your AR has a fixed stock or is otherwise not compatible, Slide Fire offers a conversion kit with a milspec six-position buffer tube, castle nut, carbine buffer, spring, and end plate for $59.  And if you want all your furniture to match, they make forends and have custom triggers as well. 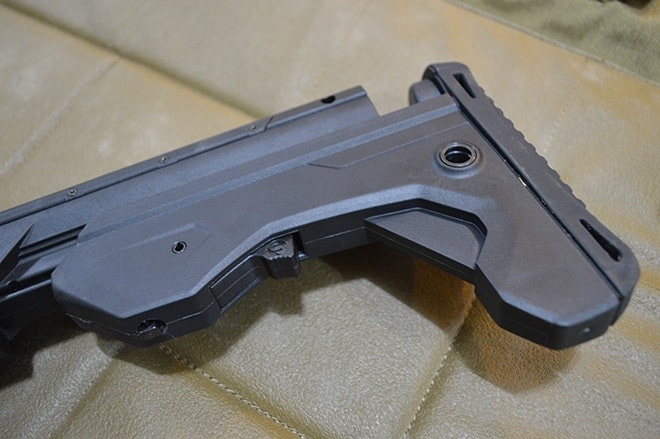 As the Slide Fire system is intended for milspec modern sporting rifles, users must ensure their rifle will comply.  In addition, it’s important to note that the company sells a trigger to optimize rapid-firing, as neither match-grade nor two-stage triggers will allow the system to reset and fire as successfully as it should.

The new 6-position buttstock and pistol grip with its Santoprene inserts is comfortable for just about any shooter.  Accuracy was just as you’d expect bumpfiring to be, essentially filling up silhouette targets when shooting from standing at 25 yards.  We shot FMJ reloads, Hornady V-Max, and Winchester white box, all with the same successful results. 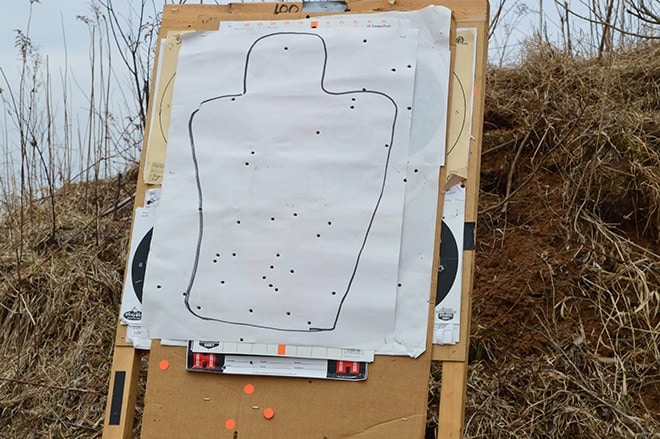 A target after 50 rounds of bump firing as quickly as possible from a distance of 25 yards. (Photo: Kristin Alberts)

Though accuracy from standing position in rapid fire was marginal for each shooter, the gun was nonetheless controllable in terms of muzzle rise.  Offhand, I would not consider this to be a tremendous defense weapon without intense practice and greater developed trust in the system. We had much greater accuracy and controllability when shooting prone using a bipod.  A longer bipod would make this practice much easier and would also allow for better mag-ground, or mag-bench clearance. 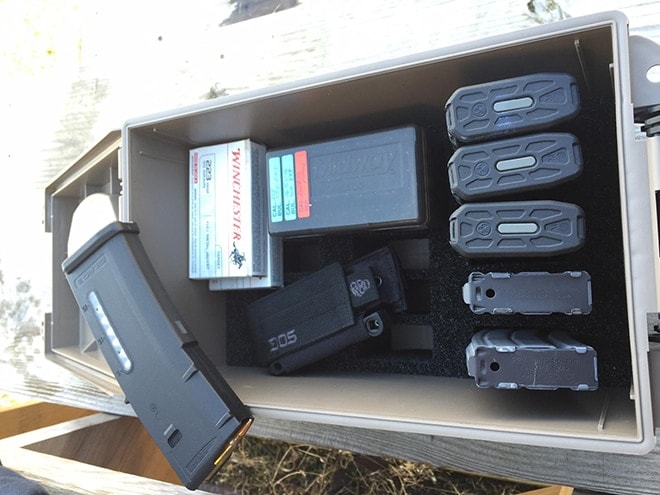 Between multiple testers, we easily ran 600 rounds through the gun with the SSAR MOD stock in place.  Though nobody buys the system to use it as a standard buttstock, we tested it that way as well.  With the dual locking mechanisms, there was no discernible wiggle, quite unlike Slide Fire’s earlier versions which rattled significantly even when locked.  With the improvements to the SSAR, there’s no functional reason against installing one on any AR in place of the original standard stock.  If you desire bumpfiring, it’s as simple as twisting the mechanism at the base of the integral pistol grip a half-turn.  If not, twist it back and use the stock as a comfortable, independent six-position.

Glitches in the field 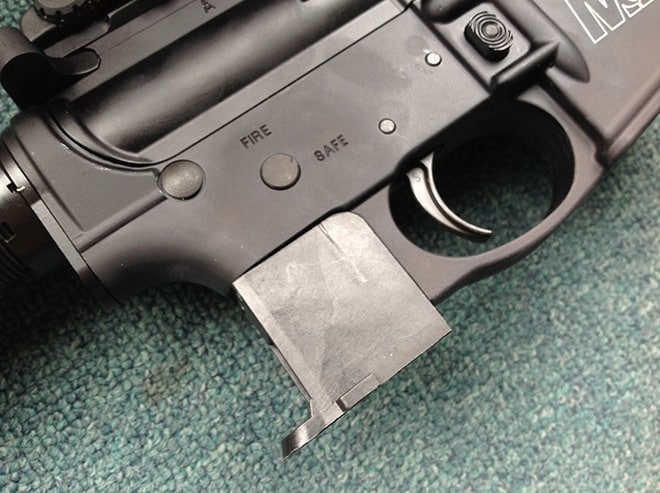 While we had plenty of fun with the Slide Fire, we also had a few issues.  Though installation is simple and use of the stock is fairly straightforward, there is a definite learning curve to being able to control two-or-three shot bursts versus emptying a mag in rapid fire fashion.  If you’re buying a Slide Fire, plan on burning through 300-500 rounds to get completely comfortable with the workability.

Also, we noticed upon installing the interface block which replaces the rifle’s pistol grip that there was significant drag when the Slide Fire stock slid back and forth over the block.  Though we did not initially notice any problems, after firing the first 200-300 rounds, we found the stock becoming more difficult to engage, requiring more force to pull forward on the forend. 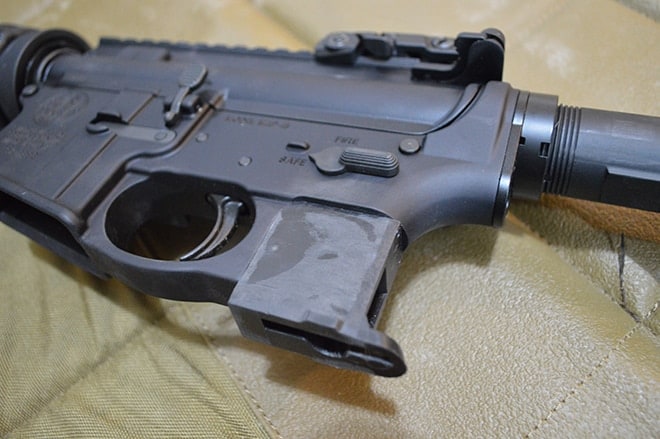 Everything still functioned as it should, though after completing that day’s range time of 400+ rounds, we disassembled the stock and rifle to find noticeable wear and drag marks on the interface block.  Whether this will affect long-term performance remains to be seen; however, it’s important to note that Slide Fire offers an aluminum interface block to replace the included polymer version. Priced at $30.95 on the company’s website, this looks like a very worthwhile upgrade if you plan on heavy-duty use of your system. 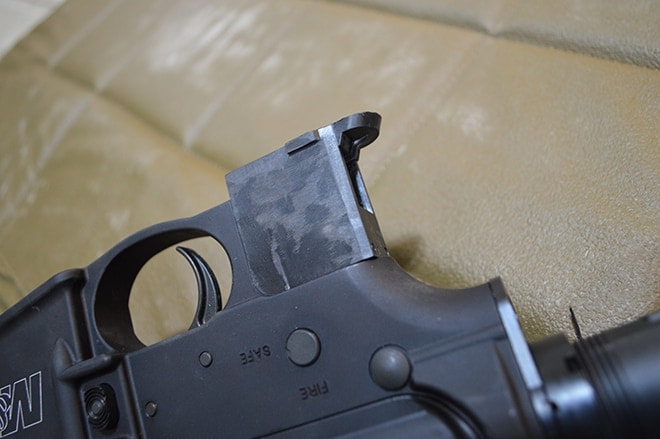 Wear detail on the opposite side of the interface block after 400 rounds. (Photo: Kristin Alberts)

It’s also important to note that rapid fire mag dumps cause very considerable heating of the rifle, especially to a standard-barrel AR.  There is some discussion that heavy fluted barrels may be more well suited to the high firing rate and heat dispersal.  If shooters use good common sense and allow the setup some time to cool occasionally during firing, rifles like the S&W Sport handle the job just fine. 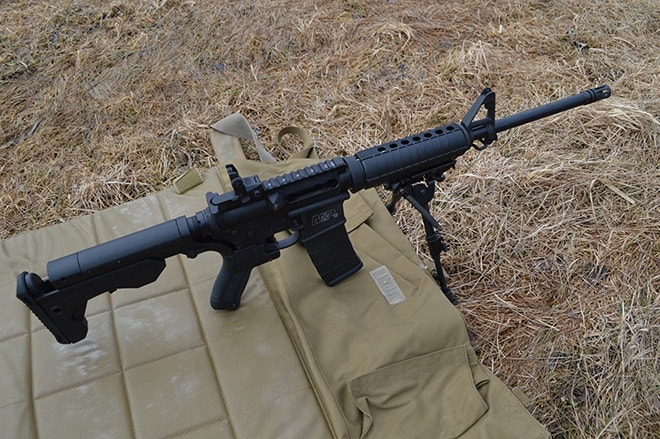 The S&W SlideFire setup excelled from the prone position using a bipod, though a taller bipod would be advantageous. (Photo: Kristin Alberts)

The S&W MP-15 Sport is one of the best buys for the money in the industry and is now even better with the introduction of the Sport II for not much more money.  The Sport rifles are reliable, customizable, and reasonable.  Naturally, it made a great pairing for us with the Slide Fire SSAR-15 MOD stock system.  This combination is as close as many gun-loving adults can come to playing in a toy store.  While the Slide Fire system may not have much use other than entertaining target time, it does that job with smiles all around the range.