Though I have a definite affinity for the crack of “pew pew,” I am the first to admit it’s a little tough on the ears. Even when sporting top of the line hearing protection, I still find there is a ringing in my head at the end of a long range visit and, for that reason, I love that there exists the option to pop a can on the end of a firearm and enjoy the “silence.”

Usually this means I have to provide both the threaded barrel and suppressor, but for this test, Springfield Armory took care of at least one part of that equation with the addition of two suppressor ready models in their popular XD line.  Outfitted with threaded barrels and available in 9mm Luger and .45 ACP, these XDs come ready to accept a silencer. All you need is a can and you’re in business; no extra parts required.

Even better than the original 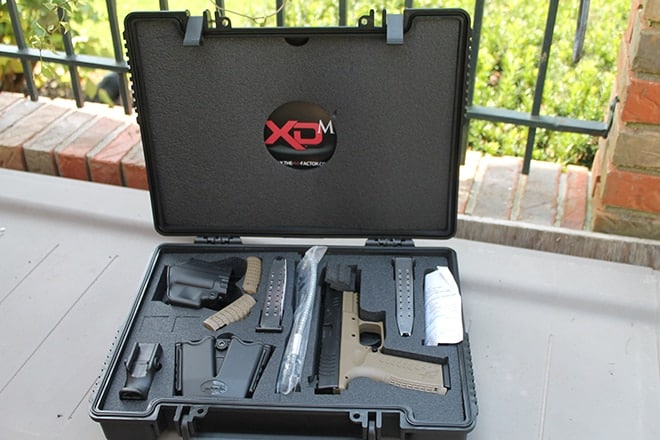 The suppressor ready line of XDs follows a similar format as the non-threaded XDs. A polymer body and a steel slide give a solid and sturdy feel to this firearm. Much like a Glock, you can abuse the XD and you’ll still get a reliable performance. I fed some questionable ammo through it and could not get a failure or malfunction.  It’s a rock solid build that continues to offer the 19+1 capacity that makes Springfield a favorite.

Despite being a full size pistol, it still fits in the hand nicely and doesn’t feel cumbersome to hold. Despite some slight differences and a threaded barrel, this XD surprisingly doesn’t feel heavier than the standard 9mm Luger version. In fact the suppressor ready model weighs the same as the 5-inch tactical model. 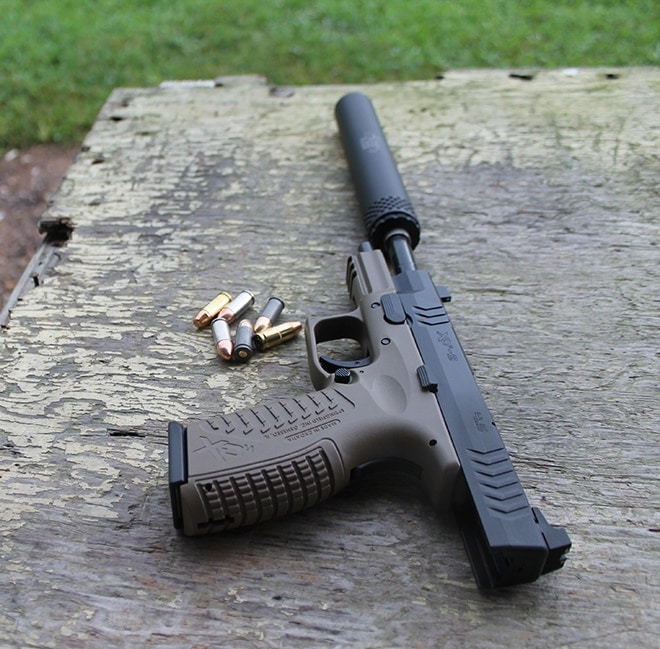 A long barrel means this XD is for the range, not easy CCW. (Photo: Jacki Billings)

Though it has some sensibilities of the regular XD line, there are a couple of features that set it apart from its sister. Most notably, this version houses one of the longest barrels on the XD series at 5.28-inches. Overall length comes in at 8.25-inches. You won’t be carrying this gun, but you’ll be pinging the center of your target.

Also a departure from the original line is the more tactically colored look. Termed “flat dark earth” the firearm sports a black slide and a dark tan body. While this does nothing for shooting, it certainly looks cool and will set you apart from all the other black-on-black firearms at the range.

Continuing down that path of tacti-cool, this XD also offers a Picatinny rail for accessories. While lasers and flashlights aren’t a necessity it’s certainly nice to have that option, especially if you’re eyeing this gun as a home defense firearm. 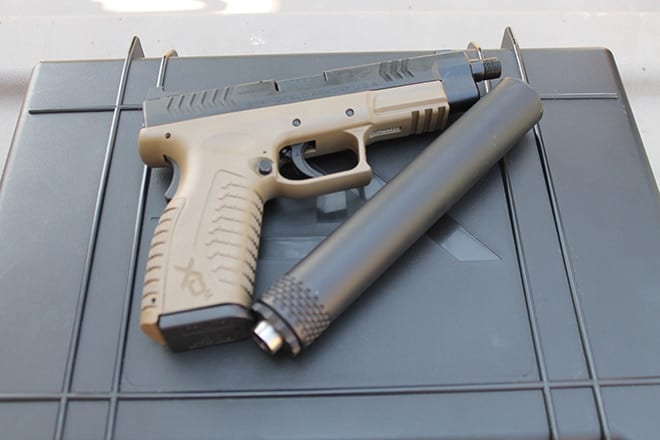 I used a Gemtech Tundra for this review though any concentric suppressor will do. (Photo: Jacki Billings)

The Gemtech Tundra, the silencer I paired with the XD for this review, usually hangs out with my Glock 17. It did spend some time on the Smith & Wesson M&P for another review, but you’ll usually see it with my Glock and KPOS set-up. The reason for this pairing is my suppressor is too tall for the stock sights on the Glock and it obstructs my view of the target.

When I unboxed this XD, I thought the sights looked raised and I was right. Springfield took out the guesswork of aiming with a can attached and added stock, raised 3-dot sights. As long as you’re shooting with a concentric silencer, you’ll be able to see the target over the can. While this seems like a small feature, it means a great deal to aim and improves the shooting experience. I personally like to hit where I aim and I like even more to be able to see where I’m aiming. This XD allows for both. 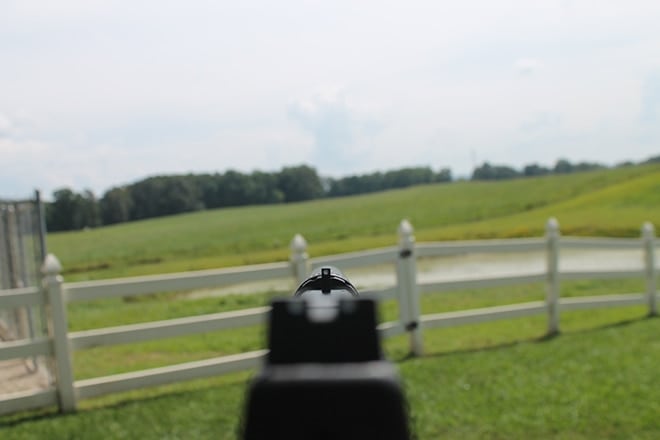 Close up of raised 3-dot sights. These sights allowed for more accurate shooting then I am used to with a can. (Photo: Jacki Billings)

Like most threaded barrels, the XD’s thread protector sits securely around the muzzle and must be unscrewed and removed to attach the silencer. Don’t lose this part, as you’ll want it to shoot unsuppressed. Once the protector is off and secured in a safe spot (I suggest the case) it’s time to fit the silencer. It’s as easy as a few twists and you’re in business.

As with any suppressor, over time it becomes loose on the firearm. When shooting suppressed, make sure you have an oven mitt or towel ready to re-tighten. I make it a habit to check the silencer out every magazine change and re-tighten as needed. At the end of suppressed shooting, make sure to reattach the thread protector. 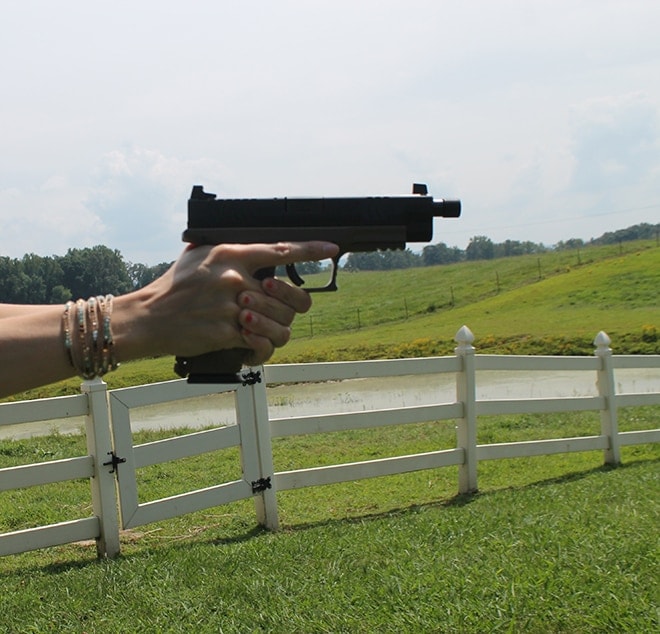 Unsuppressed, the XD performs at the same level expected from any pistol in the Springfield lineup. Whether it’s eating cheap ammo, expensive ammo, or the sometimes-questionable reloads, the XD excels at shooting and doesn’t seem to want to fail.

I knew beforehand that the XD is a solid weapon all on its own, but the addition of a suppressor pushes this gun into even better territory.  The combination of the firearm and the silencer equate to a undebatably fun range experience where everyone leaves with the ability to hear normally. 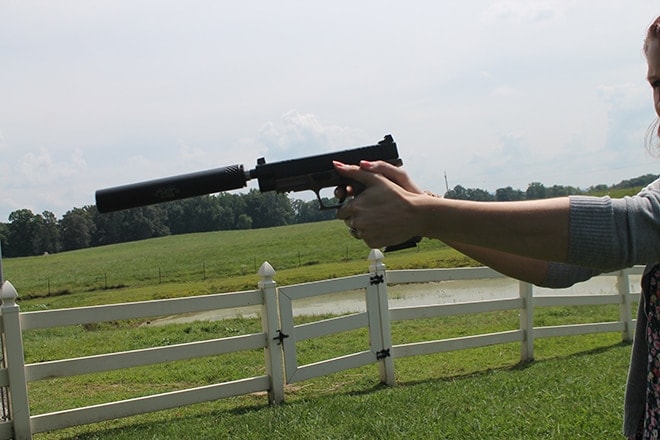 “Plink, plink” is much, much easier listening than “bang, bang” and if you were to totally forget your hearing protection while shooting, you would not be worse for wear. (In fact, you probably wouldn’t even notice you were missing your ears until a kindly RSO chastised you for not wearing them.)  Also, because the XD is such a nice, easy gun to shoot, I wanted to and did spend quite a bit of time on the range with it.  Trigger time, of course, develops better shooters.

From the average recoil to the smooth trigger to the lack of any malfunctions, I really cannot find any real flaws with this weapon and, in my opinion, handgun shooters of all experience and skill levels cannot go wrong investing in this gun. 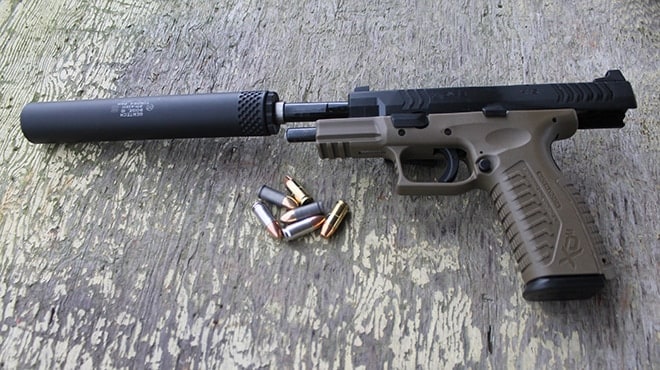 Give me a firearm that sports a 19+1 capacity, Picatinny rail and a threaded barrel and I’m game. Throw in Springfield’s reputation for making quality, reliable pistols at a decent price and you really can’t beat what Springfield has to offer in this line of XDs.  With a price that is on point, just $699 for the 9mm version, the suppressor ready Springfield XD is a must have for silencer supporters and home defense gurus.