Gun Review: Springfield XDS: A tool, not a toy

Back at the SHOT Show in January, Springfield Armory upped the ante in compact carry pistols in a huge way and for almost seven months now, the gun world has been buzzing about the XDS, the latest (and perhaps greatest) of the new polymer framed pocket-rockets.

As the other companies push to make their .380s and 9mms smaller, Springfield took it to the logical end.  The .45 ACP is, at least right now, just about the biggest practical semi-auto handgun round.  And now all of ya’ll who have been clamoring for something with a bit more punch than the 9mm have to, as they say in the parlance of our time, put up or shut up.

The XDS is a polymer framed .45 ACP.  Not completely unusual.  It is double action only (DAO).  What makes the XDS unique is the gun’s reasonably short length.  It has a 3.3-inch barrel in a frame that is only 6.3-inches.  Not all that small, comparatively, but small for a .45 ACP.  What makes it so noteworthy are the other dimensions – the frame and slide are less than an inch wide, and the pistol is just over four-inches tall.  The result is a very concealable .45 ACP. 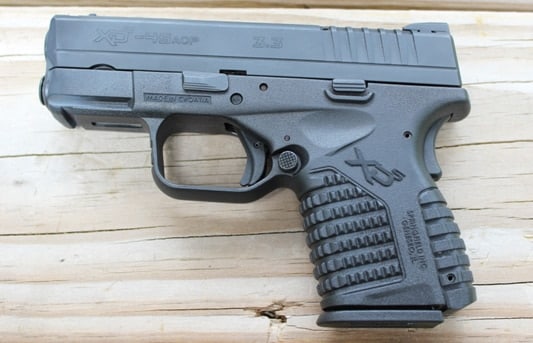 For many, I just said all I needed to say, but there’s more to talk about.  The XDS has an ambidextrous magazine release built into the gun.  The backstrap is replaceable.  The sights are solid – a good fiber optic front sight lines up between two white dots on the back.

The stainless magazines are really slick.  The smallest holds five rounds, though there are XD magazines (with convenient grip extensions) that hold seven.

So with one in the chamber, and five in the magazine, the XDS is on par with a revolver and much thinner.

It’s equipped with two functional safeties.  The grip safety blocks the trigger and the trigger has a built-in lever that must also be depressed for the trigger to engage.

Is it safe enough?  I think so, but I’m not a lawyer.  The safeties help to prevent mishandling, but won’t stop anyone who is holding it correctly from firing the gun.  I’m not complaining about this, mind you – it is a logical design for a compact carry pistol.  Not idiot proof, but safe.  And the safeties are always engaged when the gun isn’t being handled, and always off when the gun is held correctly.

How does it handle?

The kick isn’t what I thought it would be.  If you don’t hold on tight to the XDS, it will jump.  Grip it tightly, with two hands, and the kick is on par with most 9mms.  The springs on this gun are tight – they have to be – otherwise the recoil would beat the gun apart.

I put more than 300 rounds through the XDS in shortly under an hour, and I can just barely notice the pain in the web of my right hand.  The kick is nothing like that of a short barreled .357.  Nowhere near as bad.

The short magazine is noticeably short, yet sufficient.  The magazine length is one of the biggest selling points for this gun, as it disappears easily beneath an untucked shirt.  I had no problem holding the gun with two fingers.  My pinky has enough of a hold on the base of the magazine, but I found that I preferred to wrap it under, applying an upward pressure on the magazine’s base plate.

If there is a drawback to the short .45 ACP, it would be that repeat shots require much more steady concentration than they do with something like a .380.  Forgive me for making such an abstract comparison, but it’s apt.  There isn’t that much difference in the size – why not compare them?

There is something to think about here.  Though repeat shots require more of you as a shooter, if your first shot is placed well, you may not need another.  This is a big benefit over the .380, for sure. 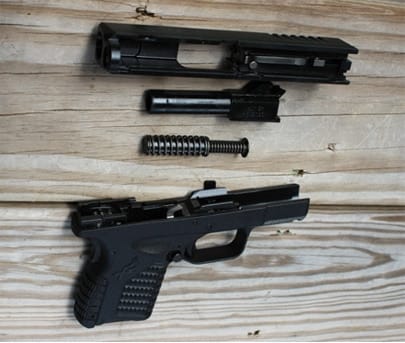 Shot placement is made much easier by the XDS’s light trigger pull.  The XDS breaks clean, and has a short reset.  The one I received for evaluation breaks just below five pounds.  Compared to most DAO pistols, this is incredibly light.  Many manufacturers use a hefty trigger pull as a de facto safety to prevent accidental discharge during the draw.  But this makes hitting what you’re aiming at more difficult, as pulling a heavy trigger often shifts point of aim.  Not the XDS.

Now that the super compact .45 ACP question has been answered, I know where the conversation will go.  Why not something bigger?  Something faster?  Why not make a compact .38 super?  And a semi-auto that would reliably cycle .44 magnums, or 12 gauge? Well, the .45 is enough.

This is what the Colt Commander always dreamed of being.  While it is similar in width, the Commander’s grips (like most 1911’s) are just not as concealable as people would like.

I’ve heard folks say that the XDS reminds them of the Glock 36, or 26.  I’m reminded of the Beretta Nano.  But the sheer size of the .45 ACP round still has me reeling.

I shot a number of different loads through the gun.  The XDS took it all.  The throated barrel is polished to a near mirror finish.  I had no failures to feed – no stovepipes.  If there was a problem at all, it is that the gun reacted differently to different loads.  Radically different.

PMC was shooting low.  American Eagle shot center left.  I shot a magazine of Hornady hollow-points that didn’t even hit the eight-inch target.

I think the lesson is that, with such a short barrel, the ammunition is going to matter more than it would if you were shooting through a five-inch 1911.  That’s the standard for the .45 ACP.  If this were my carry gun, which it just might turn out to be, I’d buy as many different types of .45 ACP, different grain weights and manufacturers, as I could, just to see what works best.  And then go with what works (Rest assured.  I’ll continue testing ammo, and report back on what I find).

With the American Eagle, I had no problem shooting three-inch groups from 20 feet.  I hit a gong at close to 25 yards (one out of five shots).  After the first few magazines, I could knock down bowling pins at 25 feet and 50 feet, though I often needed all five shots for four pins.

It has been said before, and bears repeating – this isn’t a target gun.  But no one will buy an XDS for plinking at the range.  This is a tool, not a toy.

Are you confident enough in your aim and training to rely on a .380?  Maybe you have a small frame yourself, and couldn’t hide the moderate size of the XDS.

A compact 9mm?  That has been the benchmark for a few years now, but the XDS, in my opinion, makes them obsolete.  Maybe the Beretta Nano, which is built like a tank, could be compared directly with the XDS.

But a truly compact .45 ACP!  This is the perfect combination of size and strength.  The XDS will make an ideal back-up weapon for many in the law enforcement community. 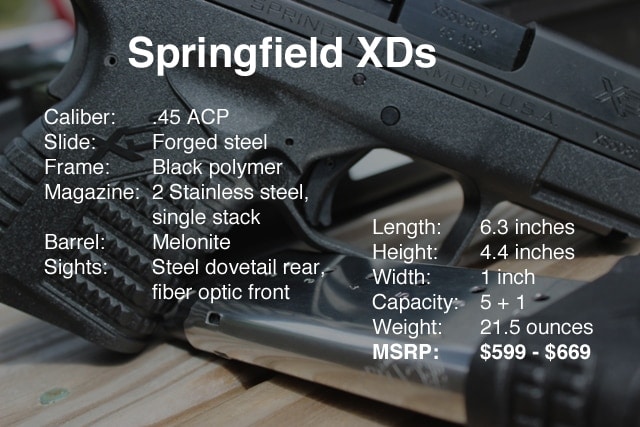 I began with a poker metaphor, and I’m going to end with one.  Springfield upped the ante.  It had been a friendly game.  I’ll see your .380, and raise you a 9mm.   And then Springfield pushed all their chips into the pile and the table got really quiet.

What’s it going to be?  Can anyone match the bet?  Who will be the first to fold?

I don’t care, really.  Once the dust settles, the XDS will probably sell for about $500.  And that’s going to be hard to beat.