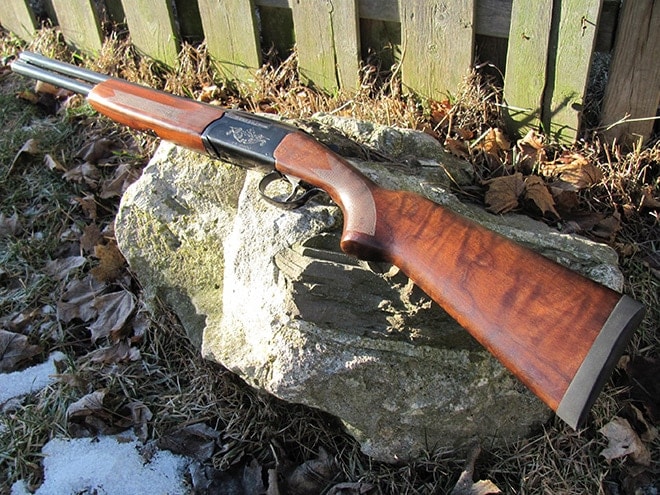 The shotgun market is flooded. There are items at all price points and a supply for almost every narrow niche. This supersaturation seems to force shotgun makers down one of two paths when developing new products: they either offer products that differentiate themselves to stand out from the throngs or they offer a familiar product at an aggressively low price.  I think Stoeger ended up taking the first path when developing the Condor Outback. The gun is nothing groundbreaking and not a budget gun, but at the same time it offers something very specific that nobody accidentally sets out to purchase. 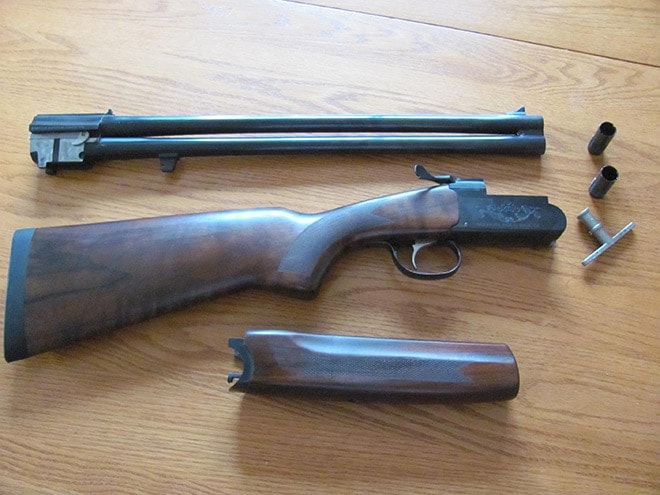 Stoeger’s line of Condor shotguns are over-under pattern firearms in twelve and twenty gauge. There’s a lots of variants available on the same basic design with specific purposes in mind, and the Condor Outback is notable in that it’s a short-barreled over-under. Not many of these are produced, and the only other ones that are tend to be marketed for home defense (for mysterious reasons). 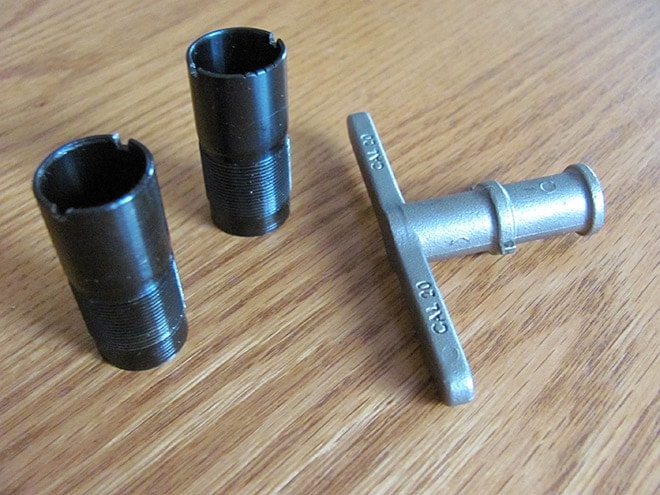 My Condor Outback is a twenty gauge model with 3” chambers, which sells for $500 MSRP. It’s available in a blued-steel and wood design or a black and chrome finish. The gun has a total length of 36 inches, a 14 inch length of pull, and weighs in at 6.5 pounds. The short barrels come in at 20 inches long and are threaded to accommodate chokes. The gun ships with an Improved Cylinder and Modified choke and a wrench for inserting them. 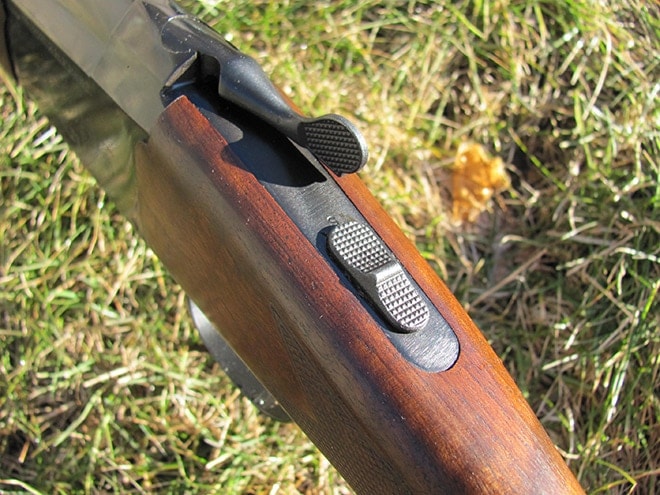 The controls are easy to manipulate but be advised the safety engages any time the gun is opened automatically. (Photo: Andy C)

The trigger is single, with no selector — the bottom chamber always fires first. The barrel assembly is fitted with basic extractors. Of note are the rifle-style fixed sights with a notch-and-post setup as opposed to the usual barrel-mounted bead sights, an interesting choice on this firearm.

The gun comes in a cardboard box with some instructions broken down into it’s three main components: forearm, barrels, and receiver. It had some light packing grease on it and not much else. Assembly takes about a minute once you get the forearm hooked onto the barrel assembly properly, and after a quick cleaning, the gun is ready to go.

The Outback exists in a twilight zone of price where you’re not paying for a high end premium double gun, but you’re also bypassing very serviceable basic shotguns at lower prices. When you first open the box, it’s not especially impressive. There’s nothing flashy but the workmanship is good. I looked things over carefully and didn’t find egregious machining marks, the finish is well-applied and even, and the wood looks nice with a proper sealant applied even on the checkering of the forearm (something a lot of manufacturers don’t bother with for whatever reason). The bluing is a practical application, not a mirror finish, but looks fine. There’s some engraving on the receiver that I could do without, but it’s inoffensive. 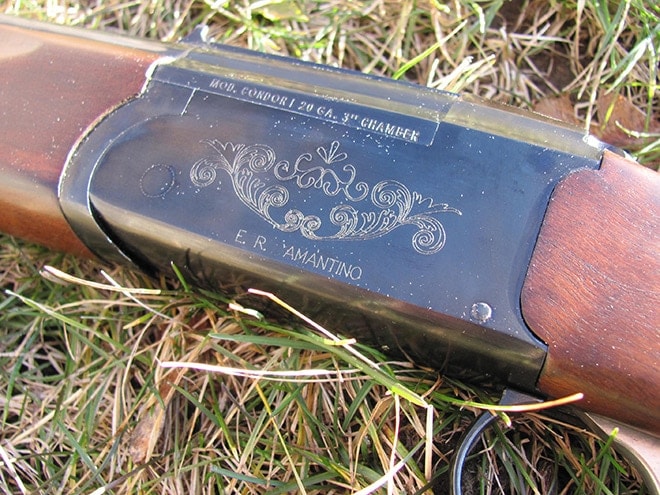 The take it or leave it engraving on the receiver. (Photo: Andy C)

I don’t mean to say these things to deride the gun aesthetically, only to note that it’s not spectacular. I personally think it looks great, and it definitely draws attention from other people as well. The short barrels with a classic color combination is just novel enough to turn heads.

It’s true that the Condor Outback isn’t wildly impressive initially, as the gun is mechanically basic. But it comes alive when you pick it up and you immediately remember why you purchased this particular gun — the over-under and short barrel combination. 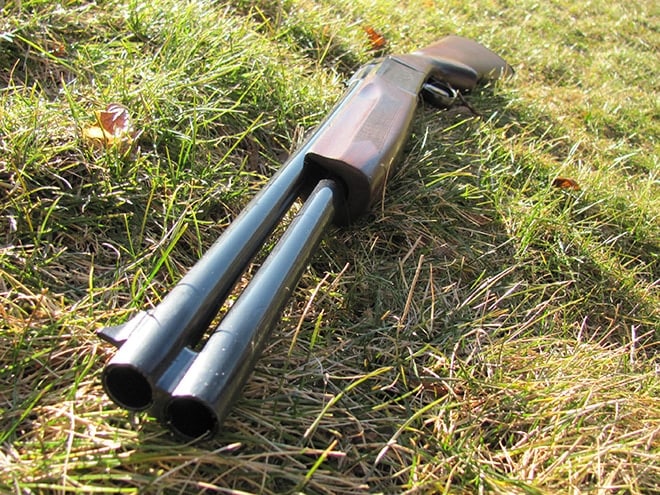 At first, it feels strange as the gun isn’t particularly light or heavy. The balance is shifted towards the center and it swings fast. It definitely takes some getting used to but you can quickly adjust with practice. Now I love it. The gun is nimble without giving you an excessive recoil impulse, allowing for solid secondary shots and a day of recreational shooting that won’t be cut short by a sore shoulder. 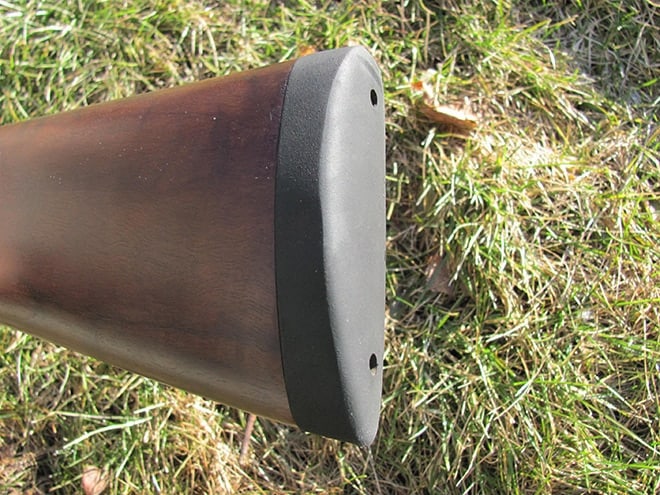 A generous and effective buttpad helps make the Condor easier to shoot, much to the disappointment of aftermarket buttpad producers. (Photo: Andy C)

Speaking of recoil, the Condor also thankfully includes a few creature comforts lower-end shotguns tend to leave out. A well made rubber recoil pad clings to your shoulder and helps with recoil. The trigger guard is large enough that gloved operation is no problem. The tang-mounted safety is also easy to engage or disengage with a flick of the thumb and large enough that it’s impossible to miss. While none of these things are innovative, they show the designers put thought into conditions the gun was likely to be used in as opposed to simply cutting anything possible to lower production cost. 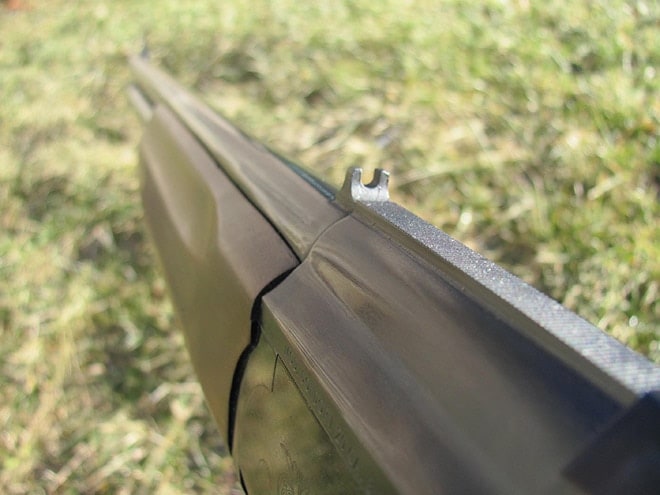 The sights, by contrast, are a bit of a headscratcher. I’m not sure why they chose rifle sights. It’s something to snag on, and I don’t imagine a lot of people going for a short-barreled twenty gauge over-under as their go-to slug gun. The rifle sights feel slower than the bead sight that accommodates highly reactionary shotgun shooting. While I don’t love their inclusion, they’re a bit like the balance of the Condor Outback in that you get used to it over time and it’s not an impairment.

I purchased this with an eye for deep-woods small game hunting, my favorite pastime. I’ve used a huge range of firearms in this pursuit, with all kinds of cartridges. In find myself preferring the twenty gauge shotgun in most cases as a versatile round that I can use on all kinds of creatures on foot or in flight. 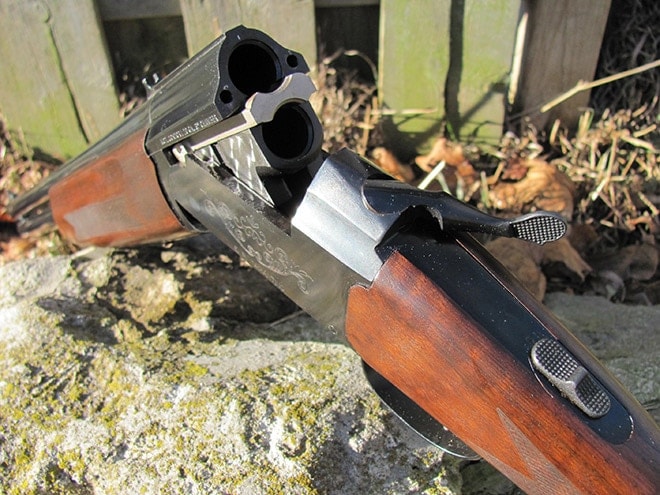 Extractors keep you from being that jerk who leaves their shells all over the woods. (Photo: Andy C)

Most of my hunting is done in reclaimed forest or thick bush, so a more compact gun that can do a bit of everything is ideal. After using a BL-22 for a year, I decided to switch to a shotgun for a season and gave the Condor Outback a chance. It has definitely met my expectations.

Finding the right weight of gun can be both literally and figuratively a balancing act.  I’m sure we’ve all heard the adage, most hunting firearms get carried a lot and shot a little, so lighter is better. Shotguns are sometimes given an exception to this rule as a very light shotgun’s swing can feel “off.” To me, the Outback’s 6.5 pounds is a fine compromise, providing some recoil absorbing properties and a good swing in a compact package. 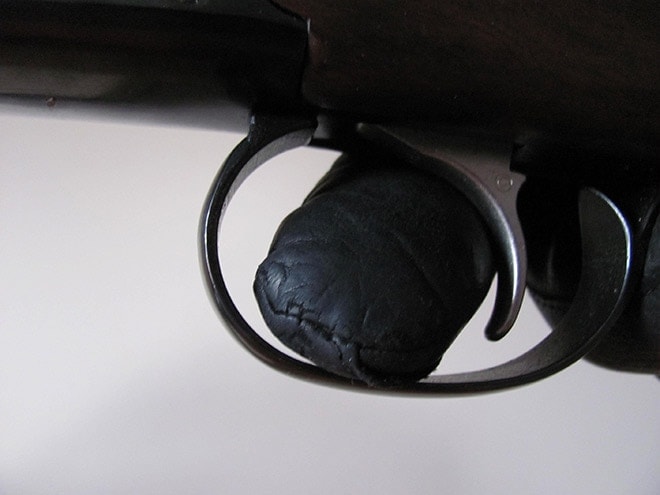 Compactness is the gun’s most distinct advantage. I’m still learning to accommodate its shorter length — I’ve even let some potential shots pass because I was used to my longer shotguns striking trees when swinging at a flushing grouse in the thick stuff. By the end of the season I definitely found myself more comfortable with the gun and I expect some bonus shots this year. It’s also just easier to move around with the Outback be it climbing, crawling, or getting into and out of silly positions that you often have to navigate in the bush.

In terms of actual shooting it’s unremarkable. The recoil is manageable, the trigger is average with a roughly five-pound break that has some slack, and the short barrel doesn’t affect spread much at the sub-30 yards I’m commonly shooting.

I have three complaints about the Outback in practice, none of which are dealbreakers. 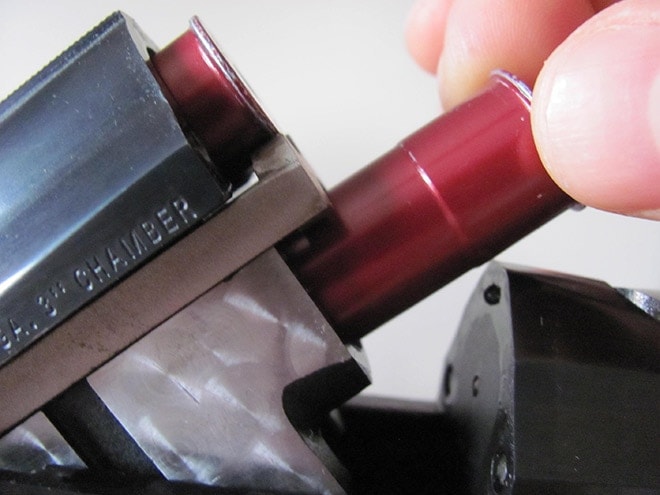 The first is that it doesn’t come with sling studs. It’s not hard to install your own, but this type of gun screams for them. I ended up using a tied-on sling for my first season and it was fine, but it seems like such a small thing for the maker to add, especially since it is something I’d imagine most users will want and need.

Second, the rifle sights aren’t optimal for this gun. There’s no way around that. I’ve adjusted, but I’d prefer a bead. The rifle sights don’t seem to play to this gun’s strengths so their addition confuses me. To be clear, the sights on the gun are ok. They work. They are just not what I’d prefer. 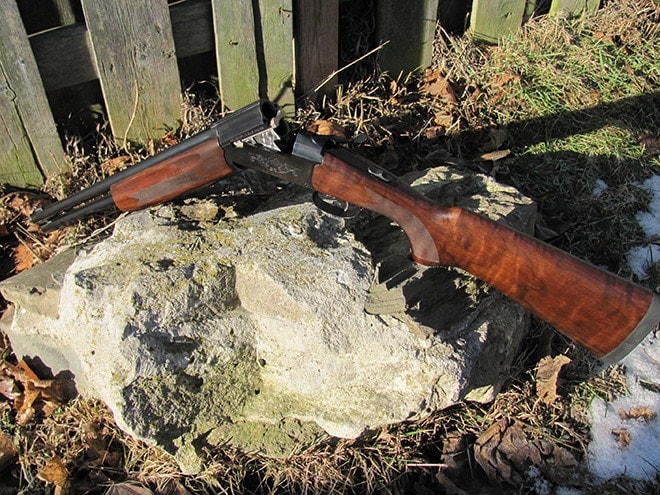 The break action on my Stoeger Condor Outback is still quite stiff after heavy use. (Photo: Andy C)

Third, the gun is still pretty stiff to break open, and the clearance to place or remove shells is a narrow angle. You’ll need to practice quite a bit if you have any desire to quickly load this thing. I’ve never had a stiffer break action gun, especially after plenty of use. I don’t think it’ll loosen up much more at this point without a trip to the gunsmith. This isn’t a huge complaint as I’m not going to use it for cowboy action shooting or anything (especially given the safety activates when the gun is opened), but it’s worth noting. 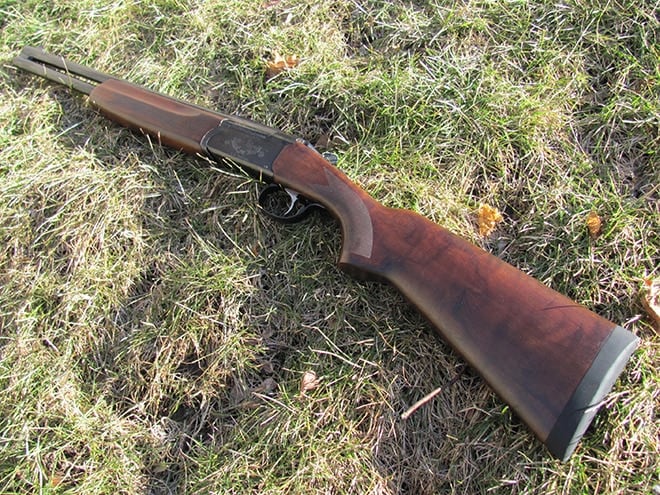 It’s safe to say I really like this gun. It works great for what I purchased it for. While it might seem like you can’t ask for much more, it’s important to consider your options before buying a Condor Outback. There’s tons of alternatives that might serve your specific purposes better. To me, this is a specialized firearm that you purchase with a specific intent in mind—specifically, close-range hunting. If you’re looking for a first shotgun for some general-purpose range shooting, planning to dabble in hunting, maybe some competition shooting, or you want something to keep close by for a bump in the night, this gun is trying to drive nails with a jeweler’s mallet. But if you know what you need and the Outback fits the bill, I recommend it highly.